Kylie Jenner and her sister Kendall pulled out all the stops to attend Justin Bieber’s Justice album release party at The Nice Guy in LA on Thursday.

The siblings, who are good friends with Justin’s model wife Hailey, made sure all eyes were on them in their very racy outfits.

Kylie, 23, made quite the fashion statement wearing a $1,095 LaQuan SmithCutout Velvet Bodysuit which had fabric in place to cover her modesty. 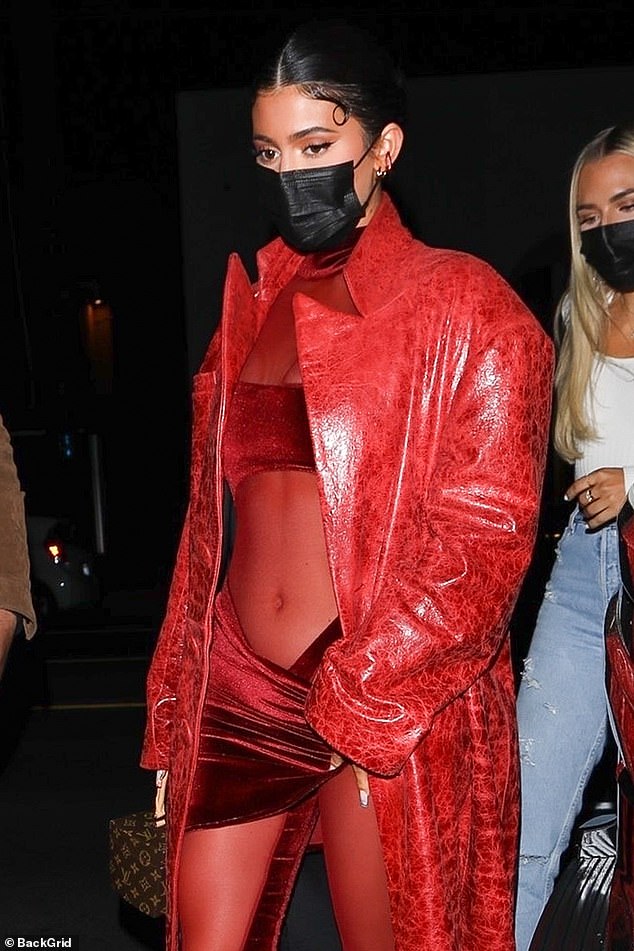 Daring: Kylie’s $1,095 LaQuan Smith Cutout Velvet Bodysuit gave an optical illusion and had carefully placed velvet to cover her up a little She teamed it with a bold red vinyl trench coat by Art School and matching red heels, carrying a Louis Vuitton vanity bag in hand, and also wore a face mask.

Kendall’s look was a little more conservative, with the runway model, 25, sporting a black mini skirt with a flower motif, a white T-shirt and knee high boots.

She completed her look with a leather jacket and was also sporting a face mask amid the coronavirus pandemic. 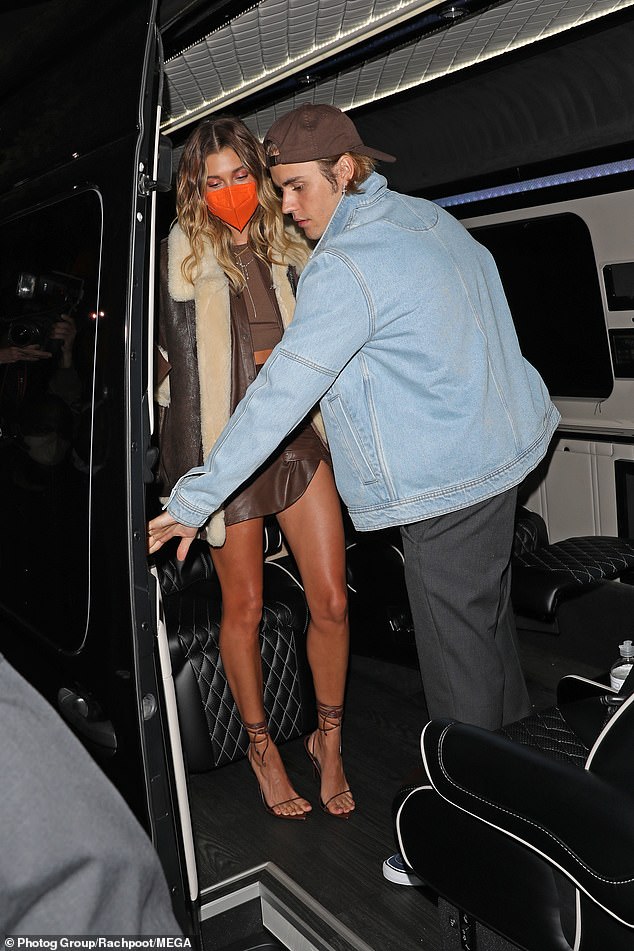 Justin’s look: Bieber stepped out wearing a grey shirt over a light blue denim jacket, as he helped his wife Hailey out of their vehicle

27-year-old Justin’s sixth studio album was released last Friday, though he and his 24-year-old wife were spotted arriving at The Nice Guy on Thursday night for the event.

Bieber stepped out wearing a grey shirt over a light blue denim jacket, as he helped his wife Hailey out of their vehicle.

He was also wearing a brown baseball cap backwards and grey pants with navy blue sneakers as he arrived at The Nice Guy. 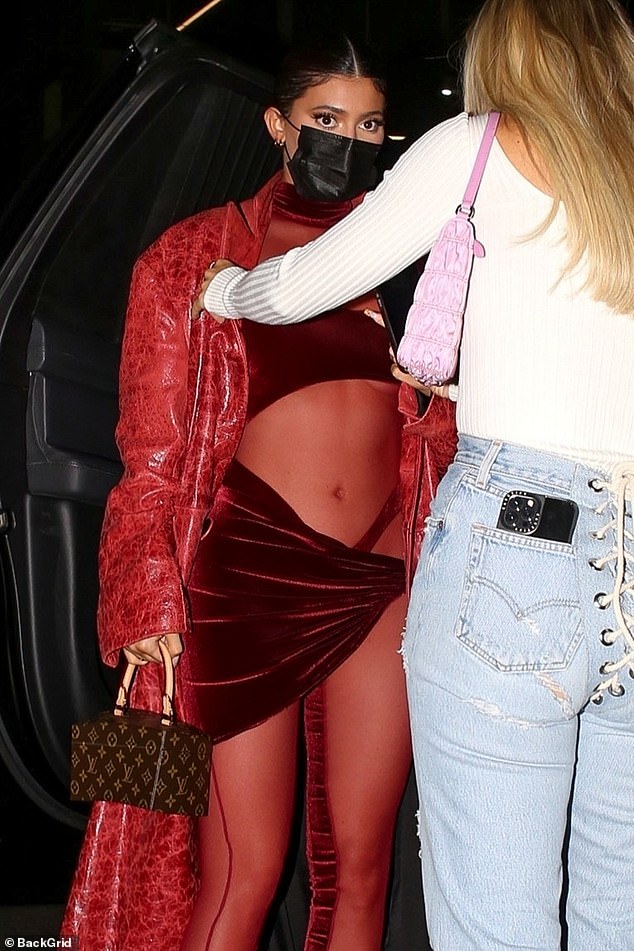 Staying safe: The cosmetics mogul did stay safe amid the COVID-19 pandemic with a black face mask covering her mouth and nose

Bieber’s wife wore a brown top that exposed part of her midriff and a matching brown skirt for the event.

She also wore a large brown fur-lined bomber coat with strappy heels as she exited the vehicle.

The model stayed safe amid the COVID-19 pandemic with an orange face mask covering her mouth and nose. 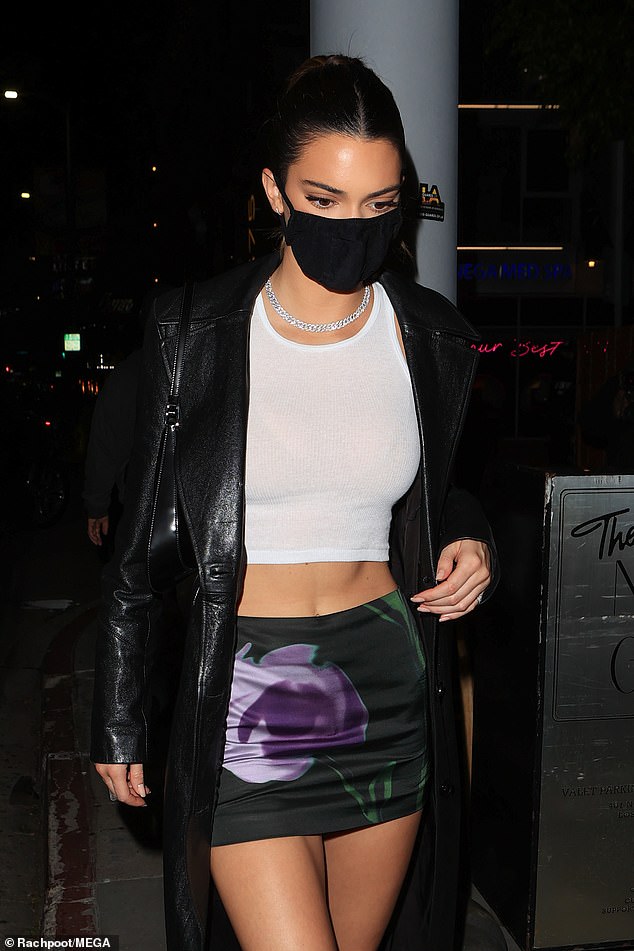 Casual Kendall: Kylie’s sister Kendall arrived in a much more casual look than her sister, opting for a white halter top and a black floral print mini-skirt

Safe: She also stayed safe amid COVID-19 with a black face mask, with a diamond-studded necklace around her neck 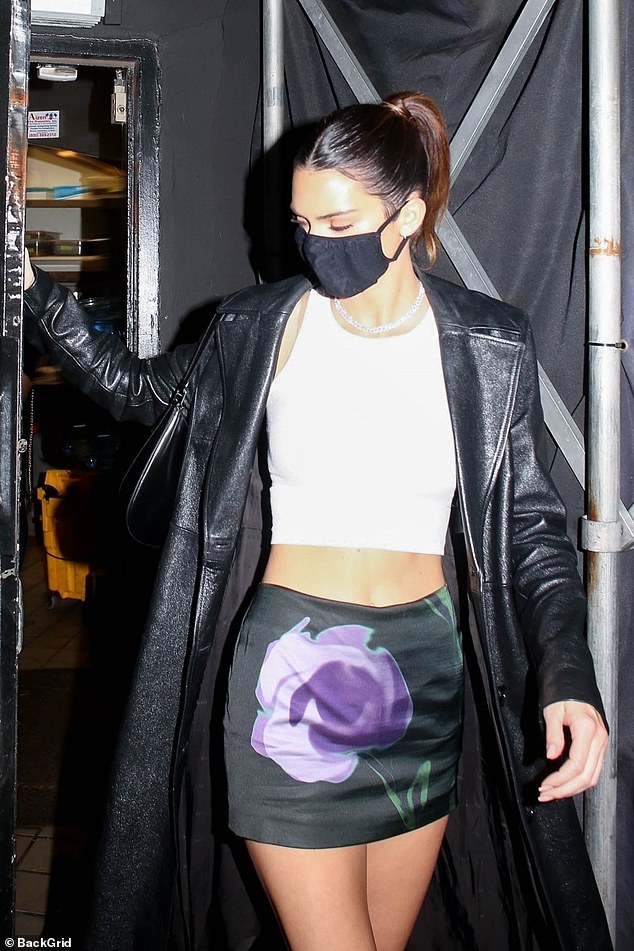 Polite: She held the door open for friends while leaving the venue later that night

Kylie’s outing comes just days after the billionaire came under fire after she asked her followers to pay for a makeup artist’s brain surgery after a car accident.

Jenner had chipped in $5K, but fans dragged her for donating such a small amount and asking fans to donate as well.

She clarified things with an Instagram post earlier this week, which she began, ‘I feel it’s important to clear up this false narrative that I’ve asked fans for money and am not paying for my makeup artist’s bills.’

‘Sam isn’t my makeup artist and unfortunately we don’t have a personal relationship anymore but I have worked with him a few years ago and think he’s the sweetest,’ she continued.

‘I saw my current makeup artist and friend Ariel’s post about Sam’s accident and his family’s GoFundMe and I called Ariel immediately to see what happened to Sam,’ she added.

‘After learning in more detail about the accident it compelled me to visit his GoFundMe which was set at 10K. They had already raised 6K so I put in 5K to reach their original goal and I thought I’d post on my stories to gain more awareness if anyone also felt compelled to share or donate,’ she added.

‘I don’t know how this all got so twisted but his family reached out through Ariel and are very appreciative of the donations, prayers and love towards Sam,’ she concluded.

Bieber hosted the private event to celebrate the launch of Justice, which was supported by five hit singles.

Other guests included The Kid Laroi, who is one of the featured artists on the album.

Jaden Smith was also in attendance, also staying safe amid COVID-19 with a black facemask. 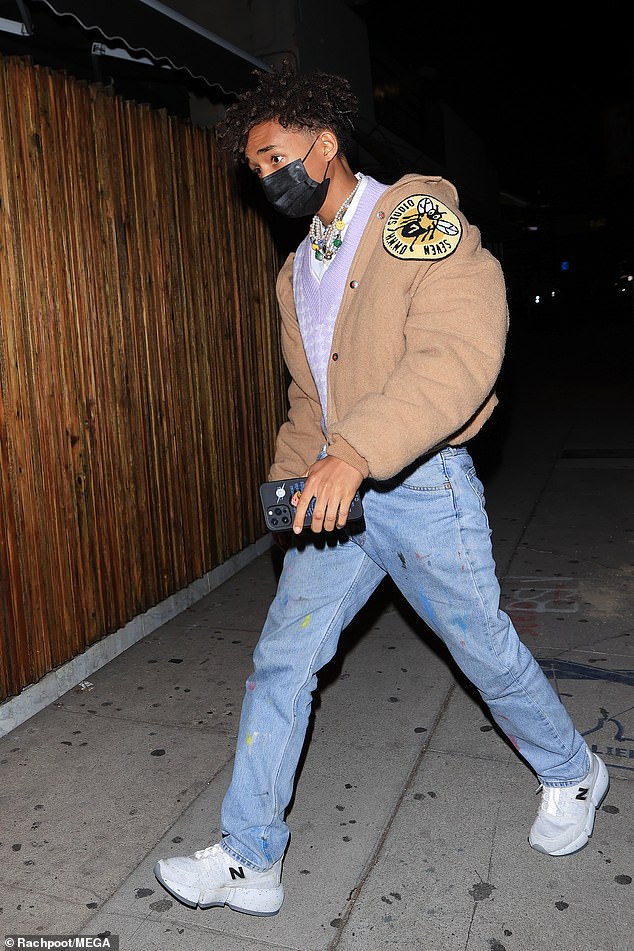