Home » Lacey Chabert: Why Her New Movie ‘Sweet Carolina’ Is A ‘Departure’ From Past Hallmark Films

Lacey Chabert spoke EXCLUSIVELY with HL about why her new Hallmark movie is so special to her, being more ‘vulnerable’ onscreen, and the film’s love story.

Sweet Carolina isn’t just Lacey Chabert’s 26th Hallmark movie. The uplifting film, premiering May 15 at 9 p.m. ET on Hallmark Channel, holds a very special place in her heart. In addition to starring in the Hallmark movie, Lacey is also an executive producer and was part of the creative process from the very beginning.

The movie follows Josie, played by Chabert, who suffers a tragic loss and unexpectedly becomes the guardian of her sister’s kids.  HollywoodLife got EXCLUSIVE scoop from Lacey about why this film is different from her previous Hallmark films. The actress also revealed she always had co-star Tyler Hynes in mind for the role of Cooper and so much more. 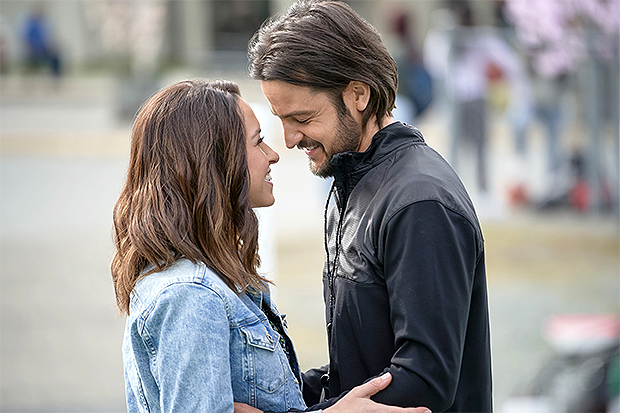 Why is Sweet Carolina so special to you?
Lacey Chabert: Well, I wanted to tell a bit more of a dramatic story. Unfortunately, this is a premise that many people can relate to. But in keeping with what Hallmark does so well, it was most important to me that, through tragedy, these characters find hope and learn how to put one foot in front of the other and move forward. I’m really passionate about this one. It’s one that I created with Jonathan Prince and produced and starred in. It was quite an undertaking, but I’m so proud of it. We just put our whole hearts into this one, and I just hope the audience enjoys it.

What was the creative process like for you with this movie?
Lacey Chabert: I sort of started developing it about two and a half years ago, and it’s taken that long to see it come to fruition. I’m just so thankful to Hallmark for the opportunity to have such a strong voice in the projects that I do with them and to be allowed to be a creator on something and walk this road. I’m just really thankful for the opportunity. I just finished my 27th movie with them. This was my 26th, and I did another one right after. My goal is always to make each one better than the last and to try and tell different types of stories. I was excited because this was a bit of a departure from some of the other ones I’ve done.

Why were you inspired by Josie and her story?
Lacey Chabert: She moved away from her hometown and moved to New York City. She has a big life there and is very successful. She has goals and is very driven. This tragedy happens, and her life gets turned a bit upside down. To her surprise, her sister, who is her best friend, had chosen her to be the guardian of the children in the off chance this awful event ever occur. I just appreciate her journey of suddenly being a mom unexpectedly. It’s very humbling and hard for her to admit that she’s really not very good at it in the beginning and is finding her bearings. It’s also learning to live as a daughter with her parents again and having her parents be more involved in her life. She’s trying to juggle the life that she created for herself in New York with the one that she has now been presented with. And also the reminiscing, and her going back to high school. Her high school boyfriend is the kids’ basketball coach. I love the feeling that I hope people get in those scenes where Cooper and Josie are together. This is a very specific feeling you get with someone who was with you at that time in your life in high school. Just all the memories that flood back, and the walk down memory lane. He really helps her dig deep and remember who she is as she takes on these challenges.

She’s also balancing taking care of her sister’s kids while also mourning her sister. That has to be a difficult balancing act for Josie.
Lacey Chabert: Yes, it’s an incredibly difficult balancing act for her. She must move on for the kids’ sake, but she’s also dealing with mourning her sister’s loss. We were also very mindful that I didn’t want to create a movie where my character cries in every scene or it was dark or depressing. The very tragic event is the catalyst of the story, and we do our best to be very delicate about it but also truthful at the same time. It’s not just a sad movie. There’s a lot of joy in the movie, a lot of happy moments, a lot of levity in being a parent unexpectedly, and revisiting your high school days and friends.

You worked with Tyler in the movie Winter In Vail. Were you thinking of him when crafting the character of Cooper?
Lacey Chabert: I was. When we created the story, I was thinking of him for it. He’s such a good actor, and he has such depth in his work. I knew he would be grounded and bring the emotional depth that I hoped his character would bring. He did such a wonderful job and was such an awesome collaborator.

What do you love most about Josie and Cooper’s relationship?
Lacey Chabert: I love the what-if where they both wonder what would have happened had she not left town. What would have happened had their life taken a different path? I think that’s a question that a lot of people ask themselves. I love that when they’re in each other’s presence it’s like they’re transported back to high school. It’s such a specific feeling that you just had to have been there. That’s the feeling I get when I’m with friends from that time in my life. You share the stories, you share the memories, and it’s something that was special if you were there to have experienced it. He serves a really important purpose. It’s not just about walking down memory lane. He reminds her of who she is and why she can take on being the kids’ guardian and why she should. He helps her come to that decision herself. 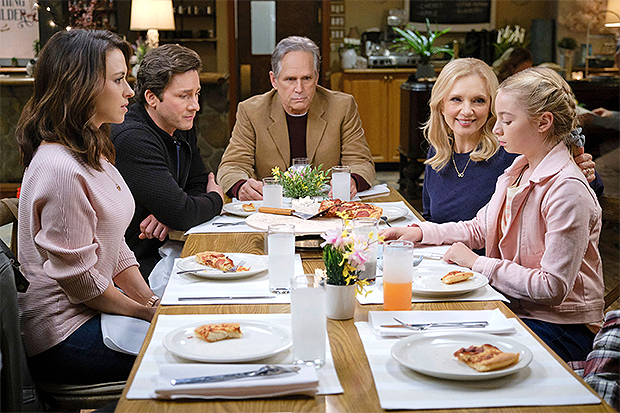 Sweet Carolina has a lot more vulnerable moments than your previous Hallmark films. What was it like exploring that side of yourself a little bit more onscreen?
Lacey Chabert: As an actress, it’s exciting for me to face a challenge and to have to dig deep, but it’s also scary. It’s scary to be that vulnerable and to cry and to open your heart in that way. Peter Benson directed it, and he’s also an actor and a director I’ve worked with on Crossword Mysteries. I knew he was the right person for it because since he’s an actor, he just directs from an actor’s point of view. He was a wonderful guide through the whole process.

What do you hope viewers take away from this new Hallmark movie?
Lacey Chabert: I always hope to bring a character to life in a way that they can relate to and see parts of themselves in. That’s definitely one of my biggest goals in these movies, so I hope that they see themselves reflected in Josie and the entire family. At the end of the day, I hope that at the end of these two hours, they’re left feeling some hope.

What’s something you learned about yourself as you embraced Josie’s story?
Lacey Chabert: I’ve learned a lot about myself I think in this past year in general. Taking on the responsibility of really being involved in every facet of this project, I learned that I just won’t take no for an answer when I really care about something and care about protecting it, whether that be a person or a project. I learned that I need to be better at asking for help, which my character also learns. There’s no shame in saying you can’t do it all. I’ve learned perseverance through the process of getting this project made. It took years for it to come to fruition, and I’m so thankful for our wonderful executives at Hallmark. When you really believe in something, it’s worth putting it all out there, and the rest is out of your control.

Are you hoping to do more Hallmark movies like this in the future?
Lacey Chabert: I am. I want to mix it up as much as possible, and I’m thankful that we have that freedom at Hallmark. I think they’re really expanding the types of stories that they tell. I also just completed The Wedding Veil trilogy, which was another project that I have been involved with for a few years. It was really important to me to help bring it to life because it’s the first time I’ve ever been in another Hallmark movie with other actresses from the network. My Hallmark peers or sisters, whatever you’d like to say, Alison Sweeney and Autumn Reeser, are also in those movies. We’re each going to be in each other’s movies. Each person also has a movie that they’re carrying that’s centered around their character, so it’s a trilogy of films that we’re all in. There’s a magical element to this wedding veil that we find. There’s a really beautiful legend that comes along with the veil. It’s also a very romantic movie about falling in love.