‘I got into the zone’: Lauren Goodger reveals her waters broke 10 minutes after a reflexology session and gushes she and beau Charles Drury are a ‘team’ following baby Larose’s birth

Lauren Goodger has shared more details about her homebirth, revealing her waters broke just 10 minutes after a reflexology session

The reality star, 34, welcomed 8lb 9oz Larose on July 20 with beau Charles Drury, 24, and only used gas and air during her seven-hour labour.

Answering fans’ questions in a Q&A session on Instagram on Monday, the new mum told how she used a birthing pool but ‘actually gave birth standing up’ and ‘got into the zone’ to deal with the pain of contractions. 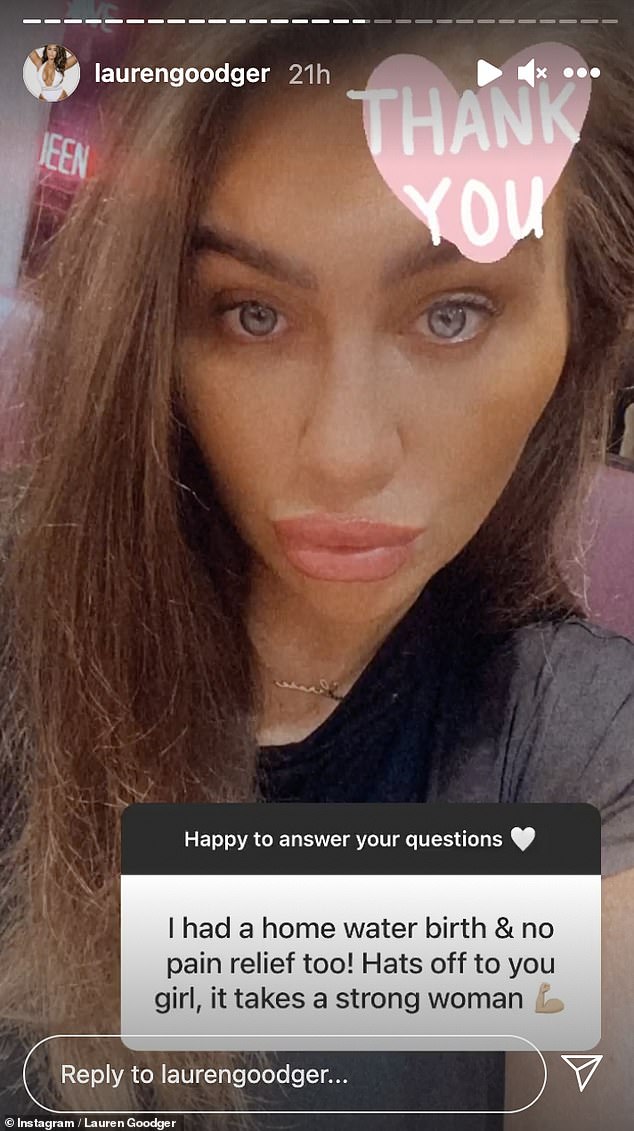 New mum: Lauren Goodger has shared more details about her homebirth, revealing her waters broke just 10 minutes after a reflexology session and she ‘got into the zone’ while in labour

Sharing details about her labour, Lauren revealed: ‘My waters broke 10 mins after this reflexology session with @lrussreflex. She is amazing and I highly recommend her!’

Reflexology is a type of massage that involves applying pressure to the feet or hands. It is used to try and aid relaxation and reduce anxiety, pain, nausea.

Lauren later told another fan that she went into labour ‘four days early’ and Larose was born ‘three days early’.

And when asked what Larose was like being born in water, Lauren explained: ‘I actually gave birth standing up… so the last part I pushed her out standing up’. 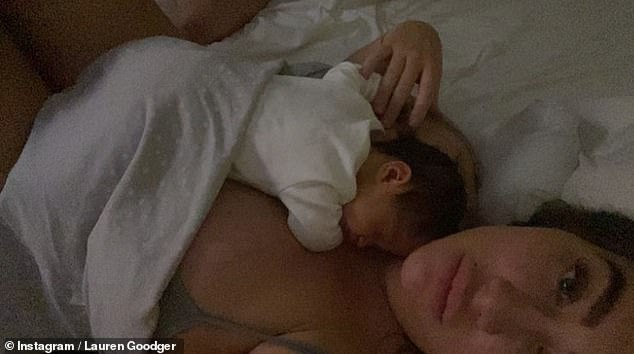 Mother and daughter: The reality star, 34, welcomed 8lb 9oz Larose on July 20 with beau Charles Drury, 24, and only used gas and air during her seven-hour labour 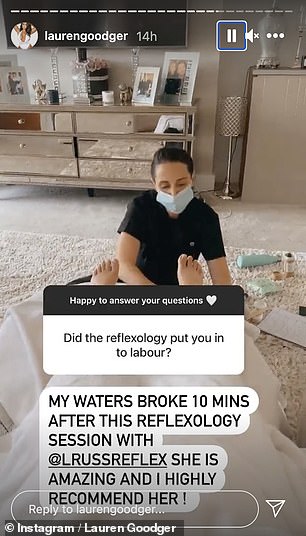 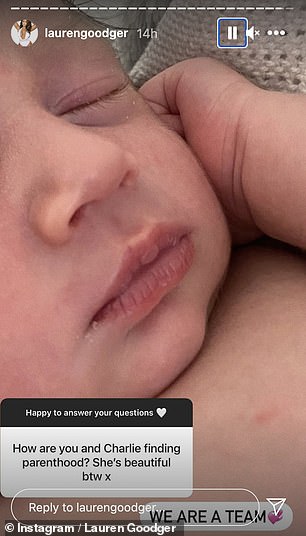 Details: Lauren revealed her waters broke very quickly after having reflexology (left) and explained (right) that she actually gave birth to her adorable little girl while standing up

Lauren also chatted about how she and Charles are adapting to life as a family-of-three, saying that they’re ‘a team’ alongside an adorable picture of Larose’s face.

Other followers of the former TOWIE star asked what the biggest lesson she’s learnt since becoming a mum is, with Lauren telling them that she’s just soaking up time with her daughter at the moment.

While another fan asked how Lauren ‘stayed positive and strong’, with the doting mum saying she just stayed focused on meeting her little girl.

She replied: ‘I just got into my zone and took each contraction as it came and each one brought me closer to my daughter’. 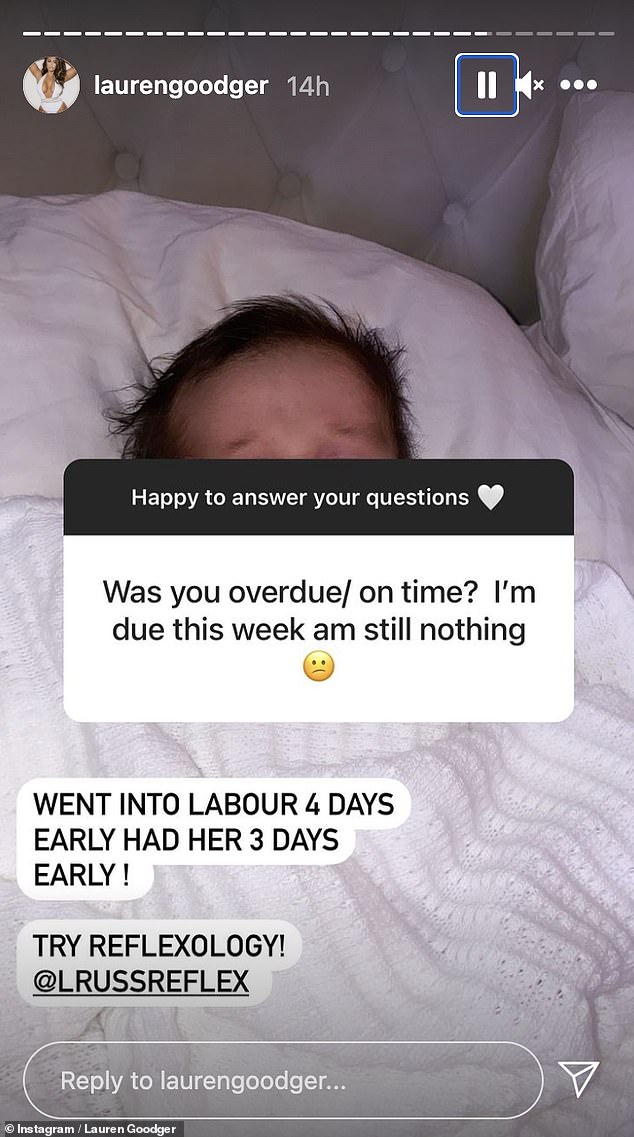 Timing: The new mum told her fans that Larose arrived three days ahead of schedule 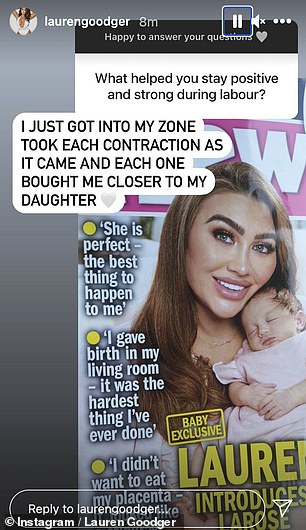 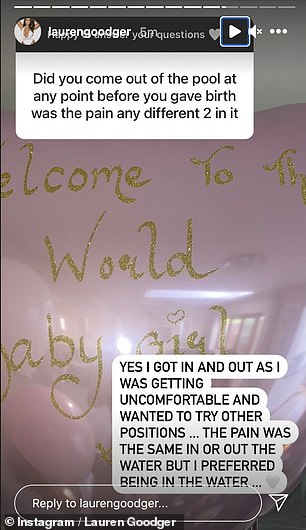 ‘I just got into my zone’: The reality star also spoke about dealing with the pain (left) as it got her ‘closer’ to meeting Larose and trying different positions (right) to see if that helped at all

She replied: ‘None as of yet. I just love every single minute with her… she is my life’.

Elsewhere in her Q&A, Lauren discussed moving around during labour and how she got ‘in and out as she was getting uncomfortable and wanted to try other positions’.

She added: ‘The pain was the same in or out the water but I preferred being in the water’. 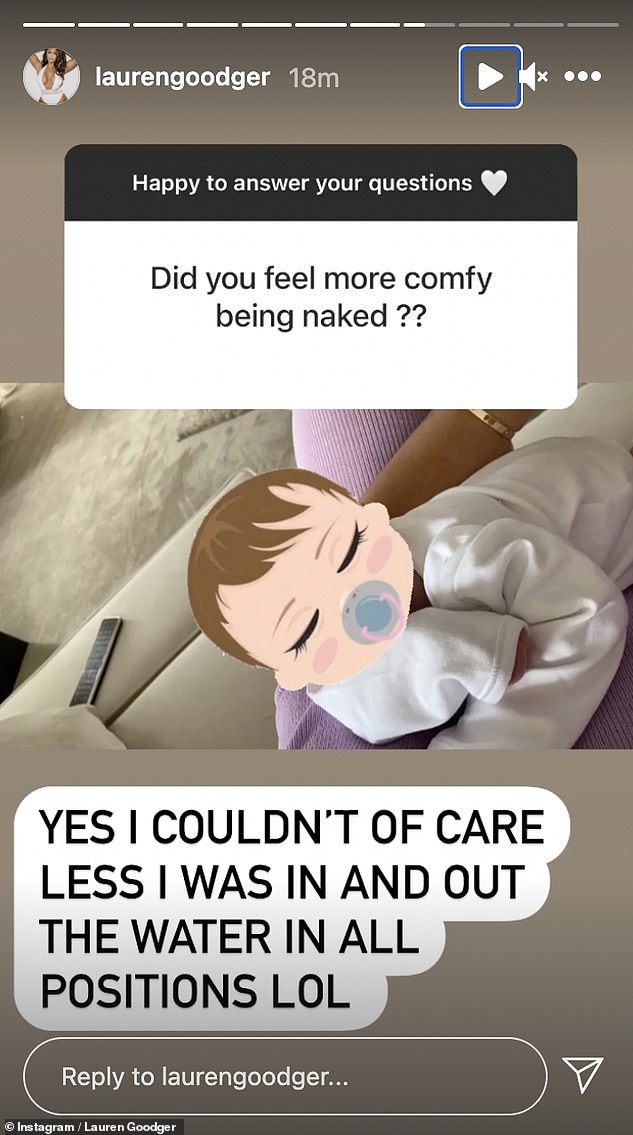 Candid: Lauren also revealed she ‘couldn’t of cared less’ about being naked during the delivery and moved around by getting in and out of the birthing pool while in labour 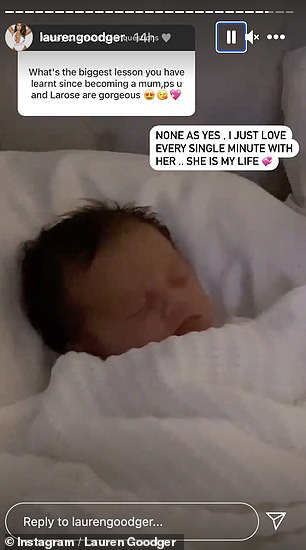 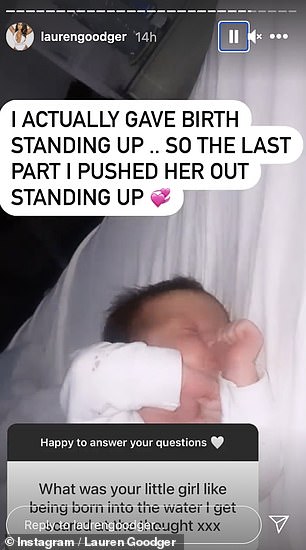 Adorable: As well as answering questions about her labour, Lauren shared a few beautiful snaps of her little girl laying in a bed 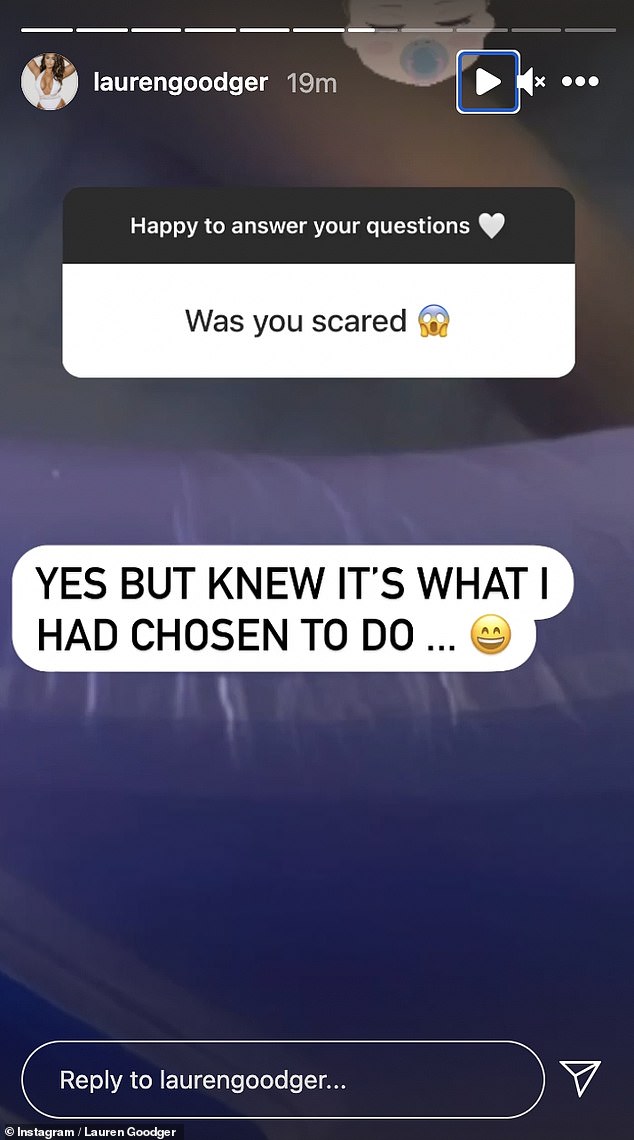 Open: Lauren also told one fan that she was ‘scared’ but ‘knew it’s what I had chosen to do’

Lauren was also asked if she’d ‘do it all again’ and have another child, with the star admitting that as ‘each day goes by and I am healing, yes I prob will do it all again’.

The new mum also chatted about doing a hypnobirthing course to help her prepare and said next time she’ll ‘take more time’ for herself as she was busy with work before Larose’s arrival.

As well as answering fans’ questions, Lauren also shared a selection of new snaps alongside her answers, including one of herself in the birthing pool.

Taking to Instagram on Monday, the new mum posted a naked snap of herself during the home birth which was adorned with a selection of appropriately chosen emojis. 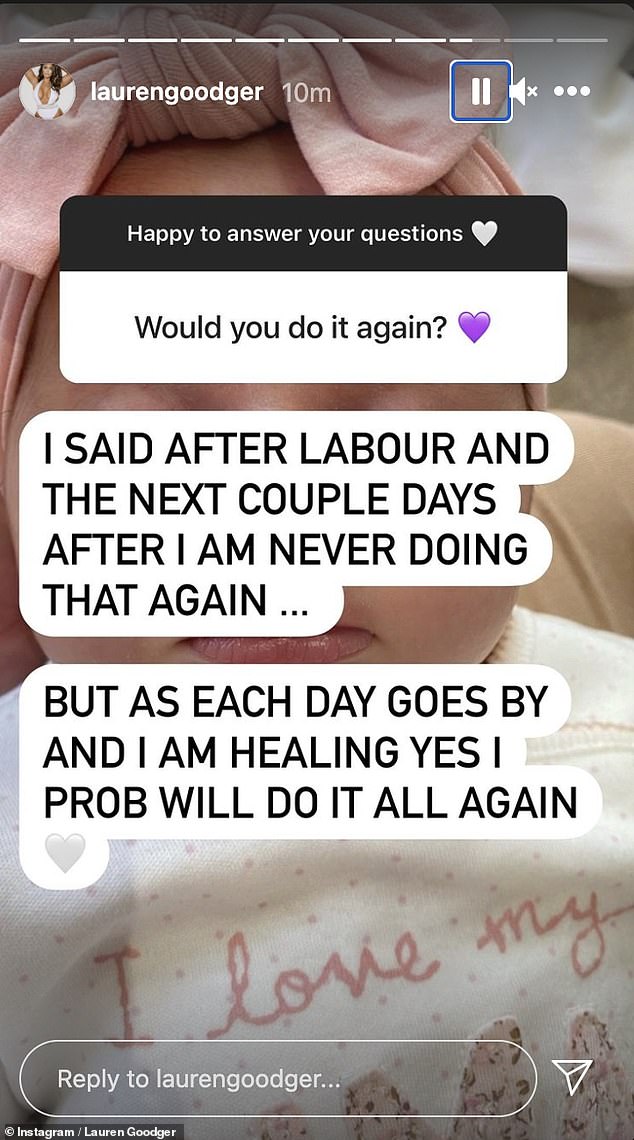 Future plans? The new mum also admitted she’s not completely against the idea of having another baby and going through the pain of labour again 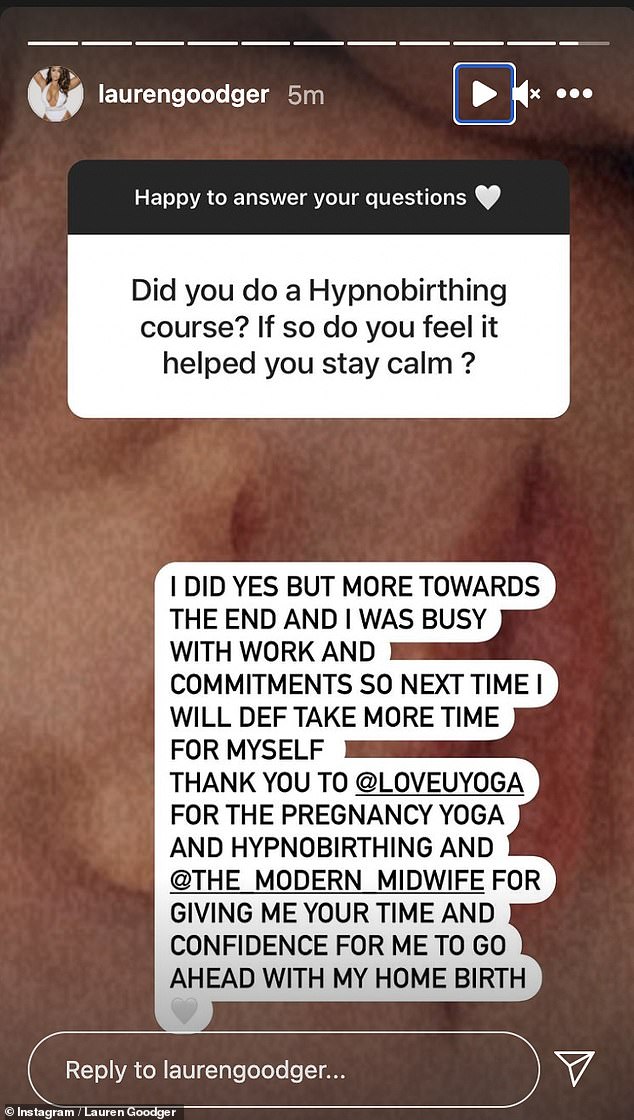 Changes: However she added that for another pregnancy she’d ‘take more time for myself’ as she was busy towards the end of her first

Lauren added an emoji with a pained expression over her face as well as including a bra containing watermelons and a small baby’s face to further protect her modesty.

The star also shared the same snap of herself inside the inflatable pool but covered it with white writing as she discussed her labour and positive waterbirth experience.

She penned: ‘This was my home birth and I used @birthpoolinabox. It arrived such fast delivery with the whole kit needed – including the pump to blow the pool up!

‘My baby girl Larose was born in 7 hours in my living room – gas and air only. I had my amazing midwife with me and another midwife arrived towards the end.

‘No complications. Look into your birth plan and choose the best option for you.’ 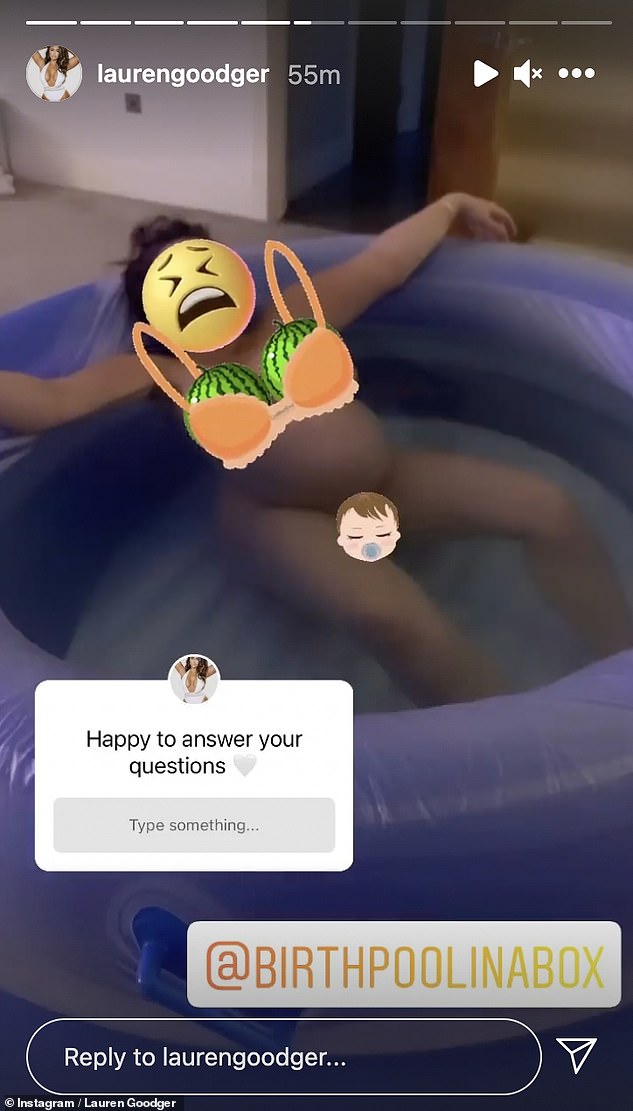 Special moments: The new mum, 34, posted a naked snap of herself during the home birth which was adorned with a selection of appropriately chosen emojis 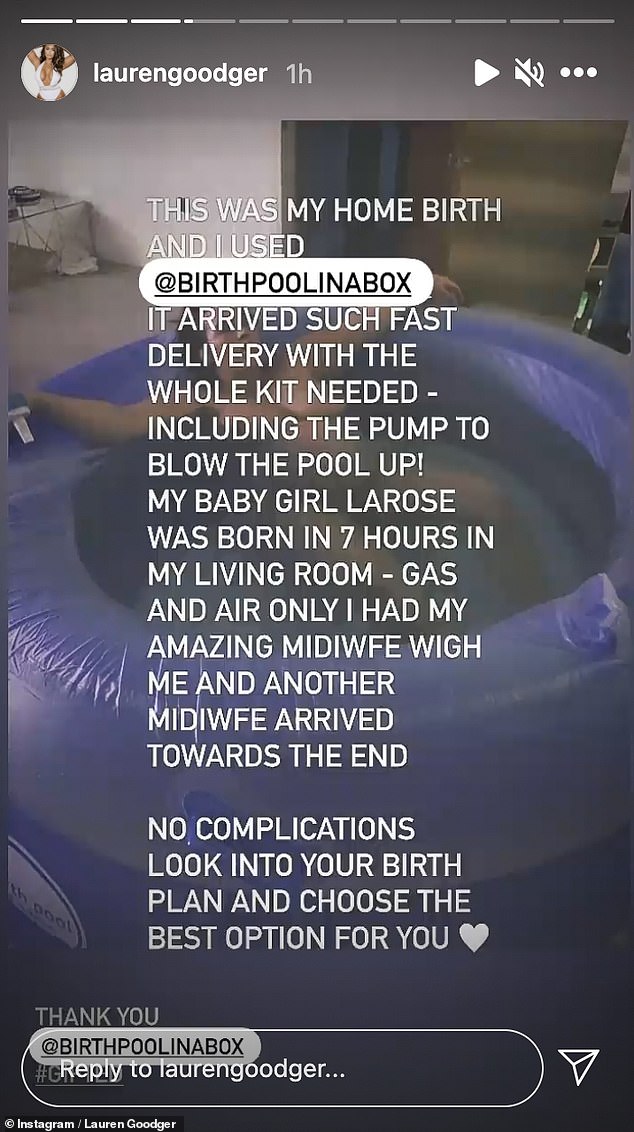 Q&A: Lauren also praised her ‘amazing’ midwife as she reflected on her seven hour labour and only using gas and air to help with the pain

It comes after Lauren revealed her placenta resembled a stingray as she continued to detail her drug-free home birth with daughter Larose.

Speaking to New! Magazine, Lauren said she now realised why her bump was ‘so big’ due to the size of her placenta.

She said: ‘My placenta was bigger than the baby so no wonder I had such a big bump! It came out like an animal, it looked like a stingray.

‘Then they checked me and I didn’t need any stitches and I didn’t tear. Now I’m just letting my body heal. I’m still bleeding and my bump is going down.’

The couple are happily enjoying life with their newborn and say they are excited about having Larose there on their wedding day.

Charles said: ‘Some people say you should be married before you have children but everyone goes at their own pace and I’m actually quite happy now that we’re going to be able to share that day with Larose and that’s going to be a magical moment.’

Lauren told fans her ‘life is complete’ in a gushing Instagram post last month, in which she also thanked her followers for their well-wishes. 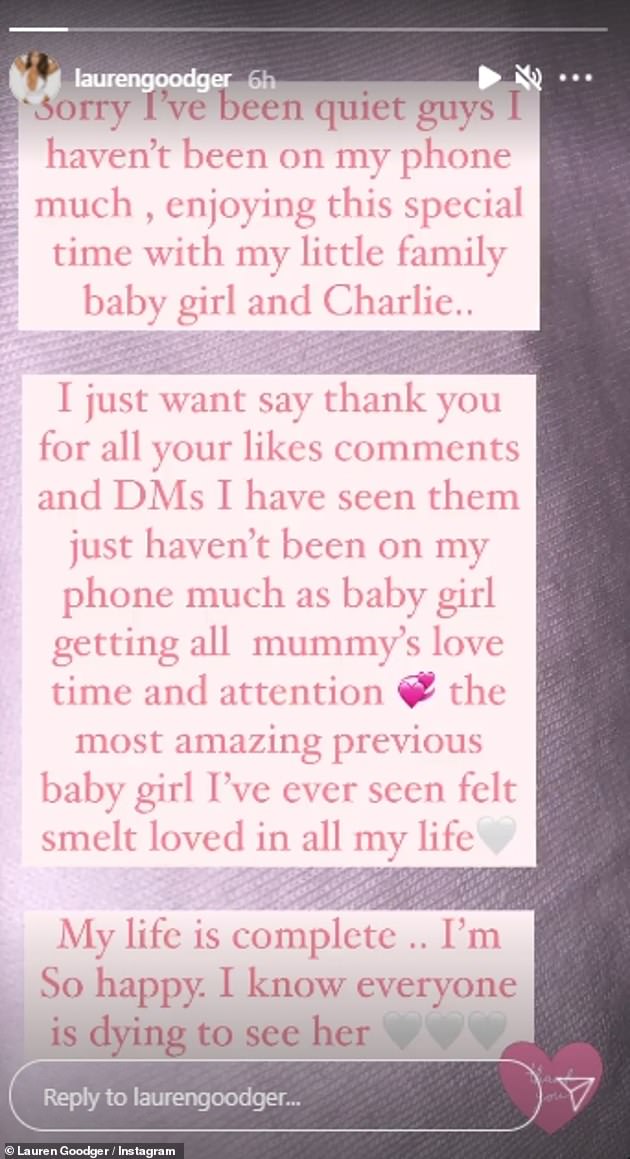 Happy: Lauren revealed her ‘life is complete’ as she gushed over her newborn daughter in an Instagram post last Thursday, in which she also thanked her fans for their well-wishes

The new mum wrote on her stories that she was ‘so happy’ and told how she and her partner are enjoying spending special time with their ‘precious baby girl’.

Lauren announced she was expecting her first child with Charles on January 19, three months after confirming their relationship.

At the beginning of the year Lauren confirmed she was three months pregnant in her new magazine column, and revealed that she would welcome the baby in July.

Lauren found fame on The Only Way Is Essex while in a relationship with ex-fiancé Mark Wright, with whom she was in a relationship for over 10 years, before going on to date jailbirds Jake McLean and Joey Morrison. 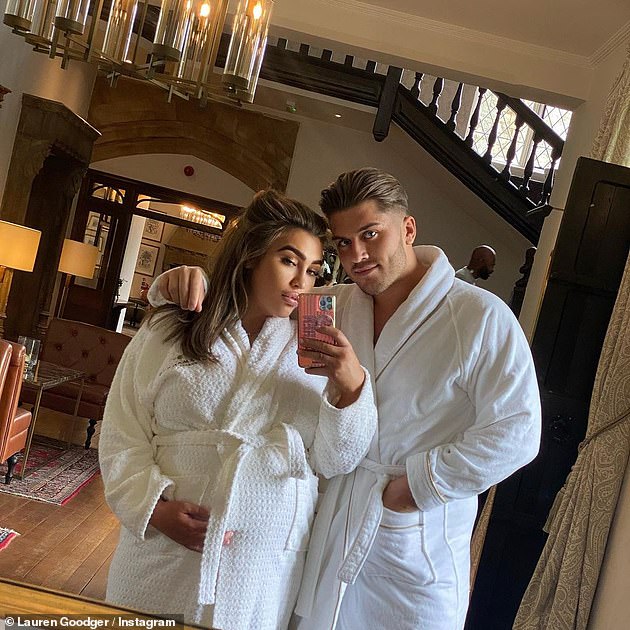 Baby joy: Lauren announced she was expecting her first child with Charles on January 19, three months after confirming their relationship