Logan Paul, 25, says he wants to take on Thor actor Chris Hemsworth, 37, in a boxing ring: ‘I’ll fight him after Mayweather’

Logan Paul wants to have a fight against Chris Hemsworth.

The YouTube star is set to face undefeated former world boxing champion Floyd Mayweather Jr in the ring next month for a special exhibition fight and has now set his sights on a bout with the Thor star in the future.

Responding to a video uploaded by 37-year-old Chris showing himself working on the pads, the 25-year-old replied: ‘I’ll fight him after Mayweather.’ 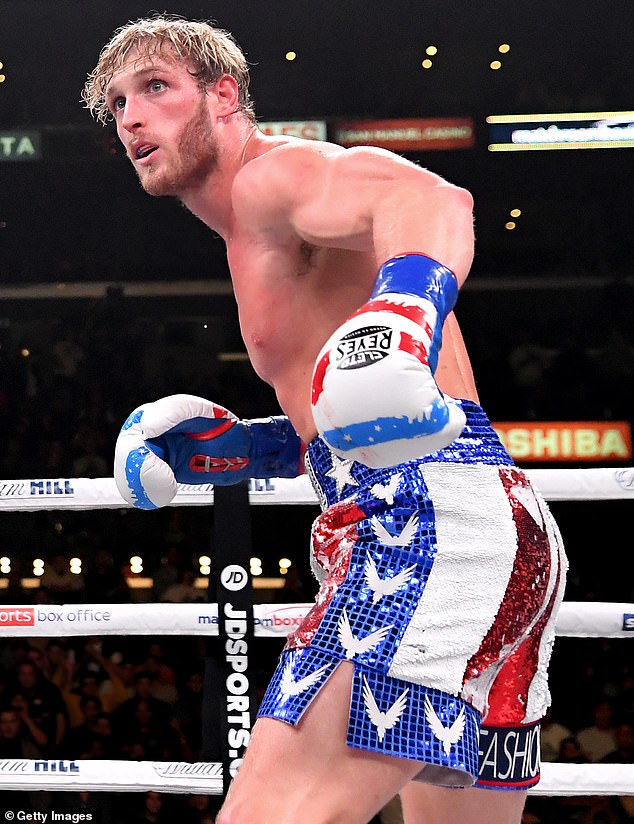 Looking to the future: Logan Paul has expressed his desire to face Chris Hemsworth in the boxing ring after his bout with Floyd Mayweather; he is seen during his pro debut in 2019

Hemsworth is a big UFC fan and has used martial arts in his training regimes, but has never had a professional fight unlike Logan – who lost by a split-decision against fellow YouTube star KSI in 2019.

Logan’s younger brother Jake is not convinced about his brother’s chances of beating 43-year-old Mayweather, and believes that the match-up will damage boxing’s reputation. 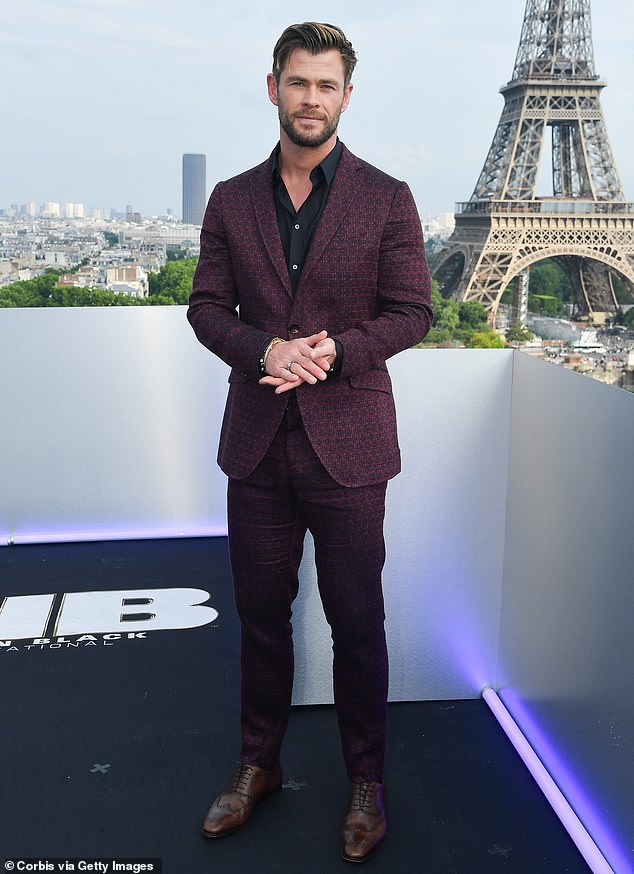 Potential opponent: Paul made his comments in response to a video of Hemsworth training in a boxing gym; the actor is pictured in 2019 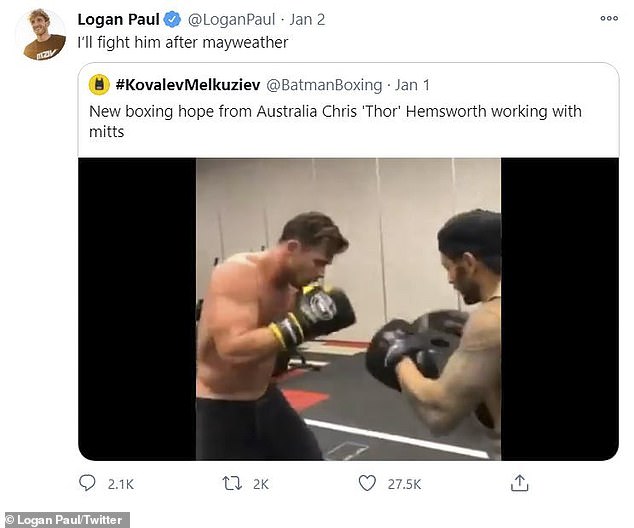 Making it public: The boxer made his interest in the fight widely known through his Twitter account

Jake did note that he still wanted the fight to go well, stating that: ‘I wish him the best of luck.’

The YouTuber also shared: ‘I just like – don’t get in there with a guy who’s never even been knocked out. He’s been knocked down once and it was by accident.’

He has enjoyed a more successful start to his boxing career after tasting victory in his first two fights, and he reportedly hopes to take on Mayweather after his sibling’s bout.

The Bizaardvark star later responded to Logan’s challenge to Hemsworth by writing on Twitter: ‘And then I’ll fight Mayweather.’

The news comes after Justin Bieber joked that he still hopes to challenge Tom Cruise to a fight and suggested that he would be able to take on the Mission: Impossible actor.

Building hype: After expressing doubt about his brother’s future match with Mayweather, Jake Paul stated that he would also interested in taking on the former champion in the future 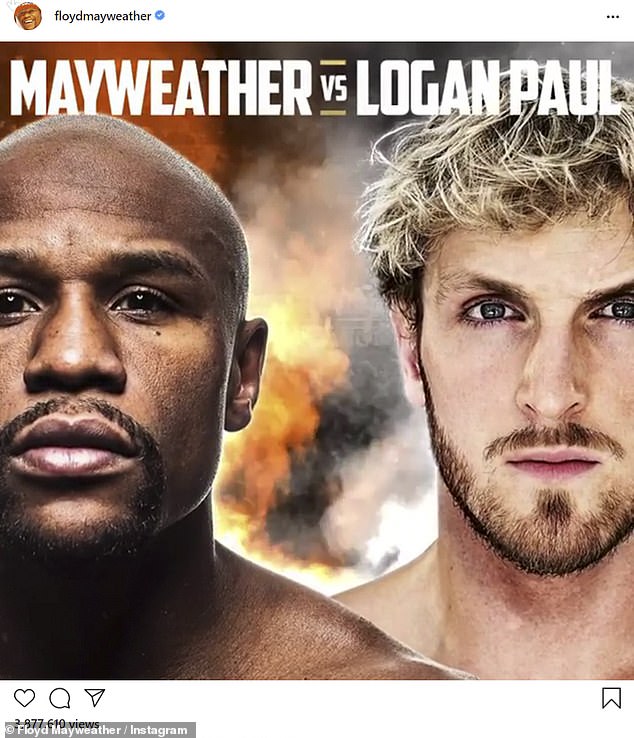 Coming soon: The YouTube star’s fight with the former world boxing champion is set to be broadcast on Feburary 20

The tweet partially read: ‘I wanna challenge Tom Cruise to fight in the octagon. Tom if you dont take this fight your scared and you will never live it down.’

Bieber also tagged UFC president Dana White in the post; he later admitted that the idea of a match between the two would not be likely.

Following the release of his music video for Anyone, the Sorry hitmaker posted a black and white snap on Instagram depicting him in the ring wearing boxing shorts with his name emblazoned across the waistband.

The singer referenced his previous remarks and reignited the feud as he quipped in the caption: ‘Tom Cruise is toast.’

Talking trash: In 2019, the hitmaker challenged Tom Cruise to an MMA match over Twitter and tagged UFC president Dana White in his tweet 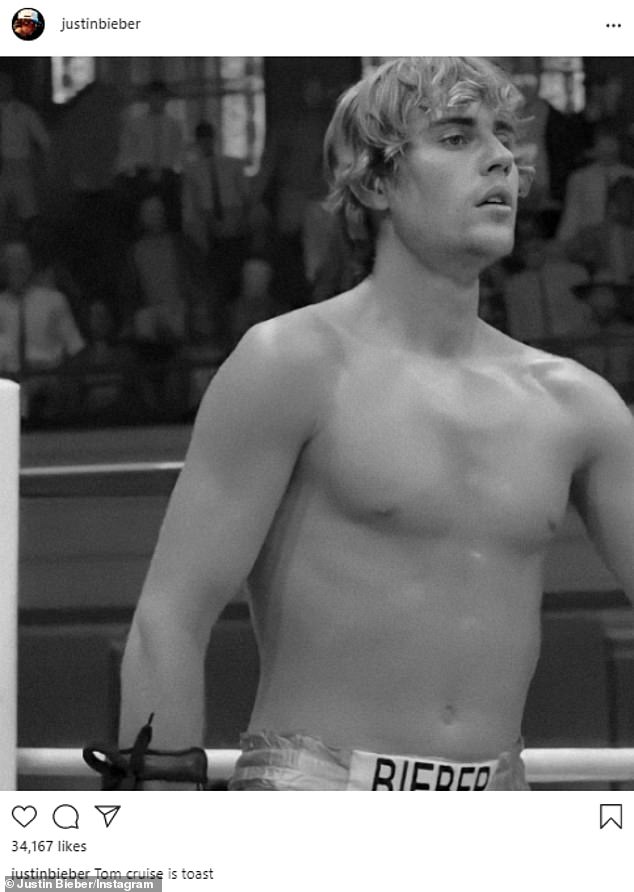 High expectations: Bieber jokingly stated that he could take on the Mission: Impossible actor in a fight, adding that his potential opponent would be ‘toast’