Home » Celebrities » Louise Thompson reveals she had a 'devastating' miscarriage

‘We lost our baby’: Louise Thompson reveals she suffered a ‘devastating’ miscarriage earlier this year – and says ‘I had no idea it was possible to love someone I’d never met so much’

Louise Thompson has revealed she suffered a ‘devastating’ miscarriage earlier this year in a  heartbreaking Instagram post.

The former Made in Chelsea star, 30, posted a picture to her social media on Tuesday night showing a tiny baby bump along with another snap of her positive pregnancy test.

Louise explained that she and her fiancé Ryan Libbey, 30, had lost their baby shortly after finding out that they were expecting their first child.

The TV personality explained how she ‘had no idea it was possible to love someone that I’d never met quite so much’ and said fertility can be a ‘rough and overwhelming ride’.

Louise said her ‘whole world changed’ the moment she saw the positive pregnancy test and she started to build an ’emotional connection’ to her baby – but she now recognises it ‘wasn’t meant to be’. 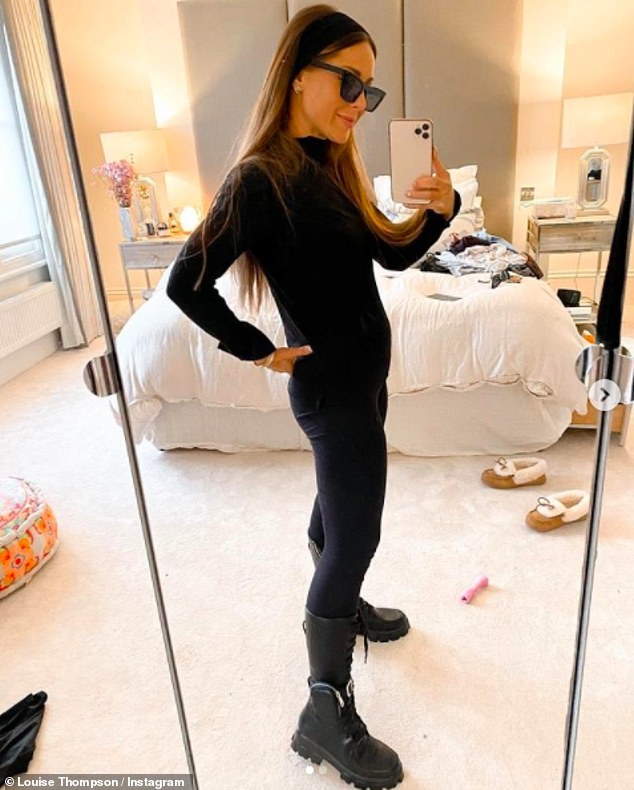 Devastating news: Louise Thompson has revealed she suffered a ‘devastating’ miscarriage earlier this year in a heartbreaking Instagram post 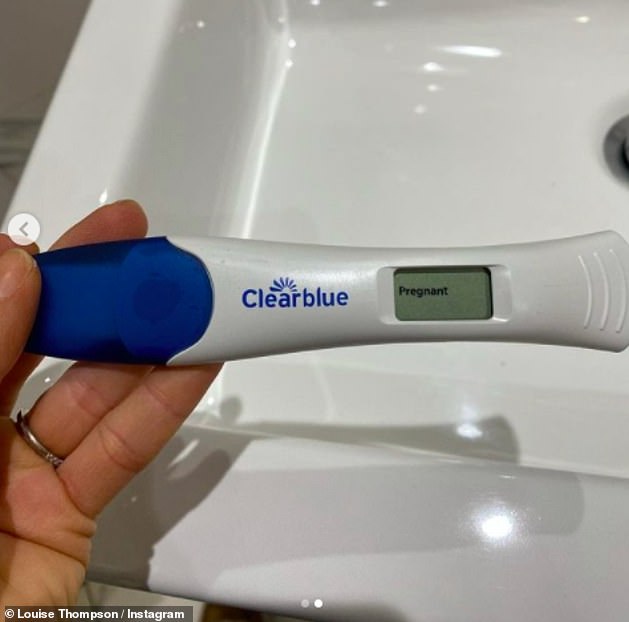 Heartbreaking: The former Made in Chelsea star, 30, posted a picture to social media on Tuesday showing a tiny baby bump along with another snap of her positive pregnancy test

She wrote: ‘I wanted to share my story because it might help someone, but for the first time in my life, I’m actually a bit lost for words.

‘Maybe it’s because I feel like I have SO much to say and I don’t want to waste this opportunity or because I’m not sure I’ve 100% processed it yet, but either way, there will be no ‘perfect’ time, so here goes, I’ll try my best.

‘I’ve always been taught that a problem shared is a problem halved, and I pass that mantra on to others, always encouraging people to talk, talk, talk, so it’s time to practice what I preach.’

She continued: ‘It might seem like everywhere you look on Instagram people are loved up, happy as can be, getting engaged, buying their first house, having intimate weddings, getting their dream job, announcing pregnancies, and other momentous occasions! 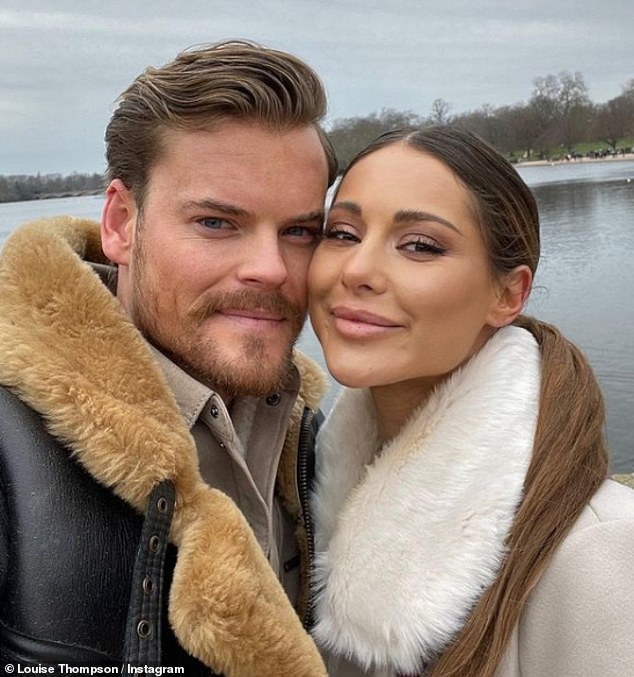 Happy couple: Louise is engaged to personal trainer and former Made In Chelsea co-star Ryan Libbey, 30, who she has been in a relationship with since 2016 (pictured) 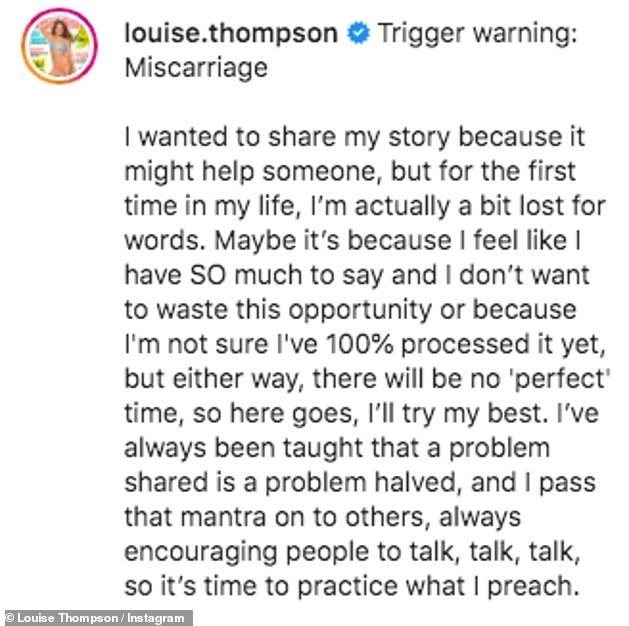 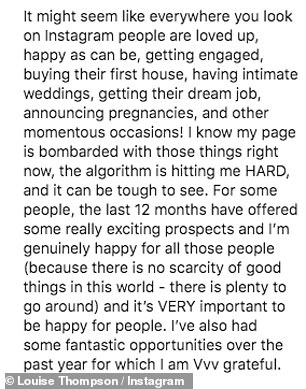 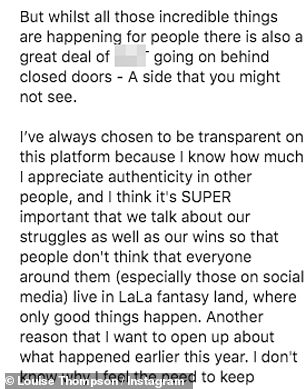 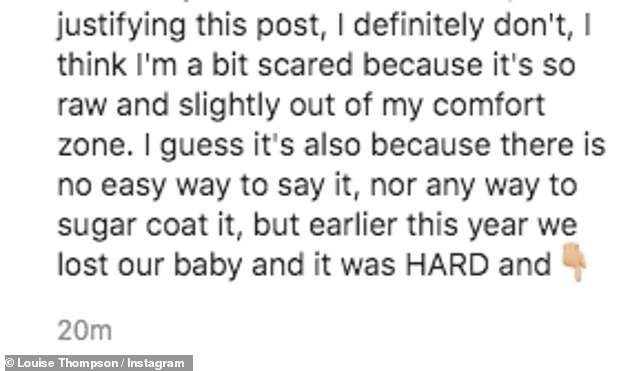 Hard: She said that she ‘had no idea it was possible to love someone that I’d never met quite so much’ as she detailed how fertility can be a ‘rough and overwhelming ride’

‘I know my page is bombarded with those things right now, the algorithm is hitting me HARD, and it can be tough to see.

‘For some people, the last 12 months have offered some really exciting prospects and I’m genuinely happy for all those people (because there is no scarcity of good things in this world – there is plenty to go around) and it’s VERY important to be happy for people.

‘I’ve also had some fantastic opportunities over the past year for which I am Vvv grateful.

‘But whilst all those incredible things are happening for people there is also a great deal of S**T going on behind closed doors – A side that you might not see.

‘I’ve always chosen to be transparent on this platform because I know how much I appreciate authenticity in other people. 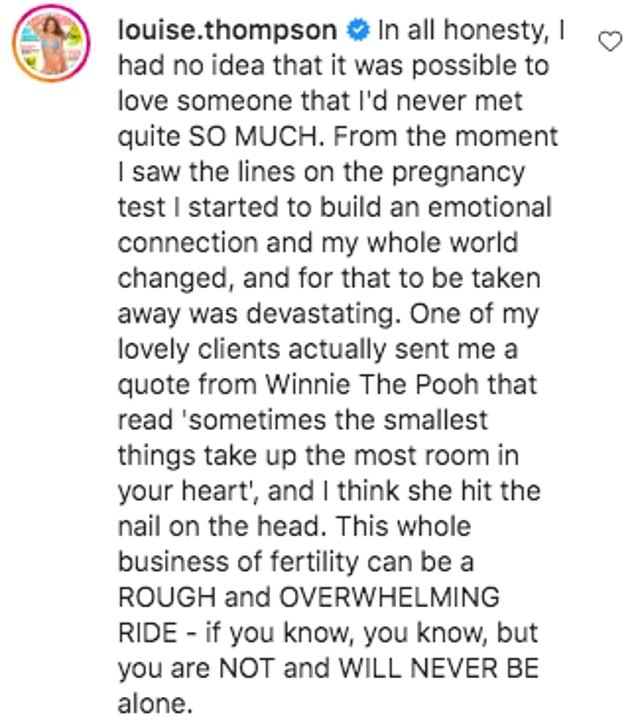 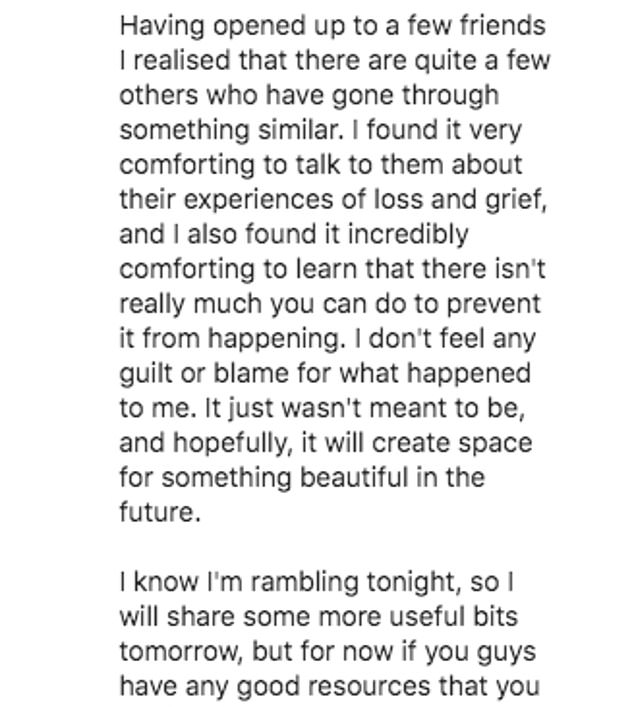 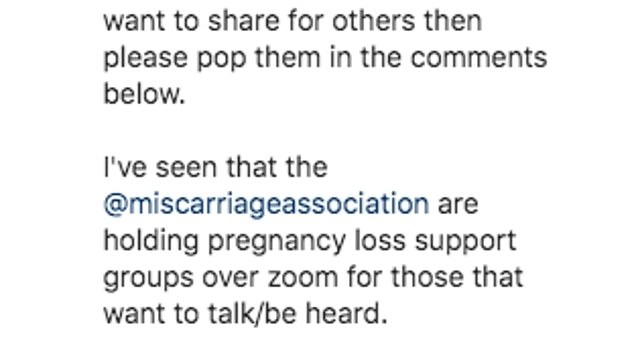 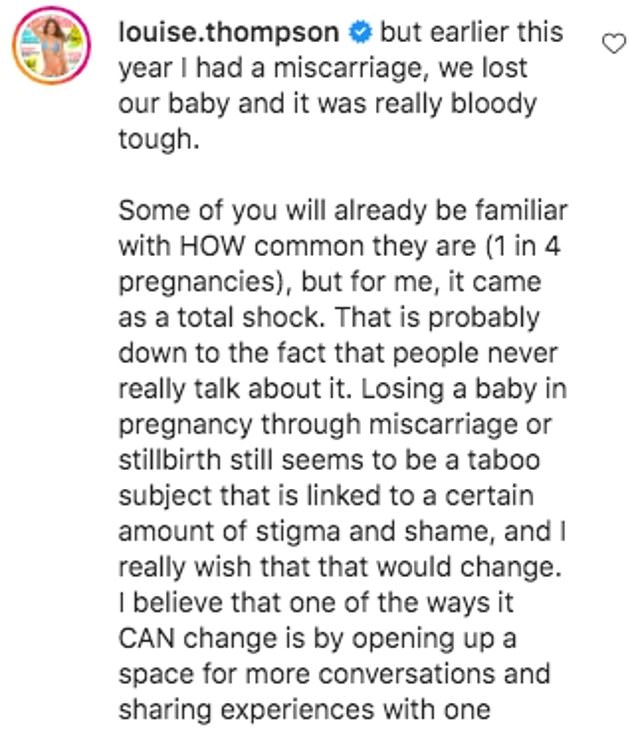 Opening up: She explained her experience in the lengthy post and shared resources for others going through the same thing

‘And I think it’s SUPER important that we talk about our struggles as well as our wins so that people don’t think that everyone around them (especially those on social media) live in LaLa fantasy land, where only good things happen.’

Louise continued: ‘Another reason that I want to open up about what happened earlier this year.

‘I don’t know why I feel the need to keep justifying this post, I definitely don’t, I think I’m a bit scared because it’s so raw and slightly out of my comfort zone.

‘I guess it’s also because there is no easy way to say it, nor any way to sugar coat it, but earlier this year we lost our baby and it was HARD.’

Louise said her ‘whole world changed’ the moment she saw the positive pregnancy test and she started to build an ’emotional connection’ to her baby.

She wrote: ‘In all honesty, I had no idea that it was possible to love someone that I’d never met quite SO MUCH. 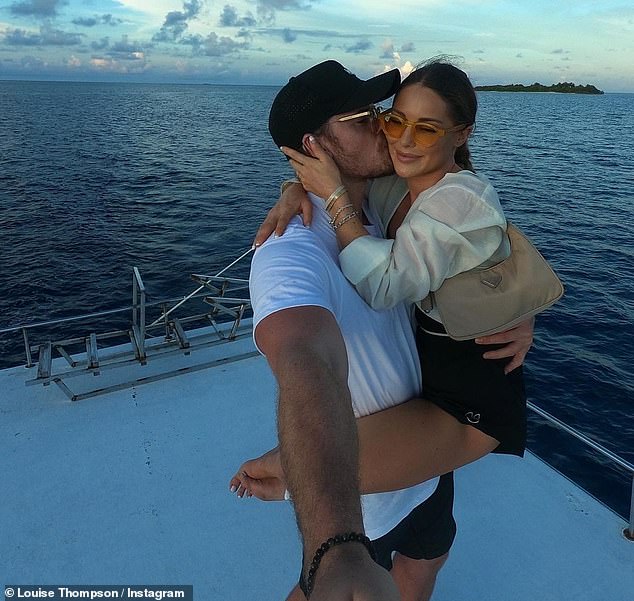 Loved-up: Louise has been dating Ryan since 2016, with the pair announcing their engagement in August 2018

‘From the moment I saw the lines on the pregnancy test I started to build an emotional connection and my whole world changed, and for that to be taken away was devastating.

‘One of my lovely clients actually sent me a quote from Winnie The Pooh that read ‘sometimes the smallest things take up the most room in your heart’, and I think she hit the nail on the head.

‘This whole business of fertility can be a ROUGH and OVERWHELMING RIDE – if you know, you know, but you are NOT and WILL NEVER BE alone.⁣’

She continued: ‘Having opened up to a few friends I realised that there are quite a few others who have gone through something similar.

‘I found it very comforting to talk to them about their experiences of loss and grief, and I also found it incredibly comforting to learn that there isn’t really much you can do to prevent it from happening.

‘I don’t feel any guilt or blame for what happened to me. It just wasn’t meant to be, and hopefully, it will create space for something beautiful in the future.⁣’ 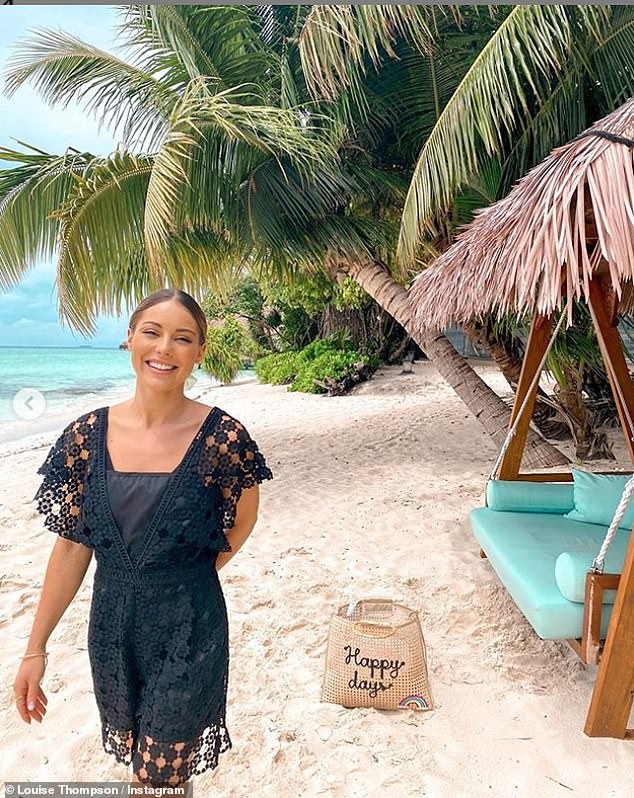 Moving on: Louise and Ryan appeared on the reality series Made in Chelsea together before leaving the show to pursue other opportunities

She added: ‘I know I’m rambling tonight, so I will share some more useful bits tomorrow, but for now if you guys have any good resources that you want to share for others then please pop them in the comments below.⁣

‘I’ve seen that the @miscarriageassociation are holding pregnancy loss support groups over zoom for those that want to talk/be heard.⁣ And ⁣@Tommys is a great charity funding research into the prevention of baby loss.’

Louise has been dating personal trainer Ryan since 2016, with the pair announcing their engagement in August 2018.

The couple appeared on the reality series Made in Chelsea together before leaving the show to pursue other opportunities.

What causes a miscarriage?

It is highly unlikely that you will ever know the actual cause of a one-off miscarriage, but most are due to the following problems:

The most common cause of miscarriages in the first couple of months is a one-off abnormal development in the fetus, often due to chromosome anomalies. ‘It’s not as though the baby is fine one minute and suddenly dies the next,’ says Professor James Walker, Professor of Obstetrics and Gynaecology at the University of Leeds.

‘These pregnancies fail from the outset and were never destined to succeed.’ Most miscarriages like this happen by eight weeks, although bleeding may not start until three or four weeks later, which is worth remembering in subsequent pregnancies. ‘If a scan at eight weeks shows a healthy heart beat, you have a 95 per cent chance of a successful pregnancy,’ says Professor Walker.

A hormonal blip could cause a sporadic miscarriage and never be a problem again. However, a small number of women who have long cycles and irregular periods may suffer recurrent miscarriages because the lining of the uterus is too thin, making implantation difficult.

‘There used to be a trend for progesterone treatment, but trials show this really doesn’t work,’ warns Professor Walker. ‘There is some evidence that injections of HCG (human chorionic gonadotrophin, a hormone released in early pregnancy) can help, but it’s not the answer for everyone.’ The treatment must be started as soon as the pregnancy is confirmed, at around four or five weeks.

Around 20 per cent of recurrent miscarriers suffer from lupus or a similar auto-immune disorder that causes blood clots to form in the developing placenta.

A simple blood test, which may need to be repeated several times, can reveal whether or not this is the problem.’One negative test does not mean that a women is okay,’ warns Mr Roy Farquharson, consultant gynaecologist who runs an early pregnancy unit at the Liverpool Women’s Hospital.

Often pregnancy can be a trigger for these disorders, so a test should be done as soon as possible,’ he adds.But it can easily be treated with low dose aspirin or heparin injections, which help to thin the blood and prevent blood clots forming – a recent trial also showed that women do equally well on either. ”We have a 70 per cent live birth rate in women treated for these disorders,’ says Dr Farquharson, ‘which is excellent.’

While uterine abnormalities, such as fibroids, can cause a miscarriage, many women have no problems carrying a pregnancy to term. An incompetent cervix can also cause miscarriage at around 20 weeks.

While this can be treated by a special stitch in the cervix, trials suggest it is not particularly successful, although it may delay labour by a few weeks.Gene and chromosomal abnormalities, which can be detected by blood tests, may also cause recurrent miscarriages in a small number of couples.

A procedure known as preimplantation genetic diagnosis can help. After in-vitro fertilisation (IVF), a single cell is taken from the developing embryo and tested for the gene defect. Only healthy embryos are then replaced in the womb.

It is an expensive and stressful procedure – and pregnancy rates tend to be quite low – but for some this is preferable to repeated miscarriages or a genetically abnormal baby.