Louise Thompson has shared a candid insight into her post-traumatic stress disorder (PTSD) battle, following the traumatic birth of her son, tearing up as she recalled times when she felt she was ‘not alive’.

The former Made In Chelsea star went through multiple traumatic incidents after giving birth to her son Leo-Hunter eight months ago, and has been struggling with ongoing mental health problems.

Speaking after being admitted to hospital again, Louise, 32, said her brain had ‘basically shut down’ and she had experienced panic attacks ‘back to back’ during her toughest moments.

In a video posted to Instagram, she spoke candidly about her experiences over the past few months but reassured viewers also struggling that they were ‘not alone,’ and that she wanted to ‘give them hope’.

She later shared that following a panic attack on Tuesday morning she endured an hour of ‘partial blindness’.

Louise said in another Instagram Story: ‘I’ve learnt to become very good at masking emotions to protect those around me.’

It comes less than a week after Louise was admitted to hospital for the second time in a month to be treated for mental health issues, saying she would be taking a break from social media.

She told viewers on Monday night that despite appearing ‘well presented, put together and happy’ in her video, it had taken her six attempts to record and things had been ‘really bad’ for her recently. 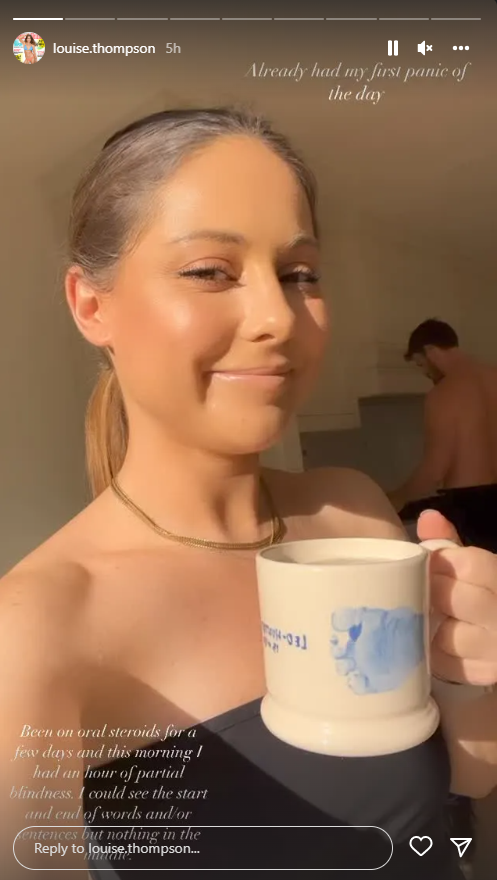 She said: ‘Mental health is the most cruel, invisible disease out there but I want you to know you are not alone.

‘You can never predict (it), you never think these things will happen to you I had everything and it’s all been completely ripped away from me.’

The reality TV star fought tears during the emotional video, as she added there had been times she could not think about anything ‘except death’.

She said: ‘I was scared of everything in my house…I couldn’t see, couldn’t smell, couldn’t talk… when I would talk I would panic because every word that came out of my mouth didn’t make sense.

‘I was not alive, I couldn’t have a normal thought. My brain basically shut down.

‘When something really traumatic happens your brain can’t process it properly…and it means you live in fear.’

Louise also said that she had been messaged by men whose partners were also struggling and that she wanted to provide ‘pure reassurance’ that things would get better and urged anyone who felt the same way to ‘get help’.

The reality star and fitness entrepreneur was diagnosed with PTSD after suffering complications while giving birth to her son Leo-Hunter, with her partner Ryan Libbey, late last year.

On Christmas Day, she shared a heartfelt post in which she paid tribute to the NHS staff who ‘worked through the night to save my life’.