Mark Ruffalo sees a better future. The actor encouraged viewers to keep fighting for “inclusion and justice” while accepting his award for Best Actor in a Limited Series or Motion Picture Made for Television at the 2021 Golden Globes on Sunday.

After thanking Wally Lamb, the author of the 1998 novel his HBO miniseries I Know This Much Is True is based on, Ruffalo directed his speech to those watching.

“At 54 years, it is my humble belief that what will give all this sadness and loss — what we’ve all lived through — meaning is our common humanity,” he said. “What connects us is greater than what keeps us apart, and the more we include each other and see each other and hear each other, the faster we will heal our broken hearts and minds.”

“We have a dying mother, just like the mother in our story, she’s Mother Earth, and we must … honor her, and she’ll be courageous too,” he added.

Ruffalo, whose wife, Sunrise Coigney, emotionally helped turn the pages of his passionate speech, encouraged viewers to “be courageous together.”

“Let’s turn the page on the cruel past of this nation,” he pleaded. “The good news is inclusion and justice and care for Mother Earth is breaking out everywhere. The godly light of decency is breaking through the hideous dark storm we’ve been living through. We are all in this together. We are the ones we’ve been waiting for, so let’s do this.” 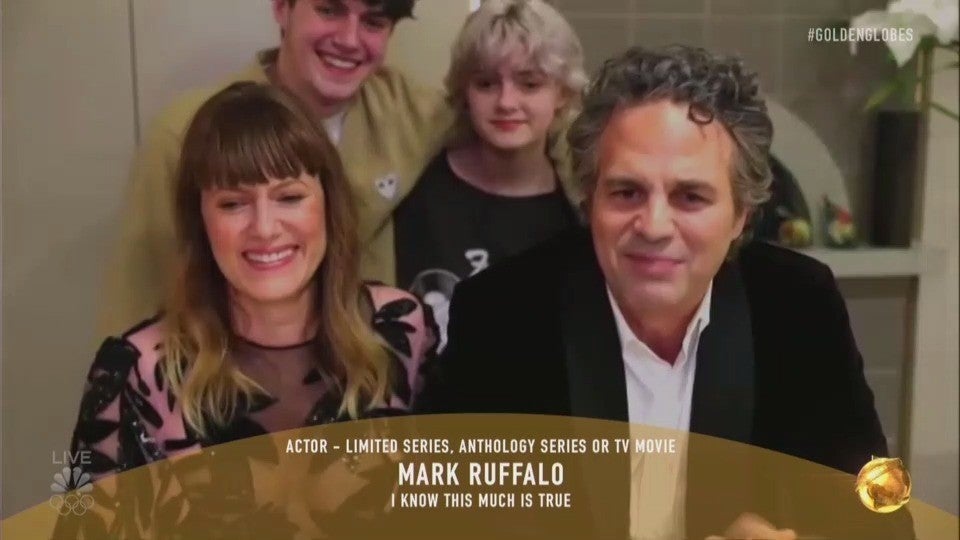 Ruffalo was up against Bryan Cranston, Jeff Daniels, Hugh Grant and Ethan Hawke at Sunday’s awards show — but ended up taking home the trophy for his role in I Know This Much Is True. This was Ruffalo’s first win, and fifth nomination — and his children sweetly made an appearance to celebrate.

Follow along at ETonline.com for all the 2021 Golden Globes live updates. And here’s our Golden Globes winners list, updated live as all the awards are announced.