Mary J. Blige has been hard at work in the recording studio putting the finishes touches on her 14th studio album.

And then, on Friday, the so-called Queen Of Hip Hop Soul went public and announced the album, Good Morning Gorgeous, will drop on February 11, 2022.

With most of the hard work on the new batch of songs now behind her, the Everything singer decided to to enjoy a little rest and relaxation with a day on the beach in Miami, Florida on Sunday. 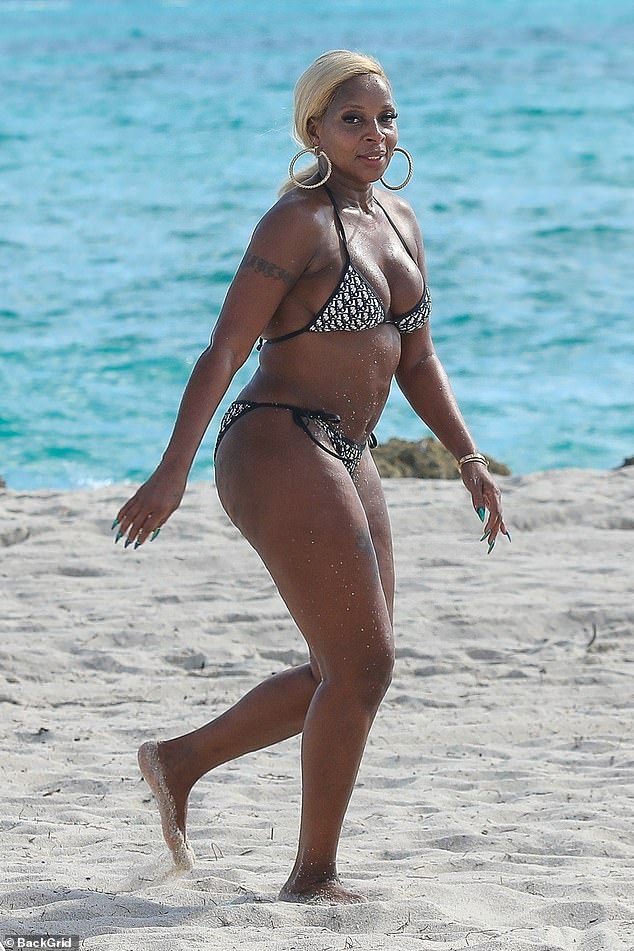 R&R for the Queen: Mary J. Blige, 50, hit the beach in a tiny Dior bikini for a day on the beach in Miami, Florida on Sunday

Blige (born Mary Jane Blige), 50, soaked in all the fun in the sun in a in a black and white-patterned bikini from Dior.

The top’s tight fit made for a risque endeavor whenever she decided to take a dive into the crashing waves of the Atlantic Ocean.

Whether she was working out her curves while swimming, or kicking back and lounging on the sand, the New York City native pulled her long blonde tresses back into a ponytail. 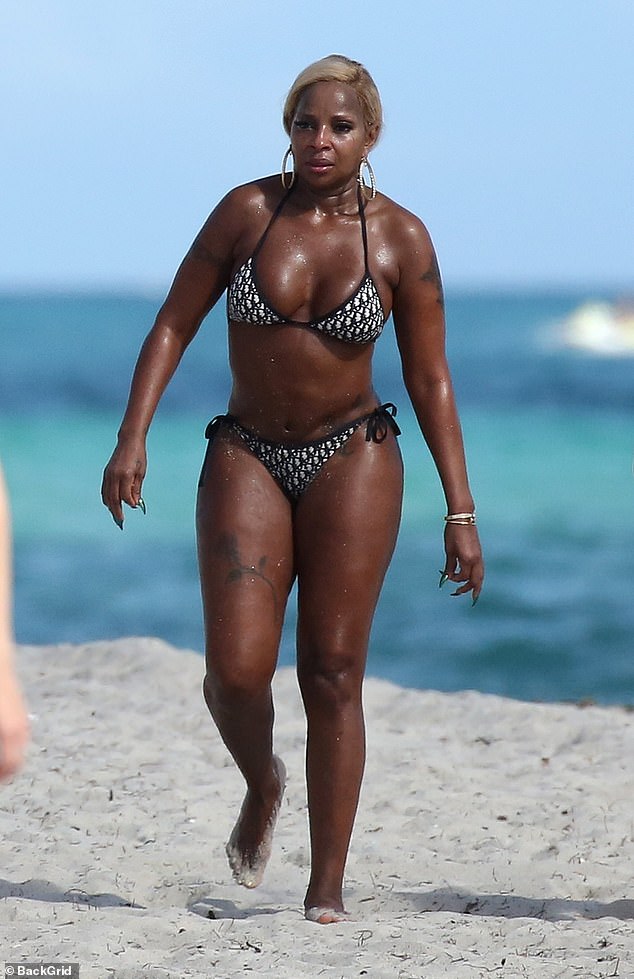 Chillin’: The Queen Of Hip Hop Soul spend time in the water and lounging on the sand

At times, the R&B queen shaded her face with a bucket hat, as the sun glared down on a day where the temperatures hovered around 80 degrees Fahrenheit.

She had been in the Sunshine State to attend the annual Art Basel, an annual week-long fair that celebrates art and fashion.

With her last offering of songs coming some four years ago, in the form of the studio album, Strength Of A Woman (2017), Blige made her return to the music scene with two new singles: the title track Good Morning Gorgeous and Amazing. 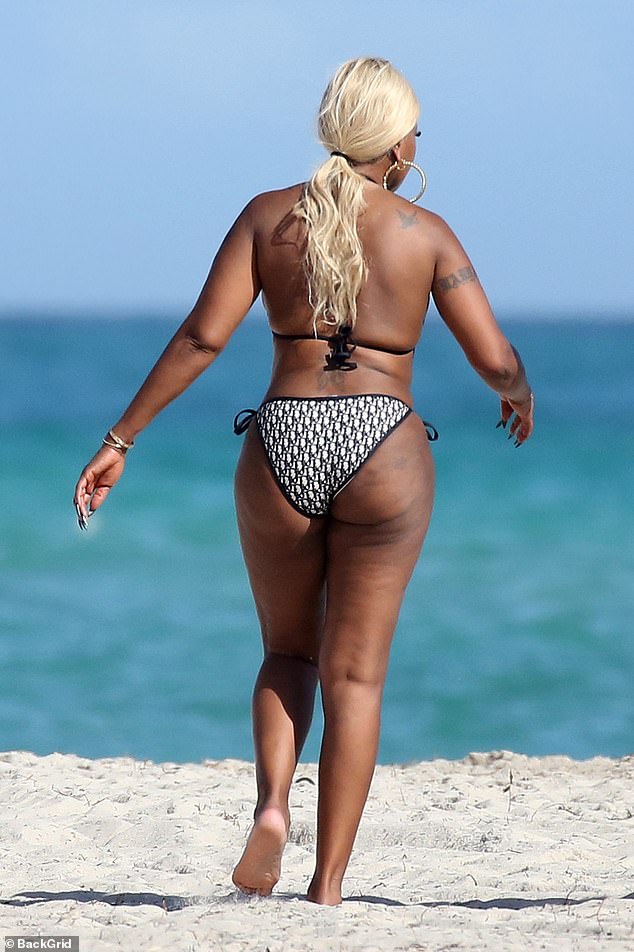 Baby got back: Blige had been in the Sunshine State to attend At Basel 2021, an annual week-long fair that celebrates art and fashion

The new record will sure to get a bump in visibility with her upcoming performance during the Super Bowl LVI Halftime Show. In fact, the album will drop two days before she hits the grand stage of the NFL’s championship game.

Working on this new album has been so much fun,’ Blige stated in a press release, as reported by Pitchfork.

‘I’m excited for my fans to hear these first two songs to give them a taste of what’s to come. I’m grateful to all my collaborators and partners who have walked with me through this process and even more grateful to my fans who I hope have a blast with this new music.’

Kickstarting her career in 1991, Blige has seen eight of her 13 albums achieved multi-platinum worldwide sales, translating into nine Grammy Awards. 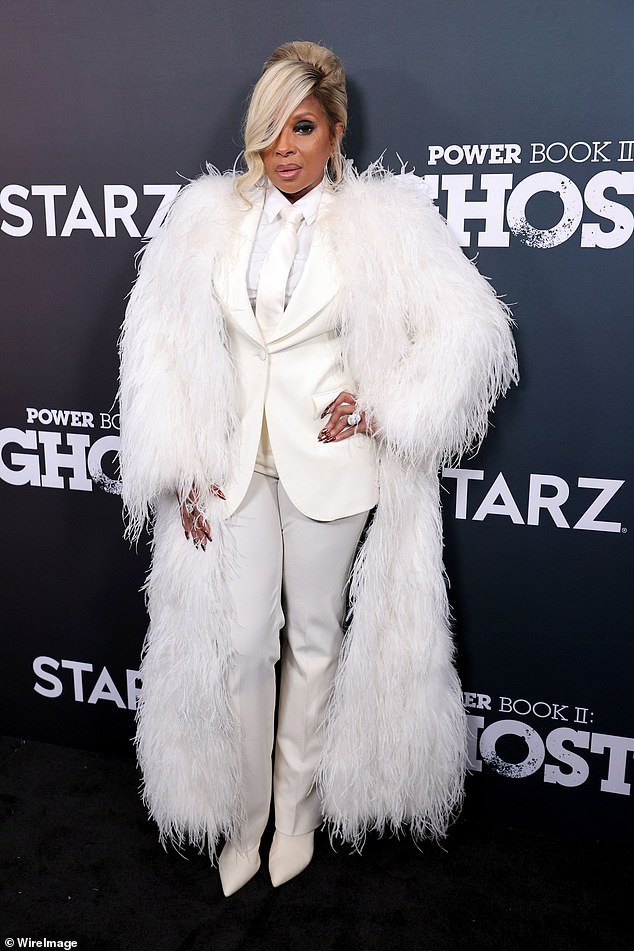 New tunes ahead: The nine-time Grammy Award winner announced she is releasing her 14th studio album, Good Morning Gorgeous, on February 11, 2022; the singer-songwriter is pictured at the premiere of season two of Power Book II: Ghost