Michelle Keegan was feeling nostalgic for a summer road trip on Sunday.

The actress, 33, posted a throwback snap to Instagram of herself perched behind the wheel of a truck, staring wistfully out the window.

She showed off her tanned legs in tiny frayed white shorts and wore a baggy bubblegum pink sweater. 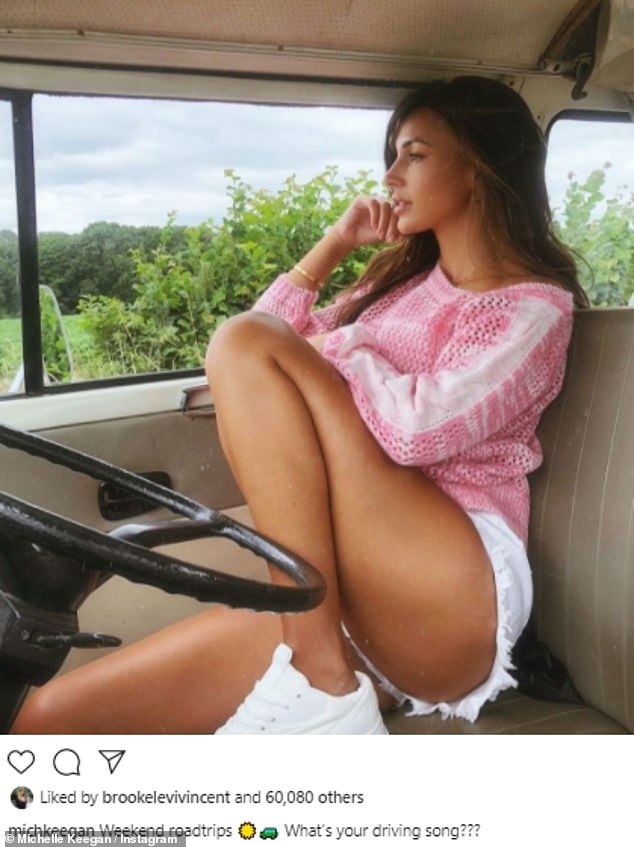 Hit the road: Michelle Keegan was feeling nostalgic for a summer road trip on Sunday

She completed things with bright white trainers as she hiked one knee up on the seat.

Looking tanned, she wore her chestnut locks tumbling around her shoulders.

‘Weekend roadtrips ☀️ What’s your driving song???’ she asked her followers in the captain.

Earlier in the week, she posted another sweet throwback photo with her granddad to mark St Patrick’s Day. 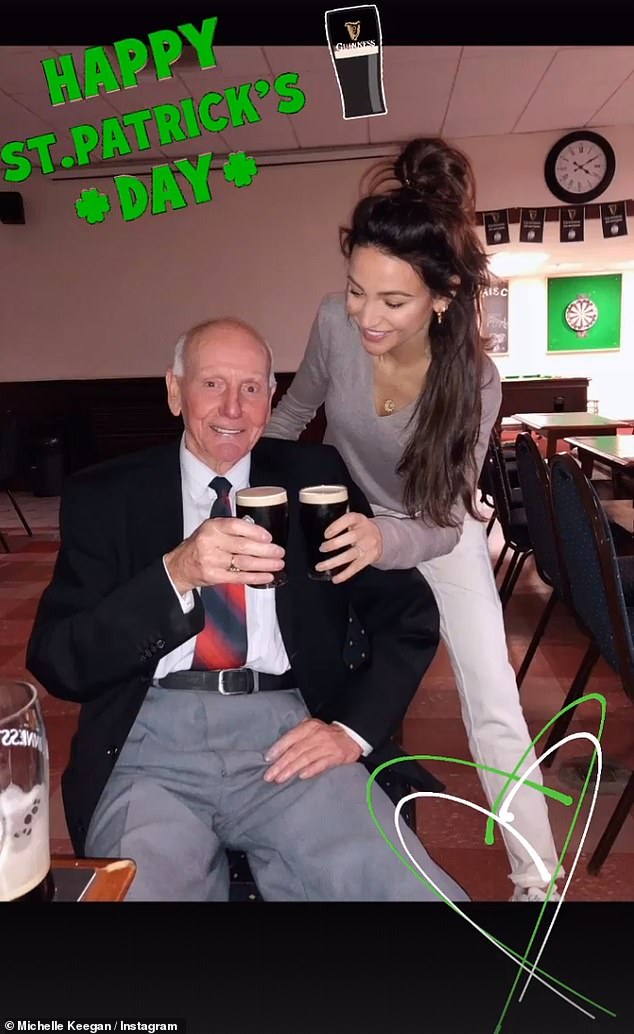 Sweet! Michelle took a moment away from her hectic work schedule on Wednesday to upload a sweet throwback photo with her granddad to mark St Patrick’s Day

linked her pint of Guinness against her granddad’s as she smiled fondly at him.

Michelle cut a casual figure in a v-neck jumper and cream jeans while sporting trainers.

She swept her cascading locks up in a half-up, half-down hairdo and rocked natural make-up.

Her granddad looked smart in grey trousers and a black blazer which he teamed with a shirt and striped tie. 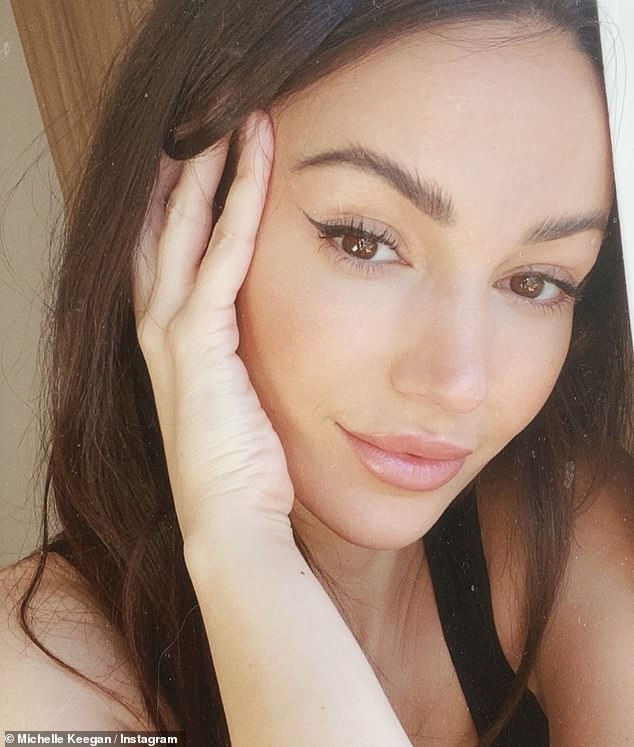 Looking back: The actress, 33, clinked her pint of Guinness against her granddad’s as she smiled fondly at him and penned: ‘Happy St Patrick’s Day’

On Saturday, Michelle looked effortlessly chic once again as she battled the elements in a snap posted to her Instagram Story.

The actress lit up her Brassic night shoot posing under an umbrella in an ankle length white puffer parka featuring a fur-look hood.

Michelle, who plays single mum Erin Croft in the comedy, sported a second zipped puffer underneath, which she paired with a leopard-print mini.

The former Coronation Street star completed the look with a pair of thigh-high black boots and gold hoops.

She wore her long chestnut locks down with a loose wave, and smiled as she posed for the snap with cast and crew.

The TV star captioned the pic: ‘Nightshoots with these beauts’.

Michelle put on a very animated display as she shared a giggle with her co-stars during Brassic filming in Bacup, Lancashire, on Tuesday.

Like many other shows, Brassic’s filming schedule was slightly derailed by the coronavirus pandemic.

Michelle was forced to stop filming the third series of the show last year, in order to isolate, after she was exposed to COVID-19. 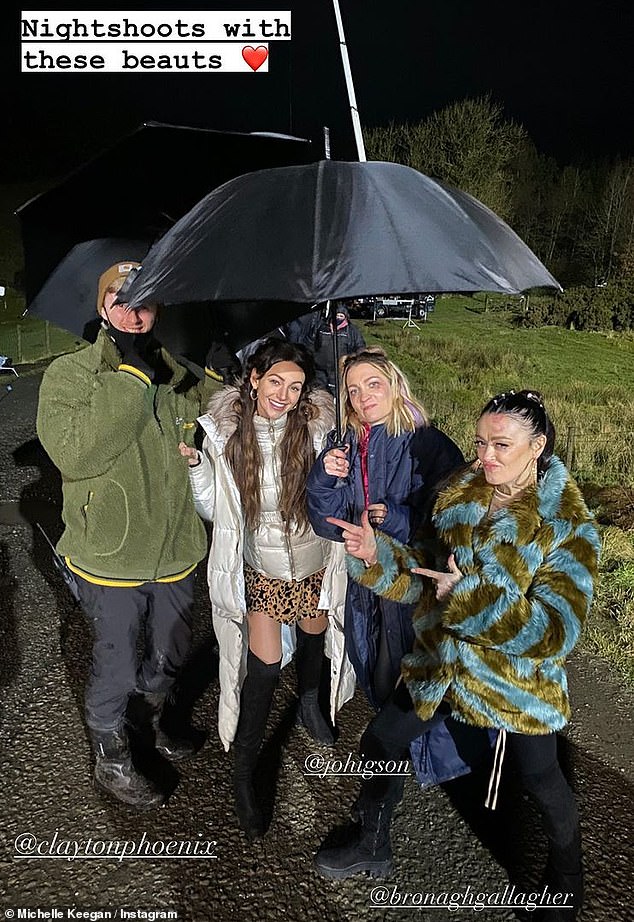 Strike a pose: On Saturday, Michelle looked effortlessly chic once again as she battled the elements in a Brassic night shoot and posted a quick snap to her Instagram Story

A source told MailOnline at the time: ‘Michelle had to take time away from the Brassic set. She has once again been laying low in Essex with her husband Mark Wright.

‘She only missed one day of filming. But she needed to isolate after she came into contact with someone in Manchester who had it.

‘Luckily it all happened very quickly and Michelle did not return to the Brassic set before isolating. So it didn’t affect filming too much.

‘She has spent last two weeks in total isolation. She will go back to filming at the end of this week.’

Brassic follows the story of Lancashire native Vinnie (Joe Gilgun), who suffers from bipolar disorder and his best friend Dylan, played by Damien Molony, from whom he has been inseparable since childhood.

A tainted past, the boys have dealt, scammed, bribed and conned their way through adolescence.

Now, on the brink of adulthood, their dealing and stealing is catching up with them, with the repercussions of their crimes heading their way.

Michelle plays alongside them as a single mum seeking a better life for herself and son Tyler (Jude Riordan).

While navigating complicated relationships with the show’s leads Dylan and Vinnie, she still strives for a good childhood for her son.

The new series of Brassic is expected to air on Sky One later this year following two extremely popular previous seasons. 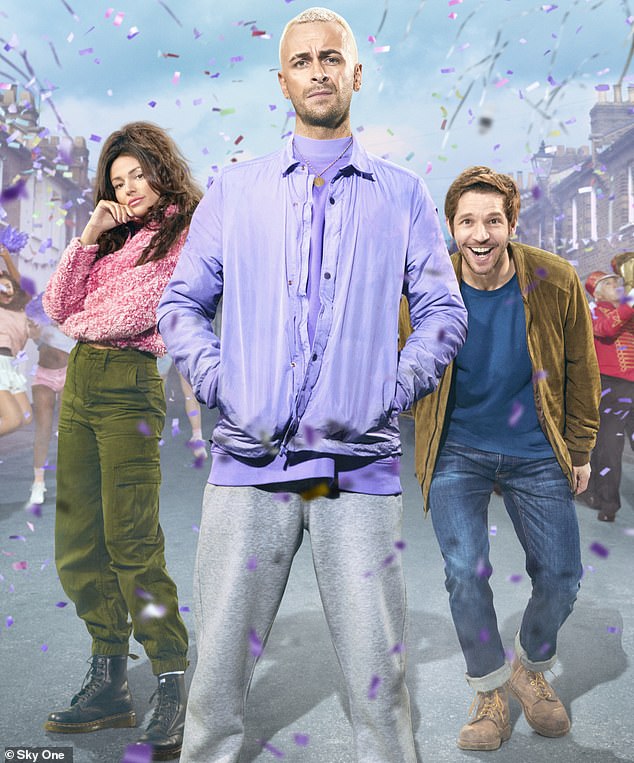 Back to business: The actress recently returned to filming where she plays single mum Erin Croft in the Sky One comedy