Miley Cyrus rose to the occasion with a recent look while stationed in Texas for Austin City Limits Festival.

The 28-year-old singer showed off her very voluminous mane of platinum hair while joking ‘Everything’s bigger in Texas including my HAIR!’

In a series of images posted to Instagram the Plastic Hearts crooner posed up a storm in a beaded fringed set ahead of her performance at Zilker Park. 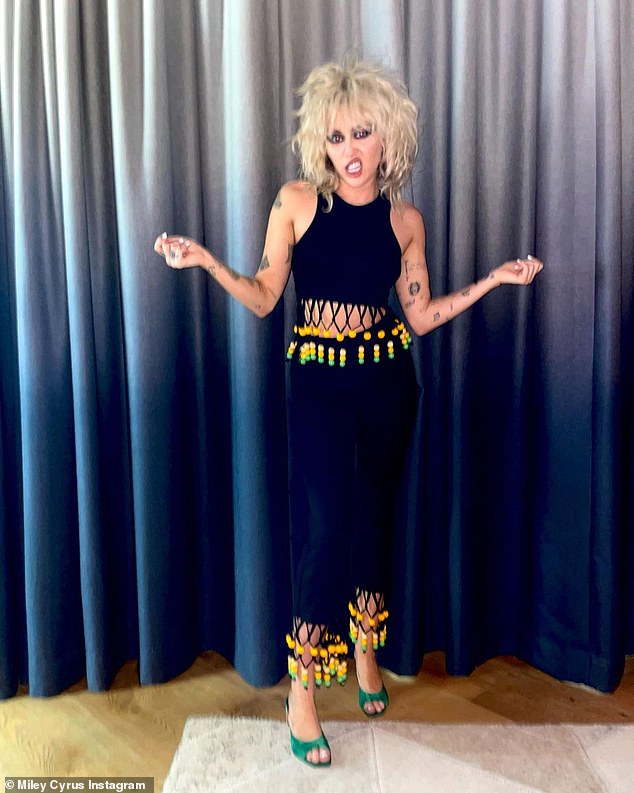 Going big! Miley  Cyrus showed off a very voluminous mane of platinum hair while joking ‘Everything’s bigger in Texas including my HAIR!’ ahead of her set at Austin City Limits 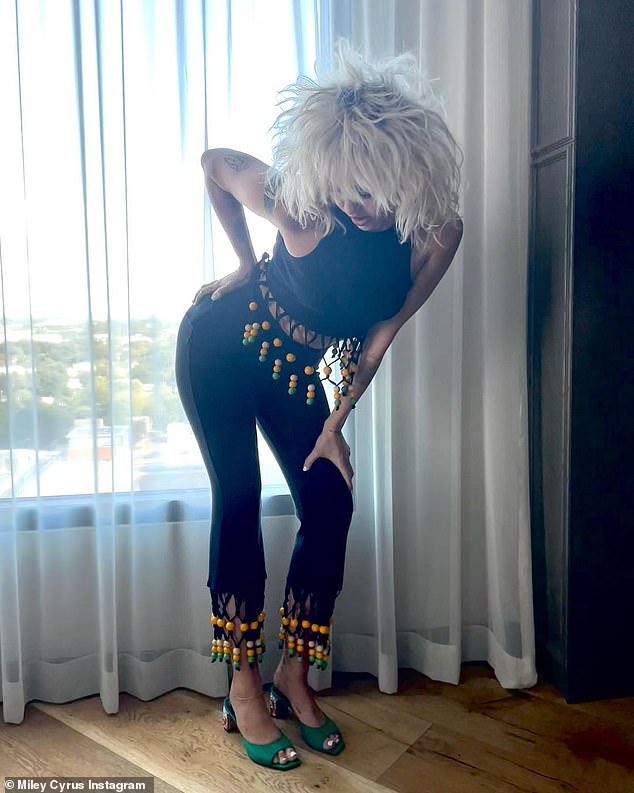 Southern belle: The Plastic Hearts singer was tapped to headline day one of the Austin City Limits Festival

The Tennessee native opted for a funky look before switching into costume, that included a black crop top and matching trousers, with fringe adorned with colorful beads.

She wore turquoise kitten heels and was glammed up with heavy eye makeup that featured s sparkly silver lid.

Miley switched up her poses as she stood against a curtain in her hotel room. In some images she squatted down and in others she popped her leg with her hand on her hip.

Her blonde locks were expertly teased in preparation for her headlining set on Friday on the Honda Stage, with George Strait being the other name on the bill. 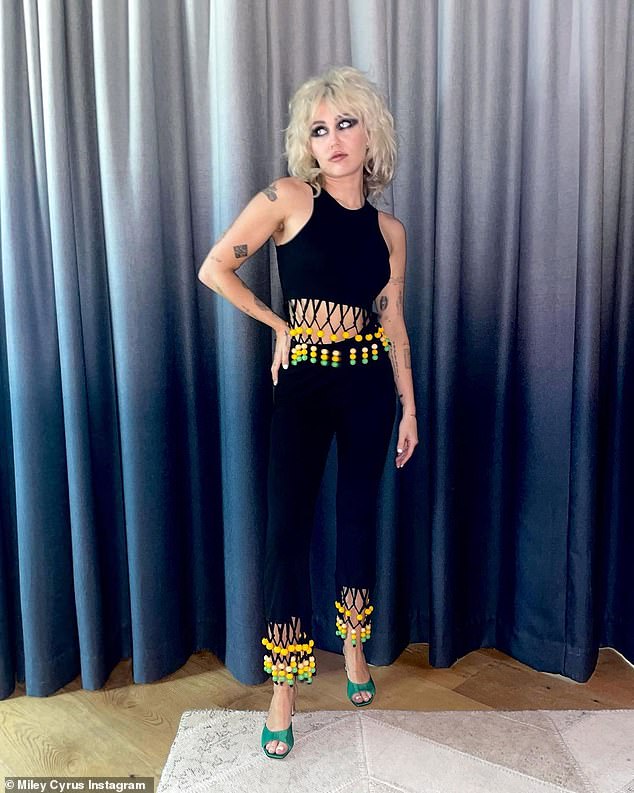 Pre-show: Miley opted for a funky pre-show look that included a black crop top and matching trousers, with fringe adorned with colorful beads 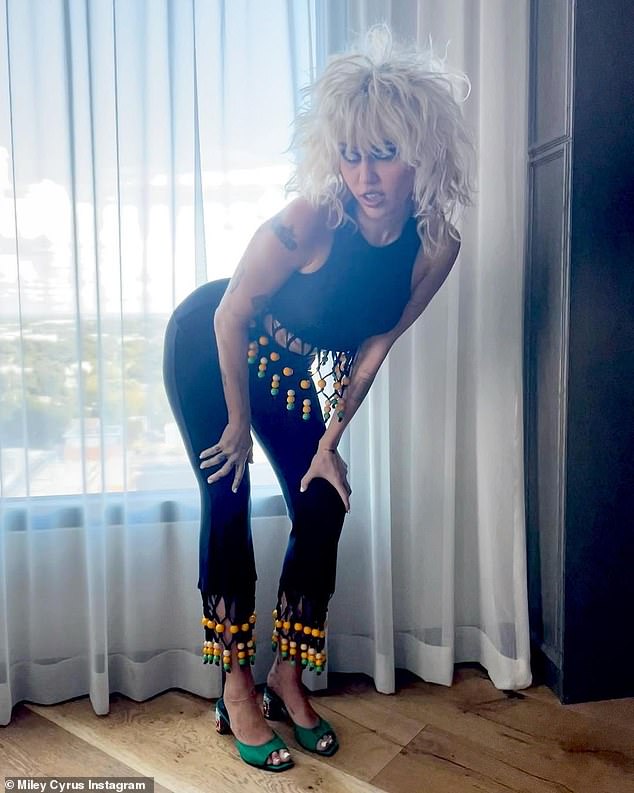 Firm hold: Her blonde locks were expertly teased in preparation for her headlining set on Friday 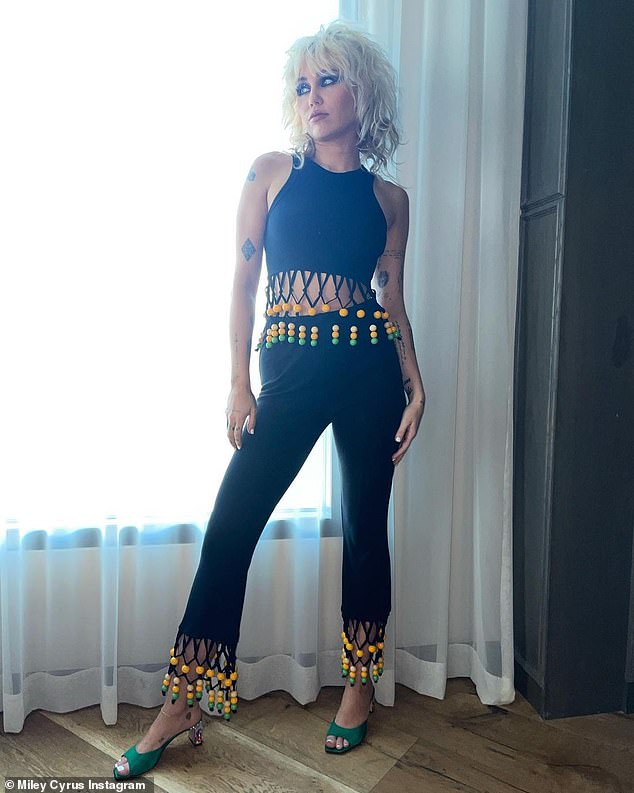 Versatile: Miley switched up her poses as she stood against a curtain in her hotel room 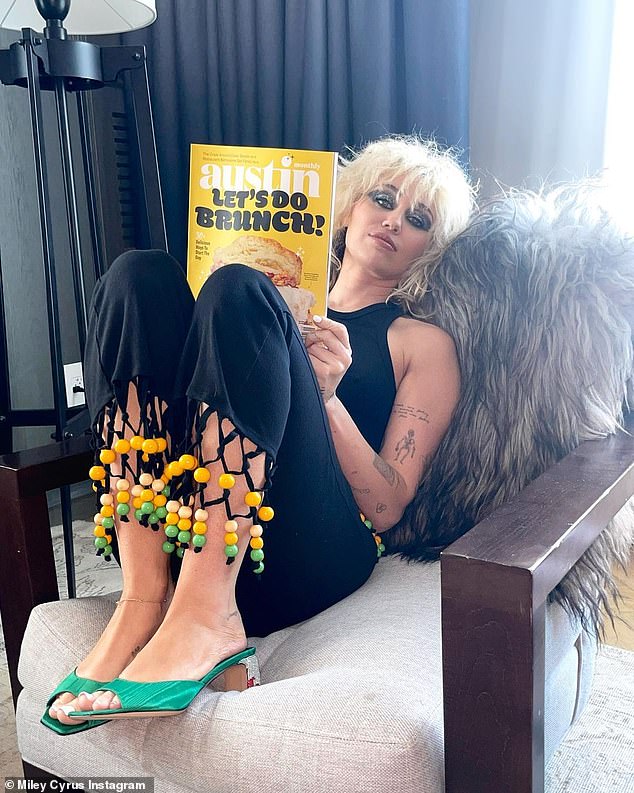 Relaxing: In another image she held up an attractions magazine

While at the festival Miley crashed Megan Thee Stallion’s set and twerked on stage with her briefly to audience cheers.

‘Dreams DO come true! Me and @theestallion doing hot girl s**t,’ Miley wrote as she shared footage of the surprise cameo to Instagram.

And during her own set Cyrus performed some of her newer material like WTF Do I Know and Nothing Breaks Like A Heart, as well as fan favorite classic See You Again. 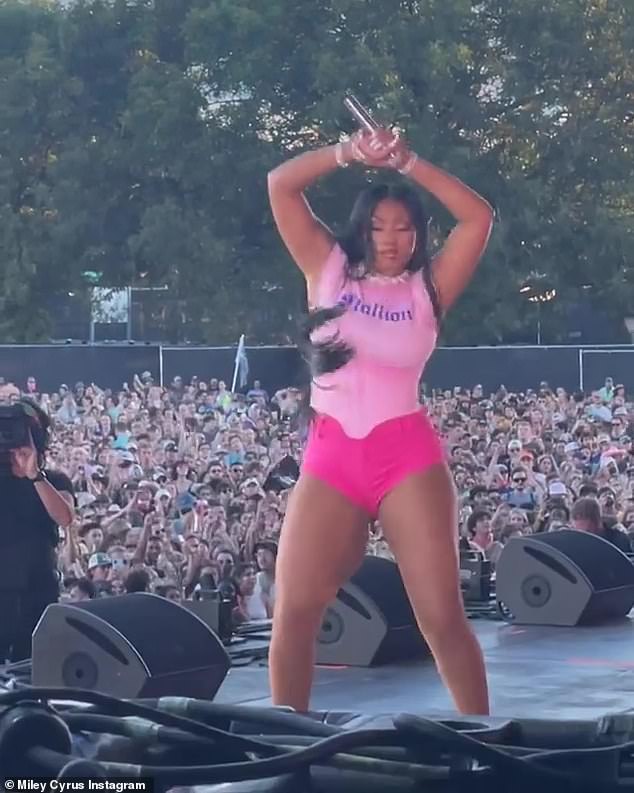 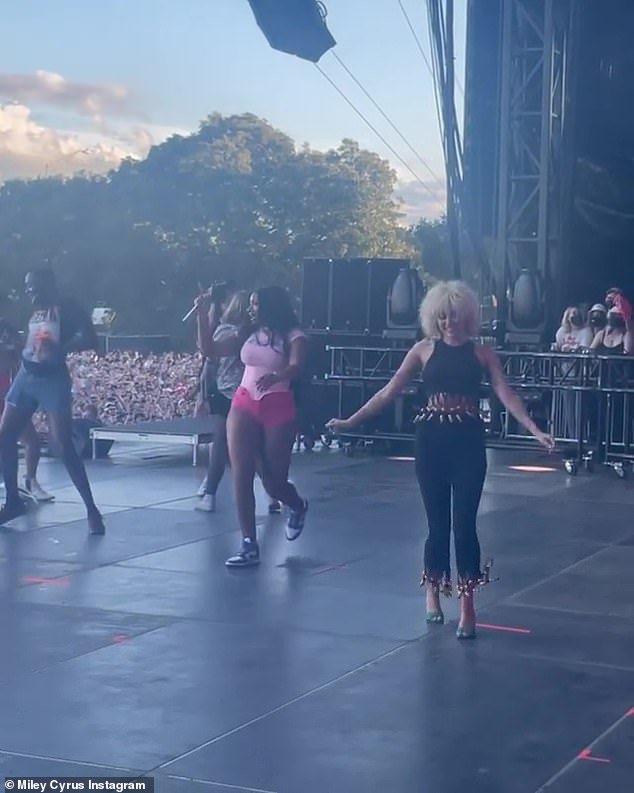 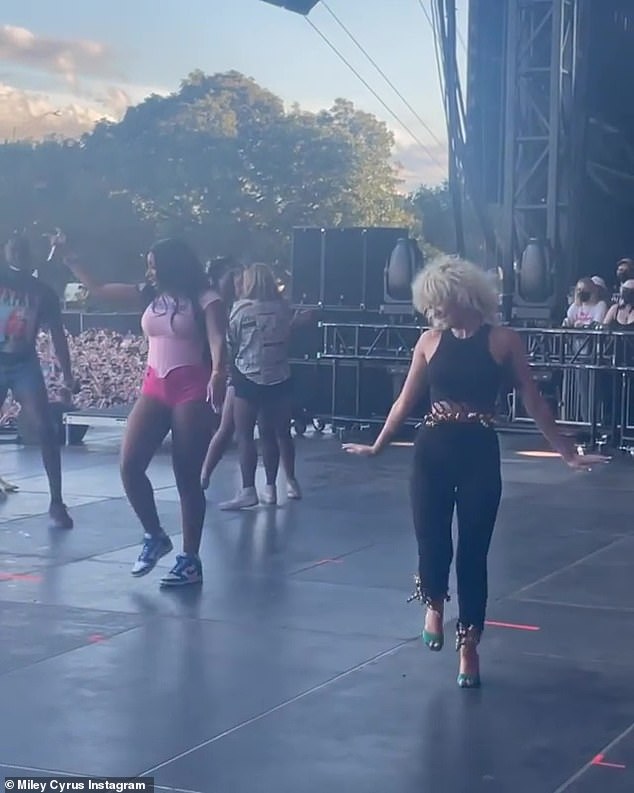 Bringing the noise: As she appeared on stage the crowd went wild at seeing the ladies share a moment

Celebrities in attendance to watch her perform included Shawn Mendes who was recorded singing along to her songs and snapping some photos.

The three-day event is set to feature Billie Eilish and Rufus Du Sol as Saturday headliners, with Tyler The Creator and Duran Duran as the two big names on Sunday.

Amid the ongoing COVID-19 pandemic, attendees were required to show a completed vaccination card or a printed copy of a negative COVID-19 test result obtained 72 hours before the event. 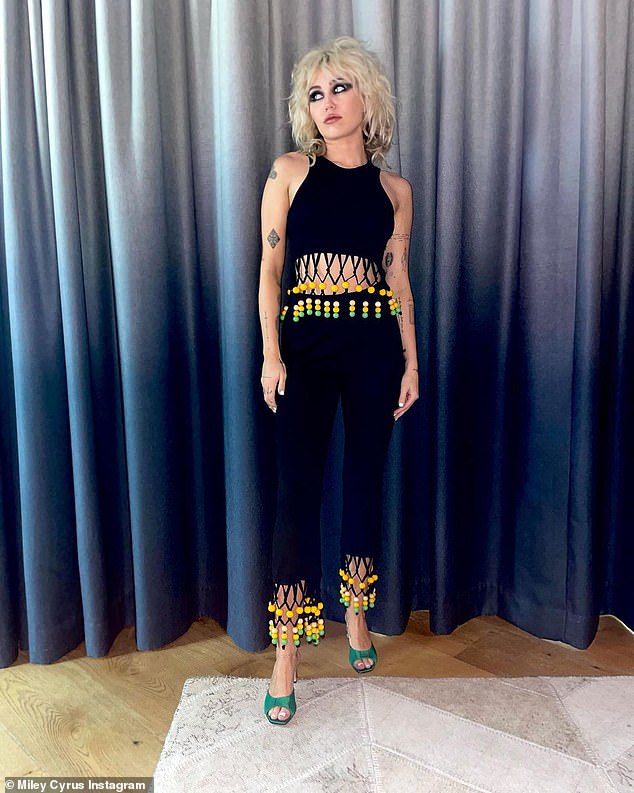 Gearing up: During ACL set Cyrus performed some of her newer songs in addition to fan favorites like See You Again 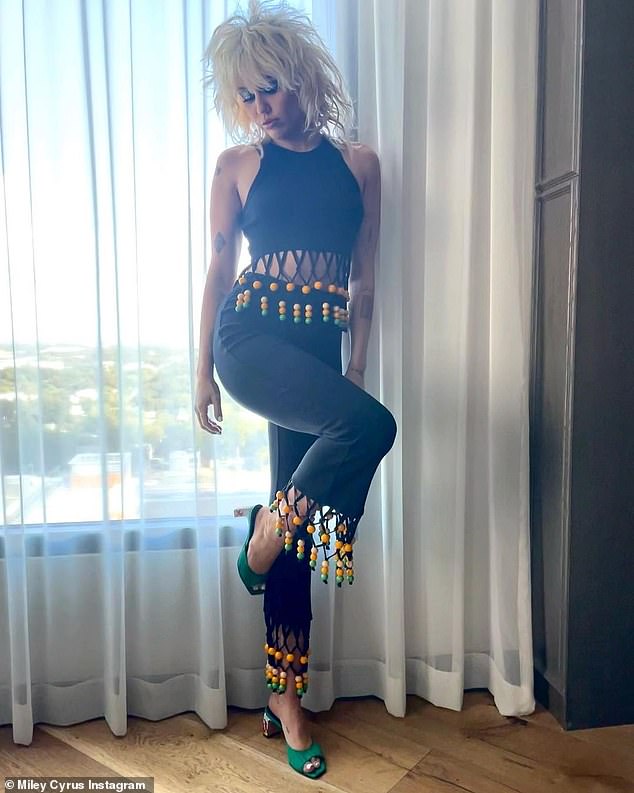 Leg pop: The singer popped her leg in her cutesy set in one snap