Mindy Kaling, 42, wows in a racy dress with a sky-high slit as she continues to show off her dramatic weight loss

Mindy Kaling showed off her sensational figure as she rocked a clingy lavender dress in new snaps that she shared to Instagram on Thursday.

The 42-year-old sitcom star’s one-shouldered ribbed bodycon dress featured a daring side slit that went up to the actress’s hip. 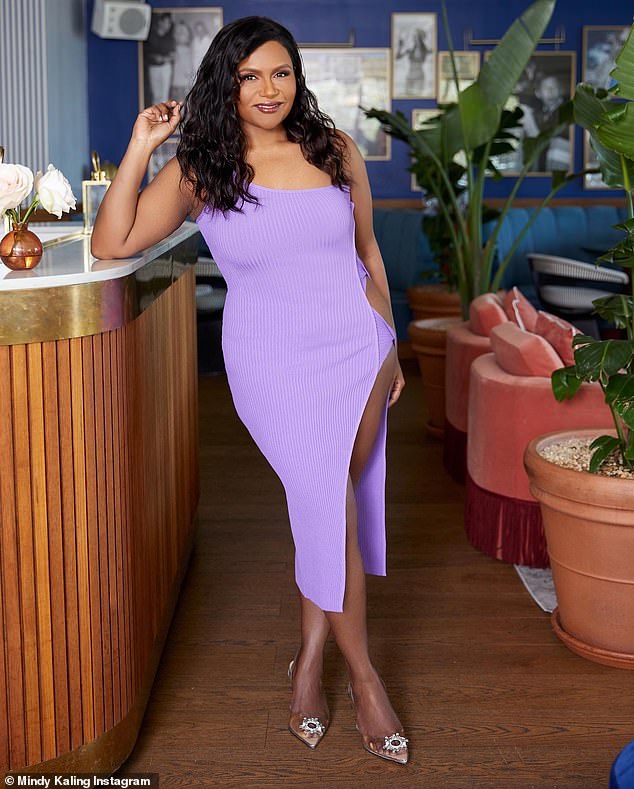 Sizzling: Mindy Kaling showed off her sensational figure as she rocked a clingy lavender dress in new snaps that she shared to Instagram on Thursday.

The beauty’s raven locks parted on the side and down in loose curls that cascaded over her shoulders.

The comedienne sported gold pointed-toe heels that were embellished with silver metal stars. 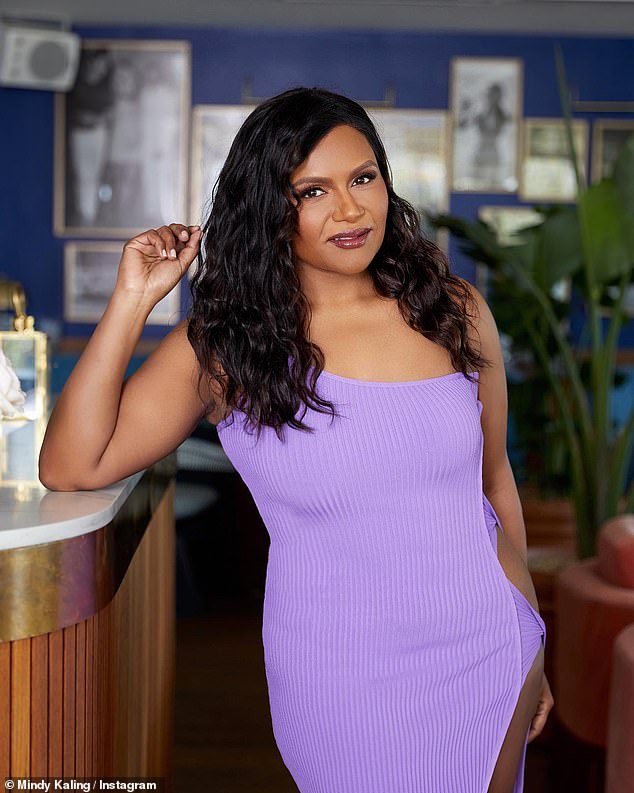 Racy: The 42-year-old sitcom star’s one-shouldered ribbed bodycon dress featured a daring side slit that went up to the actress’s hip 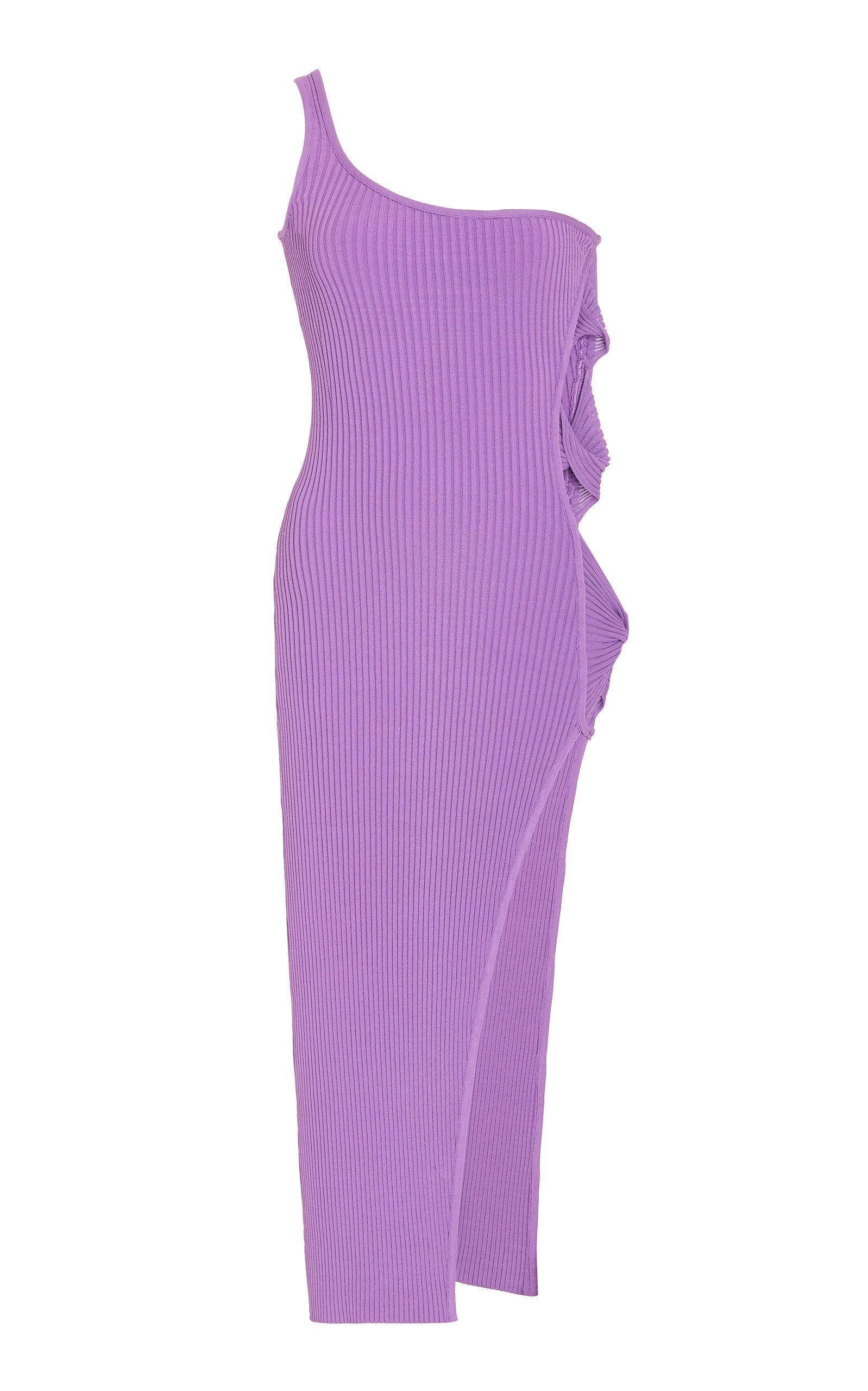 She gave the camera a slight smile as she rested her elbow on a bar and posed with her legs crossed.

The Why Not Me? author’s post was flooded with enthusiastic comments from her celebrity pals and fans.

One follower asked, ‘@mindykaling, is pelvic skin the new side-boob? I love it. So gorgeous.’ 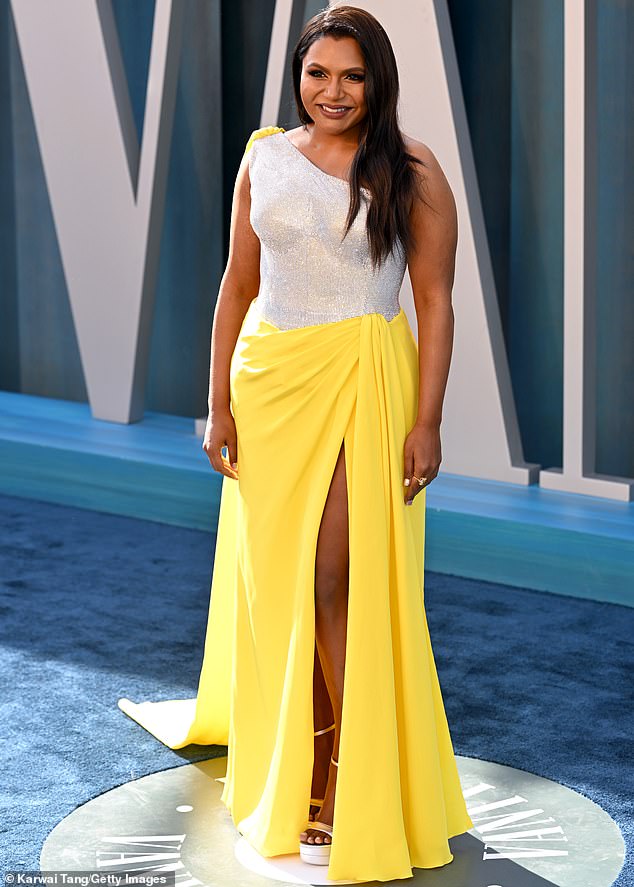 Looking fab: Mindy recently revealed she achieved her stunning recent weight loss by continuing to ‘eat what I like to eat’ – but ‘less of it’; seen in March at the Vanity Fair Oscar party

Poorna Jagannathan added,’Is that side a** I see? It’s fantastic.’

Over the past few months, Mindy has been showing off her svelte frame in a string of figure-hugging ensembles on Instagram.

The star recently revealed she achieved her stunning weight loss by continuing to ‘eat what I like to eat’ – but ‘less of it.’

However while discussing her current diet with Entertainment Weekly she shared: ‘Honestly, I didn’t really do anything differently.’ 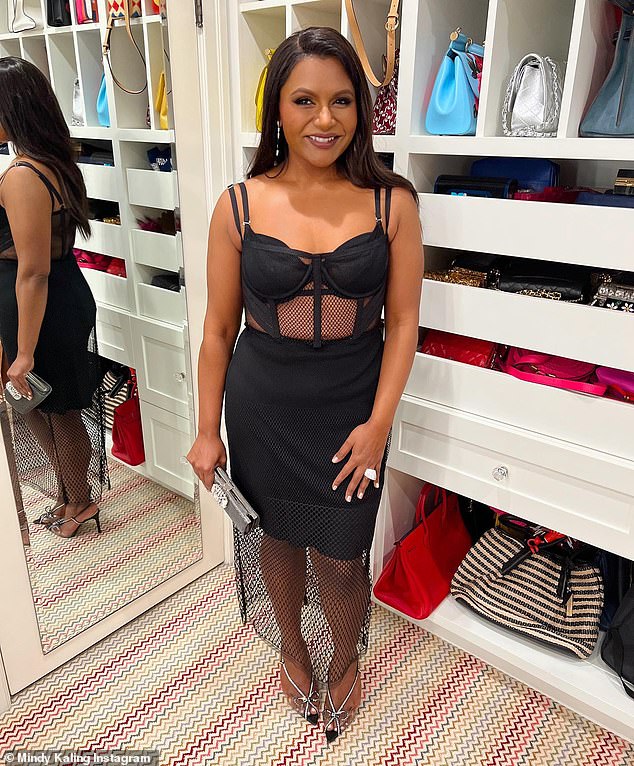 Making a splash: She showing off her svelte frame in a string of figure-hugging ensembles on Instagram

The performer dished: ‘I eat what I like to eat. If I do any kind of restrictive diet, it never really works for me. I just eat less of it.’

Mindy, who recently shared a video of herself making gnocchi, did adopt a much stricter food regime to lose weight after welcoming daughter Katherine.

‘After I had my daughter I had to shoot a movie like two months later, so I was very much like: “Just give me grilled salmon and sautéed spinach. I’m going to eat that for three months,”‘ said the Mindy Project star.

Transformation! Mindy, left, with a smaller figure, and, right, with more curves to love in an elegant strapless satin gown in September 2021

Her movie Late Night, a comedy she led alongside Emma Thompson, began filming in Canada in April of 2018 just four months after Katherine was born.

Mindy then welcomed her son Spencer in September 2020, but the coronavirus lockdowns meant she did not ‘have those pressures’ of losing weight for a movie.

‘It was this almost extended maternity leave. I wasn’t going to be on camera, the studios were shut down,’ the Oceans 8 actress said.

‘When the world started coming back a little bit I thought: “This kind of eating what appears, not taking any consideration for what I’m eating is probably not the way to go,”‘ she reflected during her new interview. 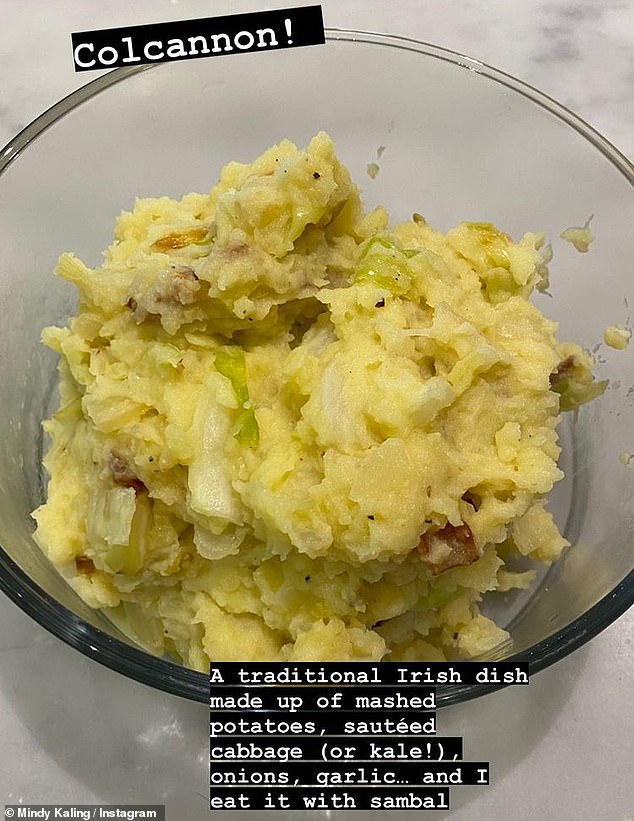 ‘A traditional Irish dish’: Mindy also occasionally fires up her social media to treat her fans to pictures of some of the culinary delights she whips up 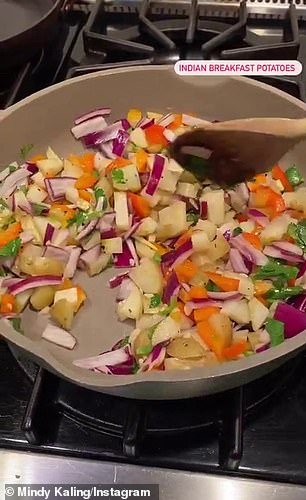 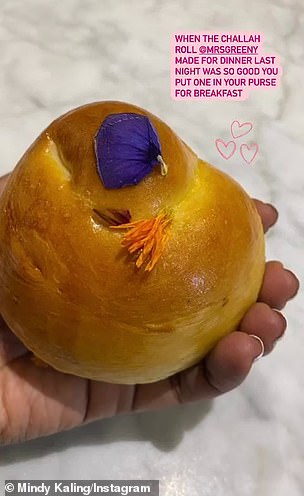 Yum: Mindy recently revealed on her Insta Stories that amid her stunning weight her diet includes potatoes, which she filmed herself cooking with vegetables for breakfast

Looking back on the outfit, she quipped that her children ‘normally think of their mom and: “Oh the slob that writes on her computer all day.” But when I had to get ready for all of these events, [to] my daughter I was like Elsa from Frozen.’

Said she: ‘I became completely transformed and she treated me completely differently. She was in awe. That’s really funny. I think, because of the pandemic, I hadn’t been getting dressed up as much. That was kind of fun, to wow her now and again. She is just at that age where that stuff is kind of interesting.’

Mindy has been famously tight-lipped about her love life and has not even publicly named the father of either of her two children.

‘My feeling is that until I speak to my daughter about that, I’m not going to talk to anyone else about it,’ she said after Katherine was born. 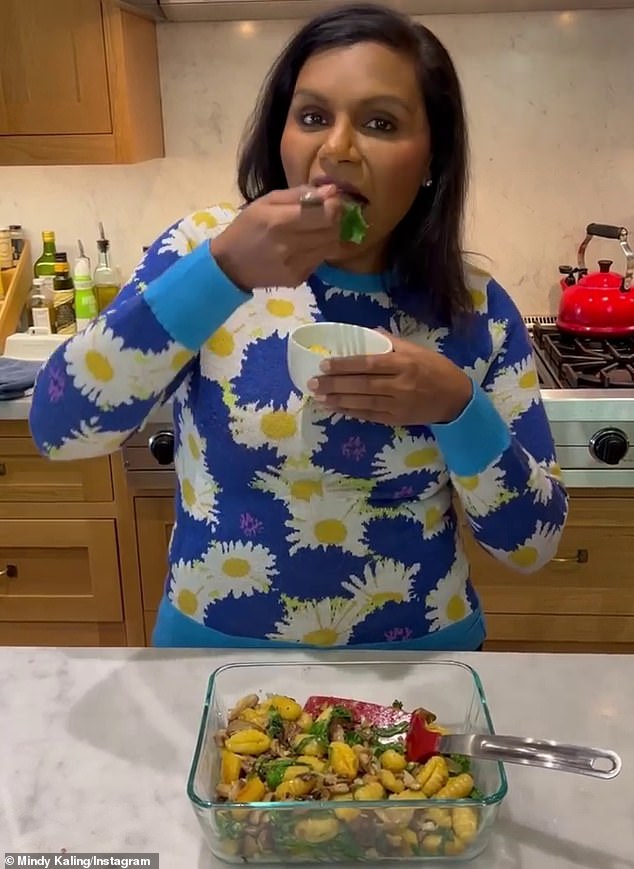 Mouth-watering: Mindy recently treated her public to an Instagram video of herself making sheet pan gnocchi and sharing her recipe

Mindy did not even announce her second pregnancy until she had already delivered Spencer and credited the coronavirus lockdowns with helping her keep her secret.

‘I mean, clearly, I was not going anywhere, like everybody else, so nobody found me out. So that was kind of easy,’ she told Elle.

Mindy recently revealed on her Insta Stories that her diet still includes potatoes, which she filmed herself cooking with vegetables for breakfast.

She also included a snap of some challah she confessed she had slipped into her handbag during a dinner she attended the previous evening. 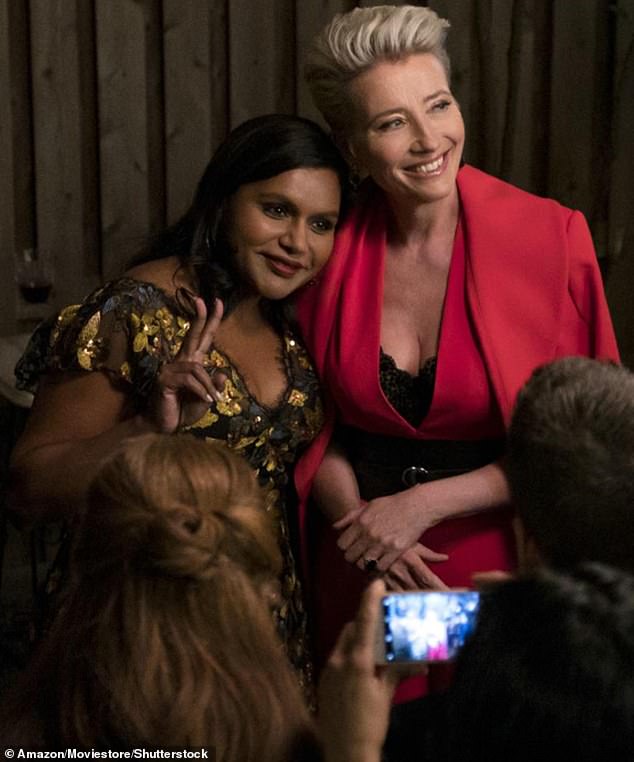 Wow: Mindy adopted a diet of ‘grilled salmon and sautéed spinach’ for a movie after delivering her daughter; her film Late Night (pictured) began shooting four months after the birth

Nearly a year ago she gave Shape magazine an interview and said she would be adopting a less constraining attitude to food.

‘I would love to be the size I was when I was 32 or something, but I just refuse to beat myself up about it,’ she said. ‘I love to eat at restaurants, I love to eat home cooking, and I don’t like restricting my diet.’

She shared that ‘as long as I’m getting enough nutrients and feeling like my heart and my lungs are really getting exercise, I don’t really beat myself up about that.’