All of the work in Yeh’s pizza dish is on the front end and it’s quickly done.

The Girl Meets Farm star’s recipe is inspired by the classic French dish of ratatouille that’s traditionally made with tomatoes, zucchini, peppers, and eggplant. Yeh’s pizza version is “loaded with fresh sweet veggies and burrata and roasted garlic. It is delightful,” the culinary personality says on the Food Network video, below, for this recipe. 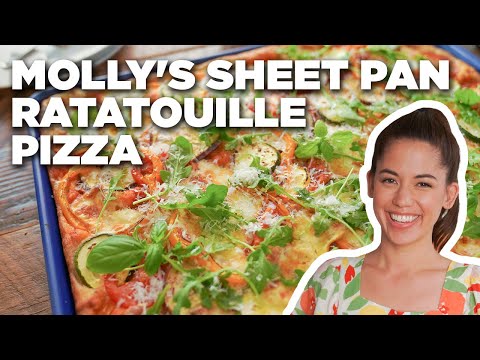 Molly Yeh’s French-Italian dish is so easy to make

All of the dry ingredients for the dough are mixed in a stand mixer, followed by the wet ingredients. It’s combined “until it’s smooth and still slightly sticky.” The dough is then scraped into an oiled bowl and allowed to double in size, “about one to two hours.”

Generously grease a sheet pan with olive oil: “Don’t hold back with the olive oil; it makes the crust a little bit crispy and kind of fried on the bottom and really good.”

Once the dough is “poufed and fluffy and ready to shape,” the dough is stretched “all the way to the edge” of the pan. It’s covered with a towel “for one more little rise,” and in the meantime, the ratatouille veggies are prepped.

The veggies in Yeh’s pizza make the dish sing

Slice and salt all of the veggies to give them time to “drain and get the moisture out because I don’t want any excess moisture weighing down my pie.”

The garlic oil is drizzled on the dough on the sheet pan followed by the marinara sauce, of which Yeh uses just a small amount: “I want the ratatouille veggies to be the star of the show.”

Arrange the sliced veggies on the dough along with the herbs (“The earthiness of these herbs complement these veggies really nicely”) and the burrata is torn and placed on the veggies, finishing it with a little more oil.

It’s baked in a 450-degree F oven for about 25 minutes, “until it’s golden.” Parmesan cheese and flaky salt are sprinkled on the finished pizza, along with the fresh arugula “for a peppery crunch” and fresh basil.