Mrs Hinch has announced that she’s expecting her second child with husband Jamie.

The Instagram sensation, 30, who is already mum to her son Ronnie, revealed the happy news on Friday.

She penned: ‘It is often in the darkest skies that we see the brightest stars ✨ Baby Hinch Number 2, We can’t wait to finally meet you ❤️ 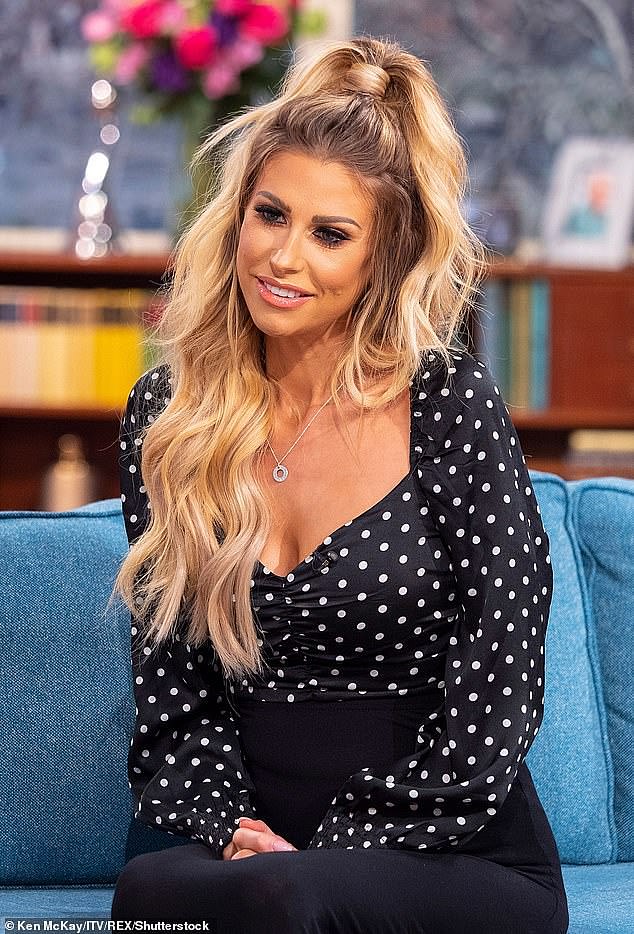 ‘Happy New Year everyone… from our little family to yours… We hope your 2021 is filled with hope, health and happiness. We love you all.’

The star looked radiant as she shared a first glimpse at her blossoming bump under doting Jamie’s hand in the sweet post.

However it was their son Ronnie, 18 months, who stole the show as he sat grinning in front of the perfectly decorated Christmas tree holding a sign board. 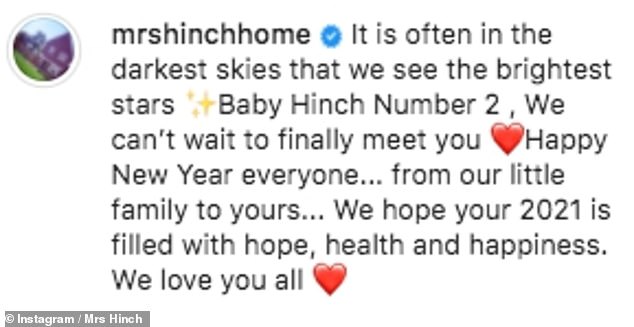 A VERY happy new year: Sophie, 30, wished her fans ‘hope, health and happiness’ as she revealed her pregnancy

Sophie also revealed her pregnancy on Stories, sweetly opening the last present under the tree and revealing sweet messages of thanks to her followers.

After teasing them with the kind words, Sophie span around a bauble to sweetly reveal her scan picture inside.

The couple welcomed Ronnie back in June 2019 and also dote on their dog Henry, often sharing snaps of both to Instagram.

Mrs Hinch shot to fame for her impressive cleaning hacks and has since gone on to write two books as well as an activity journal and list book. 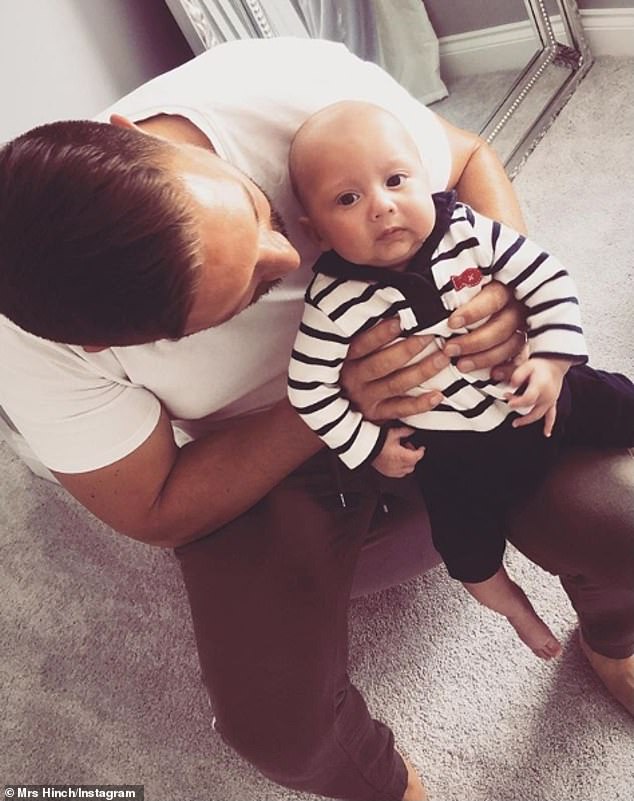 Bring on 2021: She also revealed the happy news on Instagram Stories (Jamie and baby Ronnie pictured)

Happy news: Sophie shared her excitement with her fans after revealing the news saying she was ‘crying and shaking’ 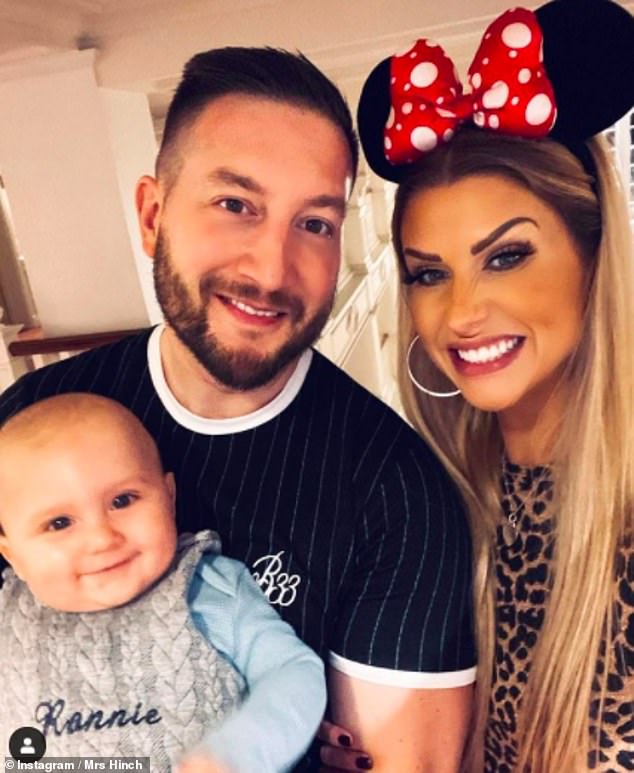 As well as sharing regular insights into her cleaning routine, Mrs Hinch has become good pals with Stacey Solomon – who herself celebrated happy news at Christmas when she got engaged to long-term beau Joe Swash.

The media stars grew even closer in 2020 and managed to throw a superhero-themed party for their sons, Rex and Ronnie, who are the same age in October.

The happy announcement comes after the cleaning queen posted old pictures from before her lengthy weight loss journey on her Instagram stories on Wednesday.

Sophie jumped on a viral trend where fans ask what pictures they want to see on social media. 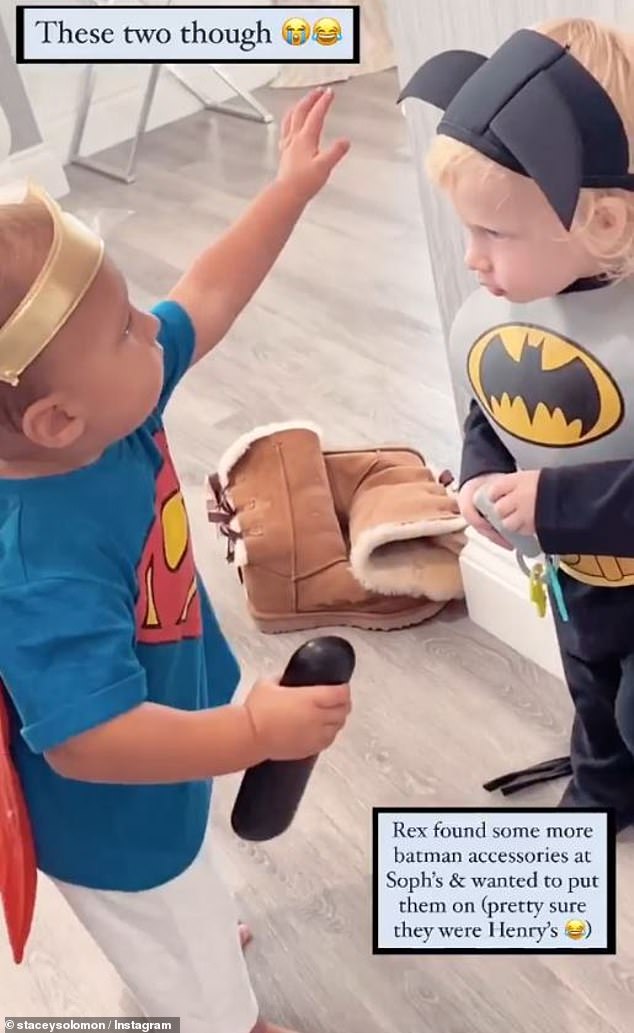 Best buddies: Sophie and Stacey Solomon have become great pals over the past year, with their sons Ronnie and Rex often playing togegher

Responding to one fan who asked for a photo before her weight loss, Sophie posted a montage of ‘before and after’ snaps.

One throwback snap saw the stunning TV star posing in a pink floral skirt and a black T-shirt and cardigan, prior to her eight-stone weight loss.

And a comparison snap saw Sophie grinning in a skimpy black cut-out swimsuit as she showed her 3.9million followers the results of her weight loss journey.

Sophie looked almost unrecognisable in the throwback snaps, which saw her sporting dark brunette locks rather than her now signature blonde tresses. 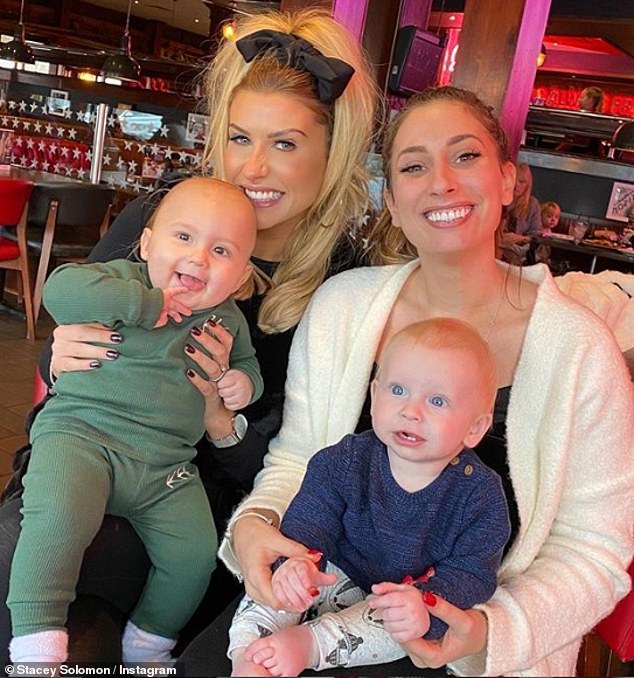 Growing up together: The two boys are the same age

Alongside the post, she candidly penned: ‘You never really know someone’s journey.. Always be kind xx’

In July, the author opened up about her weight loss as she proudly displayed her arm scar from excess skin removal in an empowering Instagram post.

She underwent excess skin removal in 2016, following her £6,000 gastric band surgery, which left her in agony when it slipped two years later and wedged in her oesophagus.

Alongside the snaps of her arm scar, she wrote: ‘In all honesty, I also like this dress because it also covers my arms.

‘Lots of you already know about this because it’s written in my first book but I had surgery on my arms once so I of course have been left with scarring but this dress makes me feel like my arms are covered.’ 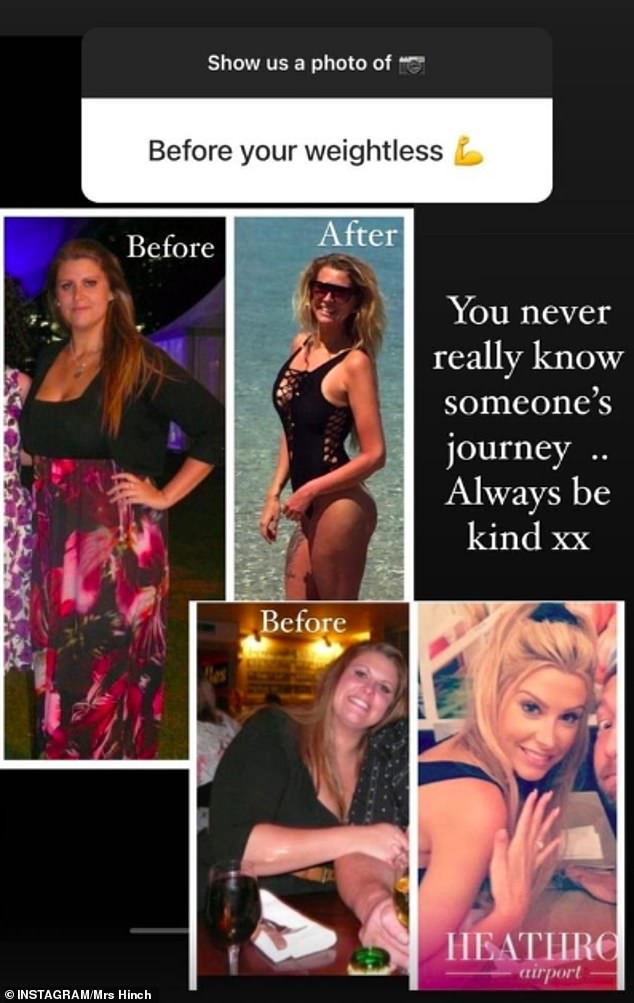 Zooming in on the scar, she continued: ‘Maybe this is a strange picture but… THIS IS ME and I think it’s so important for people to remember that everyone has their own story to tell, we are all special in our own way.’

Sophie has previously spoken about her ill-fated decision to have a gastric band fitted in an interview with the Daily Mail.

She said: ‘The surgery works for some people. But for me, if I had known the complications and risks, I wouldn’t have done it.’

Surgeons were able to move the band during an emergency operation. It no longer works but has not been removed.

After battling issues with self-confidence, Sophie piled on weight in her late teens and aged 21, she took out a bank loan to pay for the gastric band procedure.

But in addition to the slipped band, her dramatic eight-stone weight loss left excess skin on her arms.

An operation to remove it in 2016 led to a serious infection and for a time she feared her left arm would have to be amputated.

In her book Hinch Yourself Happy, she said: ‘I kept getting problems with excess skin. It was getting inflamed and blistering. It was painful.

‘If I bought a size 10 or 12 top or jacket in a shop, it would fit me everywhere else but not the arms. I was smaller but I still couldn’t buy clothes in the size I actually was.’

After getting the skin removed, she developed an infection on her left arm, which caused both arms to ‘blow up to three times their size’.

Sophie wrote: ‘They had to drain them urgently and blast the IV with antibiotics. I ended up staying in hospital for two weeks and I genuinely thought I was going to lose my left arm at one point.’ 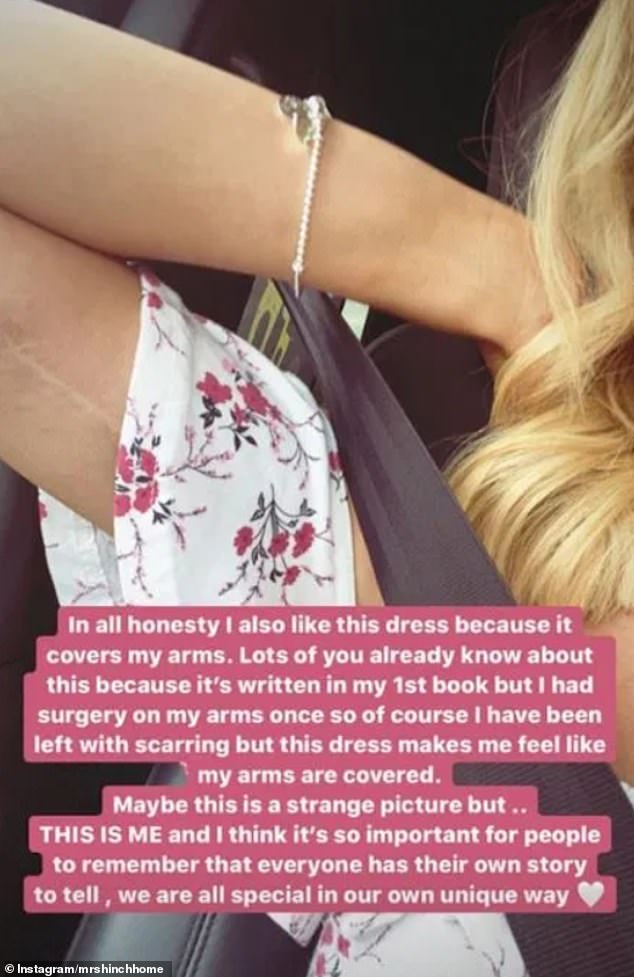 Brave: In July, the author opened up about her weight loss as she proudly displayed her arm scar from excess skin removal in an empowering Instagram post