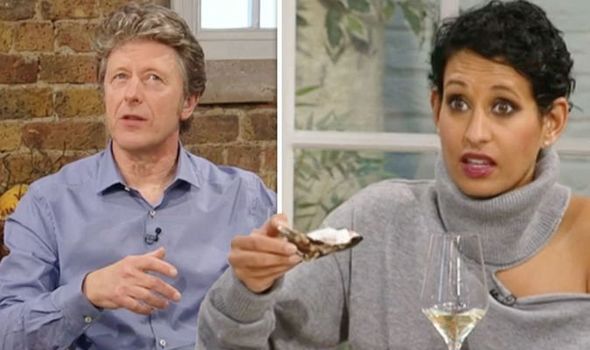 Naga Munchetty, 45, has aimed a mischievous jibe at her BBC Breakfast co-star Charlie Stayt, 58, while the duo tried raw oysters together on today’s episode of Saturday Kitchen.

Naga pointed out that oysters are believed to be an aphrodisiac, which is a substance that increases sexual desire, sexual pleasure, or sexual behaviour.

However, the journalist teased that tucking into the shellfish could have a similar affect and may make her and Charlie “like each other”, as they are known for their bickering and banter on-air.

Host Matt Tebbutt, 47, revealed that Naga had “demanded” oysters were served to herself and Charlie during their appearance on the BBC show.

He explained to viewers: “You two have got oysters in front of you because this was a demand from Naga.”

“It wasn’t a demand,” Naga insisted, before adding: “It was a polite request because the last time I was on with Yotam [Ottolenghi] I’d never had raw oysters and I was very, very nervous about having them.

“And the best way to have oysters, obviously, is to have brilliant chefs around you who tell you how to eat them and Yotam you introduced me to these.

“Matt had nothing to do with it,” she cheekily joked.

Naga then continued: “They were amazing and I’ve eaten them ever since.”

She then turned to her co-star and asked: “Charlie, do you like an oyster?”

“Well I’m going to give it a try,” the presenter replied.

Naga then divulged: “You know, they’re an aphrodisiac, so maybe if we both have oysters we’d…”

Matt quickly interjected to warn Naga over her choice of words due to the racy implications.

However, Naga quickly clarified what she meant by referencing the aphrodisiac fact.

She replied in reference to Charlie: “No, no, no!

“That might be a step forward eh?” The star quipped.