EXCLUSIVE: TV stars Nick Knowles and Jeremy Vine lock horns in a furious war of words on Twitter as they fall out over parking tickets

TV stars Nick Knowles and Jeremy Vine locked horns in a furious war of words on Twitter today after falling out… over parking tickets.

DIY SOS presenter Knowles, 60, had posted a photo of drivers being ticketed after attending a Xmas fayre in Cirencester, Gloucestershire and criticising the local council for handing out tickets on a Sunday.

Knowles said: ‘Congrats ⁦Cirencester⁩ & Gloucester cnclls You hold an Xmas fayre to get shoppers into town & when they do & car parks are full, you ticket everyone parked on a single yellow on a Sunday whole rows of them! Hell of a way to support local businesses by driving people away.’ 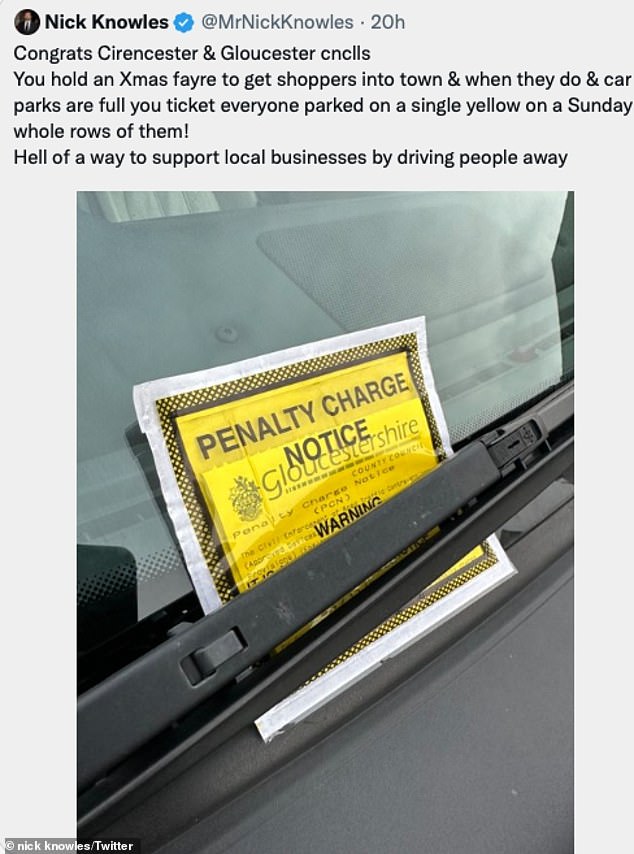 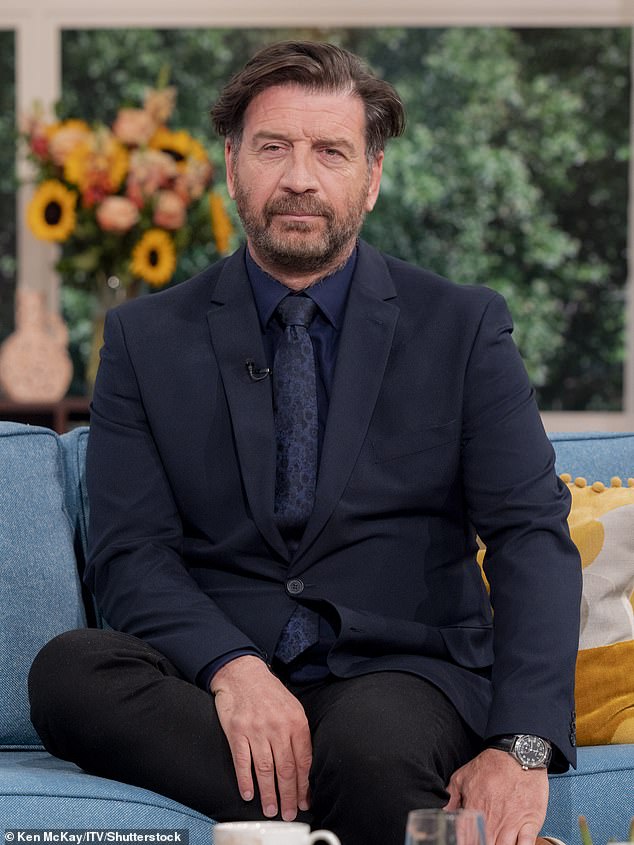 Knowles, 60, (pictured) posted a photo of drivers being ticketed after attending a Xmas fayre in Cirencester, Gloucestershire – and slammed the council for handing out tickets on a Sunday

But Vine, 57, who regularly tweets on behalf of cycling and cyclists, snapped back: ‘Excellent work. Children on foot are the priority, not adults wedging large metal cages into places they don’t fit.’

Knowles response was: ‘More city folk telling people in the countryside how to live’

The feud was eagerly joined by supporters and detractors of both men, weighing in with their own polarised contributions. 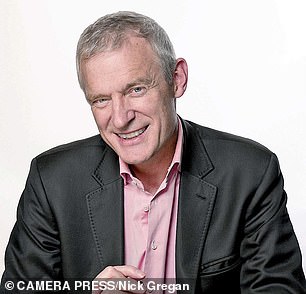 But Jeremy Vine (above) waded in saying children are the priority, not ‘adults wedging large metal cages into places they don’t fit’

One tweeted: ‘My wife is a traffic warden, the towns where she patrols that have a Christmas Market they are advised not to ticket unless parked dangerously. Seems some areas aren’t as sensible.’

But another said: ‘If you break the law you should get penalised right?’

County Councillor Joe Harris tweeted: ‘No one is being penalised for visiting the town – parking is free in all Cirencester car parks on Sundays. This is a ticket for breaking an on-street parking regulations such as yellow lines, no return within 1 hour etc.’

Knowles kept replying to comments from Vine supporters, firstly criticising those who had wrongly assumed that his own car had been ticketed, saying: ‘How angry do you have to be to call someone entitled without reading their tweets properly to see that it wasn’t my car I was talking about. Do you have family having to put up with your daily cynicism and miserable attitude?’

When another suggested: ‘Here is a solution – leave all your cars at home and walk to your local Christmas event. That way parking ( legally or otherwise ) is not an issue’, Knowles replied: ‘You obviously don’t live in a village.’ 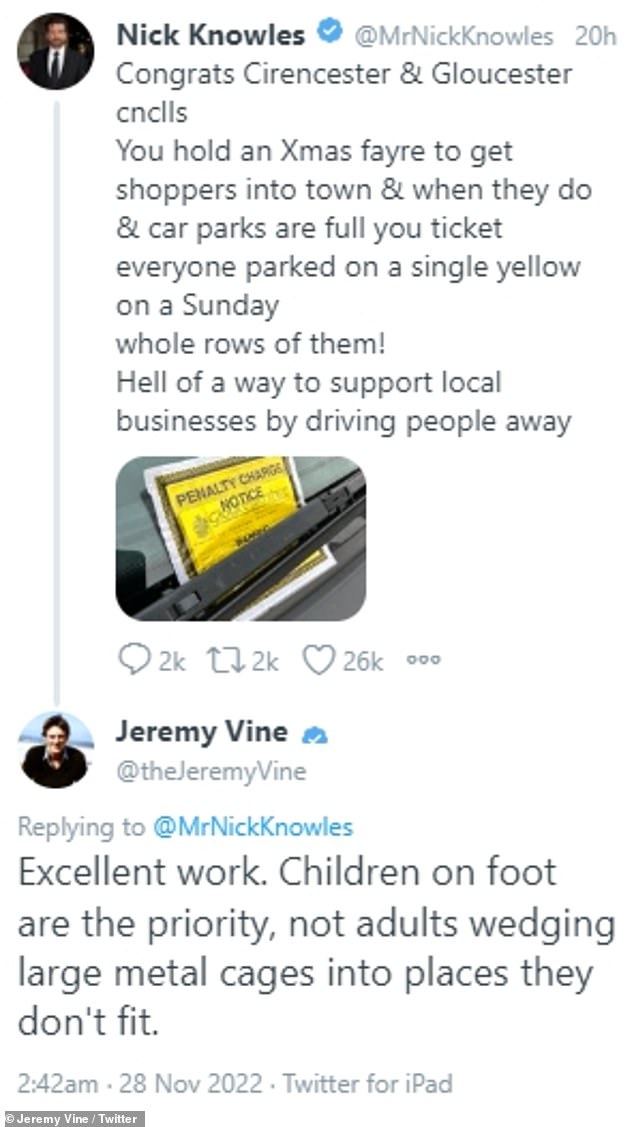 But Vine, 57, who regularly tweets on behalf of cycling and cyclists, snapped back: ‘Excellent work. Children on foot are the priority, not adults wedging large metal cages into places they don’t fit.’

But Knowles seemed amused by Vine’s intervention, tweeting that he believes Vine is still mad at him for a spat they had over a story about the police and takes criticism personally.

The long-running Twitter feud between the two men dates back to an equally frosty exchange in 2020 when Knowles called out Vine on comments he had made which he believed were suggesting Britain was becoming a ‘police state’.

Knowles responded to Vine in response to the backlash he (Vine) was receiving on Twitter: ‘Well if you were even handed with the police instead of grinding your axe every time you wouldn’t have the problem.

Vine then went on to list Knowles’ own motoring offences from the previous year when he was fined and banned from driving after being caught speeding at 85mph in a 70 zone and using a mobile phone, then jokingly asked the magistrate: ‘I can drive home, right?’.

Vine was scathing, saying: ‘Every day, five people die on the roads. Often the drivers who cause these deaths are simply not aware of consequences. The attitude that says a driving conviction is a joke is at the heart of the problem the police are trying to deal with.

‘Furthermore, virtue-signalling your support for the police at the expense of a fellow presenter only works if you have been law-abiding. Otherwise it’s hypocrisy.’

But a Knowles supporter called Tom disagreed, saying: ‘That’s a rubbish argument. The fact that he’s been on the receiving end of police action and is still supportive shows class.’ 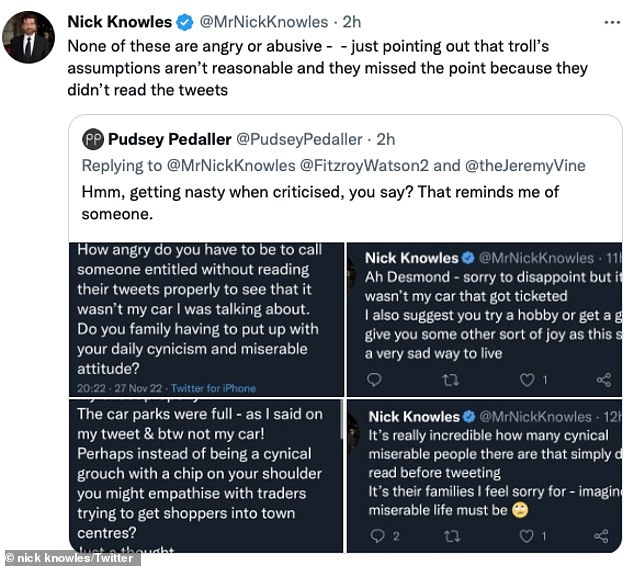 Tense: Knowles kept replying to comments from Vine supporters and retweeting them