She was on fire last week as she celebrated New York Fashion Week with her sister Paris.

But Nicky Hilton was ready to slow down on Wednesday when she was spotted looking playful in a pink dress while out with her three-year-old daughter Teddy.

The 37-year-old heiress held hands with the little girl as the arrived at the upscale Italian restaurant Cipriani for lunch together. 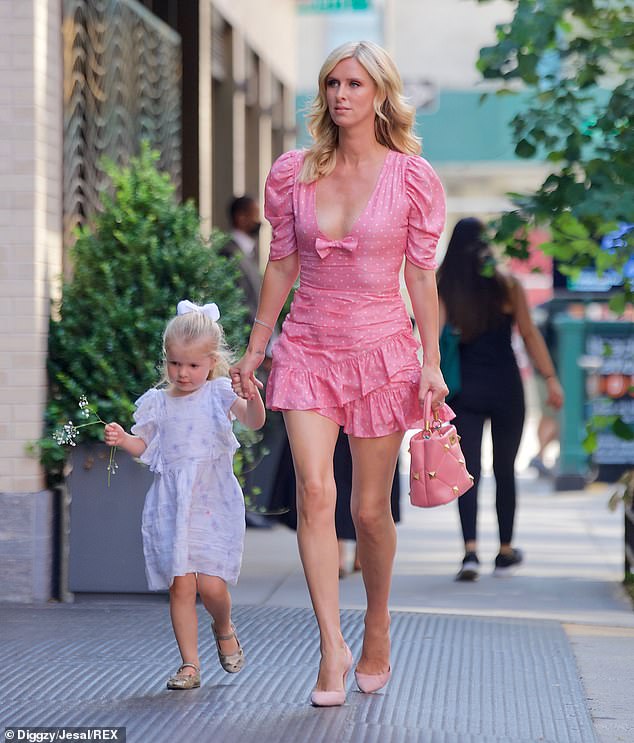 Tea for two: Nicky Hilton, 37, held hands with her youngest daughter Teddy on Wednesday as they dropped by Cipriani in New York City for lunch

Nicky looked gorgeous in her pink dress, which was covered in polka dots and featured a short, layered skirt that highlighted her toned legs.

The 5ft7in beautys’ low-cut outfit had a bow tied over her chest and featured puffy short sleeves.

She matched her dress with a pink Valentino Roman stud handbag, and she toned down the vibrant colors with a pale pink pair of pumps.

Her voluminous blond locks were styled in thick waves and cascaded down her back. 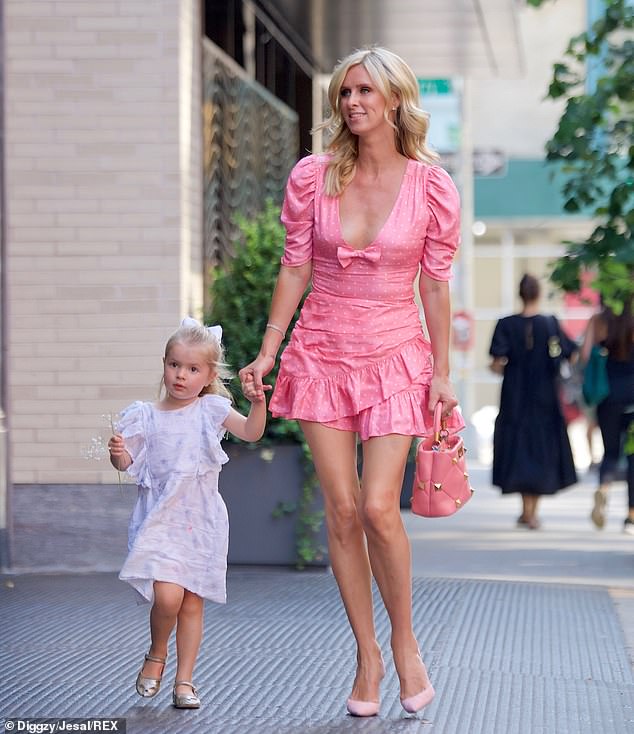 Pretty in pink: Nicky looked lovely in a plunging pink polka dot dress with a frilly skirt. She matched it with a studded pink Valentino handbag and modest pale pink pumps

Teddy was dressed in a pale lavender dress with her hair tied back in a white bow.

She carried small white flowers in one hand and wore cute silver shoes with little cat faces and ears over the toes.

Prior to her midweek family lunch, Nicky and her older sister Paris had been unmissable at New York Fashion Week events around the city.

Earlier on Wednesday she summed up the fashion extravaganza with a beaming photo of herself taken at night in Times Square.

She was decked out in a lovely pink-and-white Oscar de la Renta dress with a matching short jacket draped over her shoulders, as well as a silver handbag.

‘What a whirlwind week in NYC!’ she gushed. 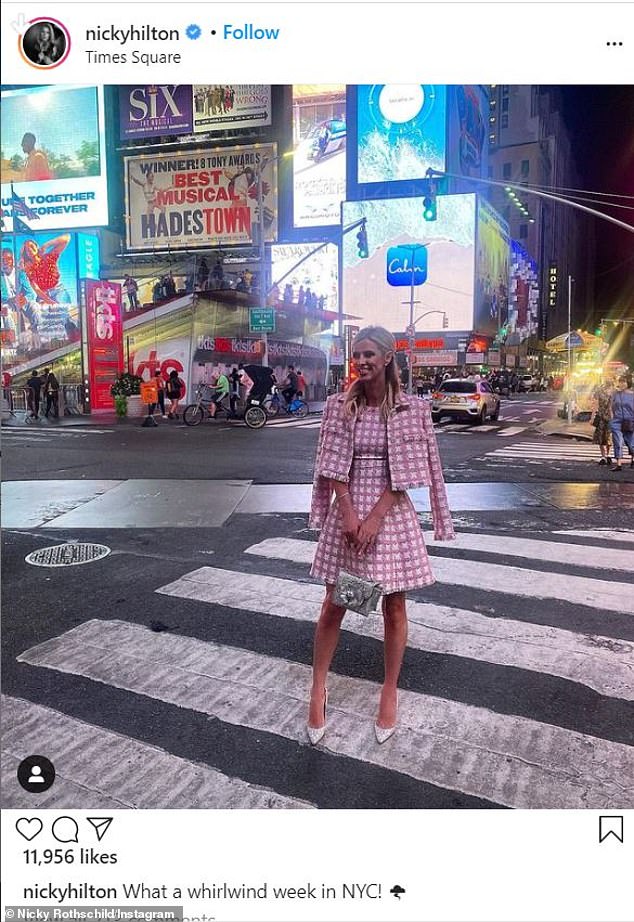 Made it to the end: She celebrated the end of New York Fashion week earlier on Wednesday with a photo of herself in a pink-and-white Oscar de la Renta dress taken in Times Square 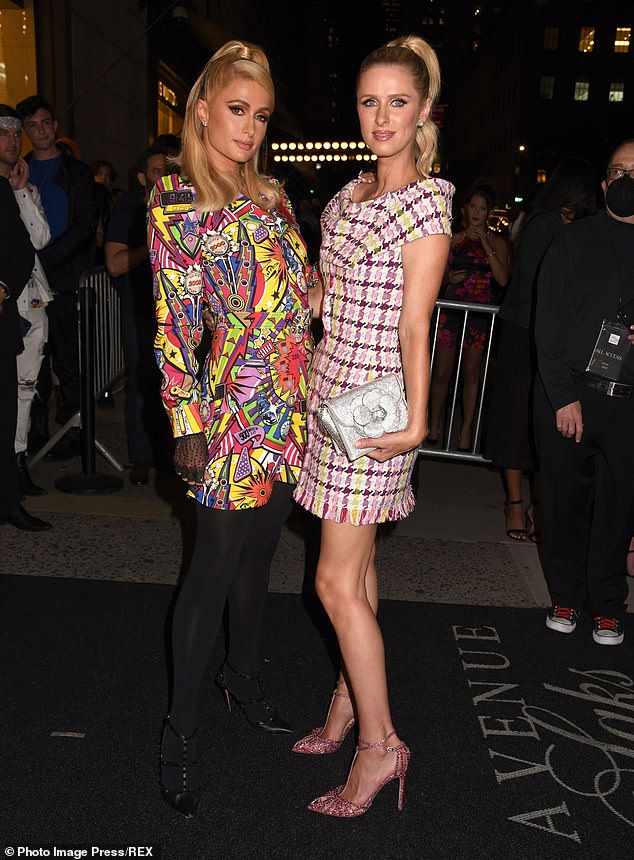 Stylish sisters: She and her older sister Paris Hilton, 40, were regular fixtures at several NYFW events; pictured together on Thursday

Over the weekend, Nicky helped Paris celebrate her upcoming nuptials to fiancé Carter Reum with an engagement party in the city.

Paris and the businessman have been dating since 2019, and they got engaged in February of this year.

The special moment coincided with the Simple Life star’s 40th birthday celebration on a private island.

This engagement is the fourth for the socialite, who was previously proposed to by model Jason Shaw in 2002, Greek socialite Paris Latsis in 2005 and actor Chris Zylka in 2018. 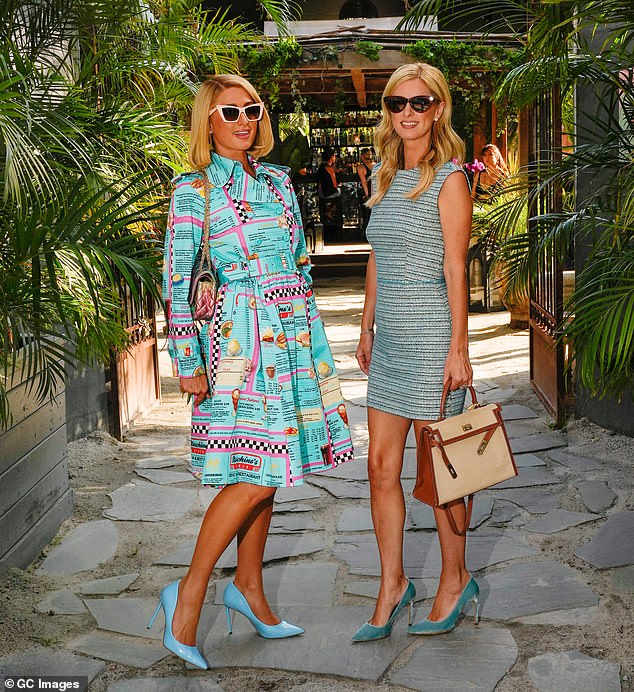 Sticking together: On Saturday, Nicky and her husband James Rothschild joined the reality star for a party celebrating her February engagement to businessman Carter Reum; seen on Friday