Sister of the bride! Nicky Hilton stuns in a pink gown as Paris Hilton’s doting Matron of Honor while giving heart-melting speeches

Nicky Hilton Rothschild looked absolutely stunning as she played the role of Paris Hilton’s Matron of Honor for the lavish nuptials on the evening of November 11.

The 38-year-old socialite continued to be her big sister’s right hand gal as she fluffed Paris’ Oscar de la Renta princess gown moments before she said ‘I do,’ and stood beside her at the altar.

For day one of the three day wedding extravaganza— which was held at grandfather Barron Hilton’s Bel-Air estate — Nicky and the other five bridesmaids wore custom pink Alice + Olivia dresses. 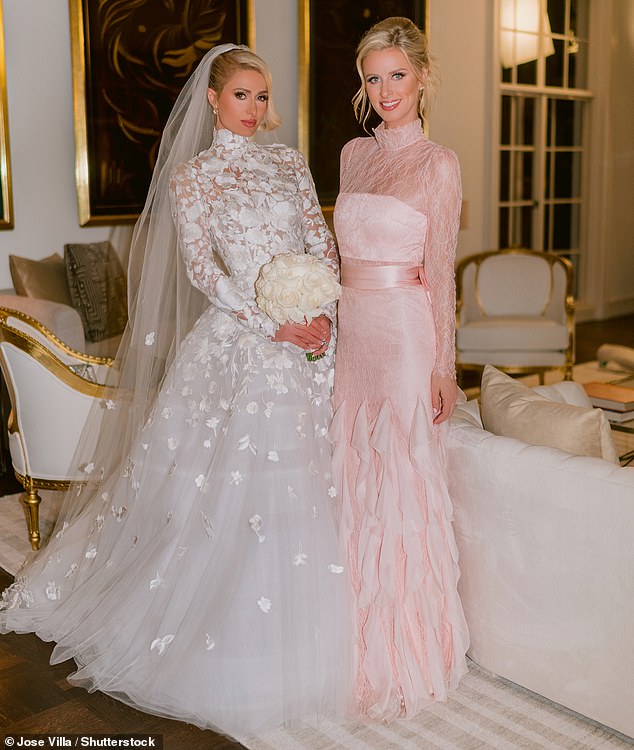 Sister of the bride! Nicky Hilton Rothschild, 38, stunned as Paris Hilton’s Matron of Honor in a custom pink Alice + Olivia gown for her lavish nuptials to Carter Reum on Thursday evening

Nicky was a vision in the blush pink lace gown which featured a slim silhouette and lightly ruffled bottom.

The custom garment stood out from the other bridesmaids’ oufits and included a pink silk bow at the back.

Her blonde locks were styled in an updo with soft tendrils hanging by her face and naturally she showed off expert makeup.

By Paris’ side every step of the way, she was seen helping with some last minute dress touches before she walked down the aisle with one of Reum’s groomsmen. 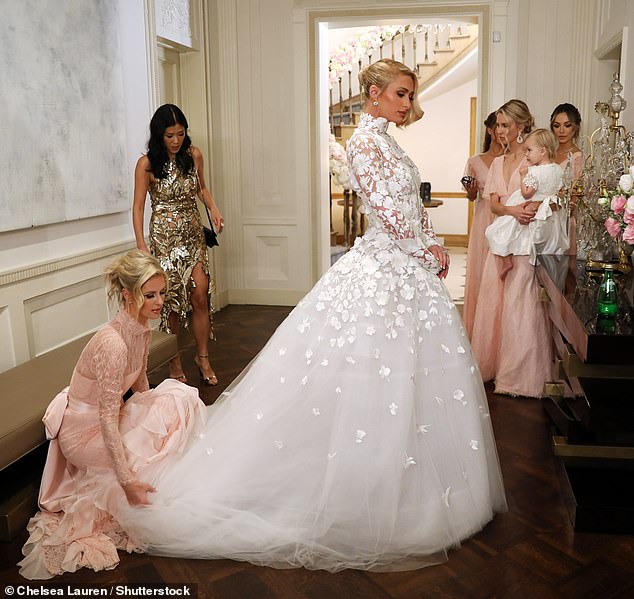 Helping hand: Nicky was seen doting on her big sister Paris just moments before she said ‘I do’ as she fluffed her custom Oscar de la Renta princess wedding gown 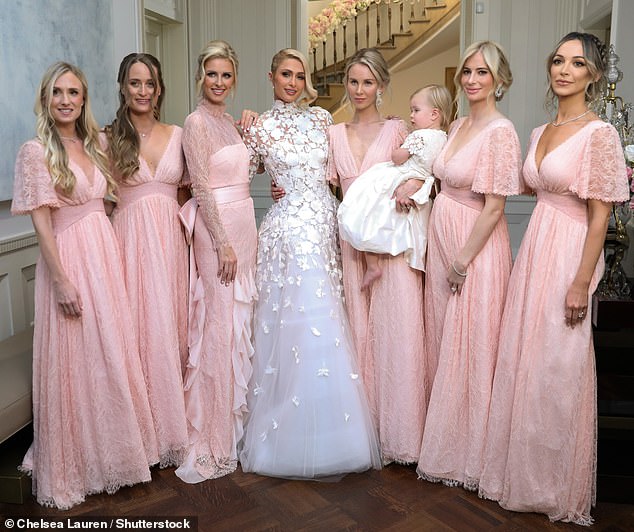 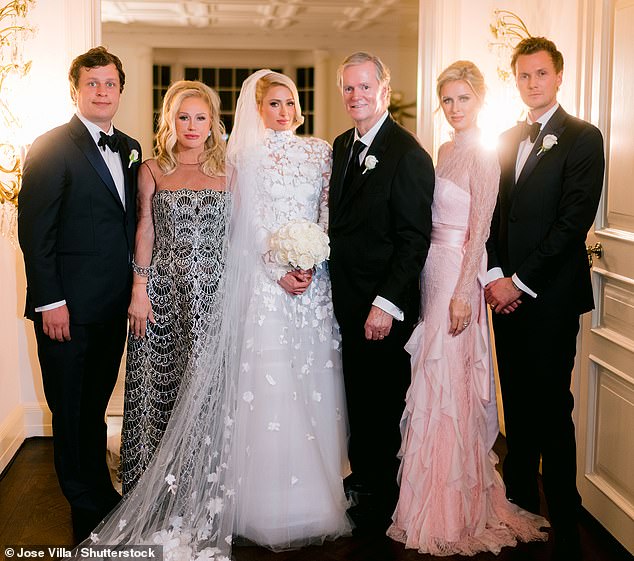 The Hiltons! The blushing bride took a photo with her immediate family which included brothers Conrad Hilton (left) and Barron Hilton (right) sister Nicky, and parents Kathy and Rick Hilton 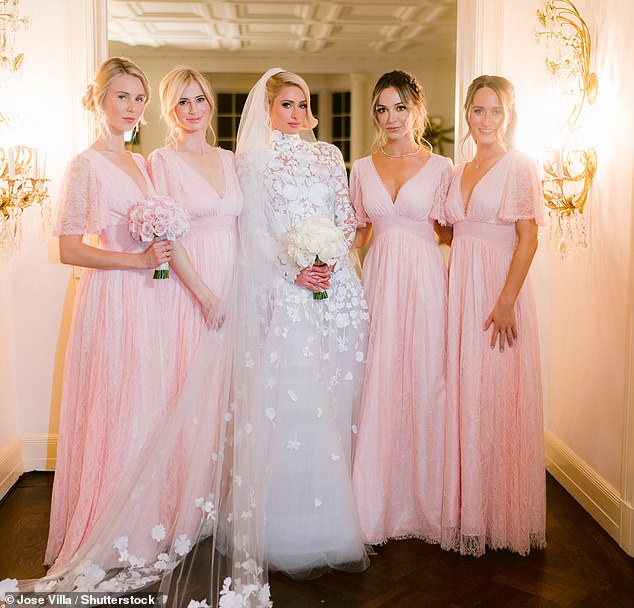 Following the ceremony, Nicky naturally made a speech where she addressed the room of more than 250 guests.

As detailed on Paris’ blog , Nicky gave one of five ‘sentimental’ speeches where she recalled anecdotes from their childhood and expressed her delight at Carter being so close to his family (like Paris).

The speech will certainly be chronicled on Paris’ newly released Peacock series Paris In Love, where Nicky had already given her two cents on how her sister should prepare for the big day. 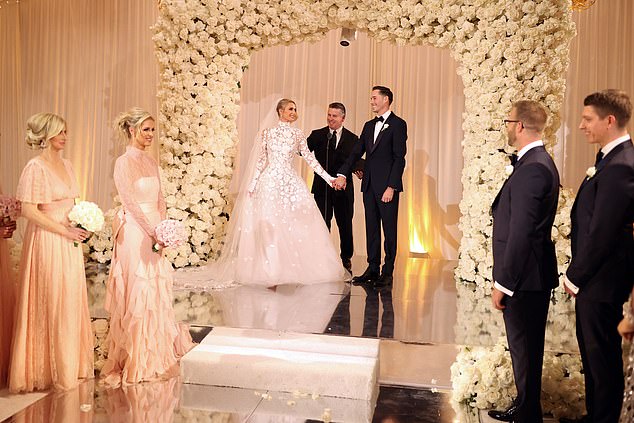 Right hand girl: Nicky was seen standing closest to Paris at the altar as she said ‘I do’ under an elegant canopy made of white roses fashioned by A-list party planner Mindy Weiss 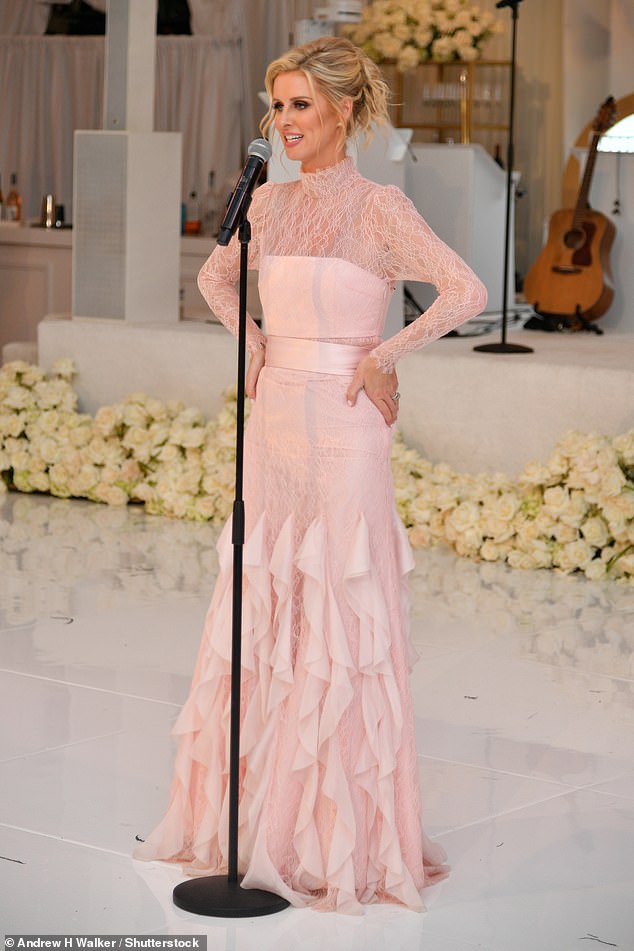 Speech: Following the ceremony, Nicky naturally made a speech where she addressed the room of more than 250 guests 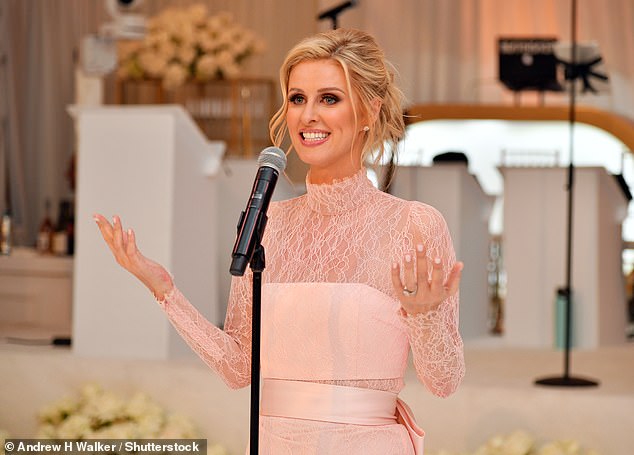 Memories: As detailed on Paris’ blog, Nicky gave one of five ‘sentimental’ speeches where she recalled anecdotes from their childhood among other things 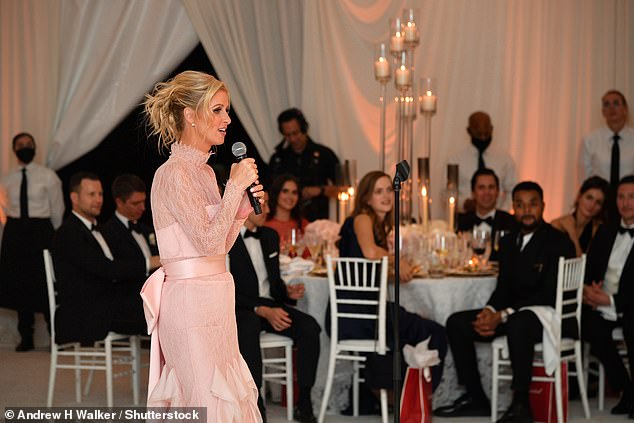 All eyes on her: The New York based socialite was seen commanding the attention of A-list attendees at the wedding reception

In the debut episode which aired on Thursday, Nicky told Paris ‘You need to make me one promise: No spray tan the wedding week. Look up Marilyn Monroe and all those beautiful women. They weren’t orange.’

Her bouquet was created by Mark’s Garden and the extravagant event was fashioned by party planner extraordinaire Mindy Weiss.

The Cooking With Paris star married Reum, 40, a venture capitalist she had known for more than 15 years, surrounded by more than 80,000 pink and white roses and peonies. 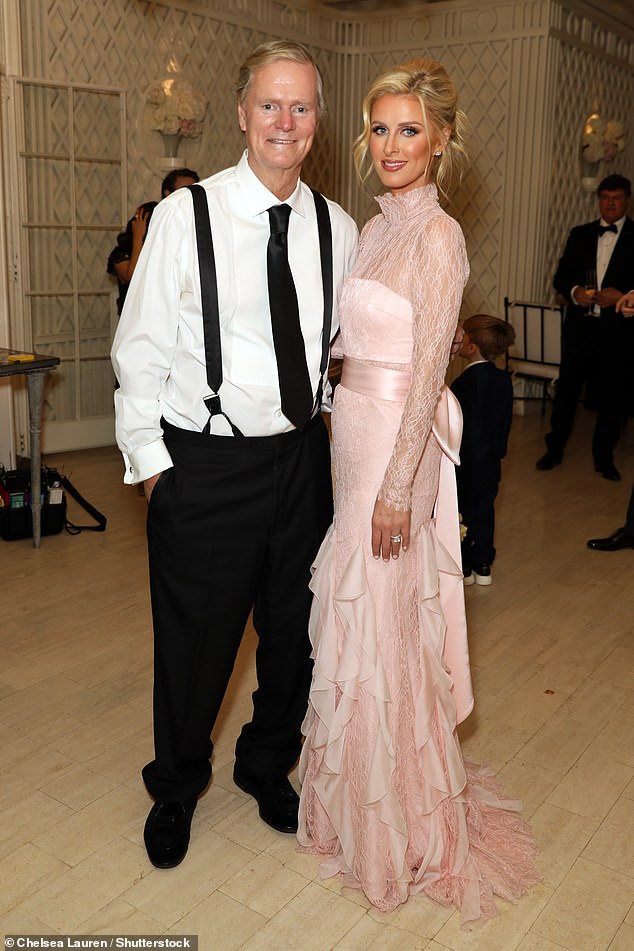 Father of the bride: Nicky posed for a snap with dad Rick Hilton at the event 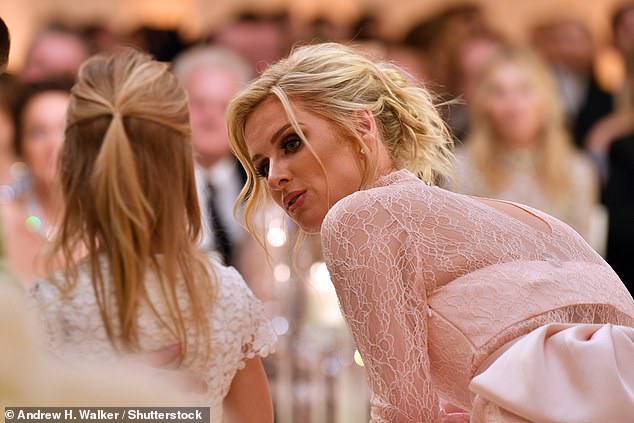 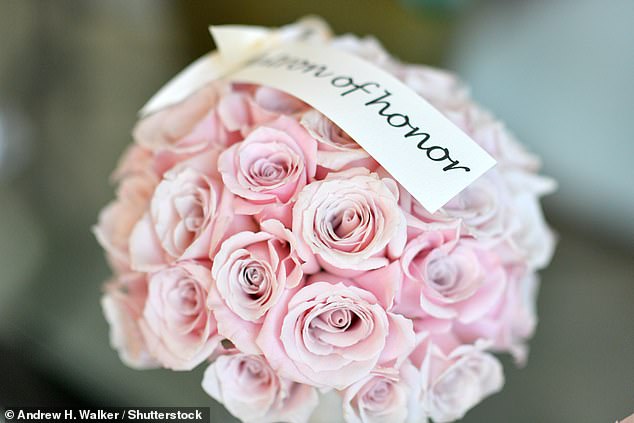 Custom: Mark’s Garden fashion all the bouquets as Paris carried white roses and her bridesmaids carried pink ones; Nicky’s bouquet with label ‘Matron of Honor’ pictured above 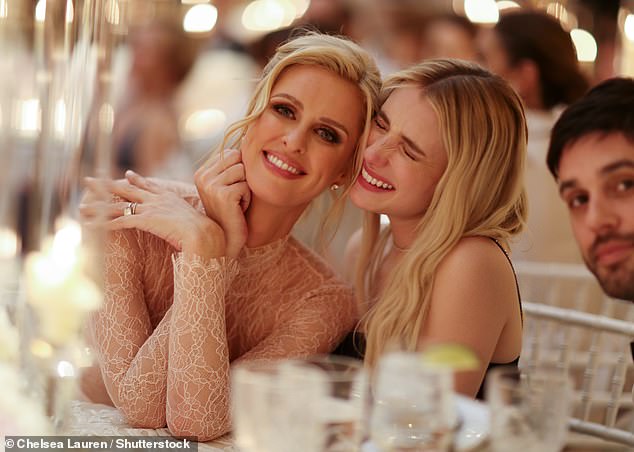 Best buds: At the event Nicky was seen budding up to Emma Roberts who was in attendance

The Hilton hotel heiress walked down the aisle to Kim Petras’ rendition of  I Can’t Help Falling In Love With You, and admitted to crying during the ceremony.

‘I think I started crying first,’ she wrote on her blog. ‘I had a glam refresh after because if I walked the aisle with all that mascara running down my face, it would’ve been beyond,’ she confessed.

The newlyweds shared their first dance to Bruno Mars’ Just the Way You Are, and the night featured additional performances by Demi Lovato who sang a rendition of Whitney Houston’s I Will Always Love You, while Petras performed Hilton’s hit Stars Are Blind. 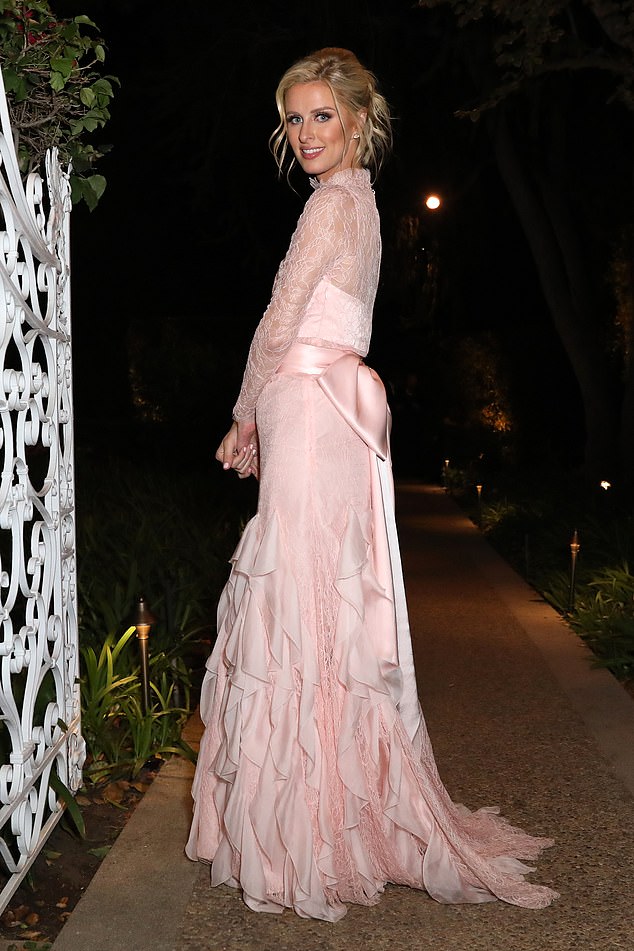 Solo shot: Nicky was a vision in the blush pink lace gown fashioned by Alice + Olivia which featured a slim silhouette and lightly ruffled bottom with a giant pink bow at the back 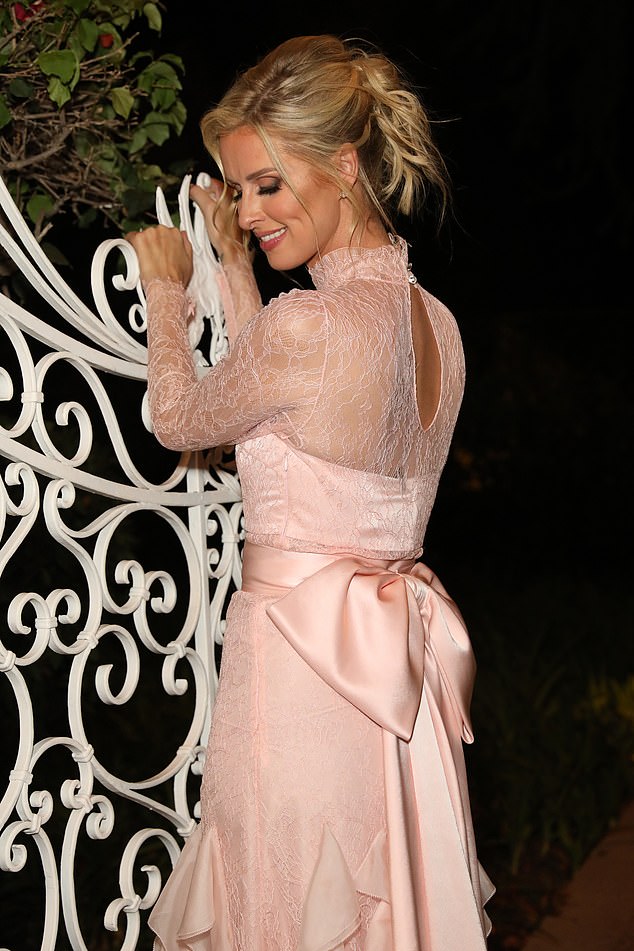 Back shot: During a nighttime photo shoot following during the reception, the socialite and fashion designer showed off her stunning dress 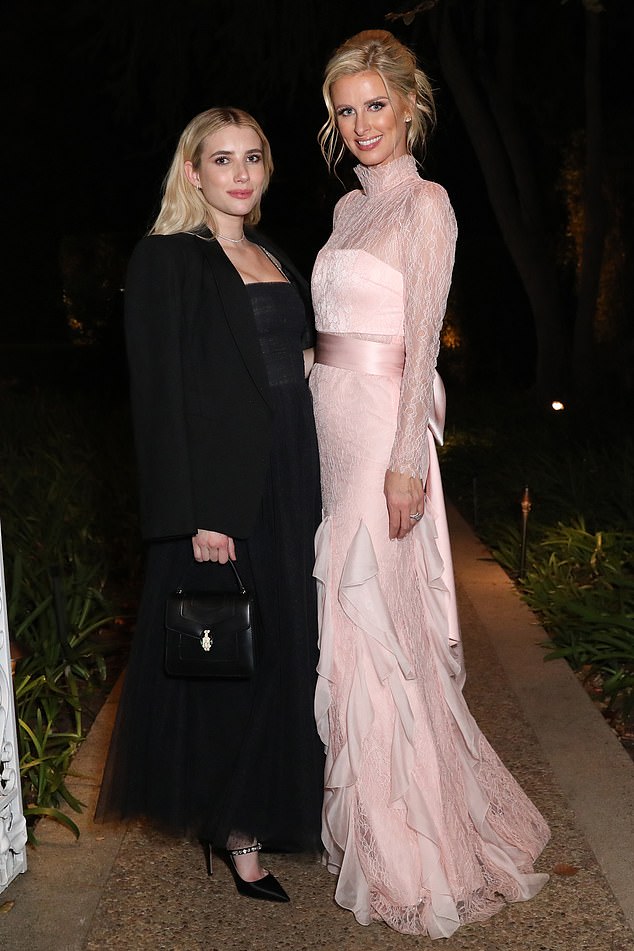 Visions: Roberts looked stunning for the black tie event as she wore a black tulle dress with spaghetti straps and glitzy silk pumps 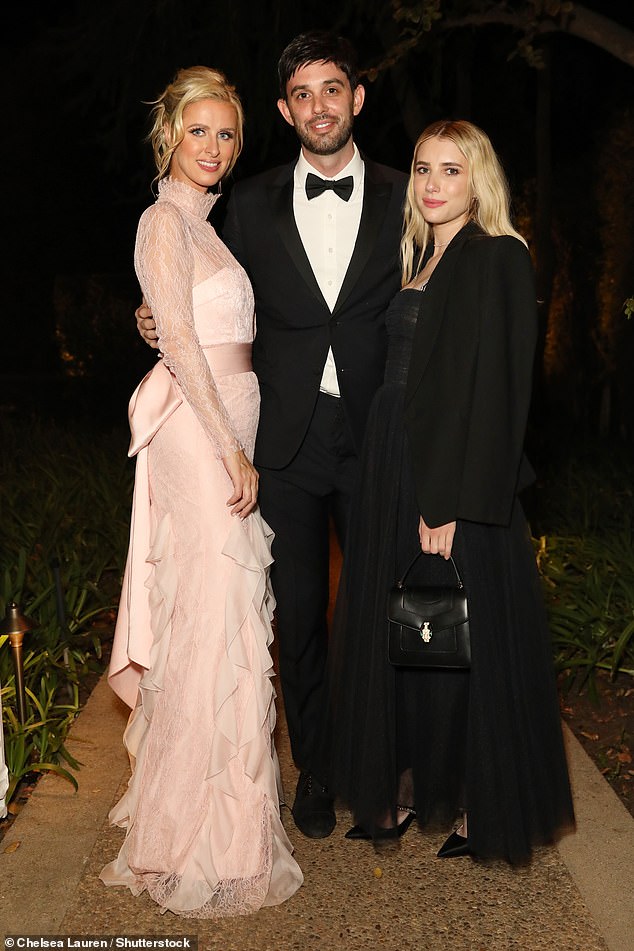 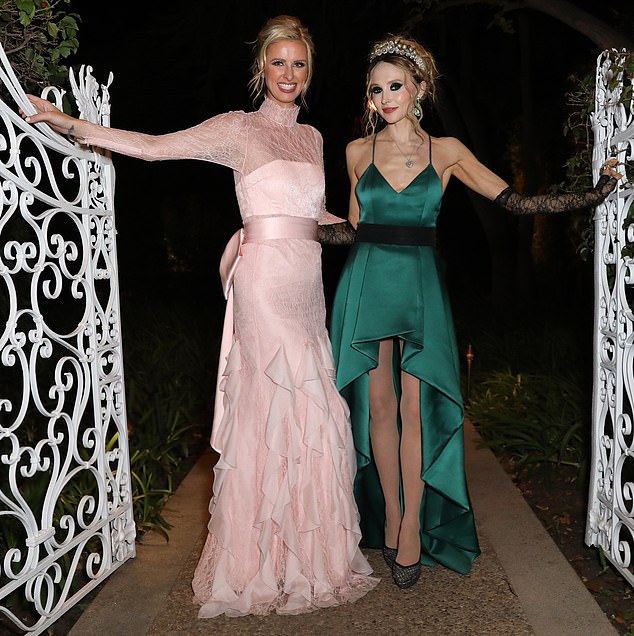 Photo op: She posed with Stacey Bendet while using one of the many gates at late grandfather Barron’s estate as a backdrop

She told Vogue: ‘As a little girl, I always told myself that I would get married at my grandfather’s former estate.

‘I imagined having my fairy-tale wedding here, and it’s amazing that it actually came true. This estate brings back so many memories, and it means so much to be here surrounded by family and connected to all my loved ones on this day.’

Nicky was seen posing for a photo with dad Rick Hilton, sharing a dance with author Derek Blasberg and having a ball with Emma Roberts and her date Cade Hudson — Britney Spears’ longtime CAA agent. 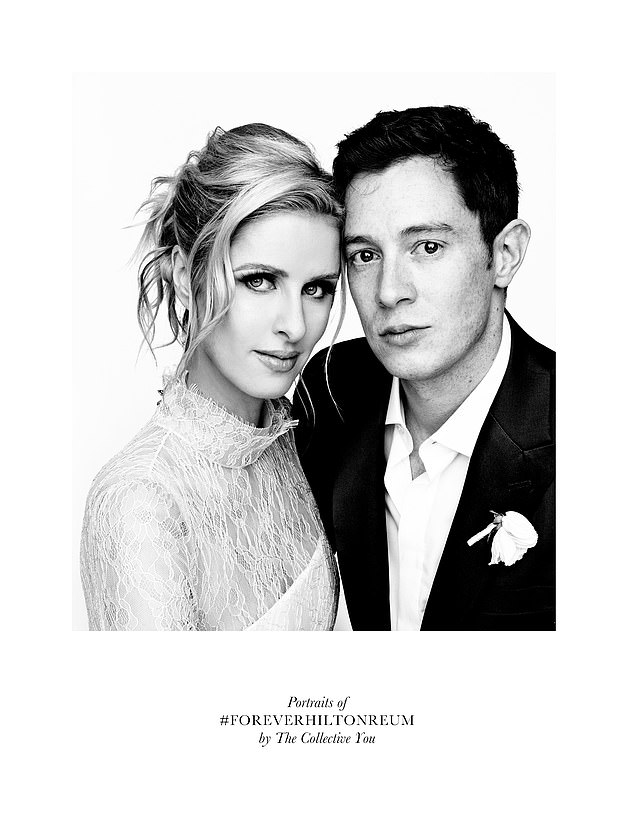