Olivia Wilde started her day with her fitness routine while wearing casual clothing and sunglasses.

Olivia Wilde, 37, made sure to stay active on the morning after her boyfriend Harry Styles, 27, celebrated his first Grammy win. The actress was photographed looking stylishly comfortable while going on a run in London, where she’s been staying with her two kids, Otis, 6, and Daisy, 4, as her ex Jason Sudeikis films the second season of Ted Lasso. She wore a tan jacket, black leggings, and white and blue Adidas sneakers during the outing as well as sunglasses as her long locks were up in a high ponytail.

The House M.D. star was holding her phone and had her earbuds in during the run. It’s not clear whether she was listening to music or talking on the phone, but she appeared relaxed as she went on her way without paying much attention to cameras. At one point, she also seemed to check the time while looking down at a watch on her wrist. 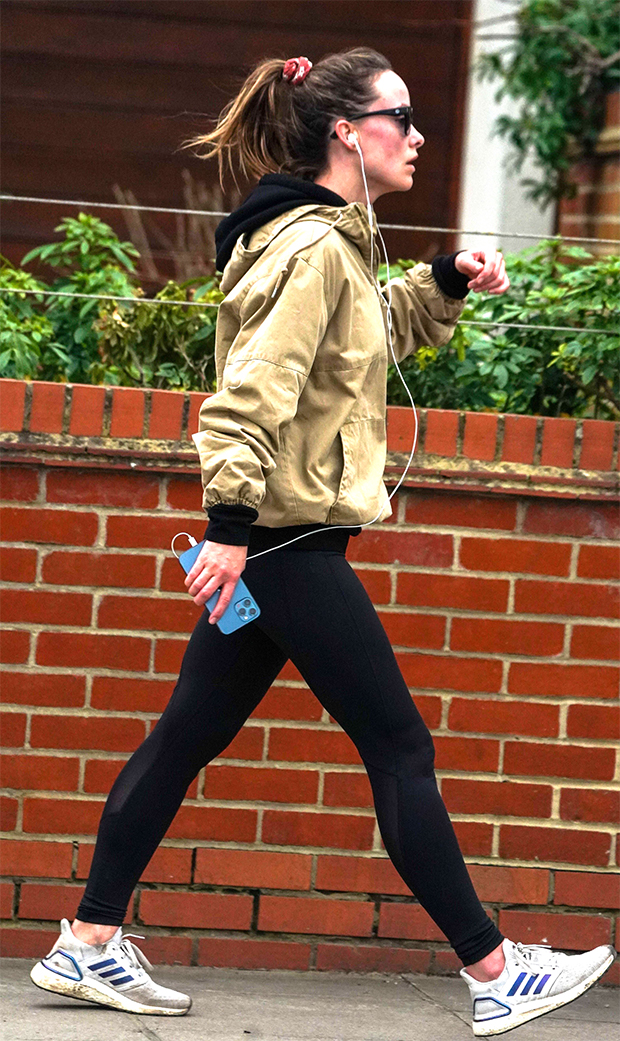 Olivia’s London run comes on the morning after her new beau Harry won his very first Grammy Award during the live ceremony in Los Angeles on Mar. 14. The singer’s song “Watermelon Sugar” won for Best Pop Solo Performance, proving he’s just as talented in his own music career as he was with his popular group One Direction. The British hunk also opened the show with an incredible performance of “Watermelon Sugar” that included incredible vocals and eye-catching moves in a black leather jacket with nothing underneath, matching black pants and a bright green feather boa.

Harry’s epic performance was no surprise but his win had many fans super excited. His ex-girlfriend Taylor Swift, 31, who was also nominated in the category for her song “Cardigan,” showed her support for him when she quickly stood up to clap after his name was announced as the winner. “This was the first song we wrote after my first album came out, during a day off in Nashville,” Harry said in his acceptance speech. “I feel very grateful to be here, thank you.”

Before Harry made headlines for winning his first Grammy, he got attention for holding hands with Olivia during their first public outing as a couple in Jan. A previous source told us that Olivia is “falling” for Harry, who just finished filming Don’t Worry, Darling, an upcoming film she directed.

“She is falling for him hard, but doesn’t want to move too fast and scare him off,” the source EXCLUSIVELY told HollywoodLife. “She’s been married before and had a near-decade relationship with Jason and has kids, so she is eager to see where this relationship goes with intentions of it being great but seeing how it all plays out.”