She’s had a sensational start to 2021, breaking records with her album Folklore and also celebrating the release of surprise record Evermore.

And Taylor Swift took some time away from writing on Monday as she enjoyed a relaxing winter stroll with her beau Joe Alwyn, 29, and his mother Elizabeth in London.

The singer, 31, and her actor boyfriend looked as loved-up as ever as they held hands and donned face masks to stay safe amid the coronavirus pandemic during the walk. 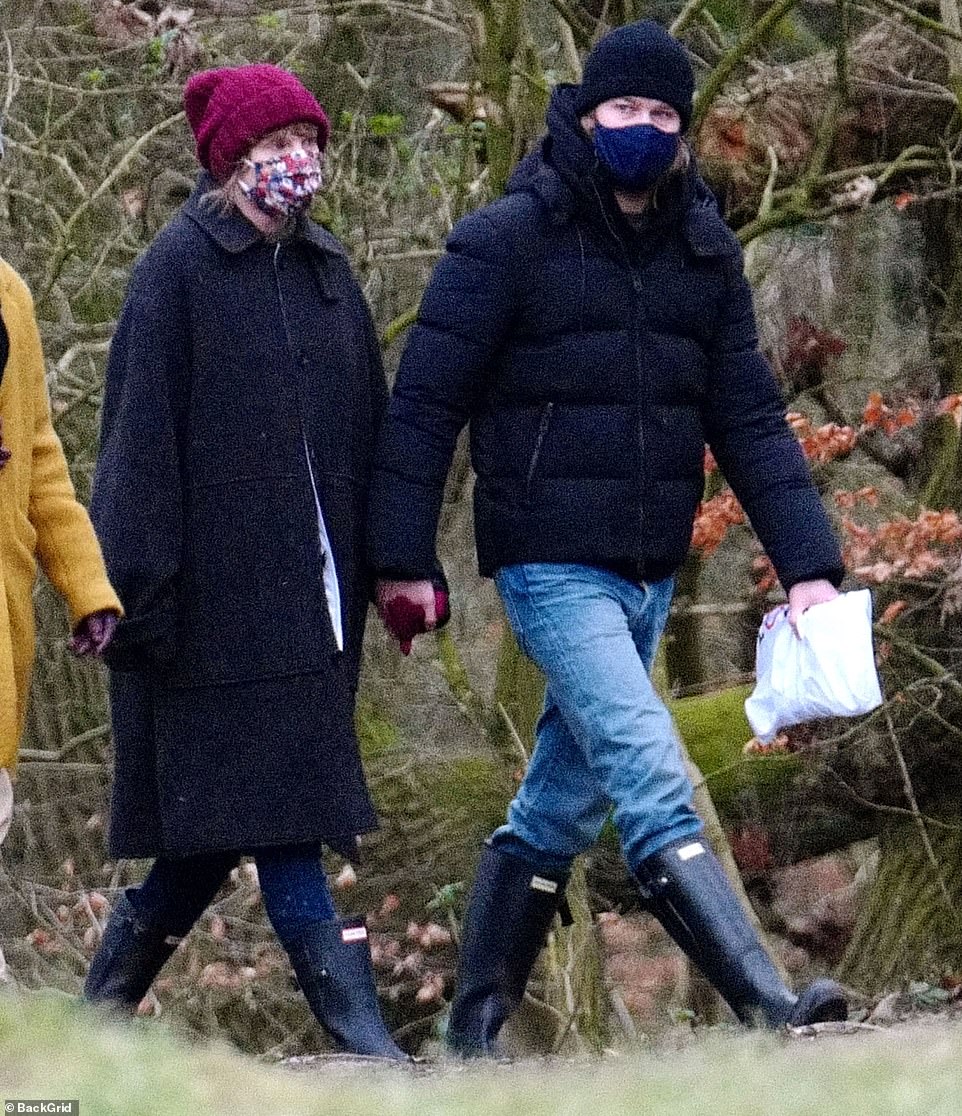 Winter stroll: Taylor Swift and Joe Alwyn looked as loved-up as ever as they held hands during a walk in London on Monday

Taylor wrapped up warm for the outing, wearing a long oversized black jacket and warm red hat as well as matching rouge gloves which complemented her colourful face mask.

The singer and Joe also coordinated, with them both rocking black wellies and opting to keep things casual in jeans as they stepped out for some fresh air during the nationwide lockdown.

Joe was also bundled up for the chilly weather in a black padded jacket and appeared to be holding onto a small white parcel as he walked alongside his love and mother.

The happy couple, who have been dating since 2017, isolated together during the pandemic with them sharing a few glimpses into their time in lockdown to Instagram and even writing some music together. 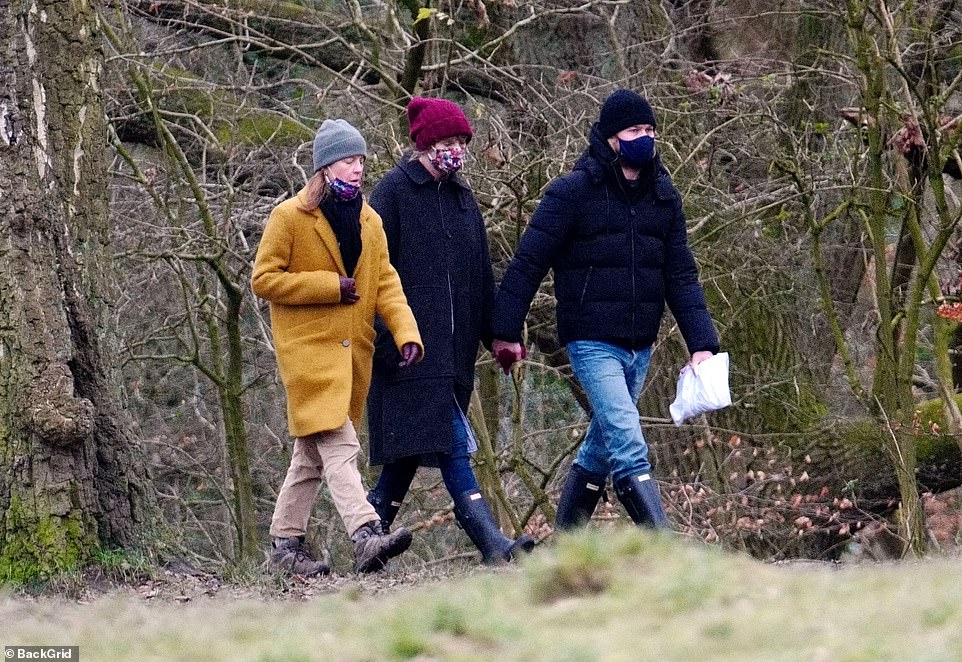 Getting some air: The singer, 31, and actor, 29, wrapped up warm in black jackets and jeans for the trip out with his mother

Under current UK lockdown rules, people can exercise with one other person or with their household or support bubble.

Taylor recently gave a rare insight into their relationship as she revealed she has bonded with Joe through their mutual love of sad songs.

The loved up couple collaborated on several tracks on her new Evermore’ album, and the star has detailed their process, including their similar ‘musical tastes’.

Speaking to Zane Lowe about the actor on Apple Music, she said: ‘Joe and I really love sad songs. We’ve always bonded over music…

‘We write the saddest [songs]. We just really love sad songs. What can I say? It was a surprise that we started writing together. 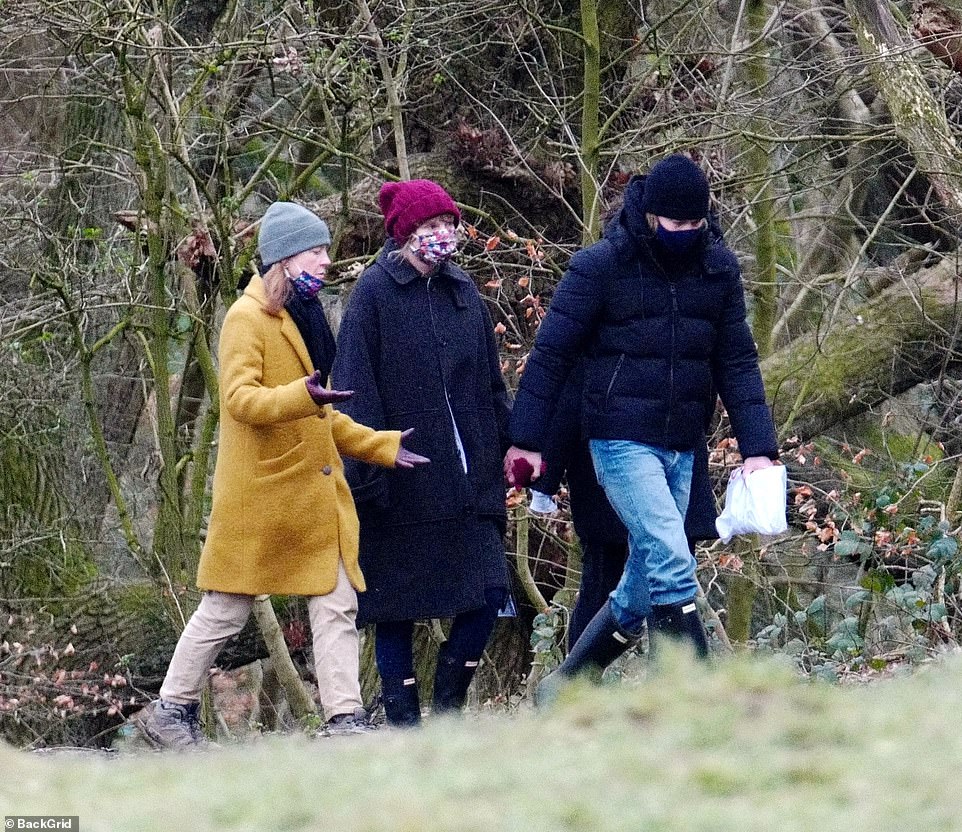 Chatting away: The trio appeared to be deep in conversation as they walked and talked, with Elizabeth putting on an animated display 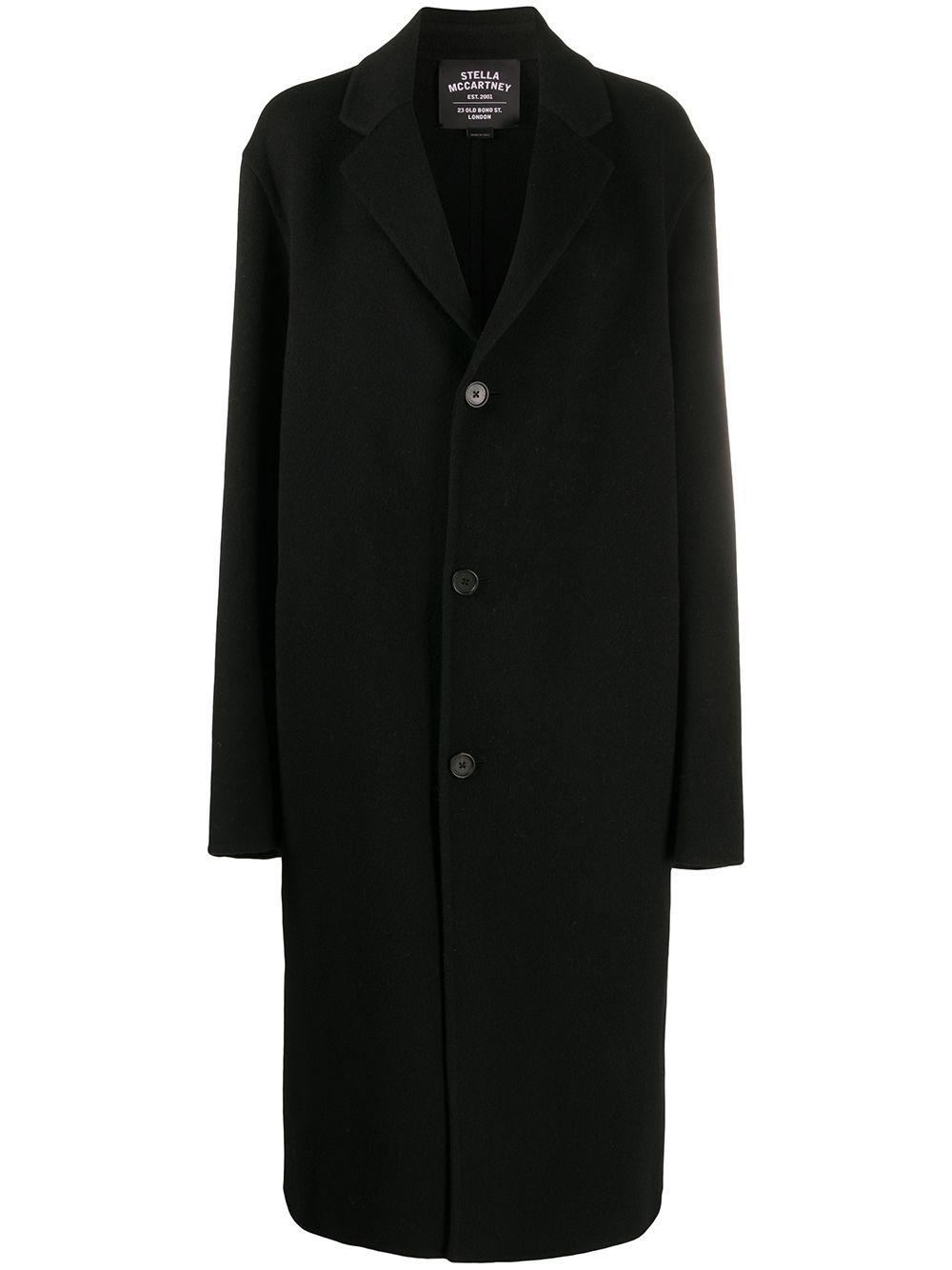 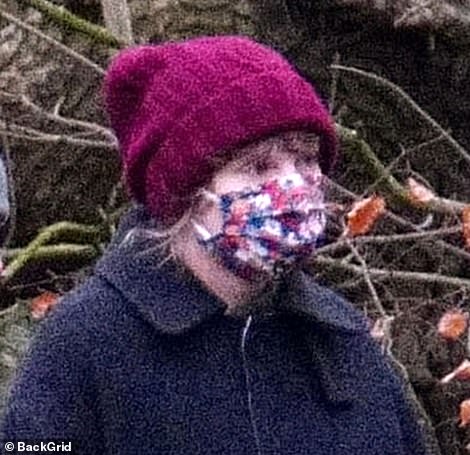 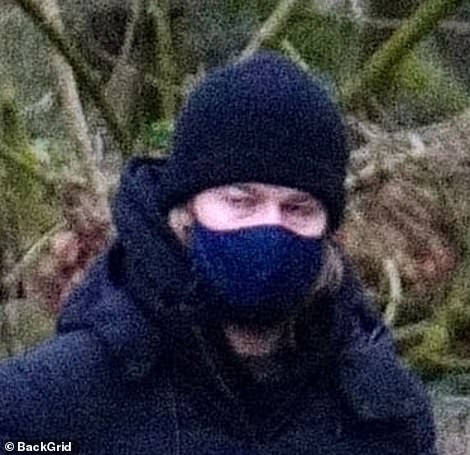 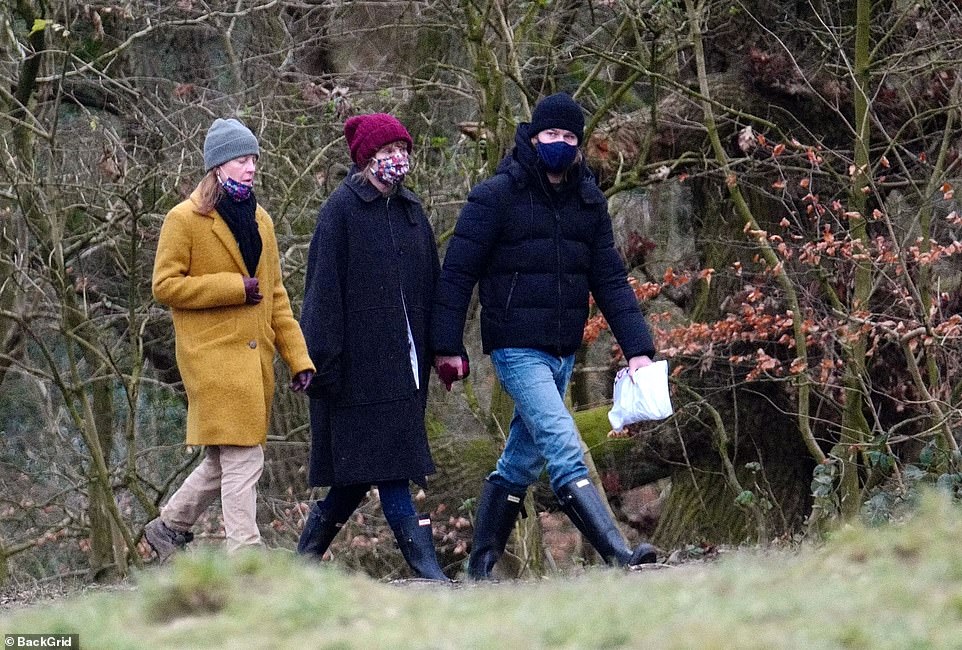 Matching: The happy couple coordinated their ensembles in blue jeans and tall wellies

‘But in a way, it wasn’t because we have always bonded over music and had the same musical tastes. He’s always the person who’s showing me songs by artists and then they become my favourite songs.’

Joe was credited as William Bowery on the record, and helped pen ‘Champagne Problems’, ‘Coney Island’ and ‘Evermore’ on her newest release, while they had previously teamed up on ‘Exile’ and ‘Betty’ for its predecessor ‘Folklore’.

Opening up on their process – and the song ‘Exile’ in particular – she added: ‘He’s always just playing instruments and he doesn’t do it in a strategic… ”I’m writing a song right now’ thing. He’s always done that.

‘But do I think we would have taken the step of, ‘Hey, let’s see if there’s a song in here. Let’s write a song together?’ 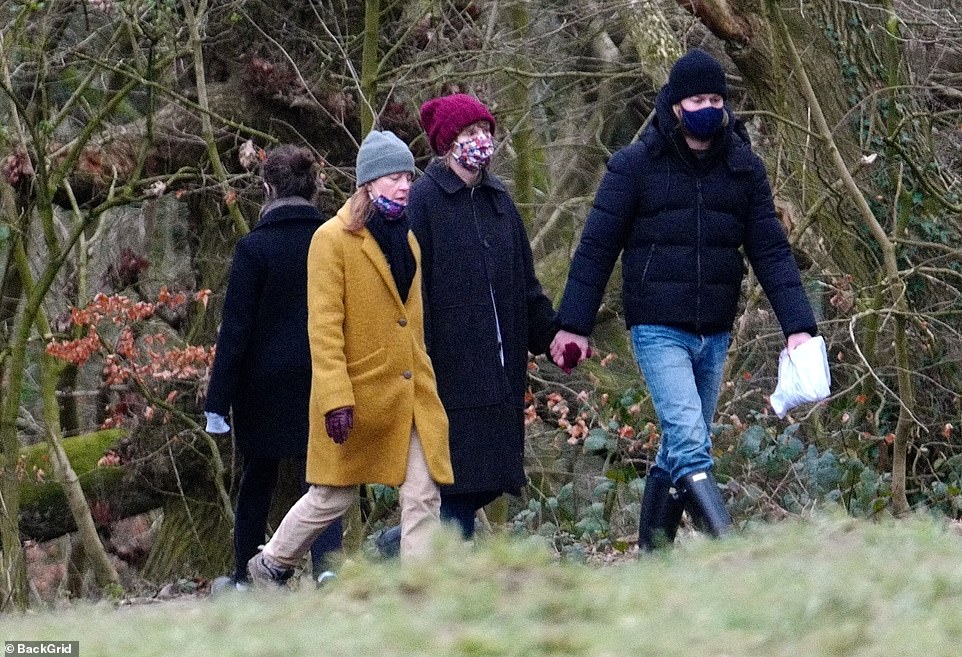 Loved-up: They held hands during the stroll, with Elizabeth walking alongside Taylor 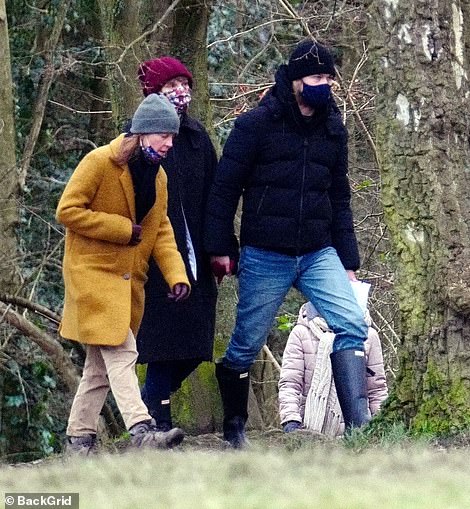 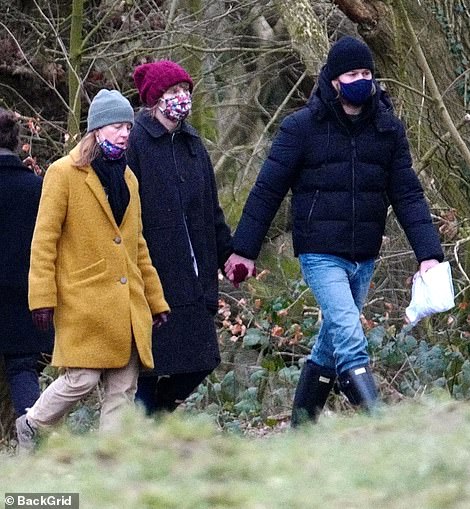 Running errands? Joe appeared to be holding a small white parcel in one hand 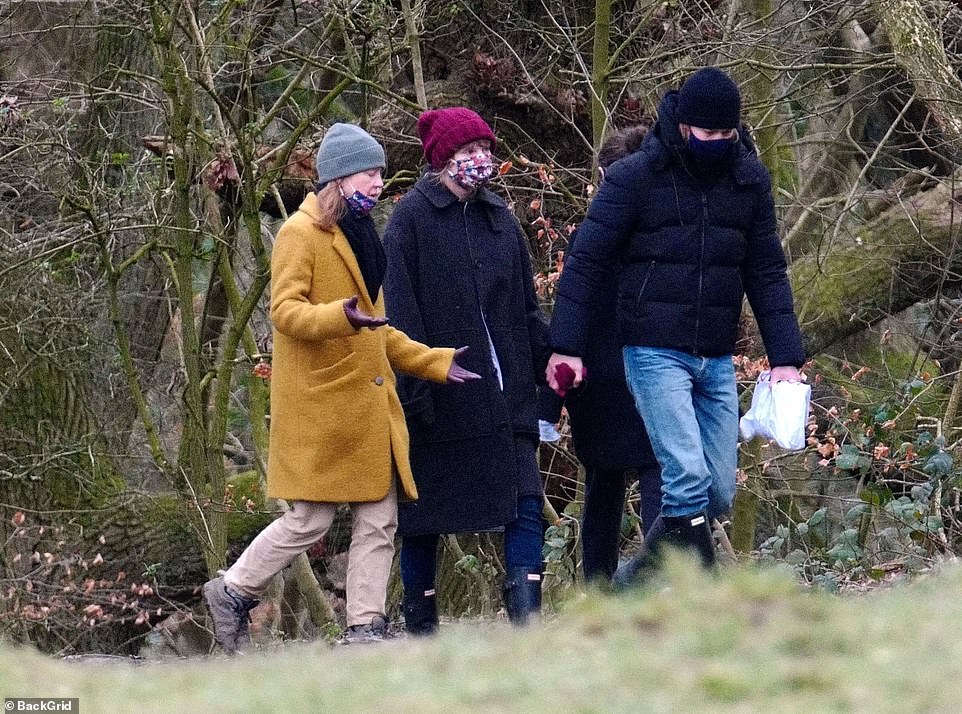 Animated: Psychotherapist Elizabeth appeared to be telling a lively story to her son and his girlfriend

‘If we hadn’t been in lockdown, I don’t think that would have happened, but I’m so glad that it did. We’re so proud of that one.’

The stroll also comes after Taylor broke another record recently, as her album Folklore became her fifth top-selling album of the year in the United States, making her the first artist to reach such an accomplishment.

The star’s eighth studio album sold 1.276million from its release in late July, through the end of the year, also making it the only album to sell at least a million copies, according to MRC Data. 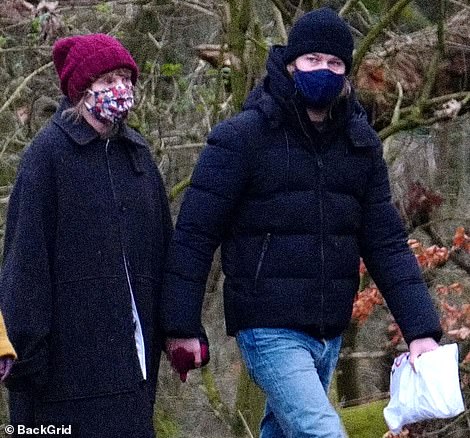 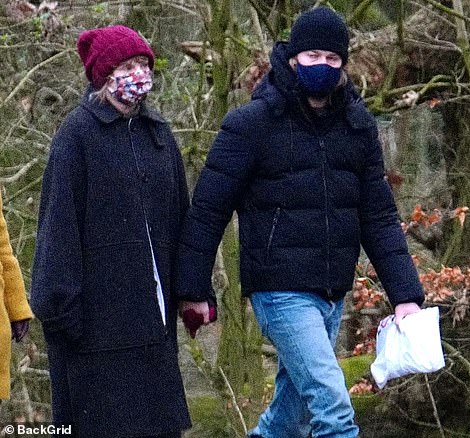 Working together: Taylor and Joe have spent much of the coronavirus pandemic isolating together and even wrote a few of the songs on her latest releases, Folklore and Evermore 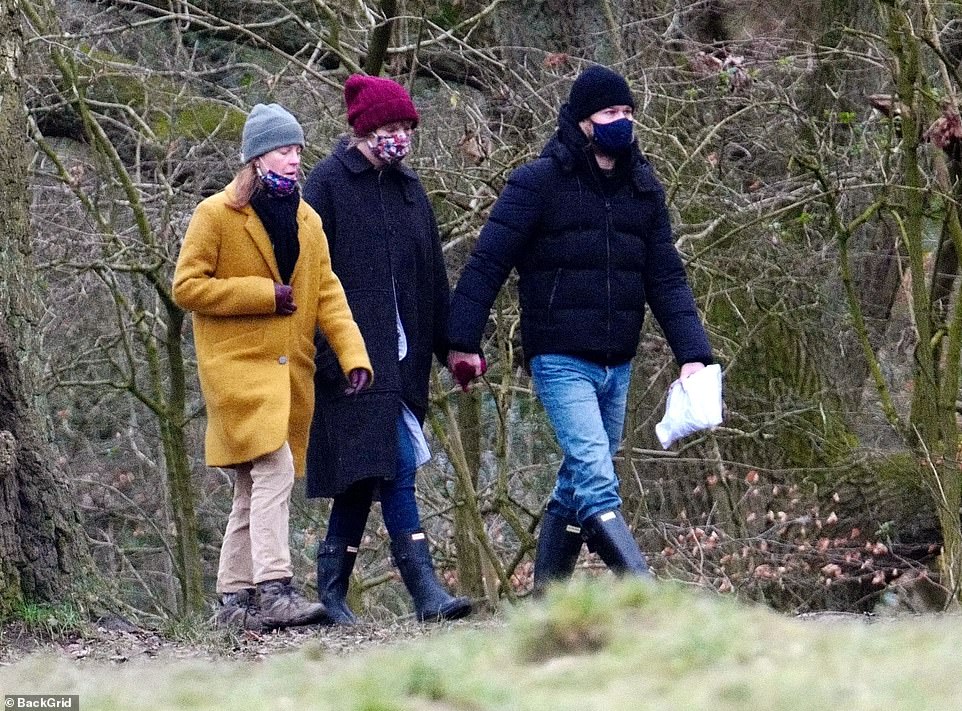 Layers: Taylor seemed to be wearing a long shirt under her warm jacket which peaked out from the slightly buttoned front 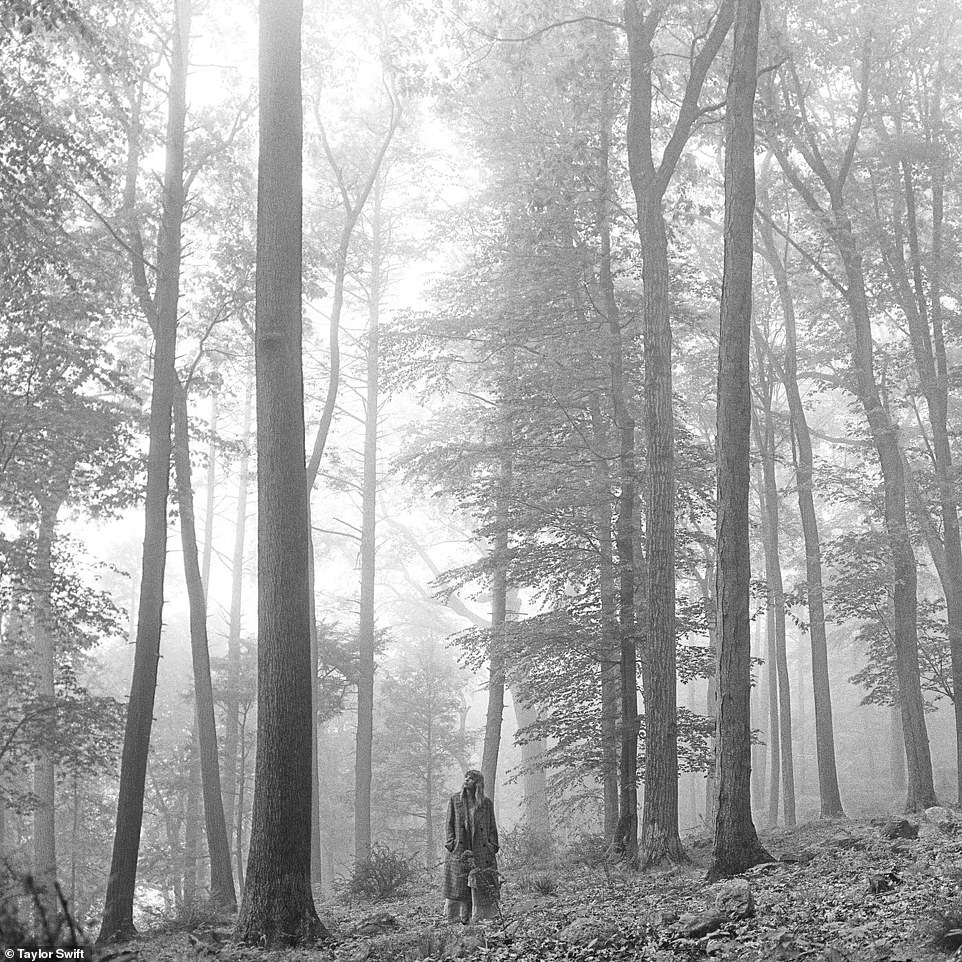 Making millions: The 31-year-old’s eighth studio album, Folklore, sold 1.276million from its release in late July, through the end of the year, also making it the only album to sell at least a million copies

Folklore debuted atop the Billboard 200, and it spent eight weeks at No. 1, bringing her career total to 47 weeks, which topped Whitney Houston’s 1987 record as most weeks at No. 1 by a woman.

Taylor followed up Folklore’s surprise July release with another surprise album in Evermore, which she dropped last month. Evermore was the 10th top-selling album of the year, with 283K copies sold in the less than three weeks since it was released.

On Sunday, Evermore was back atop the Billboard 200 for the week ending January 7 after moving 56,000 album units domestically. The album hit the chart in the top spot for a pair of weeks and dropped to second when Playboi Carti landed at number one with Whole Lotta Red.

Further treating her fans, Taylor also dropped a deluxe version of the album this week, featuring two bonus tracks, Right Where You Left Me and It’s Time to Go. 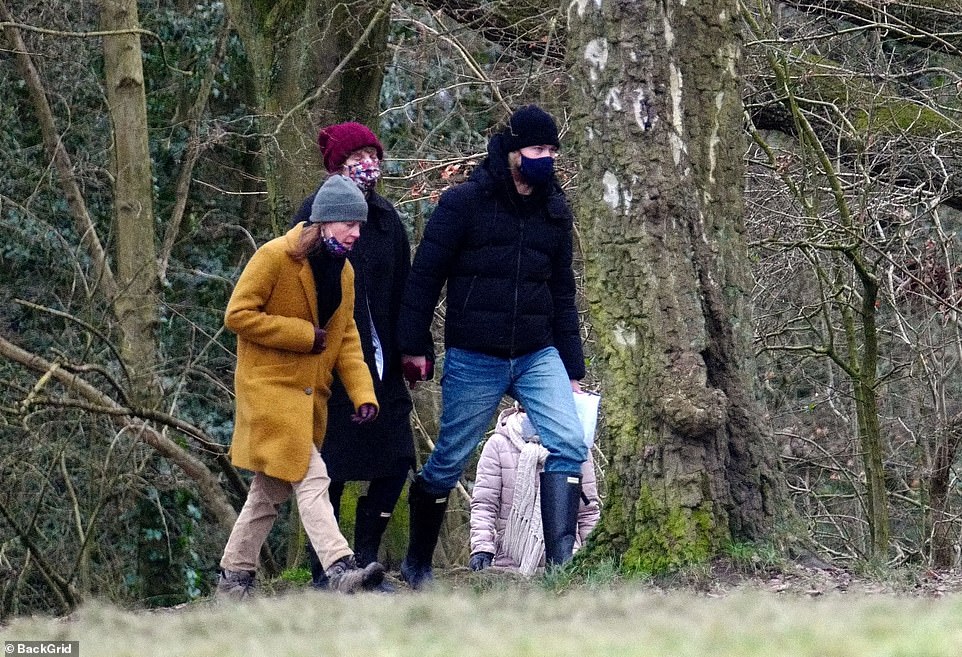 Busy: Taylor kicked of 2021 by breaking more US chart records and treating her fans to two new tracks