Rihanna was spotted stepping out on a shopping trip in New York City on Thursday afternoon.

The 33-year-old singer was seen spending time with a large group of her friends, a well as her boyfriend A$AP Rocky, as they made their way to Maria Tash and various other shops to celebrate her newfound status as a billionaire.

The Disturbia singer and the rapper, 32, were initially romantically connected in 2012 and recently resumed their romance after several years of separation. 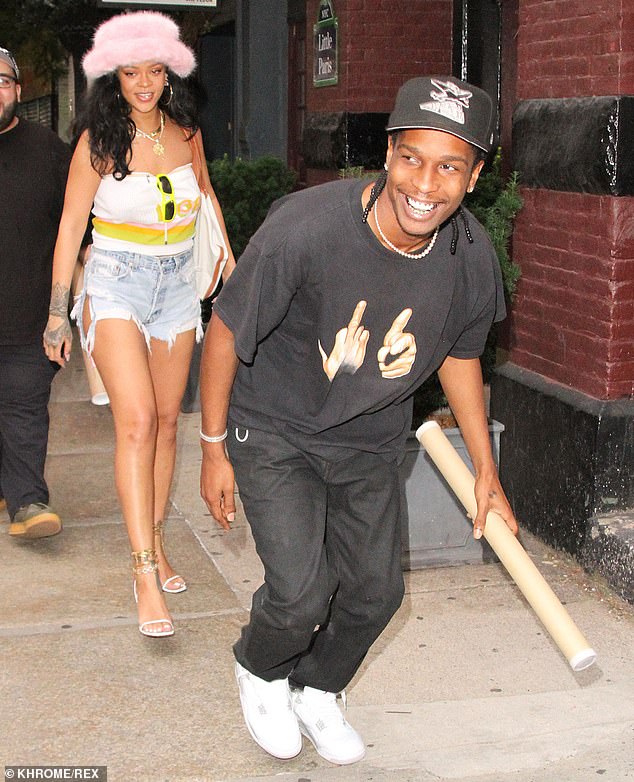 Better together: Rihanna was seen spending time with her boyfriend, A$AP Rocky and a group of friends during an outing in New York City on Thursday 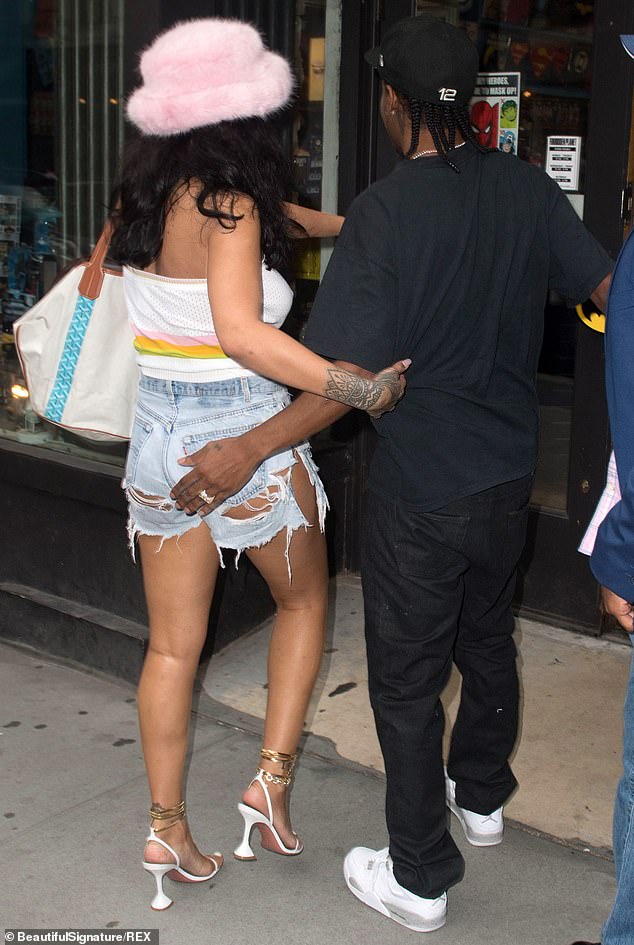 Head over heels: During an interview with GQ, A$AP Rocky noted that Rihanna was ‘the love of my life’ and ‘the One’

Rihanna sported a graphic-printed Dior tube top while enjoying her time with her pals.

The hitmaker tucked her shirt into a heavily distressed pair of light blue denim shorts that exposed her beautifully toned legs.

The Grammy-winning artist also wore a stylish pair of high-heeled shoes that matched her top during the outing.

A fuzzy pink hat covered up the top of her beautiful black hair, much of which fell onto her shoulders and backside.

Looking good! The hitmaker sported a graphic-printed Dior top during the excursion. The singer tucked her top into a pair of heavily distressed denim shorts 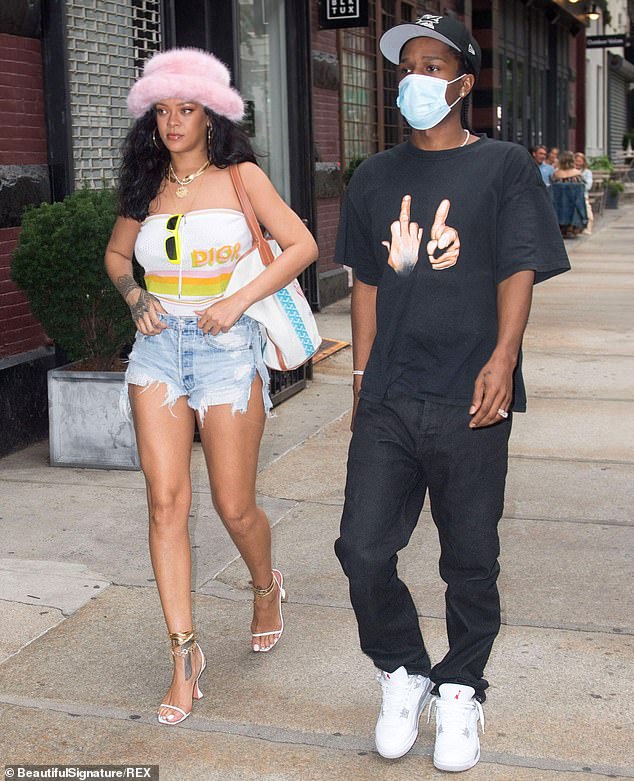 Stepping in style: The Grammy-winning songwriter also rocked a pair of high-heeled shoes as she spent time with her boyfriend

She accessorized with several articles of jewelry, including numerous necklaces and rings, as well as a pair of gold hoop earrings.

Rihanna notably kept a neon green pair of sunglasses hanging from the top of her shirt.

She also carried a sizable bag that was slung over her left shoulder as she spent time with her friends. 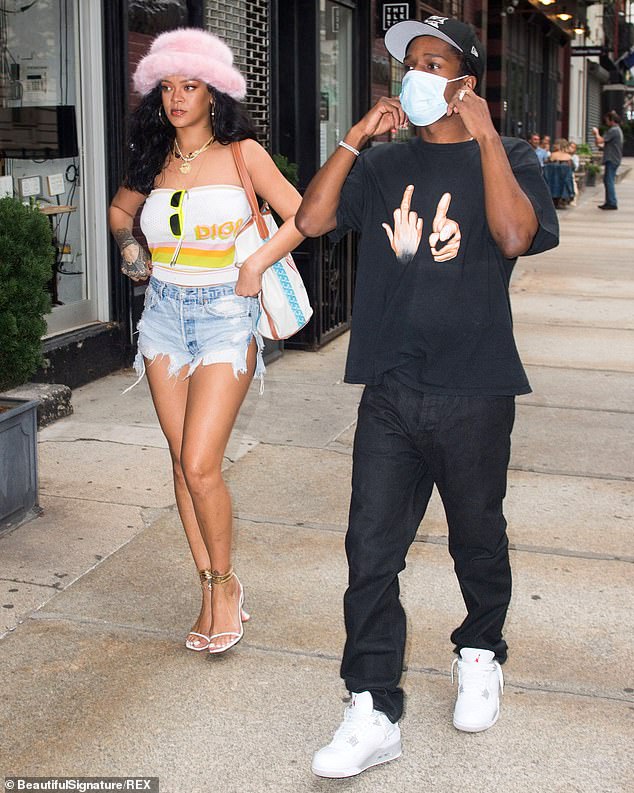 Shining like a diamond: Rihanna wore numerous sparking articles of jewelry during the trip

Headwear: The singer notably sported a fuzzy pink hat as she made her way around the Big Apple’s streets. She also kept a sizable bag slung over her left shoulder

A$AP Rocky kept it much more toned-down during the excursion, as he wore a graphic-printed black t-shirt and a matching pair of pants.

The hitmaker also sported a baseball cap and contrasted the dominant color of his outfit with a pair of white Jordans.

He accessorized with a single bracelet and a shining necklace that added a bit of shine to his outfit.

The performer also donned a blue facial covering to keep himself protected from COVID-19 while he spent time in public. 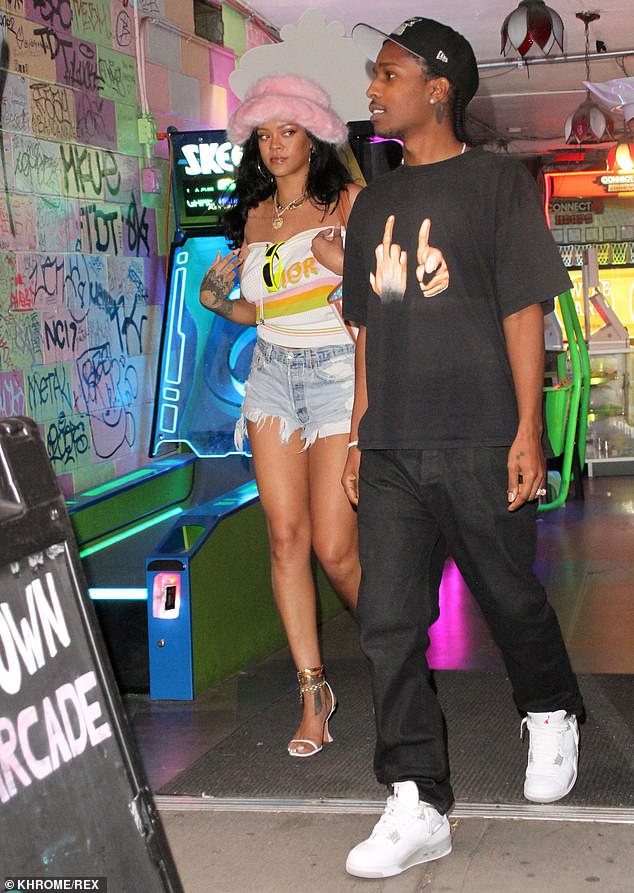 Taking it easy: A$AP Rocky sported a graphic-printed t-shirt and matching pants as he spent time with his girlfriend 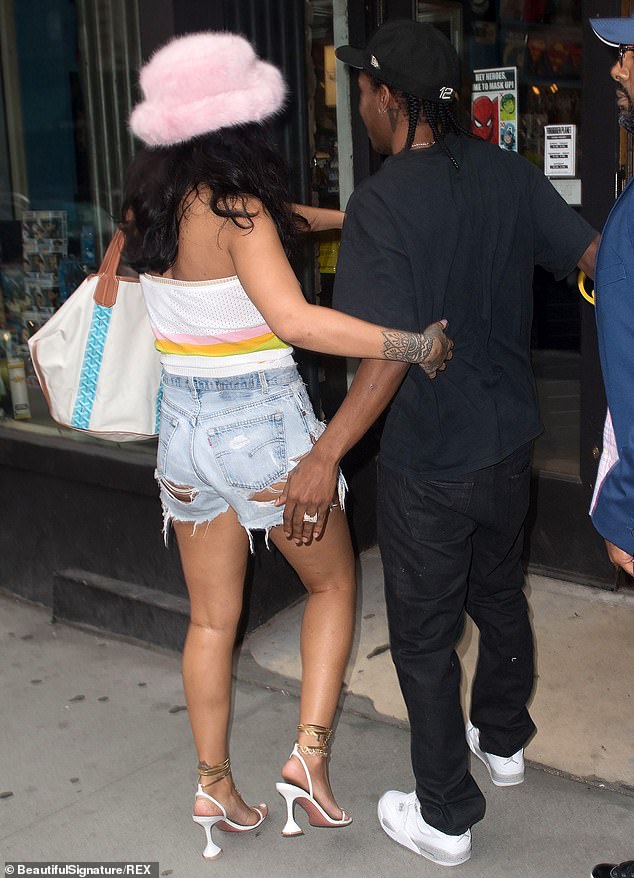 Lovebirds: At one point, the two were seen keeping their arms around each other as they prepared to enter a store

At one point, the loved-up couple was seen keeping their arms around each other as they prepared to enter a store.

Despite their star status, Rihanna and A$AP Rocky appeared to have some trouble snagging a seat inside 17 Wo Hop restaurant.

As the couple made their way towards the entrance, the restaurant’s owner quickly proceeded to tell them the dining are was ‘full.’ 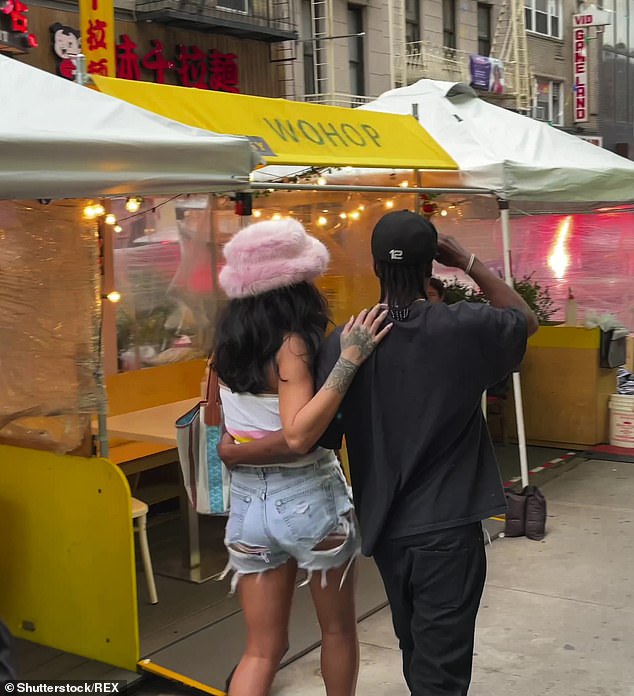 Sweet: At one point, the loved-up couple was seen keeping their arms around each other as they prepared to enter a store 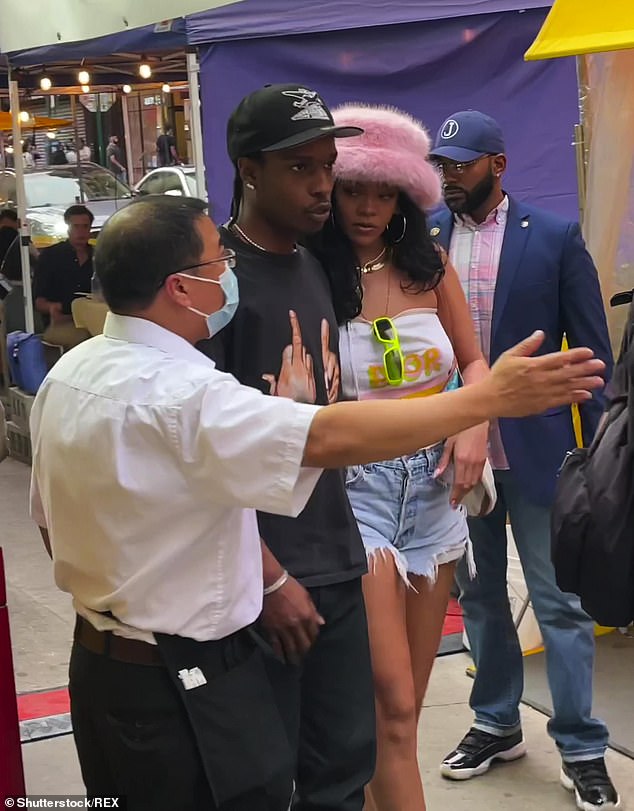 Uh oh: Despite their star status, Rihanna and A$AP Rocky appeared to have some trouble snagging a seat inside 17 Wo Hop restaurant 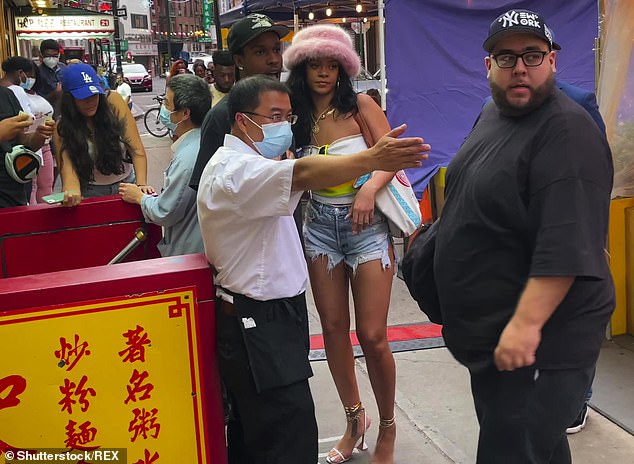 Full: As the couple made their way towards the entrance, the restaurant’s owner quickly proceeded to tell them the dining are was ‘full’

He then instructed the loved-up musicians to head ‘downstairs’ if they were still interested in sitting down and eating at the beloved establishment.

Rihanna sweetly listened to the owner’s instructions with her boyfriend by her side.

Rihanna and A$AP Rocky were first romantically connected in 2012 after they put on a very sultry performance at that year’s MTV Video Music Awards. 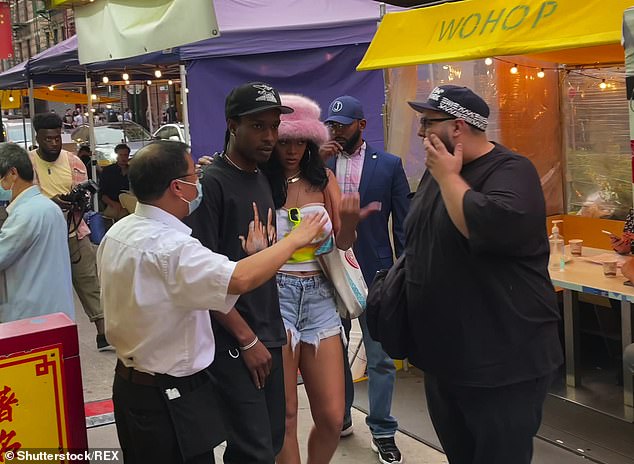 Right this way: He then instructed the loved-up musicians to head ‘downstairs’ if they were still interested in sitting down and eating at the beloved establishment 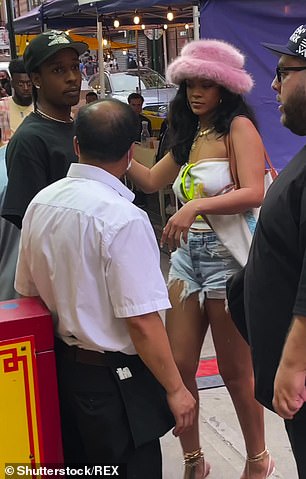 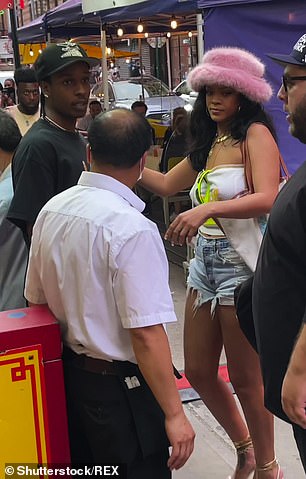 Listening: Rihanna sweetly listened to the owner’s instructions with her boyfriend by her side 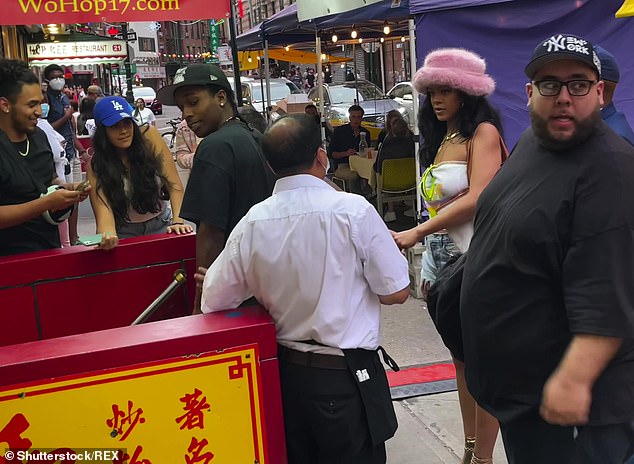 Next stop: Whether or not the pair decided to dine at the restaurant is unknown

He went on to serve as an opener for a portion of her 2013 Diamonds World Tour, and the two were spotted together on several occasions during the time period.

However, neither of the musicians ever confirmed that anything solid existed between them.

The Only Girl (In The World) singer later began a relationship with Drake, with whom she collaborated on the 2013 track What’s My Name? 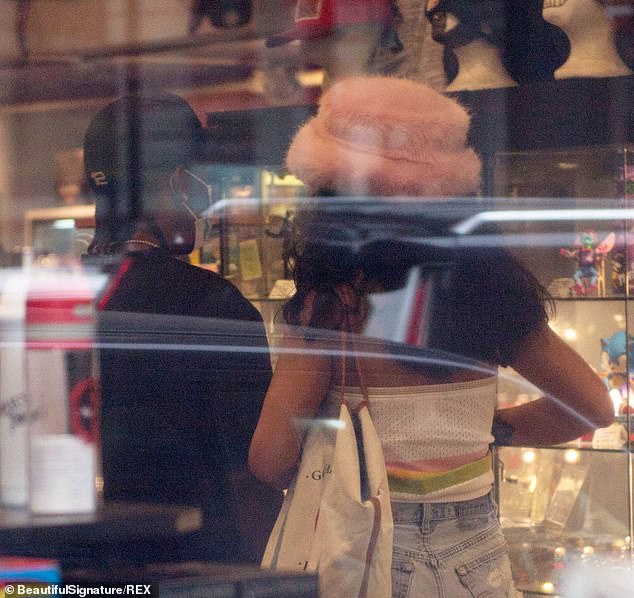 Starting off strong: Rihanna and her boyfriend first sparked relationship rumors in 2012 when they put on a very sultry performance at that year’s MTV Video Music Awards

Working together: A$AP Rocky served as an opener during the hitmaker’s Diamonds World Tour in 2013. Neither the singer nor the rapper confirmed that there was anything solid between them at the time

In 2016, the 34-year-old rapper expressed his affection for Rihanna when presenting her with an award.

Although the two appeared to be going strong, they eventually separated for good in October of that year.

She later began dating business magnate Hassan Jameel the following year, and they remained together for an extended period of time. 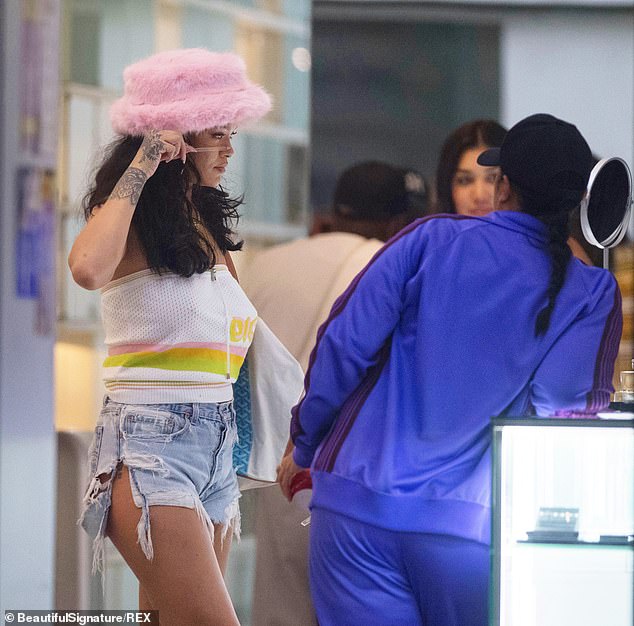 Moving on: Rihanna later started a relationship with Drake, with whom she previously collaborated

Letting everyone know: The rapper expressed his devotion to the hitmaker when he presented her with an award in 2016. Although the two appeared to be going strong, they broke up that October

The hitmaker later revealed that she and the billionaire had admitted that they loved each other in 2019.

However, the former couple went their separate ways that same year.

That same year, Rihanna and A$AP Rocky attended that year’s Fashion Awards, sparking rumors that they had rekindled their romance.

He went on to appear in several promotional videos for her cosmetics company, Fenty Skin, and they later made several shared appearances in various videos. 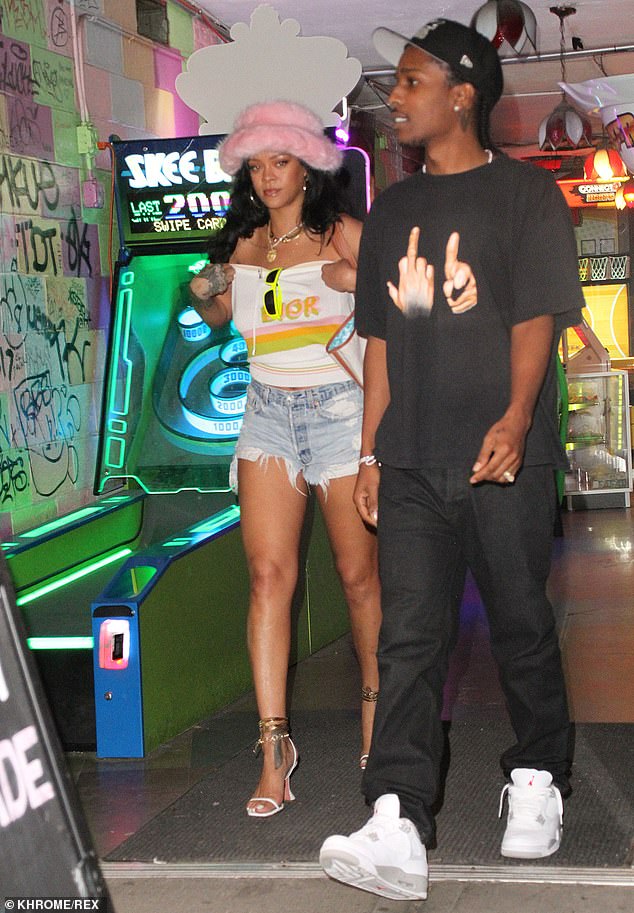 Another one: Rihanna went on to begin a relationship with business magnate Hassan Jameel

Devoted: The songwriter admitted that she and the businessman loved each other in 2019. Although the two appeared to be heavily invested in their relationship, they split up that same year

In November of last year, several sources reported that the two had officially entered into a relationship, and they were seen locking lips during a vacation to Barbados that occurred the following month.

Earlier this year, A$AP Rocky sat down for an interview with GQ where he described Rihanna as ‘The love of my life’ and ‘my lady.’

The rapper also expressed that the hitmaker was a very special person to him and was like no one he had previously met. 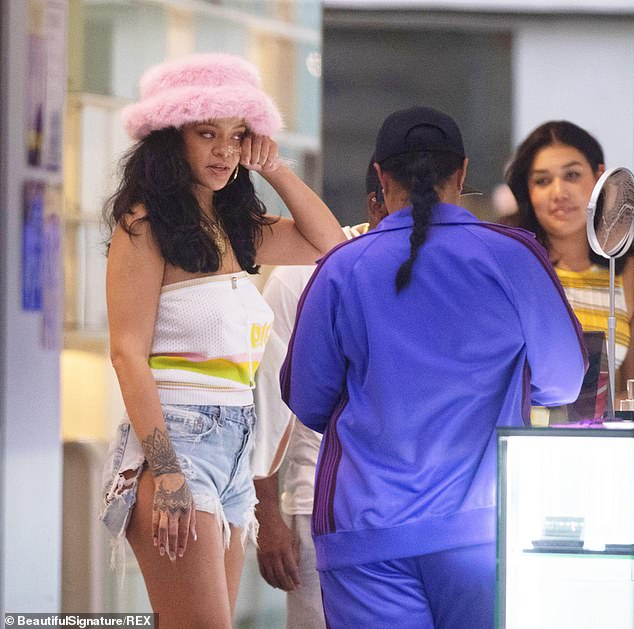 Recent development: Last November, it was revealed that the hitmaker and A$AP Rocky had been spending a significant amount of time together 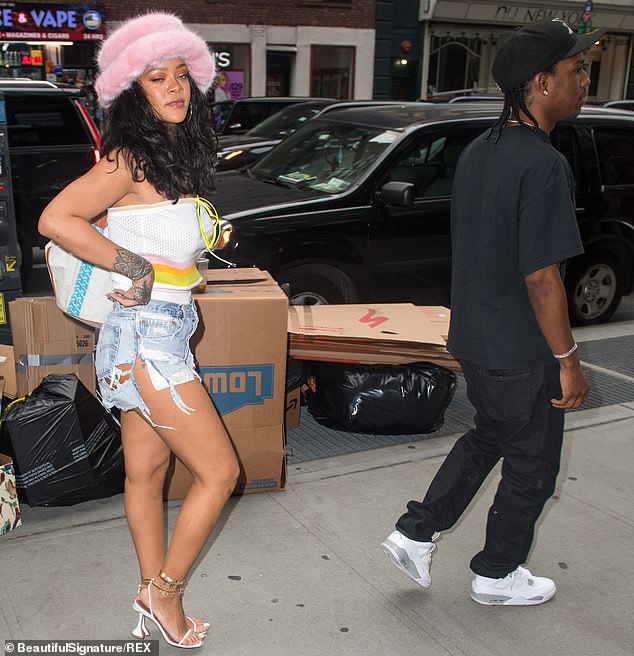 Sealed with a kiss: The reports about the pair’s relationship was confirmed when they were seen locking lips in Barbados that December

He noted that his life was ‘So much better…She amounts to probably, like, a million of the other ones.’

The Grammy-nominated hitmaker also told the media outlet that he felt a deep connection with Rihanna, stating: ‘She’s the One.’

A$AP Rocky concluded by noting that their relationship was strong because they respected each other as artists.

‘I think it’s important to have somebody that you can bounce those creative juices and ideas off of,’ she said.