Shia LaBeouf looked stoic while heading to the airport amid reports his on/off partner Mia Goth is pregnant.

The Even Stevens star, 35, was spotted saying goodbye to the apparently expecting actress, 27, outside of their Los Angeles home on Sunday.

The method actor appeared to be prepping for a role or perhaps sending a cryptic message, seen clad in brown monk robes tied together with rope while rosary beads dangled from his pocket.

Monk-y business: Shia LaBeouf wore monk’s attire while heading to the airport on Sunday, amid reports his wife Mia Goth is pregnant 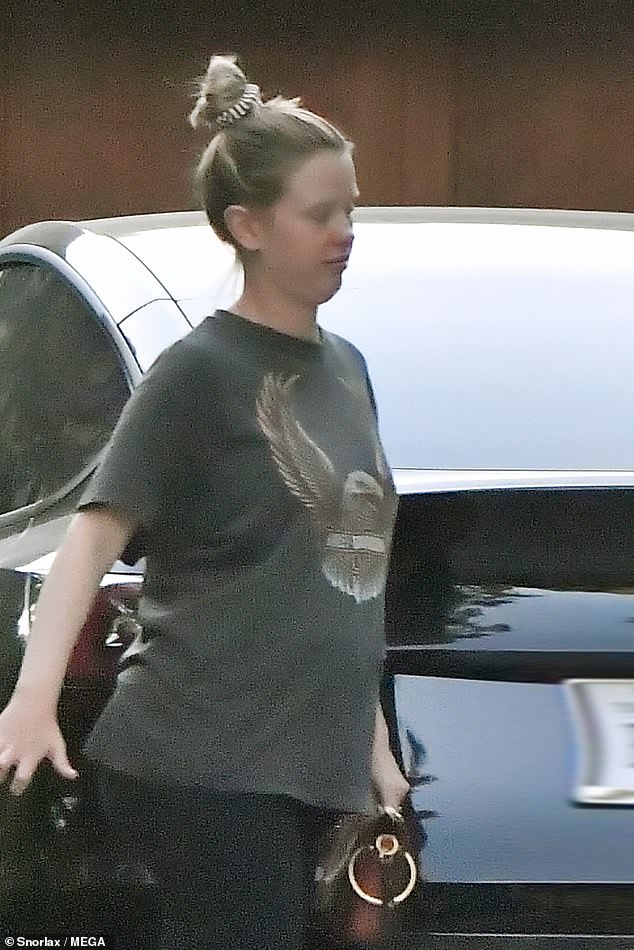 Baby on board? Goth appeared to be showing a bit of a bump

Completing his religious look, he added a skullcap and Birkenstock sandals while keeping a bristly beard on his chin.

Mia kept comfortable, covering up what appeared to be a baby bump with a baggy Harley Davidson tee shirt as she sent Shia off.

Later on, the Honey Boy star was seen at the airport with a VIP escort, who donned a sharp grey suit.

Yesterday Mia and Shia made headlines after they were spotted enjoying an afternoon at Chuck E. Cheese, where TMZ reported Goth’s bump was on full display. 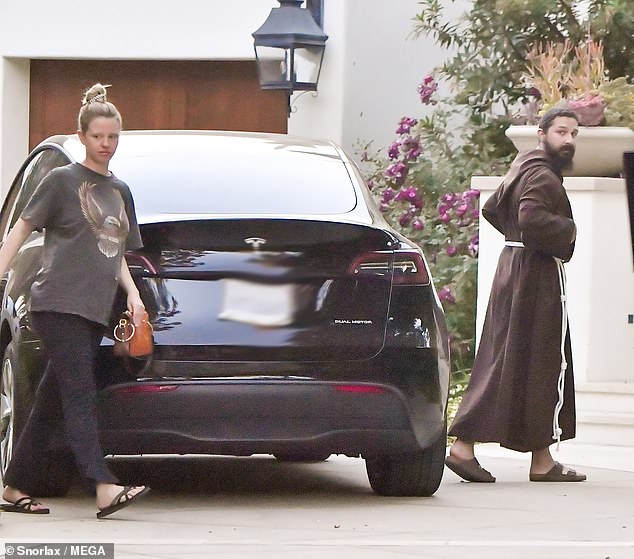 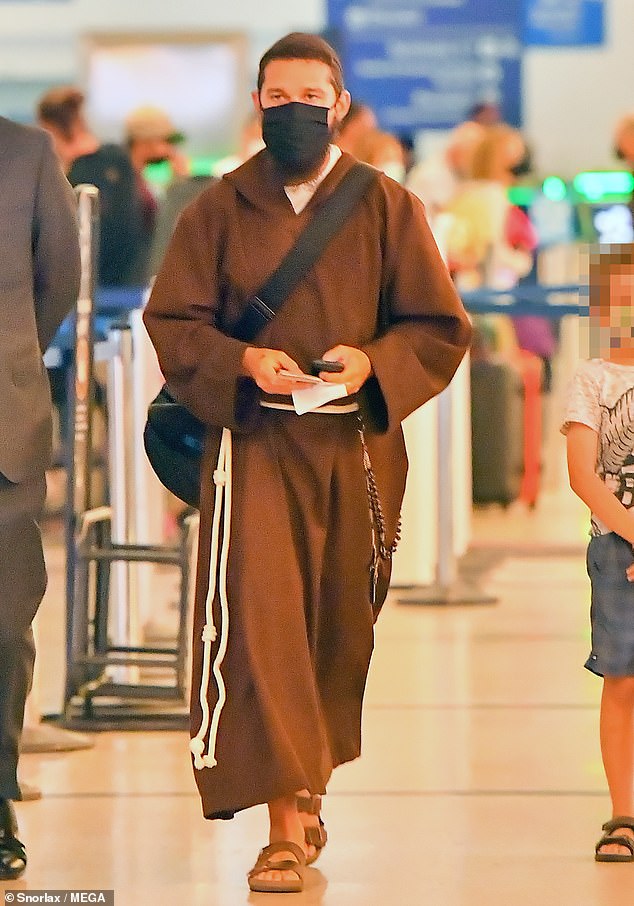 In character? The method actor appeared to be prepping for a role or perhaps sending a cryptic message with his look

The outlet reported that Goth ‘seems about 4/5 months along.’

LaBeouf and Goth initially met while working on Lars Von Trier’s 2013 feature Nymphomaniac, in which she made her acting debut.

The two made headlines in 2016 after they appeared to have tied the knot in Las Vegas with the assistance of an Elvis impersonator.

The Clark County of Nevada later announced the pair never obtained a marriage certificate, making the union unofficial in the eyes of the law. 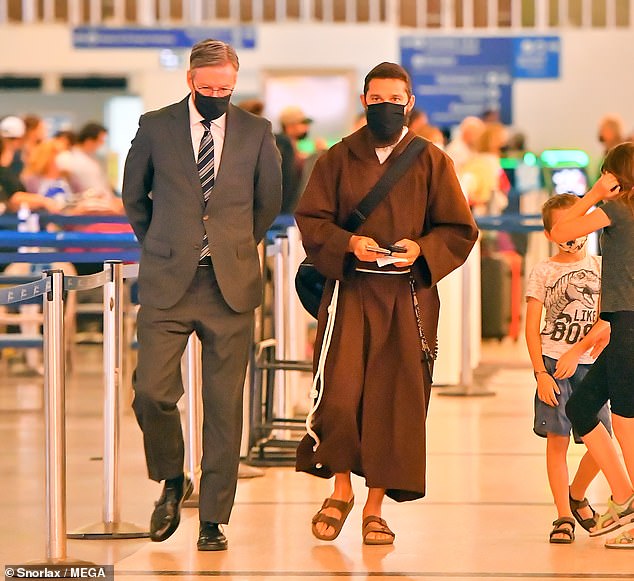 VIP: Later on, Shia was seen at the airport with a VIP escort

Outfitted: He was seen clad in brown monk robes while rosary beads dangled from his pocket

LaBeouf later appeared on The Ellen DeGeneres Show and expressed that he was, in fact, a married man.

When the series’ host asked the actor if the news about him was true and that he had tied the knot with Goth, he noted via People: ‘I did, yes.’

The pair remained together for two more years before they announced that they had separated and filed for a divorce.

LaBeouf went on to begin a relationship with singer FKA Twigs after they met on the set of his semi-autobiographical film Honey Boy. 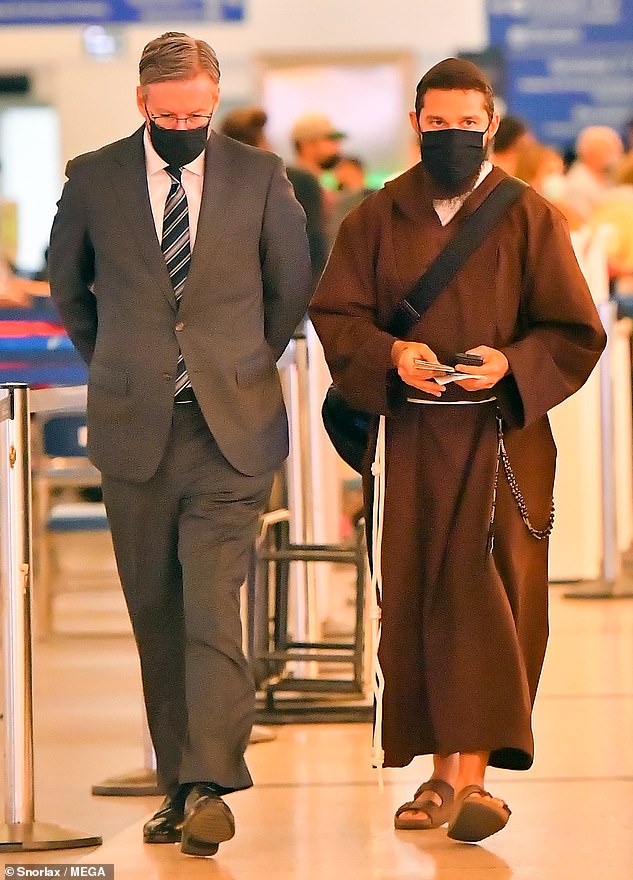 Soon-to-be dad? Yesterday Mia and Shia made headlines after they were spotted enjoying an afternoon at Chuck E. Cheese, where TMZ reported Goth’s bump was on full display

The two eventually split up, and the musician later accused the actor of various forms of abuse and filed a lawsuit alleging emotional distress and sexual battery.

In her lawsuit, FKA Twigs said that the entertainment industry has repeatedly turned a blind eye to bad behavior from LaBeouf, who has a litany of past arrests and accusations of misconduct from other women.

‘Shia LaBeouf hurts women,’ her legal team told the court. ‘He uses them. He abuses them, both physically and mentally. He is dangerous … the days in which LaBeouf can mistreat and harm women with impunity are over.’