Stassi Schroeder had her dream wedding with Beau Clark at the Hotel de Russie in Rome, Italy, she confirmed to Instagram on Thursday.

The 33-year-old blonde reality TV star looked like a princess in her long off-white tulle wedding gown with a sweetheart neckline from designer Galia Lahav with a white veil and jewelry by Nicole Rose Kopelman.

And her husband Beau was dapper in a black tuxedo with a black bow tie as he held onto his wife in photos taken by Cinzia Bruschini Studio and shared to social media. 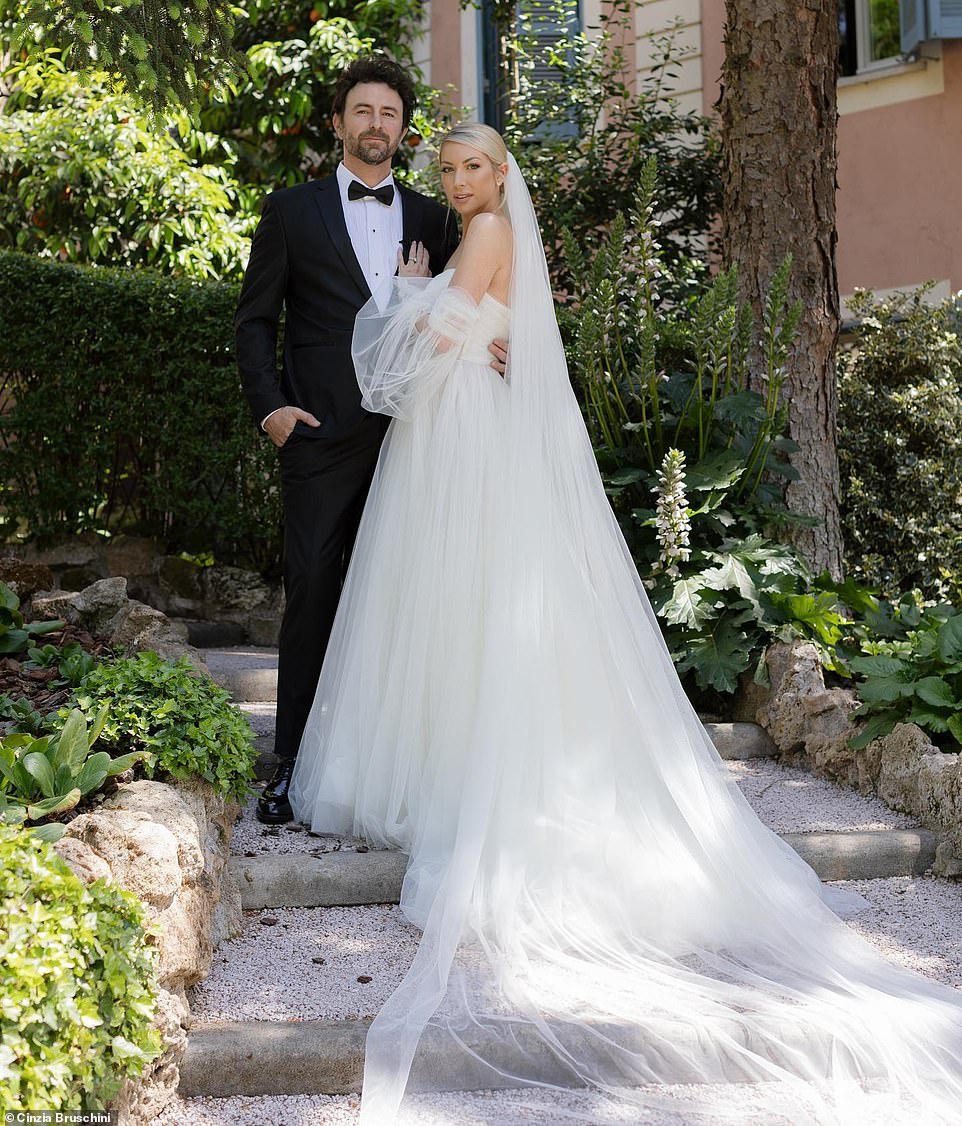 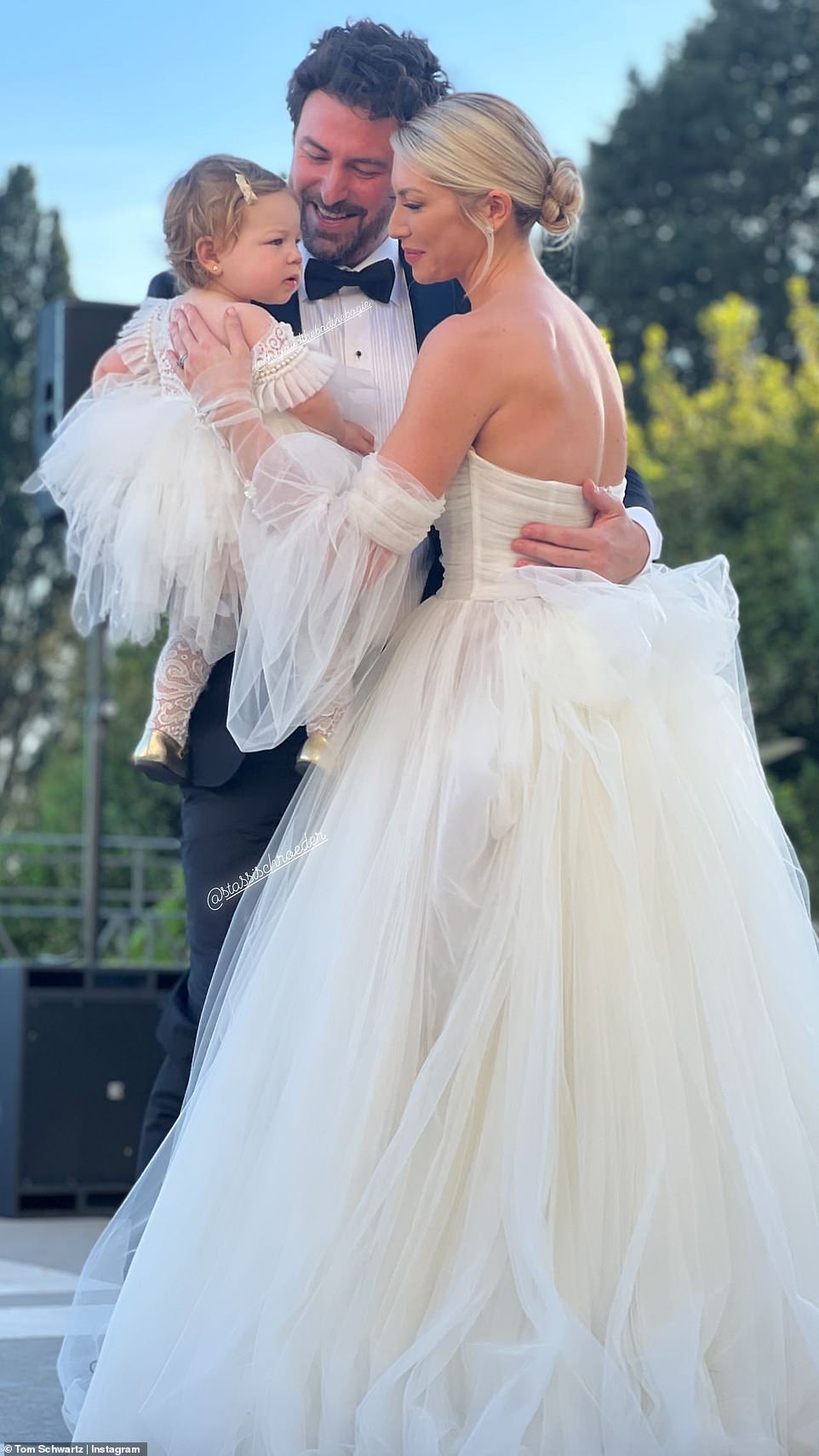 And baby makes three: The couple were also seen smiling as they held their daughter Hartford Charlie Rose Clark, age one, who had on a dress that matched her mother’s gown

Stassi noted the event planner was Alison Bryan Destinations as they walked down the aisle with friends and co-stars Katie Maloney and Tom Schwartz – who recently split but are on civil terms – looking on.

The couple were also seen smiling as they held their daughter Hartford Charlie Rose Clark, age one, who had on a white tulle dress that matched her mother’s gown. The child also had on lace stockings and shiny gold shoes.

The lovebirds can also be seen kissing and hugging in an outdoor area in what looked to be part of their ceremony.

Stassi and Beau started their romance towards the end of 2017 and they became engaged in July 2019.

The two first officially wed in 2020 in a back yard with few in attendance due to COVID. 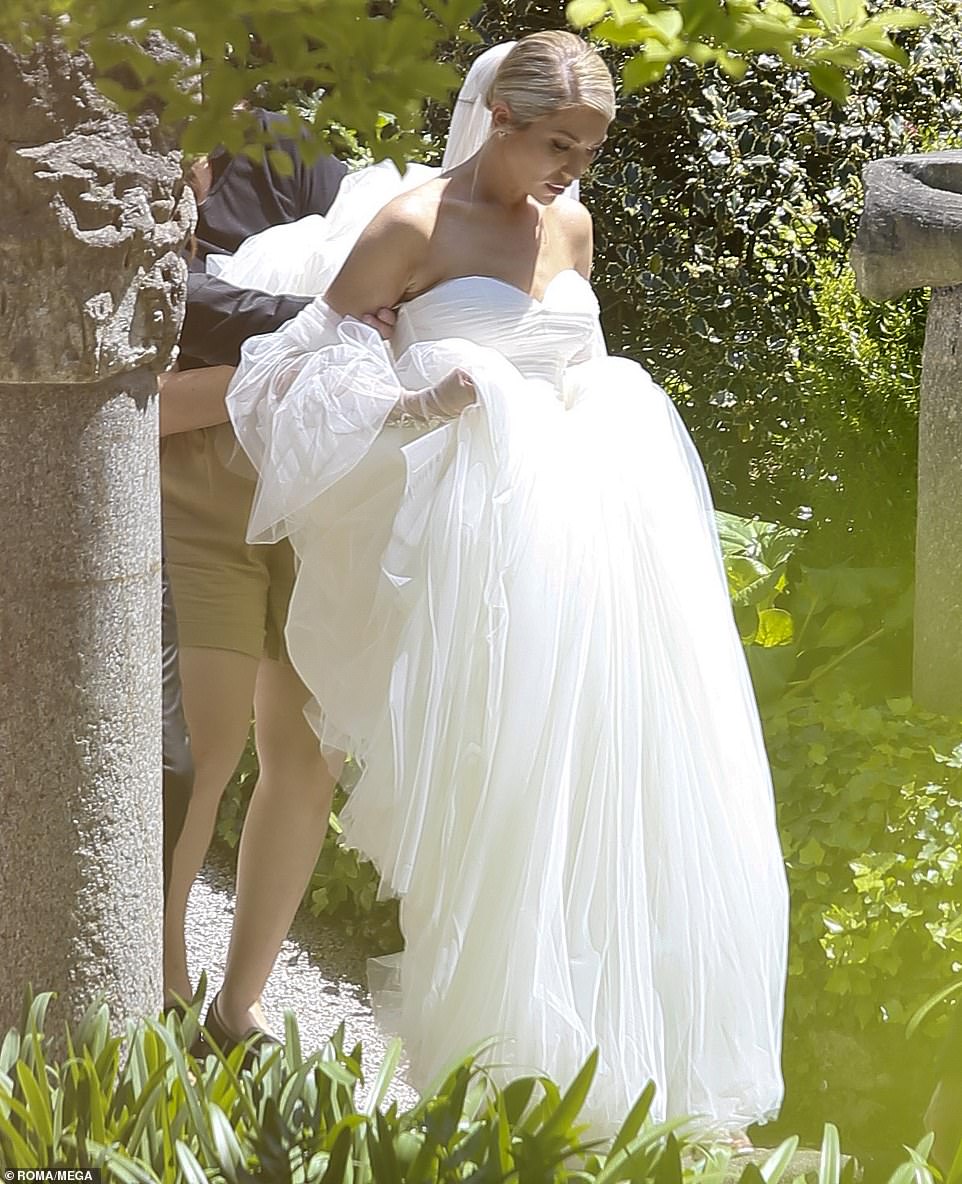 The stunning bride emerges: The siren got some help with her train as she walked into the back yard 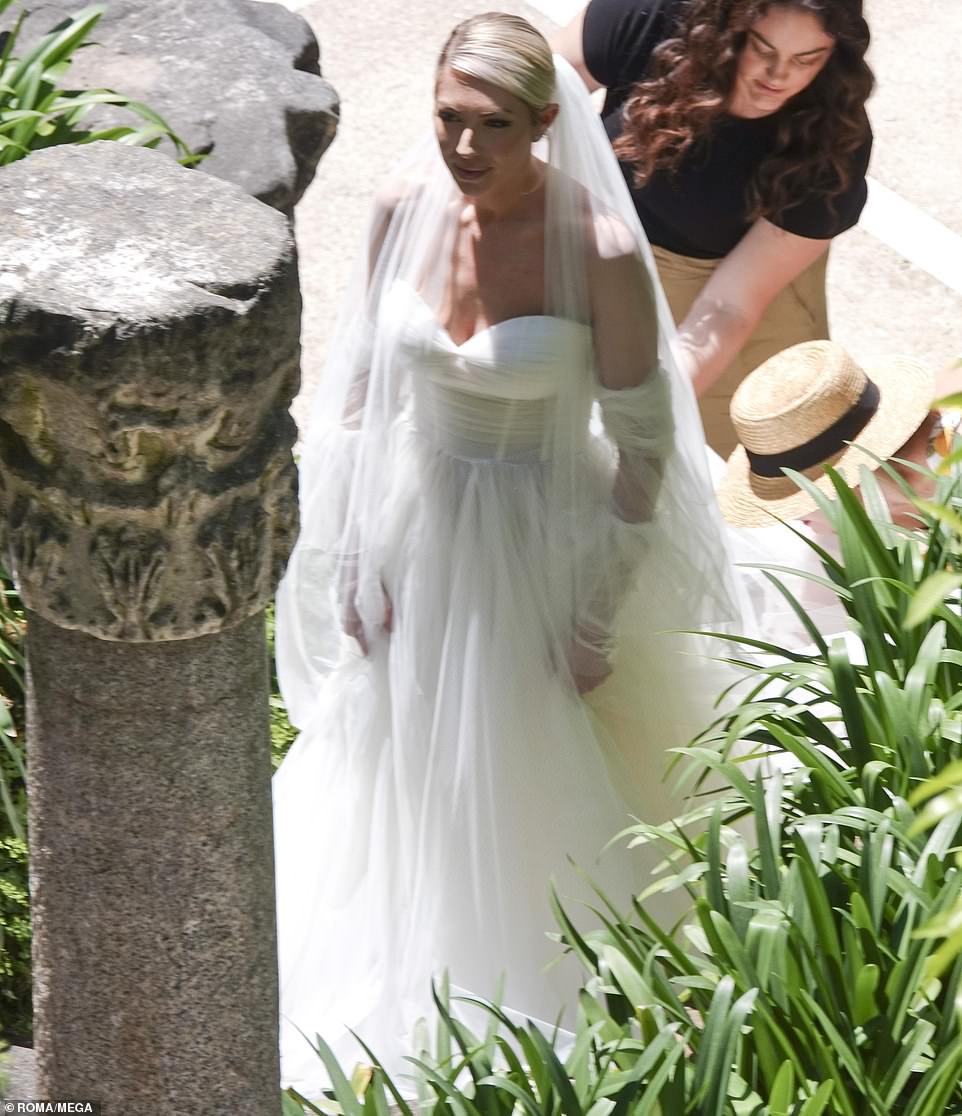 More help for the beautiful bride in white: And in this image she had two attendants taking care of her dress

They had to wait until now to have a big, splashy wedding of their dreams with their friends in Italy.

The former reality star, who was fired from Vanderpump Rules over a racism scandal, was spotted in Italy the day before with some of her former co-stars to kick off her lavish wedding week.

Schroeder stunned in social media photos in a romantic white silk gown for her ‘welcoming party’ on Wednesday. 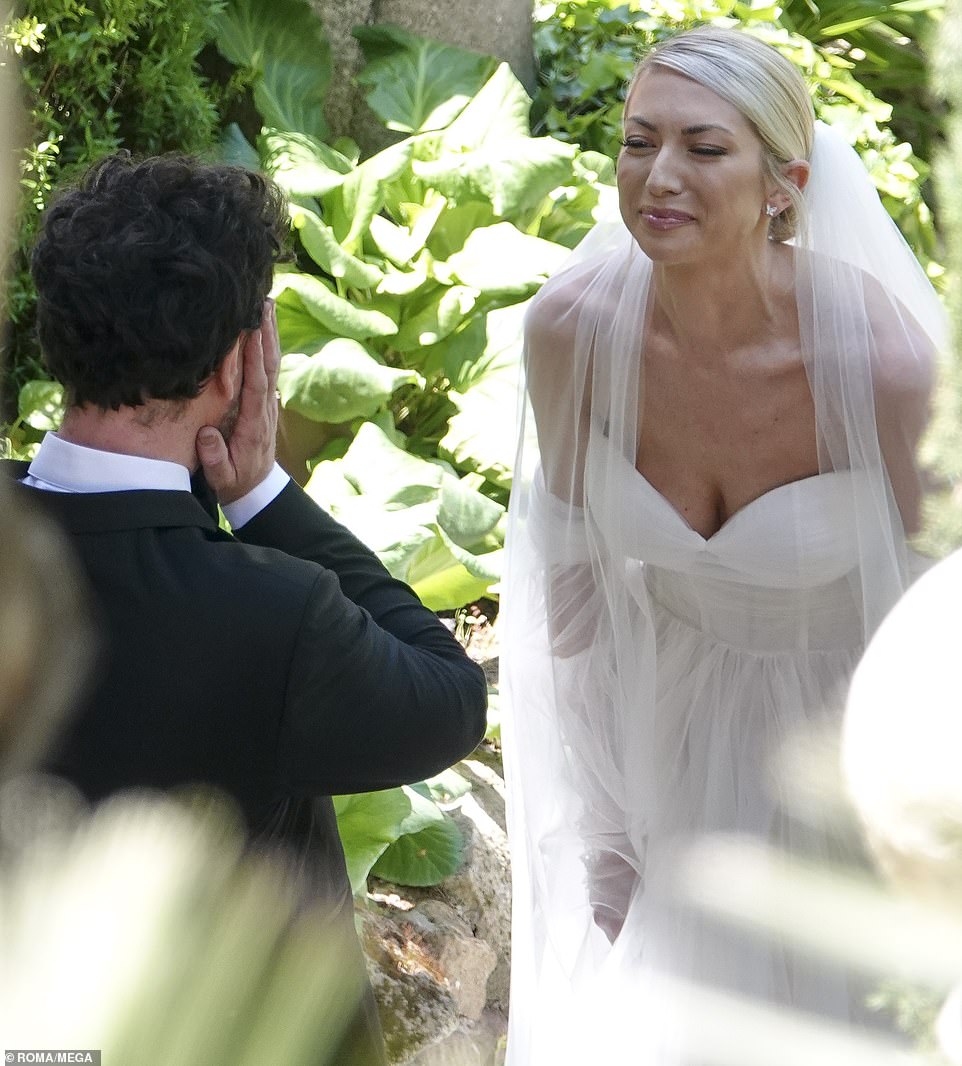 Your bride is here: Beau put his hands up to his face as he saw his bride in her gorgeous gown with a sweetheart neckline; her sweet diamond butterfly earrings could also be seen 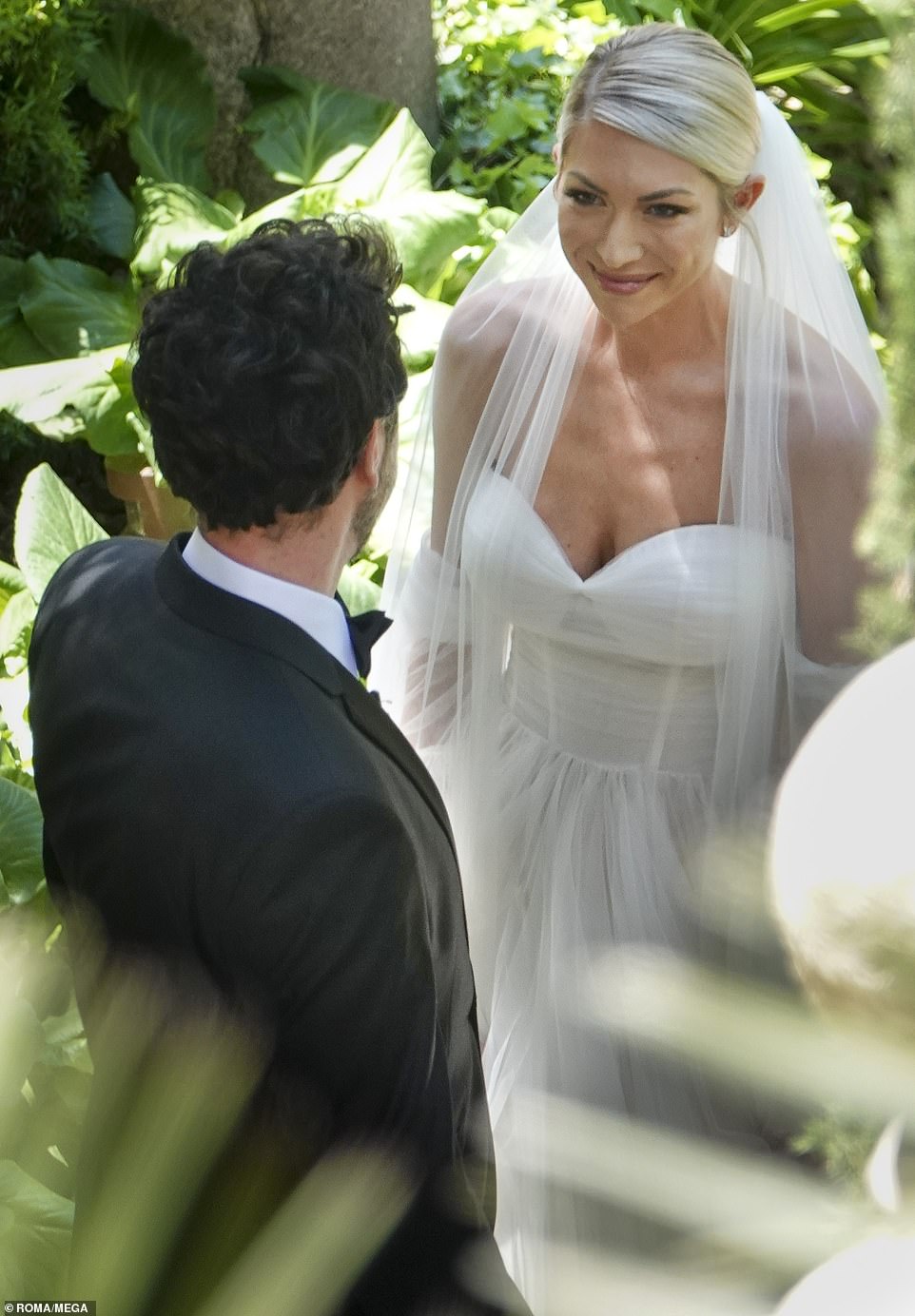 She sure loves her man: Stassi beamed with love and happiness as she stared at her groom with a slight smile 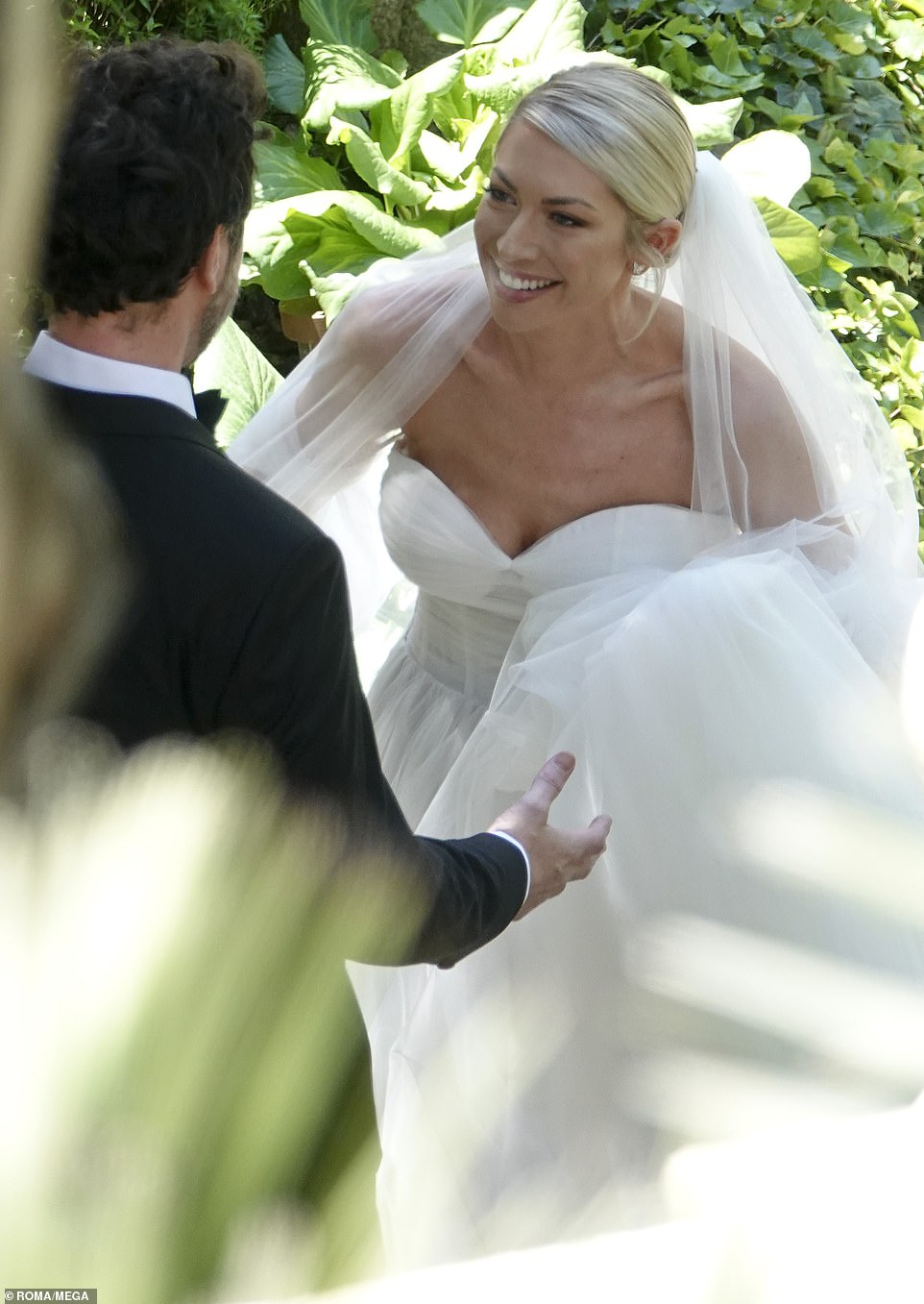 Hooray for Mrs Clark: Beau put out his arms as he waited for his wife to come towards him in her white gown 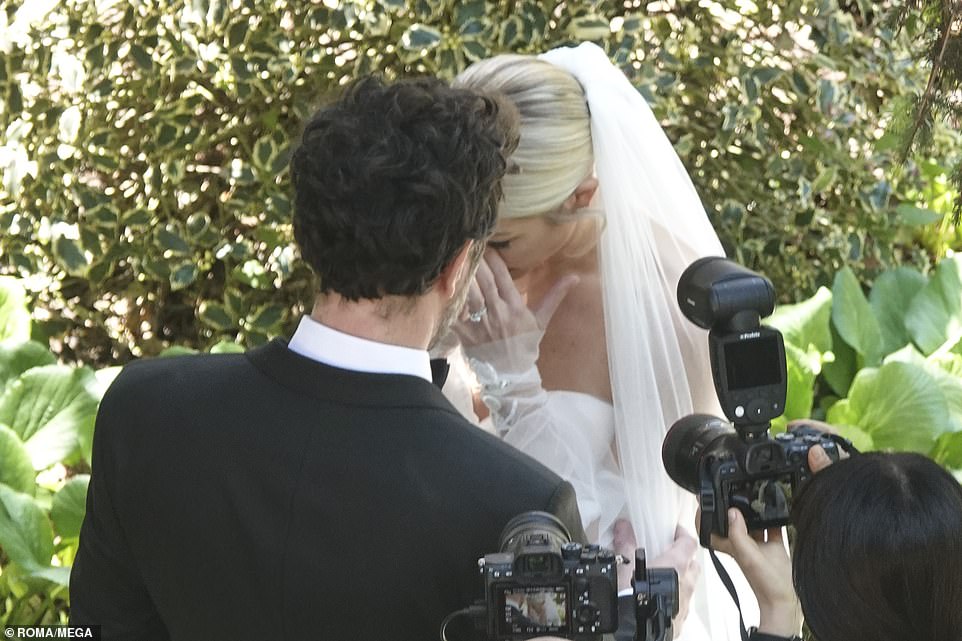 The cameras are very close to this couple: She seemed to wipe away a tear as the photographers came in close

She greeted guests, including Vanderpump Rules exes Katie and Tom.

Stassi and Beau were spotted taking in the Roman sights on Tuesday with their daughter Hartford and some pals.

The canceled reality star appears to have shaken off her tumultuous few years, being axed from Vanderpump Rules, dropped by her team and losing her podcast over allegations of racism.

She stepped out on a beautiful spring day in Italy wearing a flouncy floral strapless top paired with wide leg khaki slacks and low stacked heels. 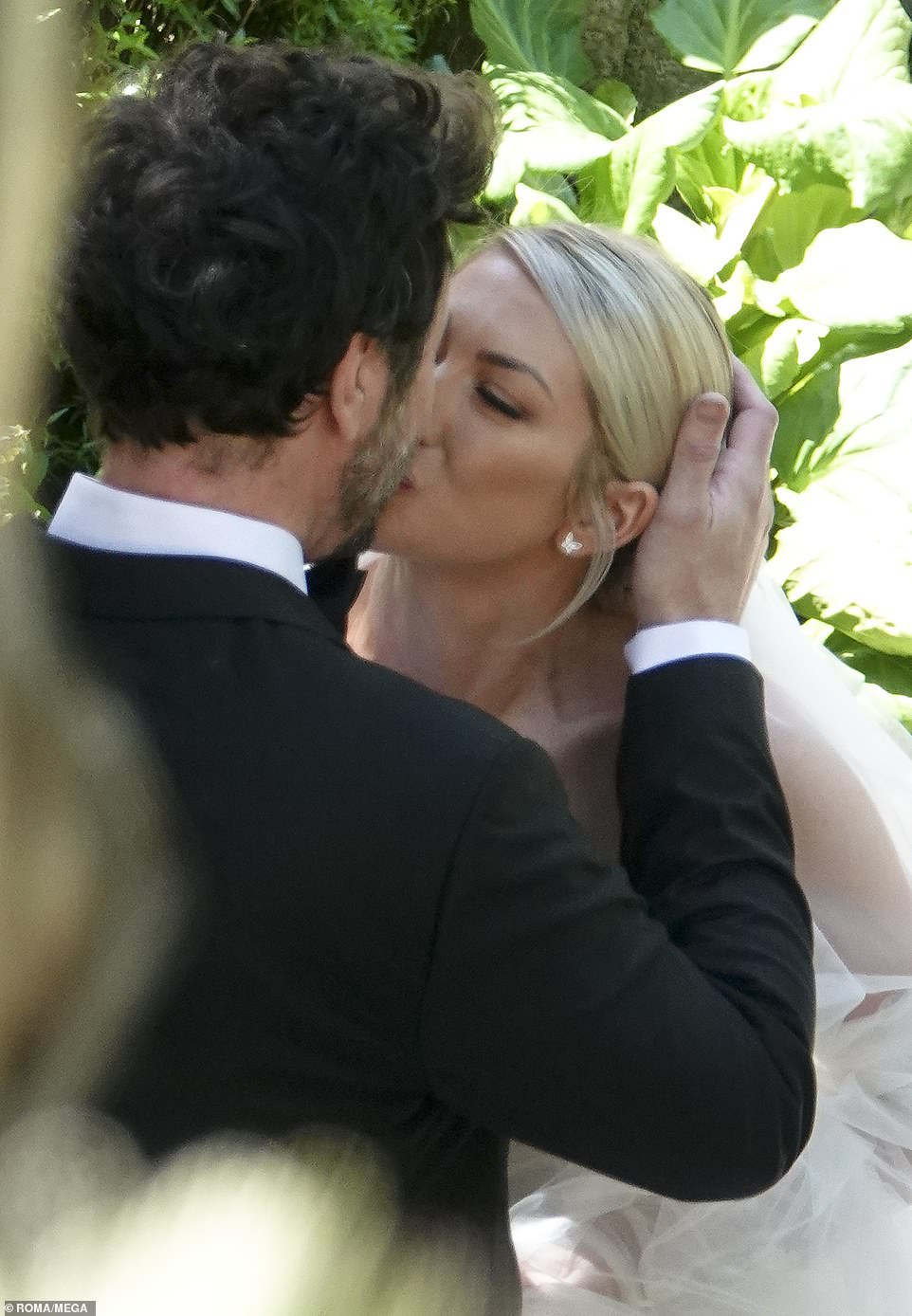 The kiss that says you’re mine forever: The time kissed on the lips as man and wife; though they already got married before 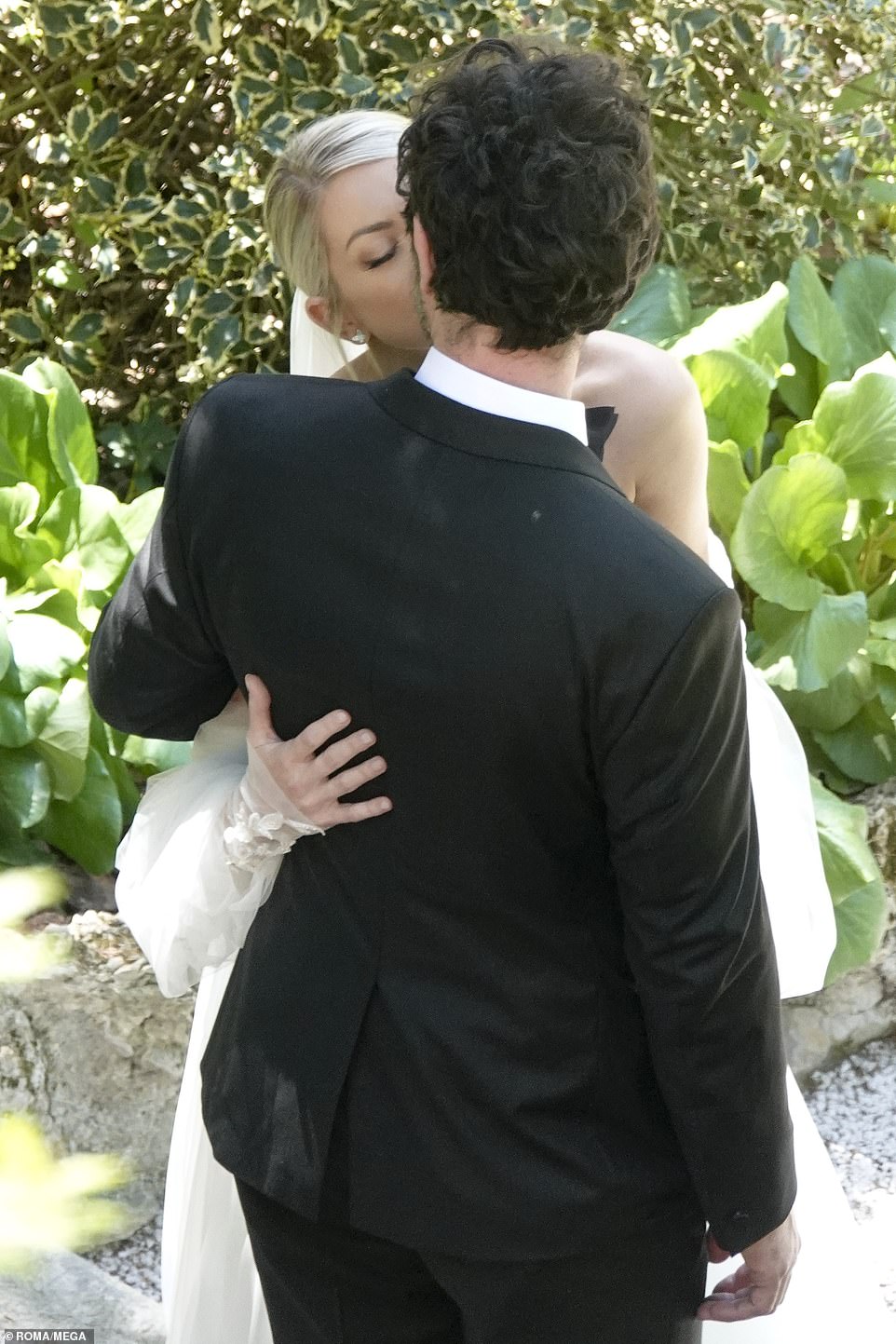 The smooch that spells love: Stassi had one manicured hand on her husband’s back as she leaned in for the kiss 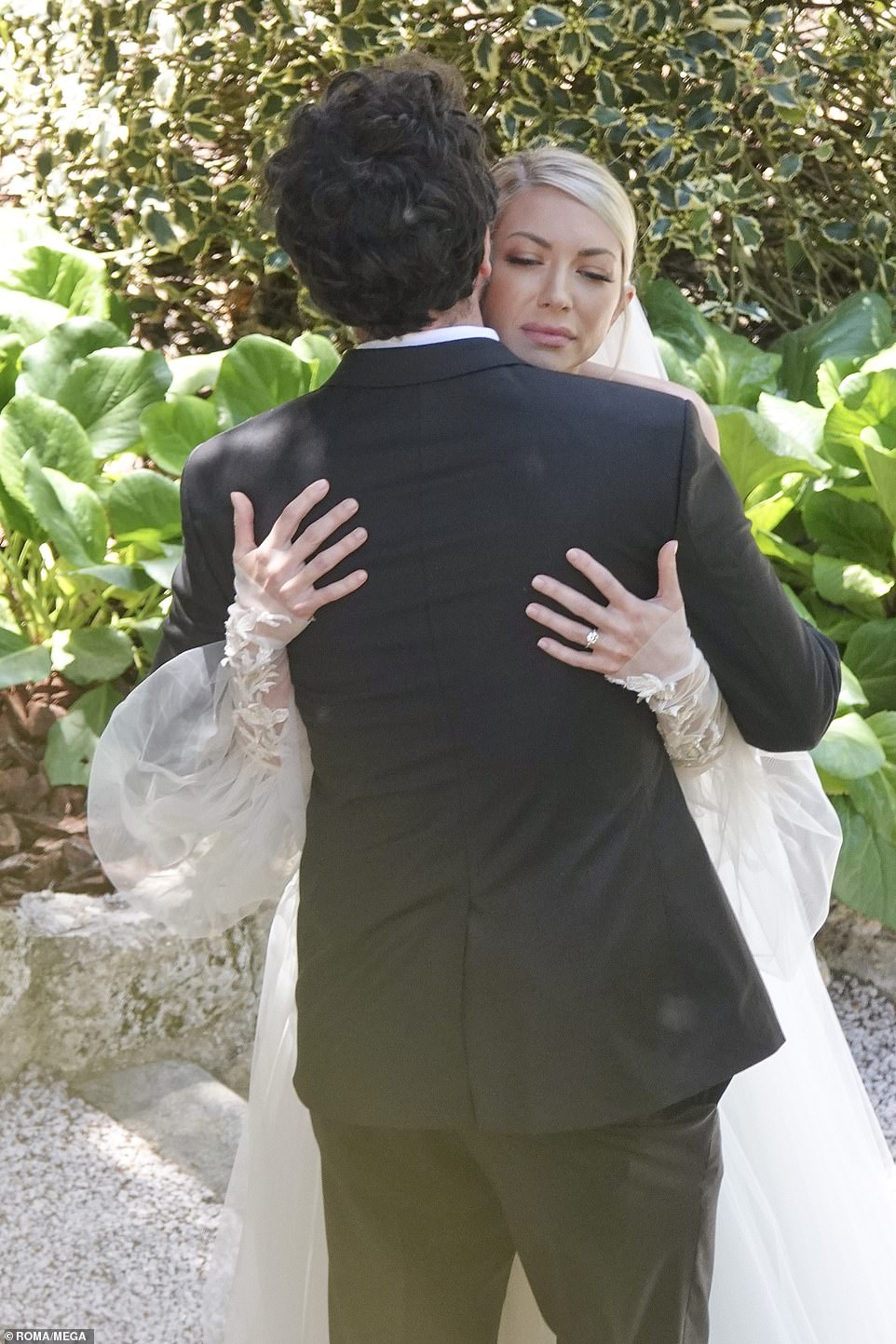 Hugs for my honey: And Schroeder also used both arms to hug her husband with her engagement ring shining proudly

The blonde beauty wore her hair in a sleek low bun and enjoyed sight seeing and pizza with her family and friends.

After Hartford, one, went to bed that night, the grown ups headed out for dinner and drinks.

Images of their night on the town, walking down cobblestoned streets, were shared to social media. 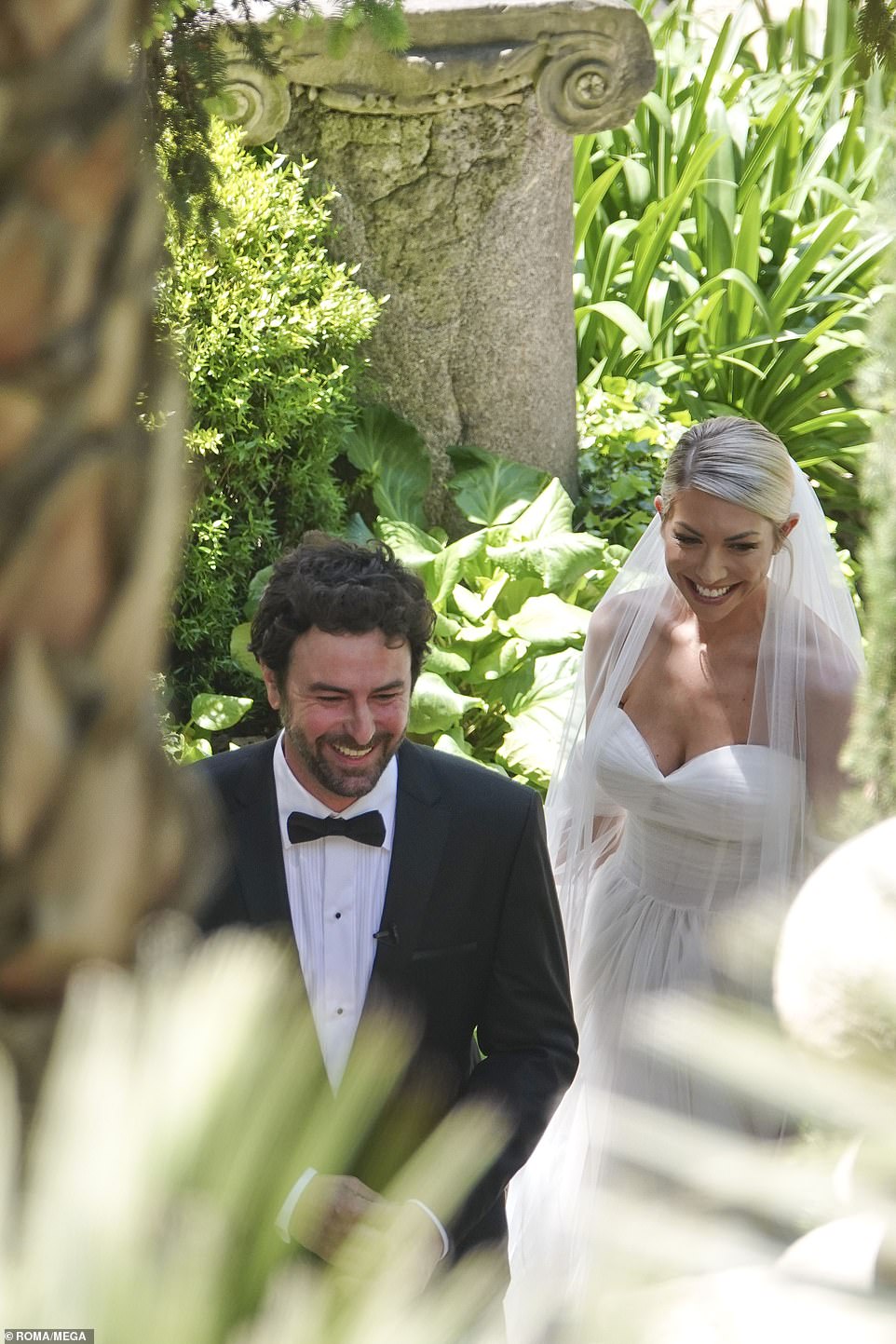 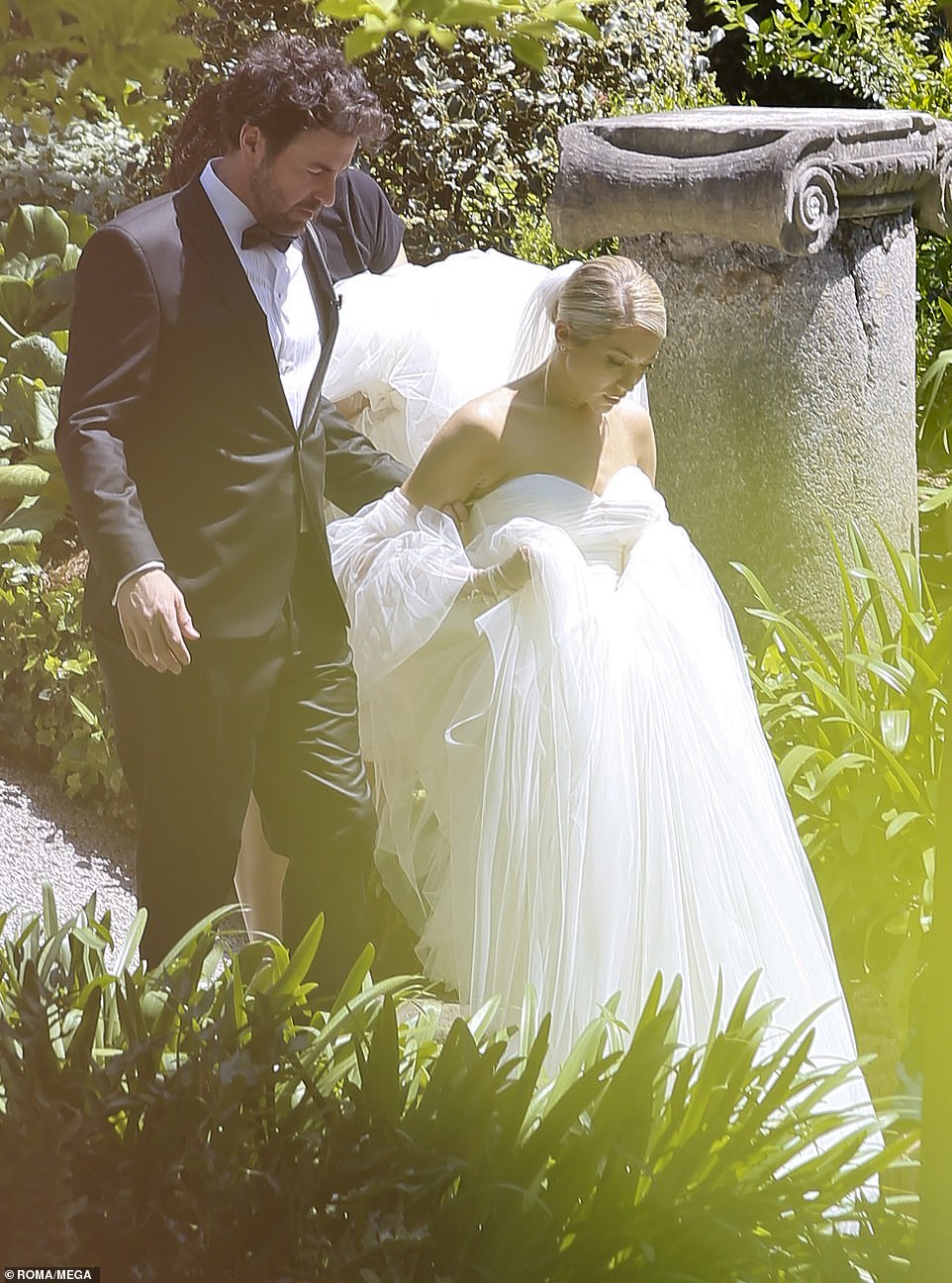 It’s time to go: After becoming man and wife (again), they left side by side to take more photographs

Katie Maloney, who is still starring on Vanderpump Rules, headed across the pond with her soon-to-be ex husband Tom Schwartz to attend the event.

She posted several images of the girls dressed to impress while out for cocktails ahead of the main event later this week.

On Wednesday evening, Stassi and Beau invited guests of their destination wedding to get together at a welcome soiree. 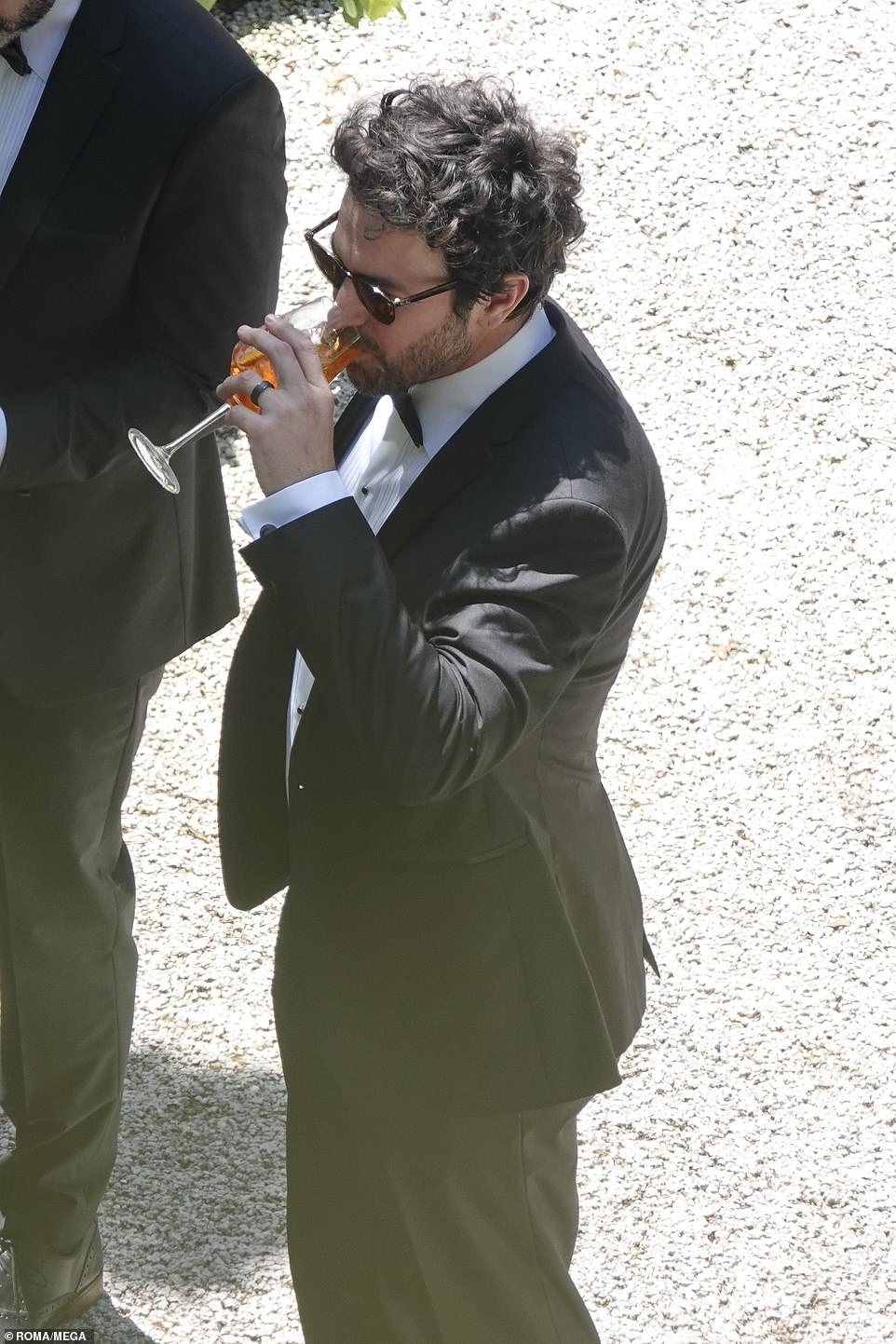 I’ll drink to that: The groom appeared to be enjoying a spritzer as he stood on pea gravel next to his groomsmen 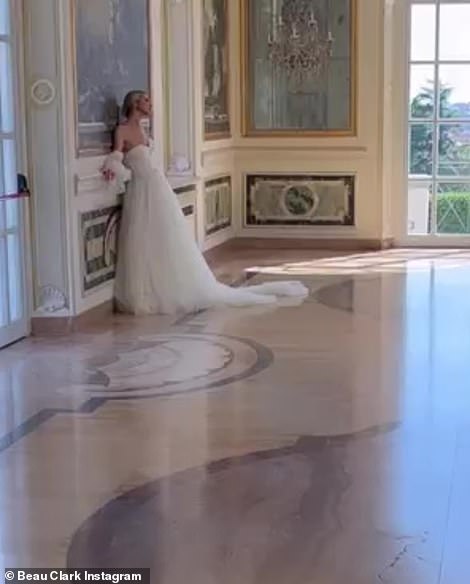 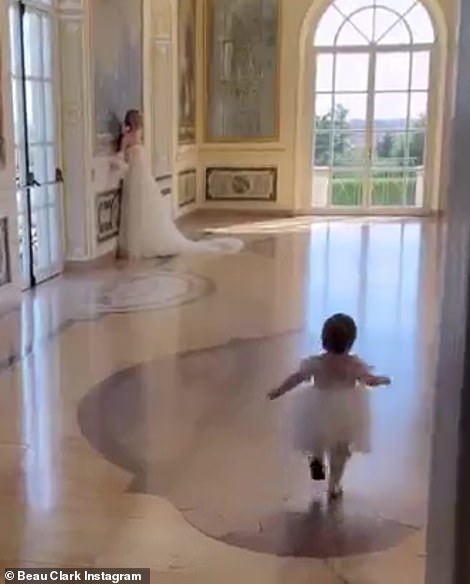 Wedding photos: At Villa Miani Stassi was seen posing in her gown against a mural with a chandelier off to the side

She and her husband appeared smitten in photos shared to social media.

Their 2020 nuptials were small.

The reality TV duo threw together an intimate and socially distanced affair in their backyard instead of their originally planned ceremony in Italy which has just now come to fruition.

‘Today would’ve been our wedding day. We went and did it anyway,’ Stassi captioned footage of their legal wedding. ‘Hopefully Italian dream wedding oct 2021.’ 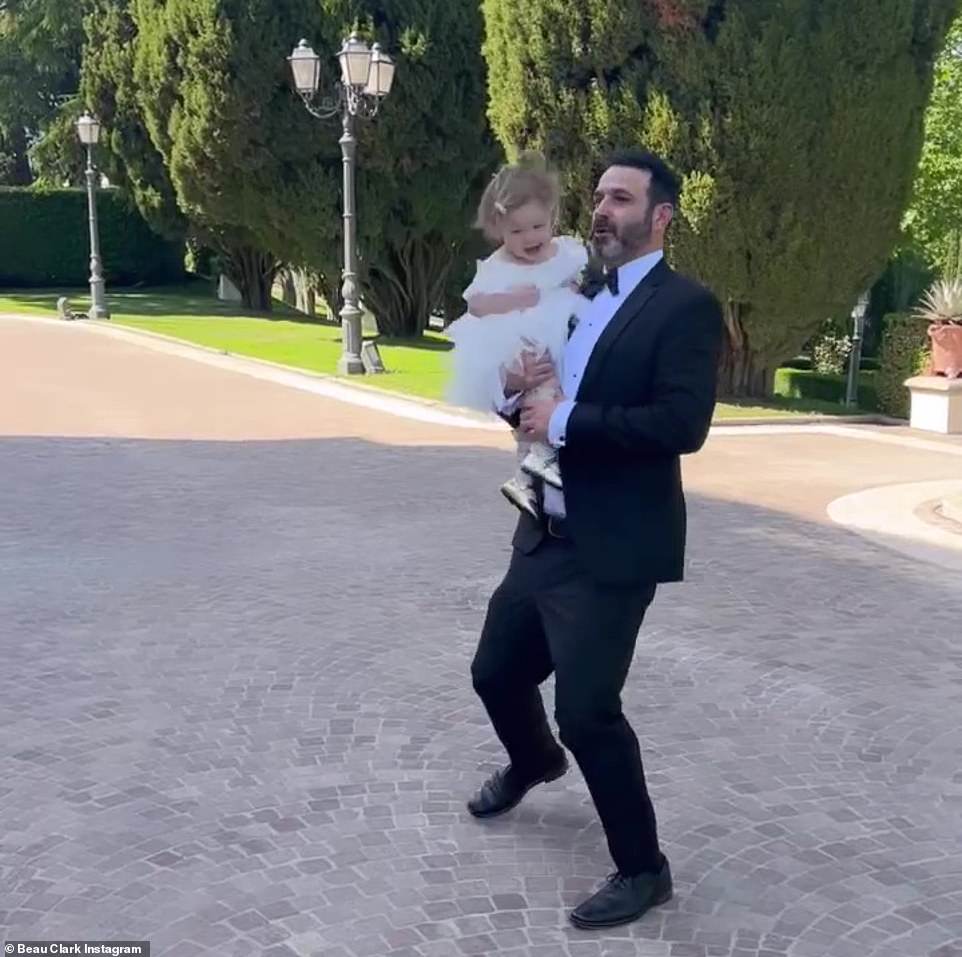 Daddy with his little girl: Beau was seen in his tuxedo as he held his child who wore gold shoes

Unfortunately for Stassi, 2021 came and went in the height of the coronavirus crisis and she wouldn’t get her dream event until the following year.

Bravo cameras were expected to capture the ceremony, which would have been aired on season nine of the show, before Stassi was axed.

Stassi’s past racially insensitive actions – she reported her black co-star Faith Stowers to the police in 2018 for a crime she did not commit – resurfaced in 2019 leading to her firing. 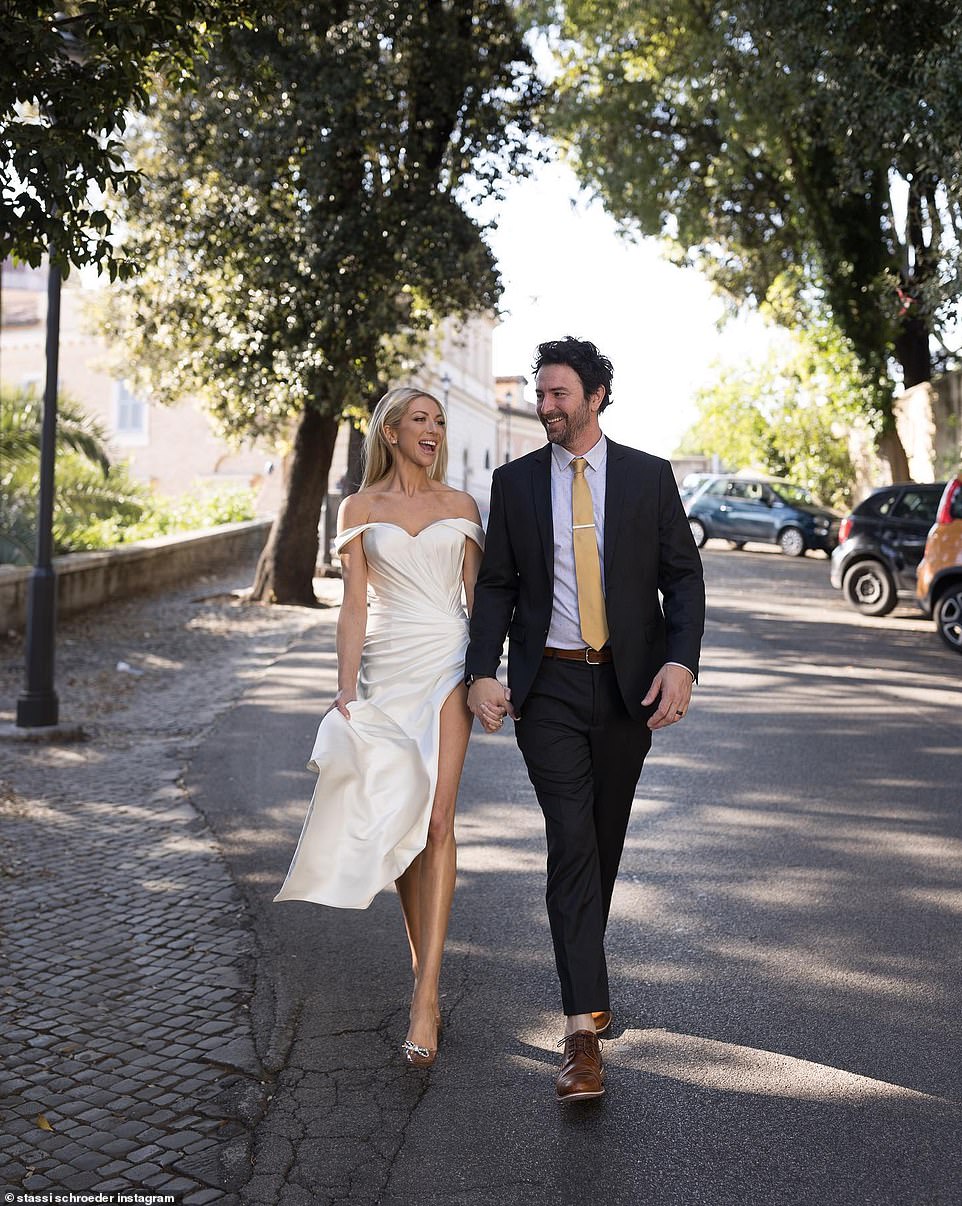 Ready to greet their guests! Stassi and Beau Clark were seen in Rome the night before for their welcoming party 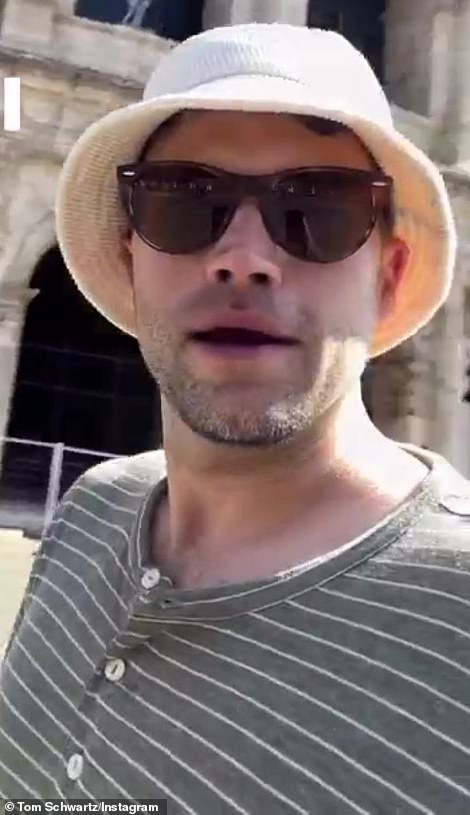 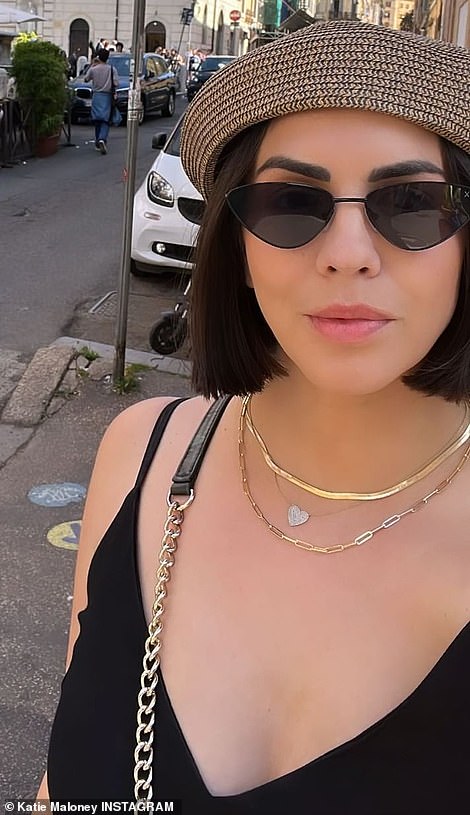 All good! Soon-to-be ex husband and wife Katie Maloney and Tom Schwartz had no qualms about putting their divorce aside to celebrate their friend in Italy

Not only did she lose her part on the hit reality show, but Stassi’s podcast Straight Up With Stassi was dropped from endorsement deals and she was let go by her PR agency.

The star has come out the other side of the scandal and recently released her second book, Off With My Head: The Definitive Basic B***h Handbook to Surviving Rock Bottom, which shot to number eight on the New York Times Best Seller List.

Stassi has maintained her relationships with most of her former co-stars and was seen in April celebrating Brittany Cartwright and Jax Taylor’s son’s first birthday along with Lala Kent, Kristen Doute, Katie Maloney and Tom Schwartz. 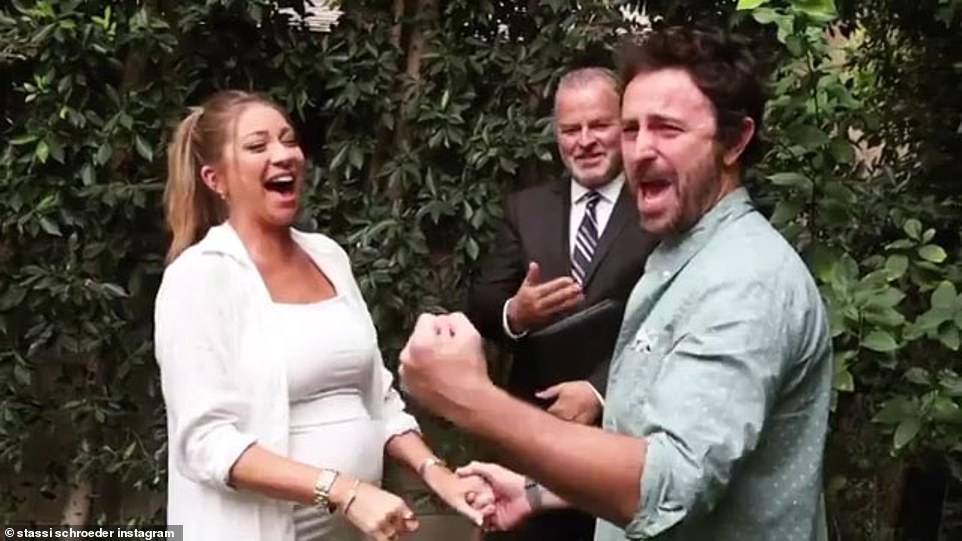 Changes: Reality TV cameras were supposed to be rolling when Stassi tied the knot during COVID but she was fired prior to the nuptials (Pictured September 2020)