‘I’ve been through so much bloody loss but I’ve camouflaged my grief’: Bros star Matt Goss fell out with his twin and lost his sister, his mum – and his millions… Now, as he signs up for Strictly, he tells of the toll it all took

He previously fell out with his twin and lost his sister, his mum – and his millions.

Ands after signing up for Strictly, Matt Goss has spoken about the toll it all took on his mental health and how he ‘camouflaged’ his grief.

The Bros star, 53, said of the ‘complicated’ relationship with his bandmate and brother: ‘I would do anything for Luke. If we both feel a little bit wobbly or vulnerable, we’re there for each other certainly. 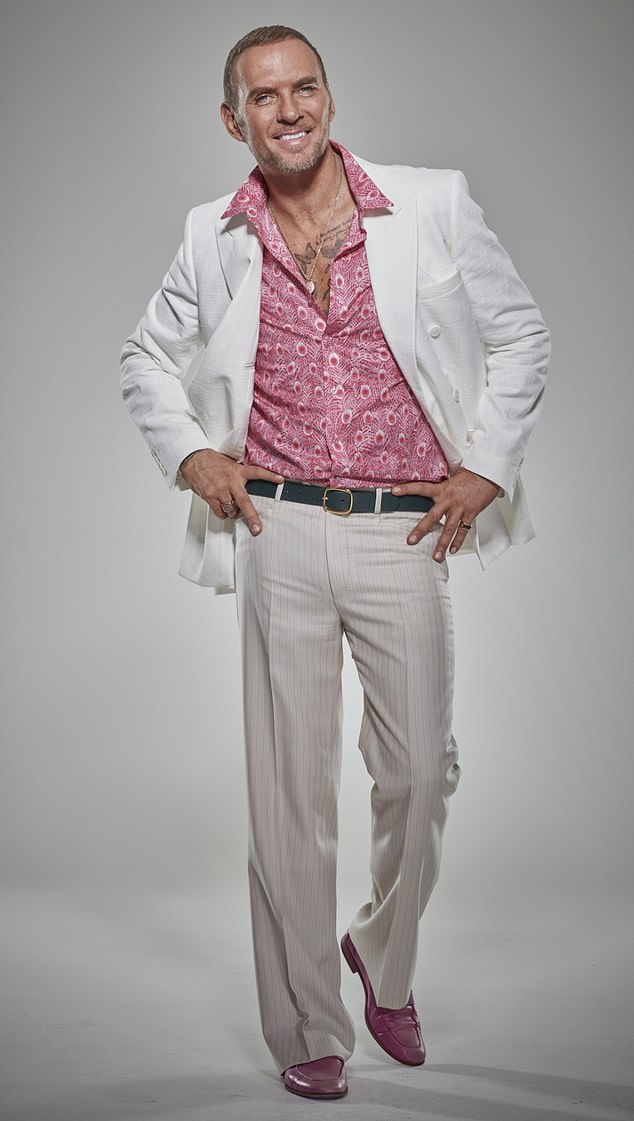 ‘I’ve been through so much bloody loss but I’ve camouflaged my grief’: Bros star Matt Goss fell out with his twin and lost his sister, his mum – and his millions… Now, as he signs up for Strictly, he tells of the toll it all took

‘But we know each other so well we know exactly where each other’s buttons are,’ says Matt.

Indeed. Anyone who’s seen their brilliant documentary about their years together in one of the most successful British boy bands of all time, Bros: After The Screaming Stops, knows only too well how easily those buttons are pushed.

For those who haven’t, let’s just say if the film, which won the National Film Awards best documentary in 2018, had been released when Brosmania first gripped the country in the late 1980s, there would have been more bleeps to cover the swearing than actual music. 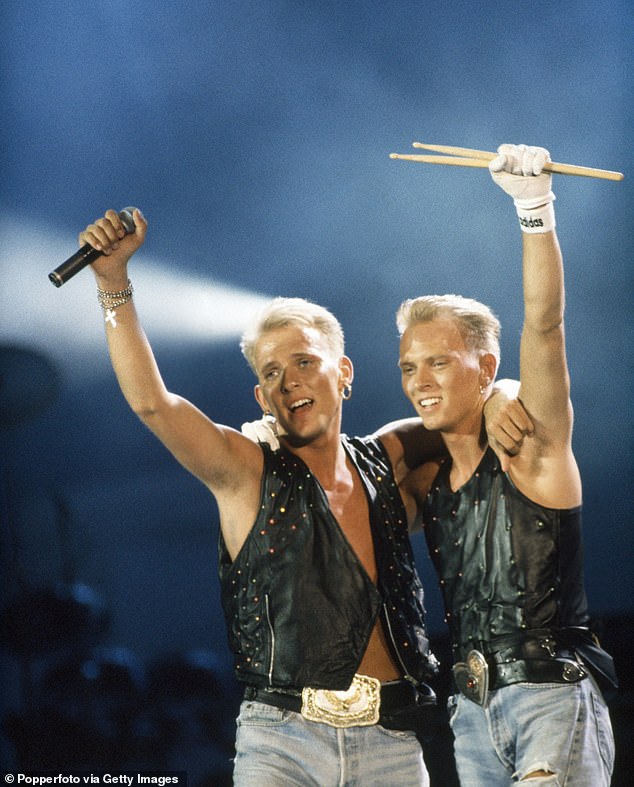 So much so, you couldn’t help but worry for their blood pressure as Matt, the band’s frontman, and Luke, the drummer, went head-to-head.

And now? Matt is 53 with less hair but a sense of self that’s enormously attractive. He’s also extremely approachable and seems, I tell him, wondrously at ease.

‘For the first time in my life I believe I have people around me who really genuinely care,’ he says.

‘For me there’s been a guilt that comes along with my happiness sometimes because I want to make sure that everyone has that same level of happiness.

‘If you’ve seen the film, you’ll see Luke said I was chosen or something like that. For me, I was just going out doing my job, working the crowd.

‘When you’re front of the stage you’ve got to do that and I’d love my brother smashing away behind me 100 per cent.

‘The drummer is the backbone of a band but as a frontman you’ve got to grab the crowd by the throat.

‘I felt I had to apologise for being the frontman for the past three decades. Those days are over.’

Little more than a week ago, Matt returned home to London for good after more than a quarter of a century in the States where, during his 11-year sell-out residency in Las Vegas, his success on The Strip was compared to that of Frank Sinatra.

Next month, he will compete in Strictly Come Dancing which, he says, ‘will force me into a place that’s not my comfort zone. I’d win Baftas, play the O2, do great, great promotions, then go back into this kind of reclusive place. 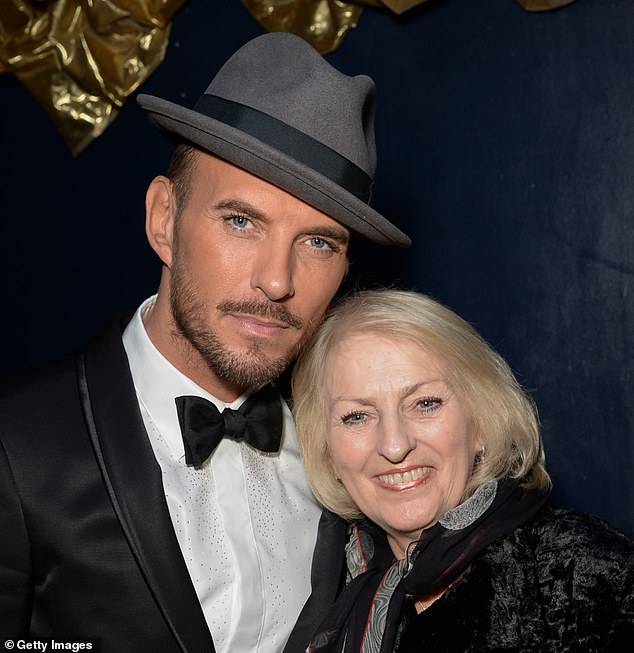 Doting mum: Matt, pictured with his mother Carol Goss in 2013 in London. He said: ‘She really was my best friend. We spoke three times a day on FaceTime’

‘It doesn’t matter how close you are to somebody, you can’t expect them to be as connected to the show as you are every single night.

‘You find yourself in your own thoughts a lot. It almost goes beyond loneliness. After the music stops and the crowd with it, there’s a quiet silence that becomes quite deafening.

He has a relatively new girlfriend — jewellery designer Chantal Brown, whom he began dating earlier this year and who is ‘sensitive, kind and makes me laugh’ — a new management team and new rules.

‘I’m not going to be anyone’s punching bag,’ he says.

‘I’ve learnt to set boundaries. If there’s an argument, for example, I’ll let the argument be. I will not always be the one who will call back or try to find an immediate resolution.’

Does he mean his brother?

Matt chooses his words carefully. ‘Me and my brother could not be more different. We are different in the way we are, the way we dress, the music we listen to.

‘Yes, we’re identical twins but we don’t even really look exactly the same any more. 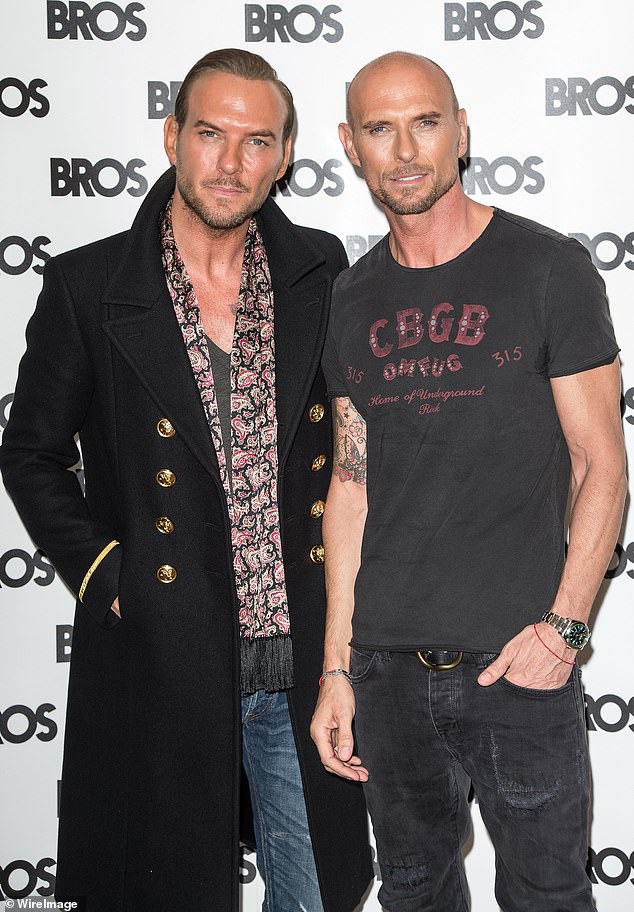 Family: The Bros star, 53, (left) said of the ‘complicated’ relationship with his bandmate and brother: ‘I would do anything for Luke (right). If we both feel a little bit wobbly or vulnerable, we’re there for each other certainly’ (pictured in 2016)

‘As a twin, when you’re younger, you pine for your own identity. I can give you an absurd example — I broke my wrist when I was a kid. When I went to school I was asked: “Did Luke break his wrist as well?”

‘I think there is definitely sediment [in our relationship] from the past. Sometimes the sediment is at the bottom of the bottle and the water is beautifully clear, then there’s a little shake and that sediment muddies the water again.

‘Maybe there’s been a sense of like . . . I still don’t quite know, if I’m honest. I’ve just been doing my thing. He’s been doing his thing.’

Luke’s ‘thing’ is embarking upon a new music career after two decades as an actor.

An ‘energised’ Matt wants to do, well, pretty much everything really.

As well as Strictly, he has plans for a Matt Goss lifestyle brand because ‘all the beautiful stuff is so outrageous you need to take out a mortgage. That baffles me,’ he says.

He is also releasing a new single, Are You Ready, and is ‘dabbling in movies’ as ‘Luke doing music allows me to. [Before] I guess I’d wanted to respect his real estate. I am at a point now that I think we each have our own identity.’

The other day, he tells me, he received a video from his brother, who happened to move house in Los Angeles (after separating from his wife, Shirley, whom he married in 1994) the day before Matt packed up and left Las Vegas.

‘We both had a hard time knowing we were not going to be in the same country for the first time in many, many years, but me leaving the States has definitely softened the edges [of our relationship].

‘I feel there’s a tenderness that’s starting to creep into us.

‘He sent me a video the other day. It was very loving and that meant so much to me. He just wanted to tell me how he was feeling.

‘It was very, very open and very honest. I respond to that.

‘I love Luke but I am now daring to be a little bit more selfish and think of my own life, my own heart and my own relationships, because I honestly have burnt myself out making sure that my family is OK. I need to say: “It’s my time.”

Matt is 11 minutes younger than his twin brother but is the one who, he says, ‘people who know me will say: “Oh, Matt will get it done.”

He nursed his beloved mum Carol in her final months of cancer in 2014, cared for his stepfather Tony for four years after her death and, all the time, kept going on stage and ‘bending the audience in half’.

‘I’ve been doing that for five or six years with the band and 27 years without them. I will bend any room in half, any stadium, any arena. I’ve completely camouflaged my grief with work.

‘But I worry — worry about the people I love because I’ve been through so much bloody loss.’

Indeed. Matt lost his sister Carolyn who was killed by a drunk driver when he was 20 and Bros was at its peak.

He then lost the band when Luke decided to quit a few years later, lost ‘millions’ after ‘trusting the wrong people’ and then lost his bodyguard who died of a brain tumour.

‘When I left, it all kind of hit at once. I lost millions of dollars and then my bodyguard died so it was all one after the other. 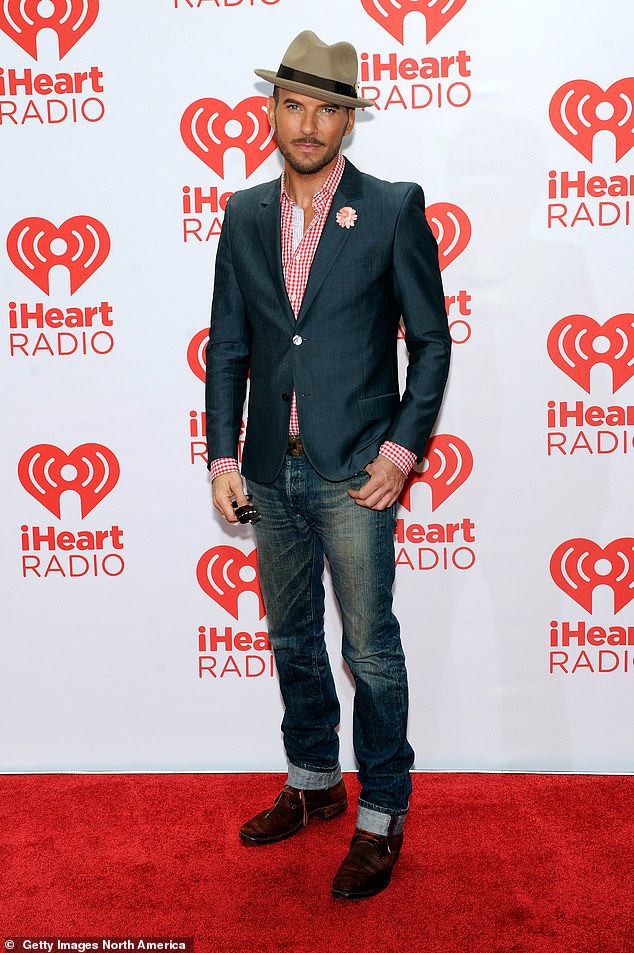 Looking good: Matt is 53 with less hair but a sense of self that’s enormously attractive. He’s also extremely approachable and seems, I tell him, wondrously at ease (pictured in 2013)

‘It was a live-or-die moment, I can promise you that. It was give up or get up — and keep getting up.

‘You get up. When mum passed away, Tony, my stepfather, wasn’t well. I gave mum my word that I would take care of him, so he came to live with me for four years.

‘I wouldn’t say I was his care-giver entirely but there was certainly a role. It was a big responsibility.

‘He still lives in one of my homes in the UK. It was me that made sure he was OK. It wasn’t my two other brothers [Luke and his stepbrother Adam].

‘I think I wouldn’t have said it two years ago, but I’m proud that I take care of people and step up.’

He takes a deep breath. Matt doesn’t want to weep but you know he carries these losses with him. You sense he’s bottled up a lot in those Las Vegas years.

‘When I was packing my home in America it was an eight-week move,’ he says. ‘I let go of some of mum’s clothing and some pictures — stuff I knew she didn’t particularly like.

‘When I actually put them in the bin it was a physical experience for me.

‘She really was my best friend. We spoke three times a day on FaceTime. I made her laugh. I’d be on FaceTime [without the video camera on] and say: “Can’t show you me right now, mum.” 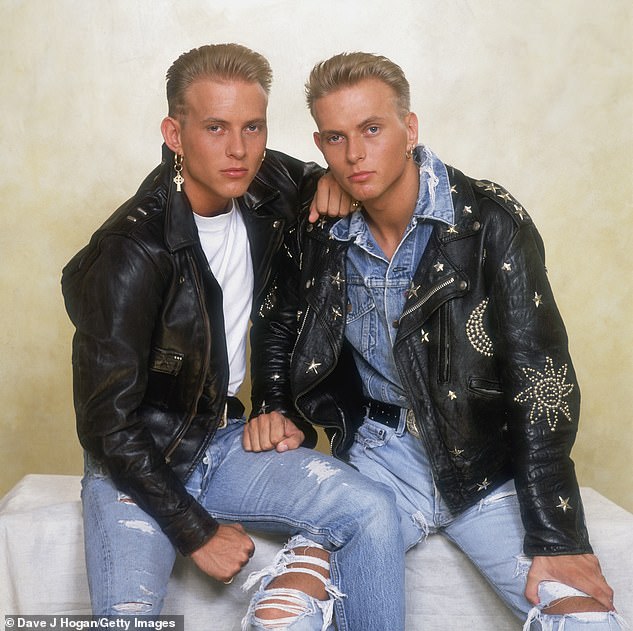 His eyes dance at these memories and then he falls sad. You want to put your arms around him.

‘Before my mother passed, she felt very thirsty. We wanted to hydrate her but the IV ruptured her stomach.

‘She screamed at the top of her lungs and vomited blood on me. My dear mother’s blood went all over me.

‘Then the morphine had to be kicked in. She was the most elegant, shy, graceful, kind human being and that was one of her last memories.

‘Within 12 hours of that [she’d been taken to hospital], my brother and I both had our hands on my mum’s chest and she took her last breath.

‘So Luke’s all I’ve got left. He’s my twin. Outside of that my dad lives in France. I love my dad but he’s not necessarily somebody that’s there for me if the s*** hits the fan.

‘It’s not that I don’t love him, but my family has never made me feel they’re necessarily proud or interested [in his career].

‘Luke is my only family so after losing so much there’s a fear, because if anything happened to my brother . . . I don’t know.

‘How would I cope with any more loss? Sometimes people think you have this kind of unicorn life, but I go through just the same things as everyone else and then you have to go back on stage.

‘I’d lose myself in my audience. But those days are over, which is why I feel so blessed to have the people I have around me.

Matt Goss’s new single, Are You Ready, produced in association with Lewisham Records and Orbital Digital, is out now. 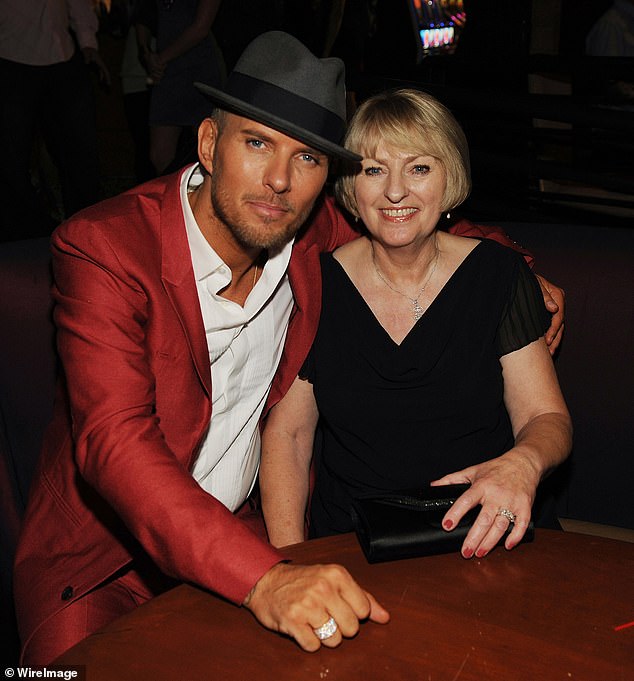 Tragic: ‘Before my mother passed, she felt very thirsty. We wanted to hydrate her but the IV ruptured her stomach’ (pictured in 2009)