She’s currently on a sun-soaked getaway to Italy with her boyfriend Jonathan Davino.

And Euphoria star Sydney Sweeney sent temperatures soaring as she put on a PDA-packed display on Wednesday with her flame.

The actress, 23, sizzled in a tiny pink bikini as she locked lips with her beau on board a luxurious boat off the coast of Capri. 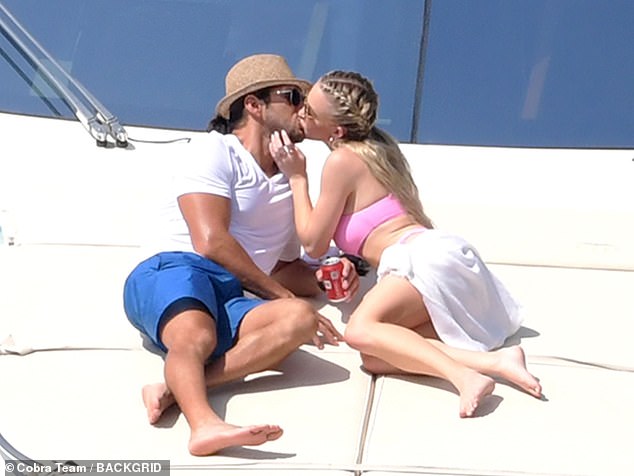 All aboard the love boat! Euphoria star Sydney Sweeney sent temperatures soaring as she put on a PDA-packed display on Wednesday with her boyfriend Jonathan Davino

The couple only had eyes for each other as they lounged atop the boat, sharing kisses.

The White Lotus actress put on a cheeky display as she leaned in to smooch her shirtless boyfriend.

Sydney looked stunning with her blonde tresses styled into braids and a white sarong tied around her slender waist.

Her beau sipped from a canned drink as he hung out wearing blue trunks, a fedora, and a white T-shirt that he ended up ditching. 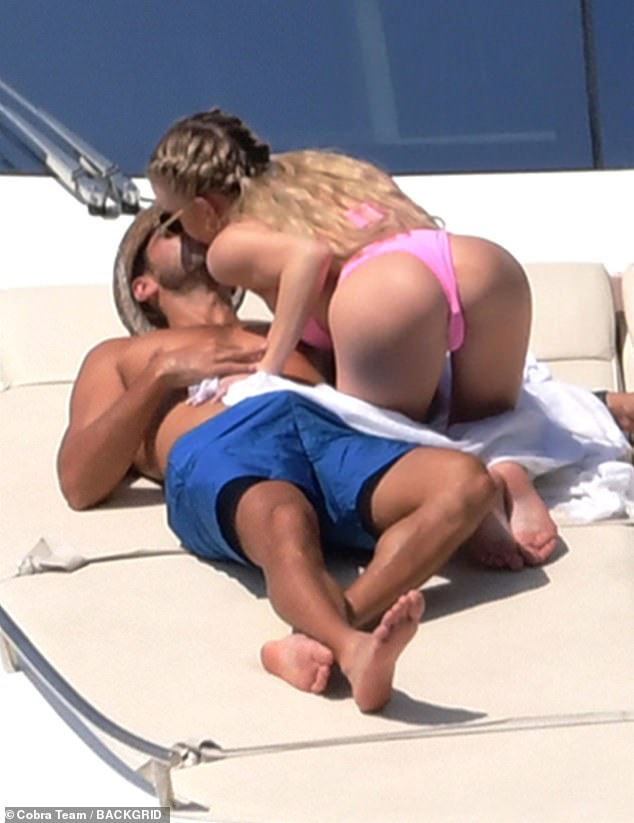 That’s amore! Sydney locked lips with her shirtless beau during their trip to Italy 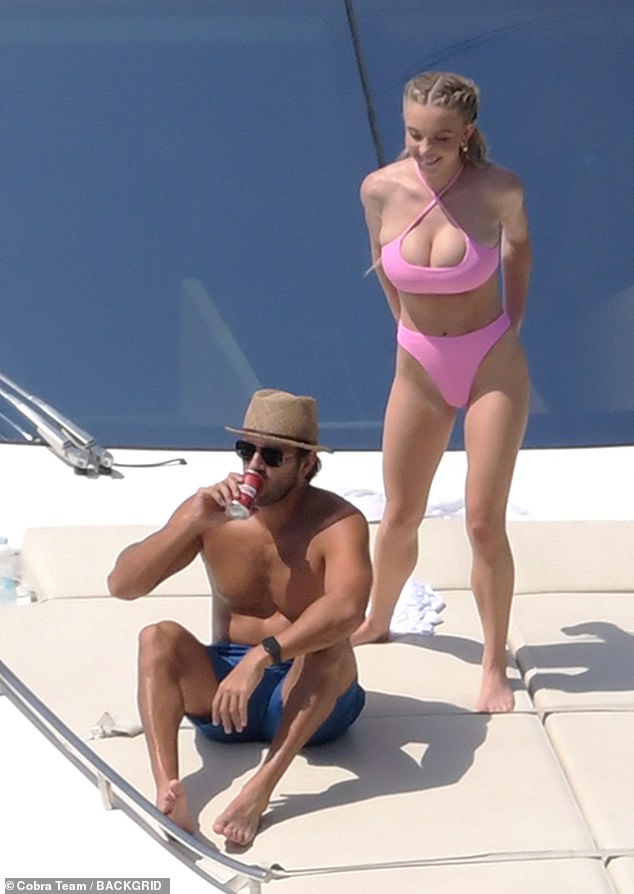 Skin is in! The actress put on a busty display as she hung out on the boat in her tiny bikini 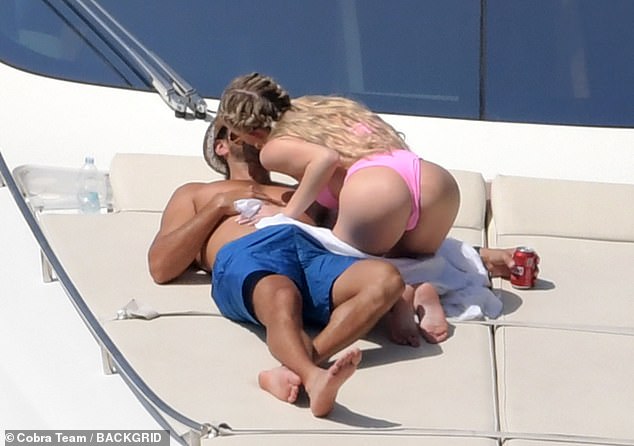 Kiss me! The couple only had eyes for one another

Sitting across from one another while basking in the sunshine, the couple couldn’t have looked any happier taking in the picturesque views.

Sydney looked every inch the bathing beauty as she kicked back luxuriously at the edge of the boat, her head tilted beside her shoulder.

On top of catching some rays, there was plenty of fun in the sun to be had by Sydney and her friends. 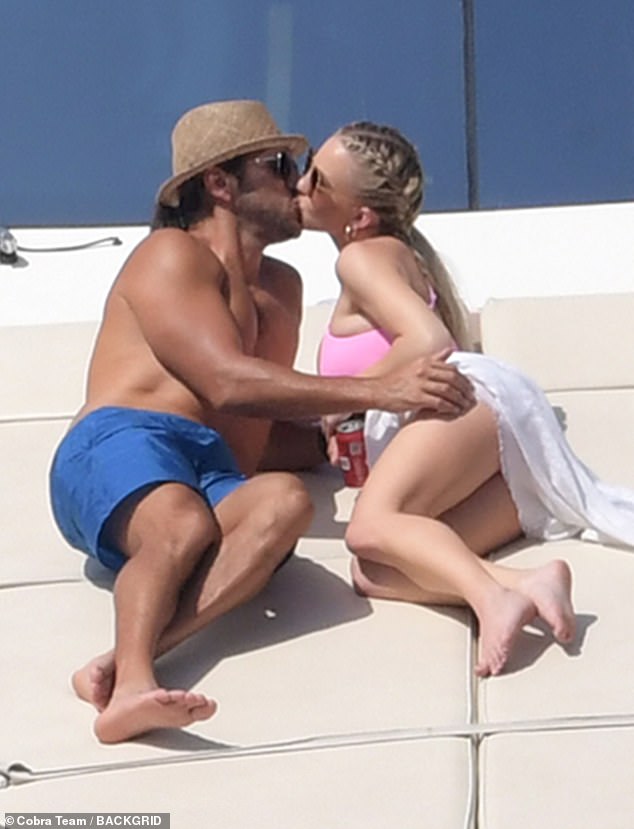 XOXO: The shirtless hunk tenderly touched her hip as they continued their love fest 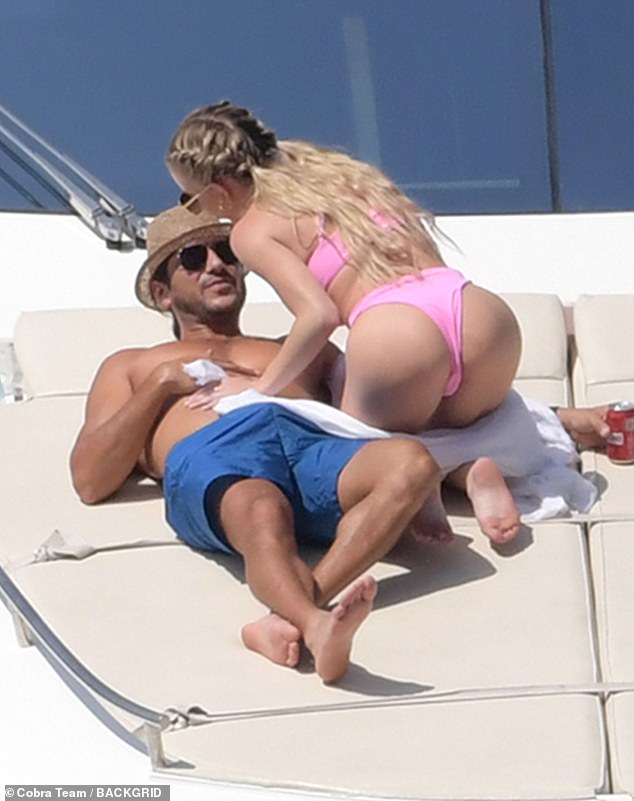 Cheeky! The Euphoria star put her bottom on display as she lavished love on her beau 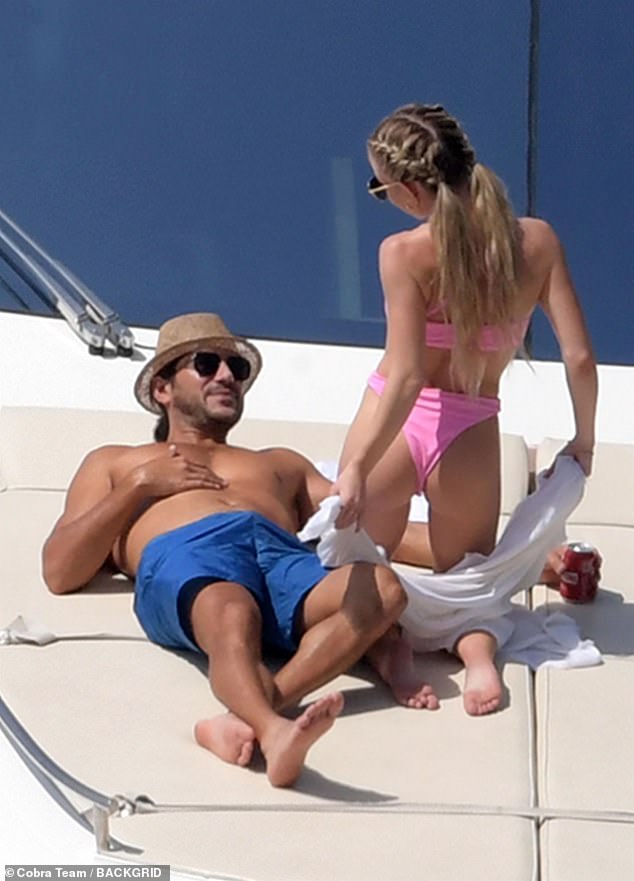 Bikini babe! Sweeney looked stunning with her blonde tresses styled into braids and a white sarong tied around her slender waist

After a day spent in the sunshine, the actress jumped into the refreshing water.

One pal cheered her on with a thumb’s up as she leapt off the boat.

Sydney has been documenting her Italian adventures on her Instagram account, where she posted a snap of herself luxuriously basking in the sunshine wearing a white bikini top and matching trousers.

‘Dolce vita,’ she captioned the snap.

Toned and terrific! The actress looked phenomenal with her gym-honed body on full display 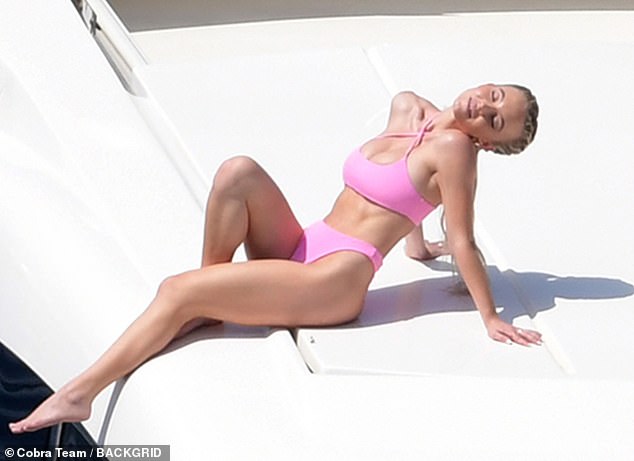 Strike a pose! The 23-year-old looked every inch the bathing beauty as she kicked back luxuriously at the edge of the boat, her head tilted beside her shoulder 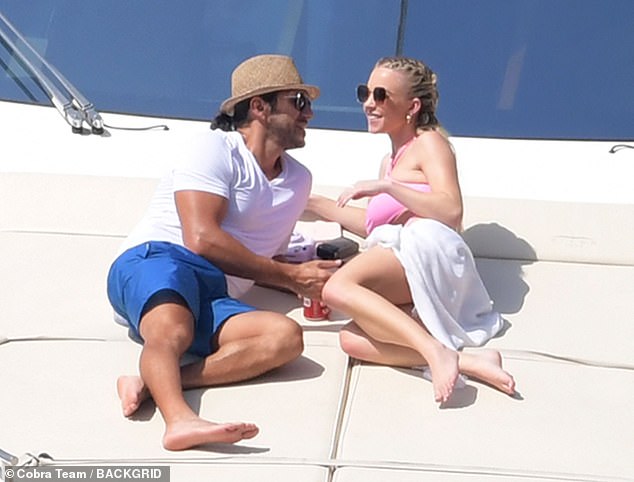 Fun in the sun! The actress beamed with joy whilst chatting with her long-time flame

And after a busy few years of work, Sydney definitely deserves some fun in the sun.

Sydney’s long list of credits include a role on the hit HBO series Euphoria, which sees star opposite the likes of Zendaya and Jacob Elordi.

She also stars on the newly released satire comedy-drama series The White Lotus, which debuted on HBO earlier this month.

Sydney plays college sophomore Olivia Mossbacher in the series which chronicles the various staff and guests staying at a Hawaiian resort over a single week. 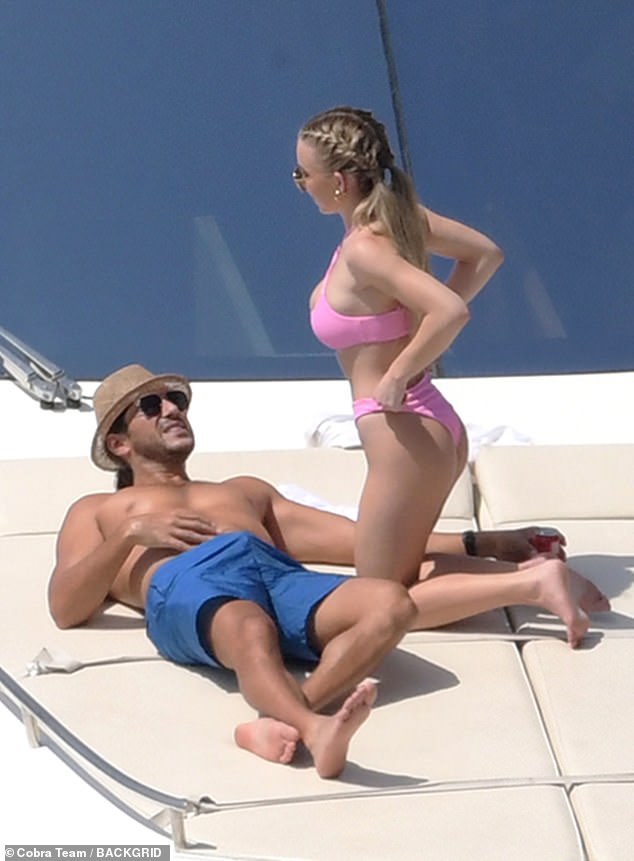 Throwing shade: The actress rocked a large pair of sunglasses, protecting her eye sight from the sun rays 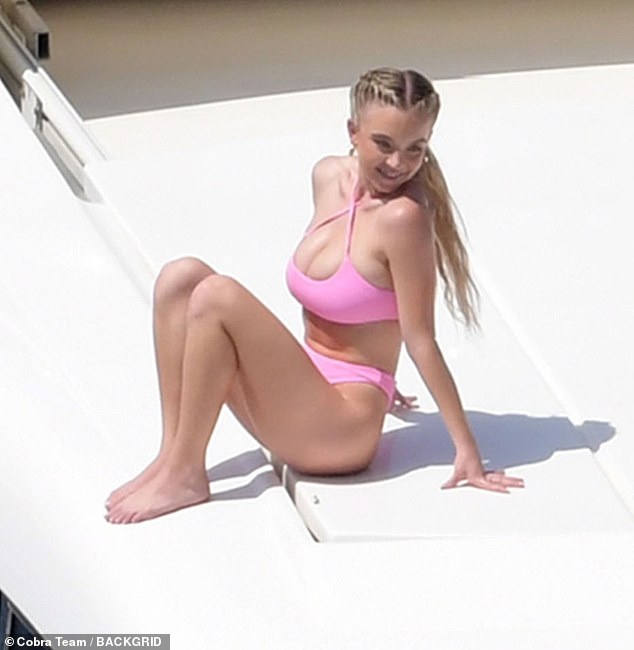 If you’ve got it! There was no denying just how incredible Sydney looked 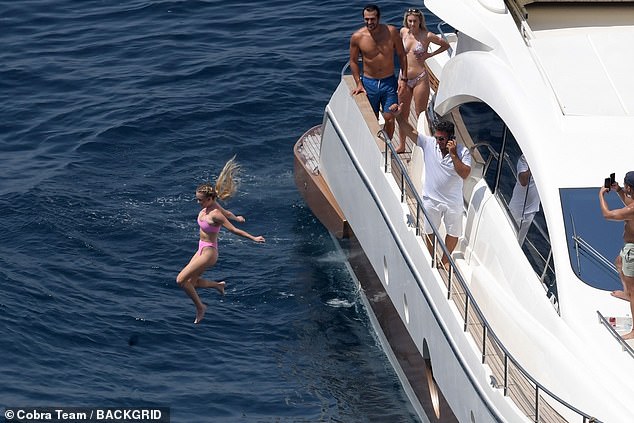 Making a splash! The actress leapt off the boat as one pal cheered her on with a thumb’s up

But she ended up going for it, and booked her role over a tape she submitted of herself.

‘What’s crazy—and this is going to sound really bad—is when I first got sent the audition, I was too nervous to go do it,’ she told StyleCaster.

‘I grew up in a smaller town with my family, who are a little more conservative, and I was like, “They’re going to kill me if I do something like this.” The audition got sent again to me. I read it again, and I was like, “This is so incredible. How could I pass an opportunity like this?” I’ll just really try to explain this to my mom one day. I put myself on tape. I didn’t even go in, and I ended up booking it off the tape.’ 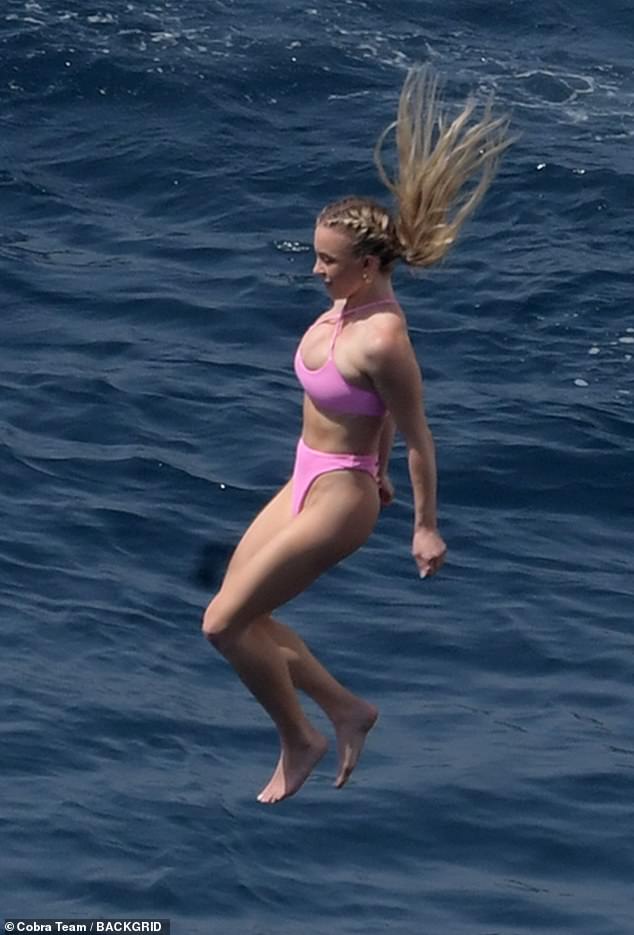 H20! The actress mixed in some adventure into her otherwise relaxing boat day 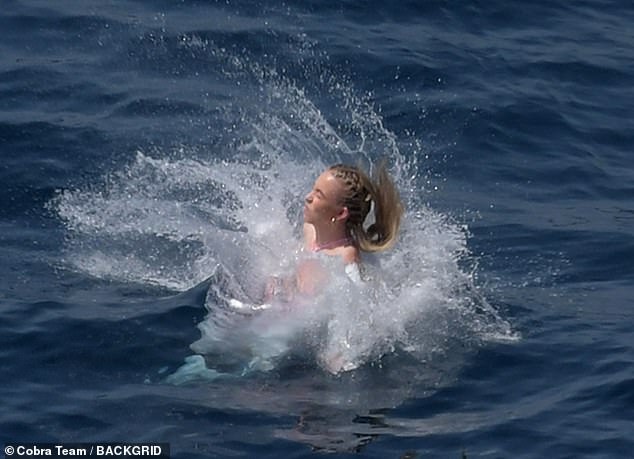 The time of her life! Sydney emerged from the water after splashing right in

Not only that, but Sydney had already booked a regular role in a straight-to-series Netflix show at the time she landed the Euphoria gig.

Euphoria was only a pilot at the time, and Sydney grappled with remaining on the Netflix show or going with Euphoria.

‘Do I go do a pilot for HBO on an incredible show but run the risk of not having a series? Or do I do a Netflix series that’s already picked up but my role is not as big?’ she told StyleCaster.

‘I had a personal conversation with [Euphoria creator] Sam Levinson, and he just told me his vision and everything about what he sees and wants to achieve in the show. There was no way I could not be a part of this, so I signed on and here we are.’ 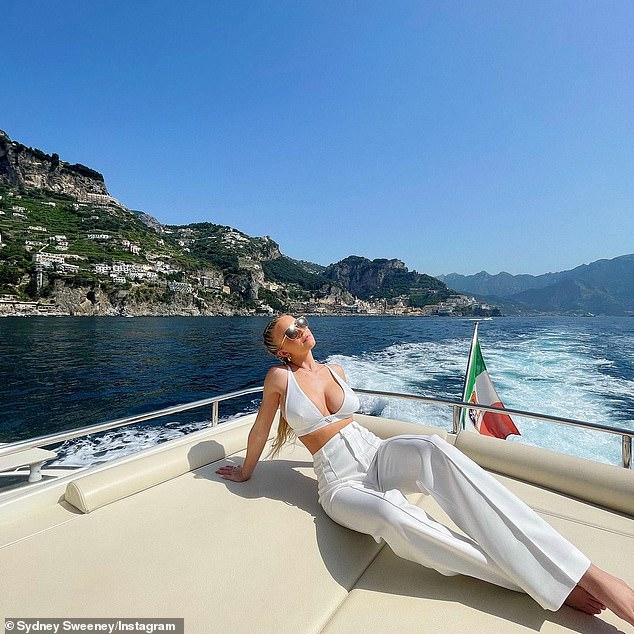 ‘Dolce vita’: The HBO star posed luxuriously in a white bikini top and matching trousers in this snap posted Thursday 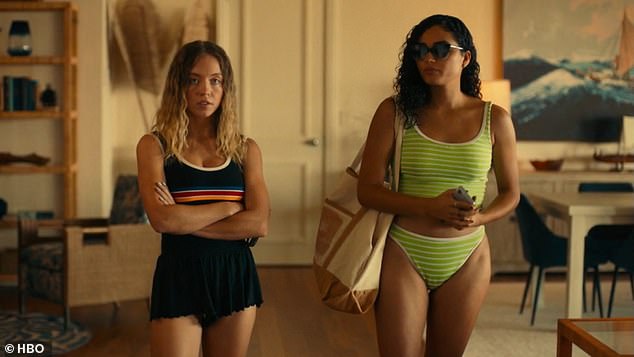 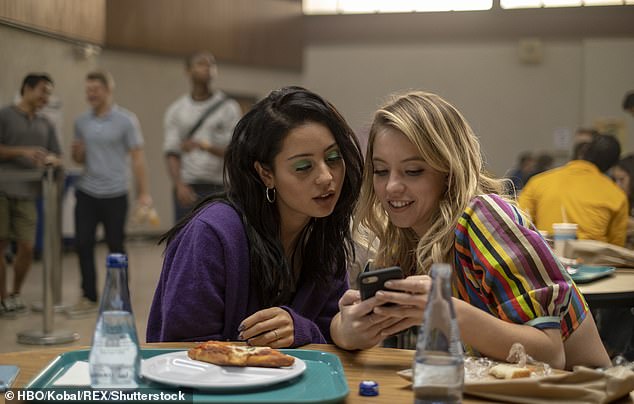 ‘I ended up booking it off the tape’: Sweeney recently admitted she almost didn’t audition for the controversial series Euphoria, fearing backlash from her family