‘I have not been fired’: The Goldbergs star Jeff Garlin speaks out on HR investigation into reports of inappropriate ‘verbal and physical conduct’ on set

Jeff Garlin is speaking out and denying claims that he behaved inappropriately on the set of his ABC comedy series The Goldbergs.

The 59-year-old standup comedian, who has been part of the main cast since the series premiered in 2019, claimed that he was still part of the series in a lengthy interview with Vanity Fair published Friday.

The actor also downplayed allegations that he told inappropriate language on set and defended himself as a ‘person who hugs’ after sources reportedly complained about being touched by him. 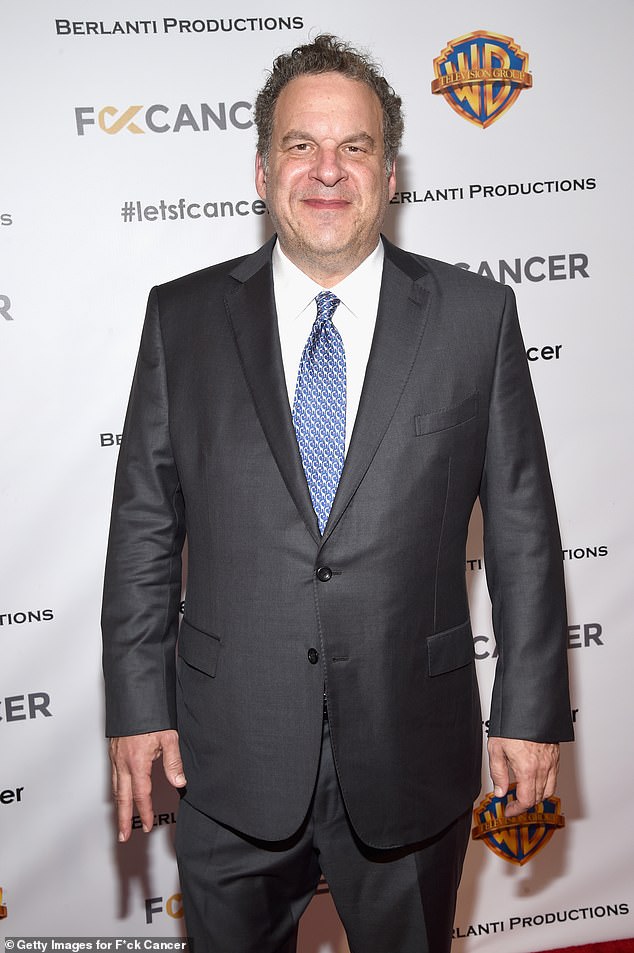 Pleading his case: Jeff Garlin, 59, denied claims that he had ‘engaged in a pattern of verbal and physical conduct on set that made people uncomfortable’ in an interview published Friday by Vanity Fair; seen in 2018 in Burbank, Calif.

Garlin, who plays the father on the family sitcom, was said to have ‘engaged in a pattern of verbal and physical conduct on set that made people uncomfortable’ from three people who formerly worked on the show.

One of the sources noted that they weren’t personally made uncomfortable by his behavior, though they other people thought it was ‘demeaning or unprofessional.’

The insiders claimed that some people on set were made uncomfortable by the actor touching or hugging them, though it’s unclear if any of the offended parties told him that they were uncomfortable.

‘He got away with it because he would call himself out for it — saying he was a big teddy bear, saying things like, “Oh you know me, just a big bowl of mush, I’m a hugger. I just love you,”‘ one source claimed.

In his interview, Garlin made it clear that he was still working on the series.

In a statement sent to People, a spokesperson for Sony Pictures Television wrote: ‘The well-being of our cast and crew is of utmost importance to us. This is an employment matter and it is being addressed by HR and production.’ 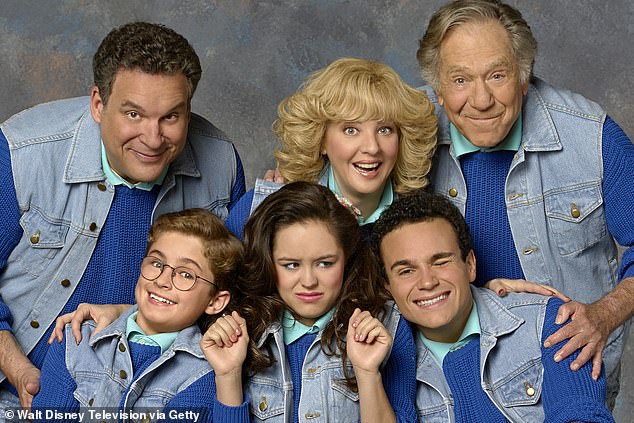 Still employed: Garlin stressed that he hadn’t been fired from ABC’s The Goldbergs and claimed that one complaint about him from a stand-in was over a joke ‘that was completely missed’; still from The Goldbergs 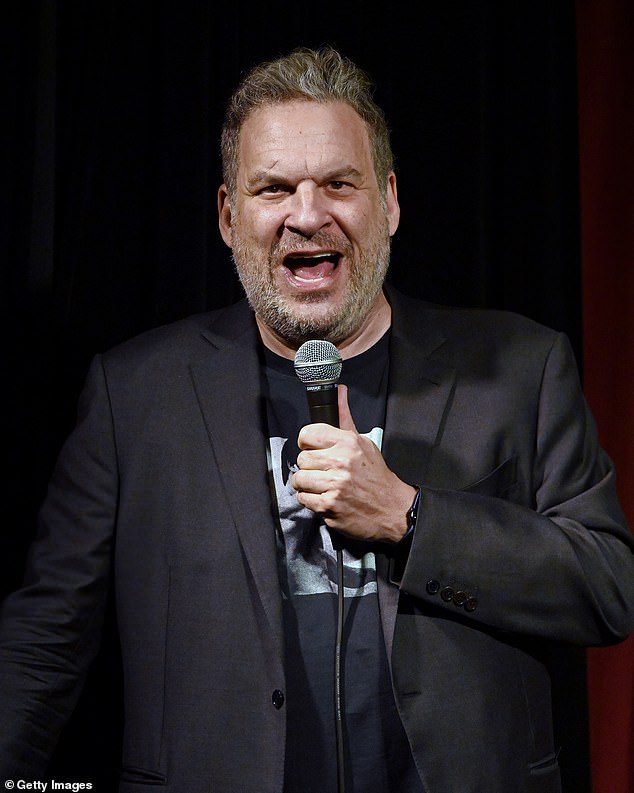 ‘I didn’t write those words’: The comedian denied that he ‘sent a text to a Goldbergs colleague saying that they should go to the next table-read wearing only panties; seen November 26 in Burbank, Calif.

After he was asked about an incident with a stand-in that was described as both ‘physical and verbal,’ Garlin denied that there was any physical component to the altercation.

‘And the verbal part was a joke that was completely missed,’ he continued, adding that he personally like the man and his wife, who were unnamed.

‘If someone misses a joke, that’s unfortunate to me. I don’t like it,’ he said, though he refused to disclose what the joke was, only calling it ‘silly’ and saying it was ‘misconstrued.’

The comedian, who is currently on a stand-up tour to aid comedy clubs harmed by the coronavirus pandemic, denied that he had ever ‘sent a text to a Goldbergs colleague saying that they should go to the next table-read wearing only panties.’

‘I didn’t write those words. And I’d like to see the text and who I sent it to,’ he replied. ‘But everything that I write like that is about joking. I am respectful of women and women’s bodies. And I don’t make jokes about that, because I don’t find it funny.’

Garlin claimed there was ‘no story’ behind the allegations, and suggested it was all a misunderstanding over his attempts to bolster his humor.

‘My opinion is, I have my process about how I’m funny, in terms of the scene and what I have to do. [Sony] feels that it makes for a quote “unsafe” workspace,’ he said.

‘I am always a kind and thoughtful person. I make mistakes, sure. But my comedy is about easing people’s pain,’ he continued. ‘Why would I ever want to cause pain in anybody for a laugh? That’s bullying. That’s just uncalled for.’ 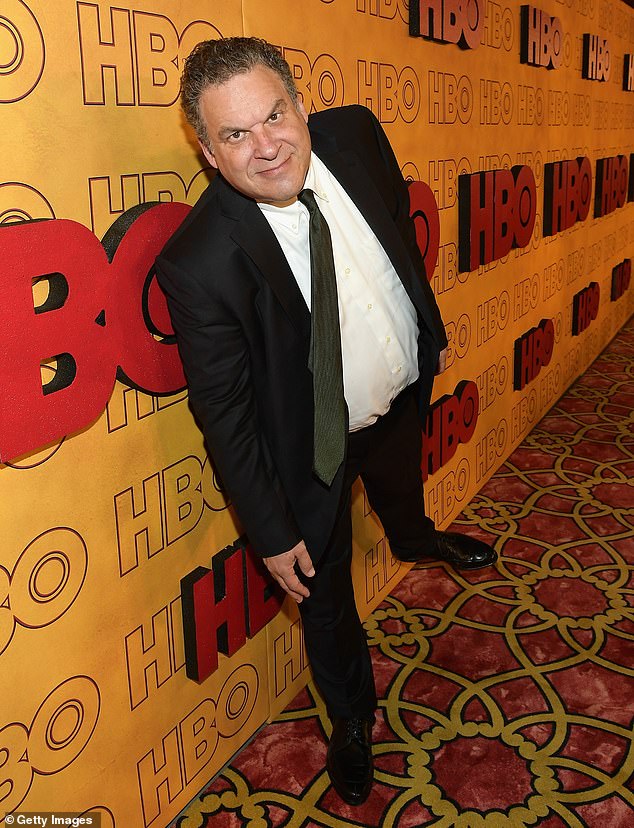 Part of the job? He claimed that complaints about his verbal conduct were just about him being ‘silly’ on set, which was necessary for his comedic process; pictured in 2017 in LA

Garlin continued, saying that ‘HR has come to me three years in a row for my behavior on set.’

He didn’t say what set off the investigations but claimed they were over ‘silly’ matters.

‘If I said something silly and offensive, and I’m working at an insurance company, I think it’s a different situation,’ the comic argued.

‘None of that goes on ever with me. That’s not who I am,’ he said, adding that there was ‘no big story’ unless it was framed around ‘political correctness.’

Garlin then denied any kind of physical misconduct and and said that anyone complaining about his verbal conduct on set ‘has it out for’ him.

As for the question of unwanted hugs, the Curb Your Enthusiasm star said people on set who never want to be hugged by him tell him that.

‘I am a person who hugs for sure. And it’s quick hugs, but I didn’t realize that anyone was feeling — so if you want to write that story, that’s a true story,’ he said. ‘It puts the onus on them to say something, and I would gladly respect anyone who said, “Please don’t hug me. I don’t feel comfortable.”‘ 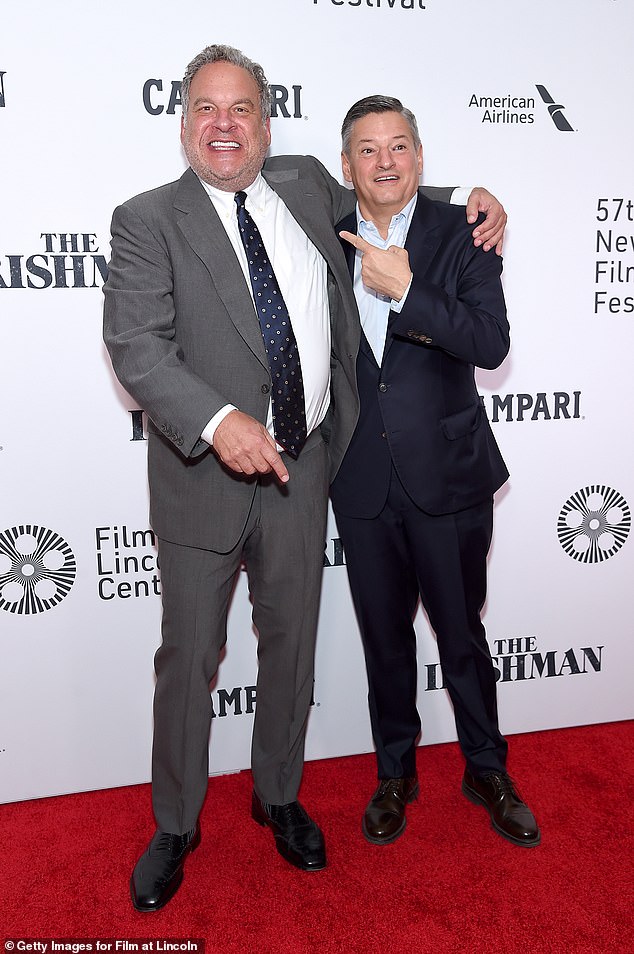 Touchy feely: Garlin admitted he’s a ‘person who hugs for sure’ after he was confronted with complaints, but said he wished offended people would have told him or a producer before HR; seen in 2019 in NYC with Netflix COO Ted Sarandos

However, he said that ‘HR has never said a word to me about hugs.’

Garlin did agree that hugging that made someone uncomfortable would be ‘wrong.’

In response to a question about Garlin allegedly ‘saying things on set that make people feel uncomfortable and demeaned,’ he claimed it was just his ‘silliness on set’ and said he thought it was acceptable behavior in the workplace, while again saying he wished the offended parties had told him or one of the producers about their concerns before bringing the matter up with HR.

Although he again reiterated that he had not been fired, he indicated that negotiations were ongoing about his future with the series.

‘We’re trying to come to a place where we come to an agreement,’ he said. ‘Either I can behave the way [they want] or not. We’ll see, but I’m not being fired and I’ve not been fired.’

He also said he would ‘not be doing any of my silly stuff or anything, out of respect,’ when he returned to work.

Garlin wound down the interview by claiming he almost hadn’t returned for the ninth season because he was ‘bored’ by filming on it, and he suggested the series might not even be renewed for a tenth season. 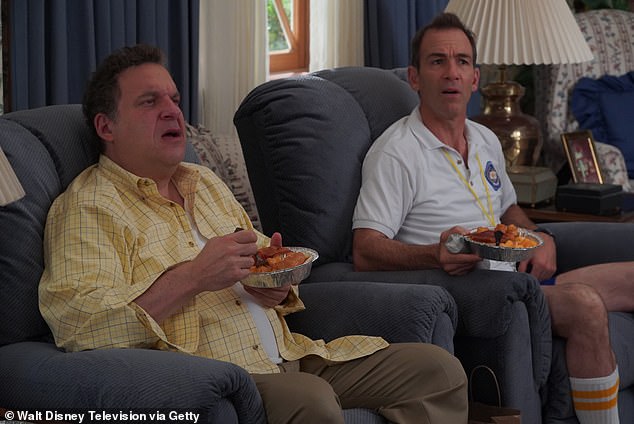 Tired of it: Garlin said he almost left before filming the ninth season because he was ‘bored’ with The Goldbergs and suggested it might not be renewed for a tenth season; still from The Goldbergs