This Morning’s Phillip Schofield and Rochelle Humes struggled to contain their laughter on Wednesday after a technical blunder left Hollywood star Kiefer Sutherland on-screen well after his interview had finished.

The legendary actor and musician, 55, spoke to the hosts remotely from his Los Angeles home while discussing the inspiration behind his latest musical endeavour – newly released third album Bloor Street.

But an unfortunate Zoom delay left a bemused Kiefer hovering awkwardly in front of his laptop while an oblivious Phillip, 59, and Rochelle, 32, carried on with the rest of the show.

Finishing the interview, a visibly impressed Rochelle said: ‘It was one of those ones were you were hoping he would be as nice as you imaged he would be’ 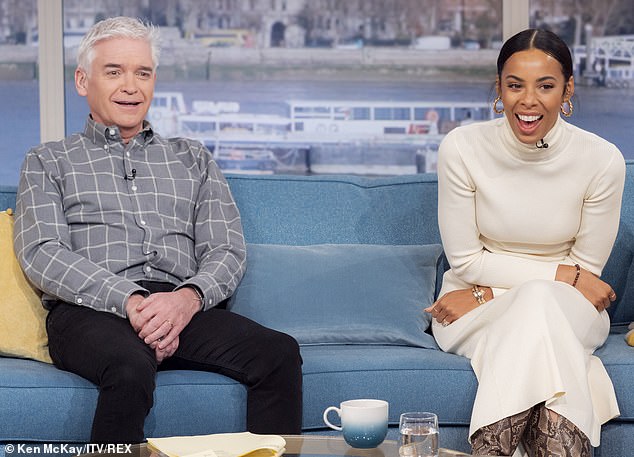 Nodding affirmatively, Phillip added: ‘I knew he would be.’

However the hapless pair were left red-faced after realising he was still watching, albeit not through choice, while waiting for his ITV Zoom connection to be cut.

The son of Hollywood greats Donald Sutherland and Shirley Douglas was seen grinning uncertainly as they praised him without realising he was looking on.

‘He’s still there!’ Phillip roared, holding his face in his palms while Rochelle struggled to contain her laughter.

The actor was then cut off before the presenters had a chance to apologise, with the show swiftly moving to a commercial break. 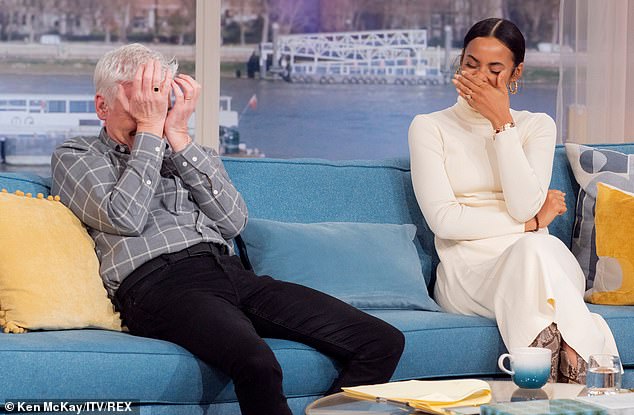 Crying with laughter: The Presenters realised they had been speaking about guest Kiefer Sutherland while he was still on the video call

Speaking live on This Morning from his LA home, Kiefer admitted his love of music isn’t actually a new thing.

He said, ‘I started playing guitar when I was ten years old and I’ve been making records for the last ten years.’

‘This is our third album and I’ve been touring a lot – I’ve spent a lot of time touring around the UK. I’m supposed to be there right now, but unfortunately this pandemic will not go away, but we’ll get there as soon as possible.’

Kiefer was left feeling “grateful” for what he has in his life during the COVID-19 pandemic.

The 55-year-old actor and musician used the lockdowns to take control of his life and career. He has never felt luckier to have his model fiancee Cindy Vela and his daughter Sarah, his child from his first marriage to Camelia Kath, than during the past two years. Interview: Kiefer, 55, was on ITV’s This Morning on Wednesday to discuss his move into the music industry

Usual This Morning host Holly Willoughby is currently filming with comedian Lee Mack for a BBC special, leaving Rochelle to stand in.

Holly’s co-host Phillip Schofield was quick to explain last week that Holly, 40, will be missing for two weeks as she films Wim ‘Iceman’ Hof’s Superstar Survival with Lee Mack.

Although Holly won’t be back on the This Morning sofa until February, she will fly in from Southern Europe – where Superstar Survival is filmed – every weekend to present Dancing On Ice alongside Phillip. 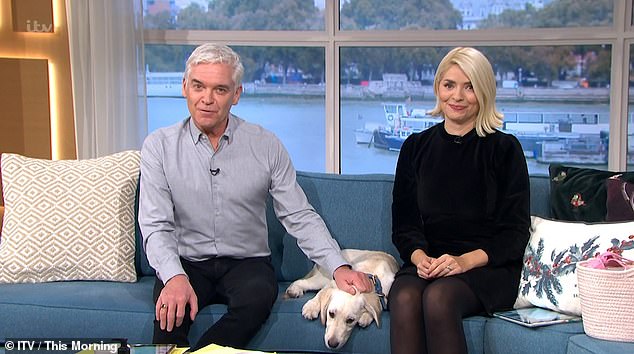 Filling in: Rochelle Humes has been filling in for This Morning presenter Holly Willoughby (right) who is currently filming with comedian Lee Mack for a BBC special

Rochelle explained: ‘I’ve come here to hang out and keep her seat warm’ as Phillip, 59, revealed the Saturdays star will fill in for Holly for the entire fortnight.

‘Very busy show for you today. Rochelle is here, as you can see, keeping Holly’s seat warm,’ explained Phillip.

The Saturday’s singer showcased her incredible style in a long white dress and knee-high snakeskin boots on Wednesday.

She shared the picture with her 2.2 million Instagram followers and captioned it: ‘On Wednesday’s we wear white @thismorning’ 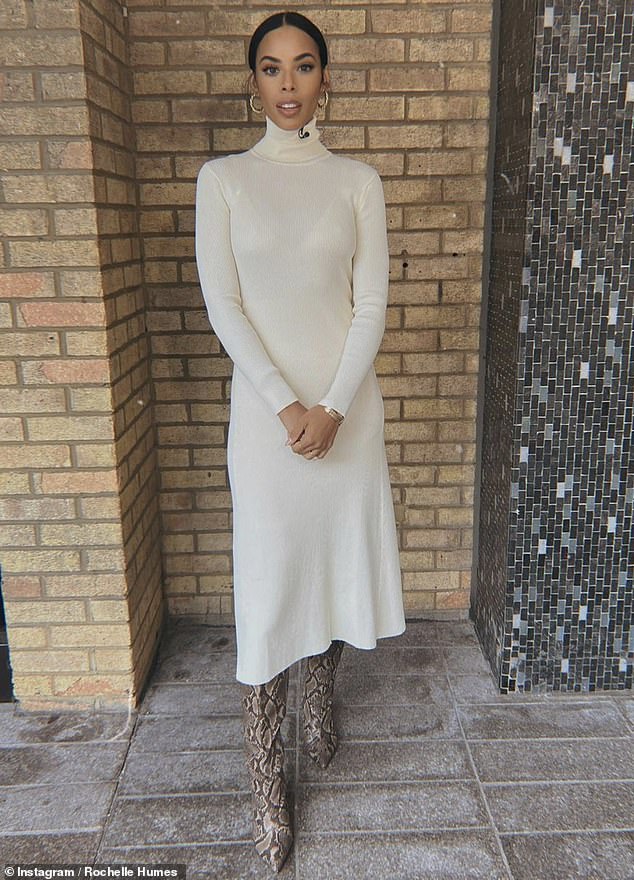