‘What has Tom Cruise done to his face?’ Top Gun star, 59, sparks speculation he’s had FILLERS… as Twitter reacts to changing appearance at LA Dodgers game

At 59, he is one of Hollywood’s most enduring A-list action heroes.

But on Saturday night, Tom Cruise appeared almost unrecognizable to some fans, as he enjoyed Game 2 of the National League Division Series in San Francisco.

Sitting with his son Connor Cruise and smiling for pictures, many later took to social media to debate the Top Gun star’s changing looks. 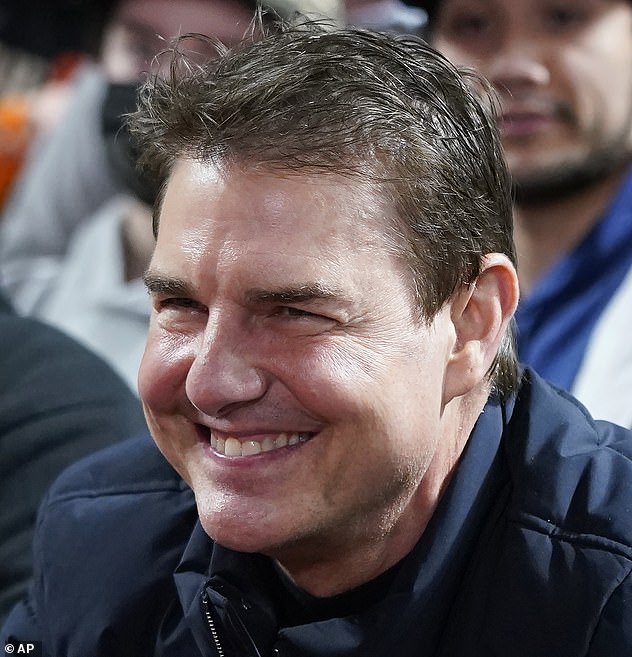 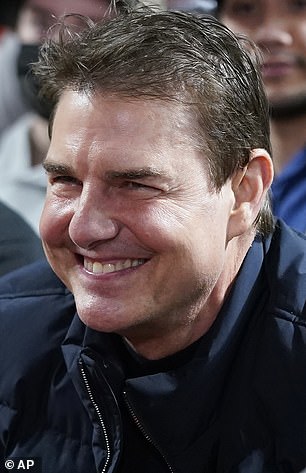 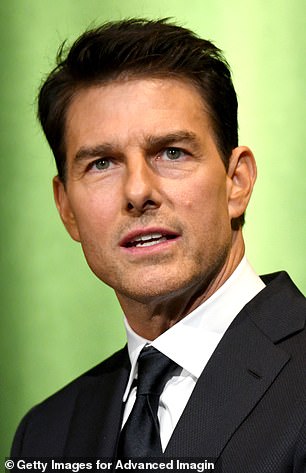 Now and then: Cruise (left) at the baseball game on Saturday, and then right  at a 2019 event in Burbank, California

Cruise was enjoying a night out at Oracle Park to watch the San Francisco Giants play the Los Angeles Dodgers with his son Connor, 26, by his side.

While many Twitter users genuinely appeared skeptical that it was indeed Cruise at the game, others likened his appearance to Canadian stand-up Norm Macdonald, the former SNL star who passed away last month.

Others speculated as to how the actor’s face had changed.

‘Tom Cruise has either gained weight, or he has a face full of fillers. I’m going with the fillers,’ one person wrote. 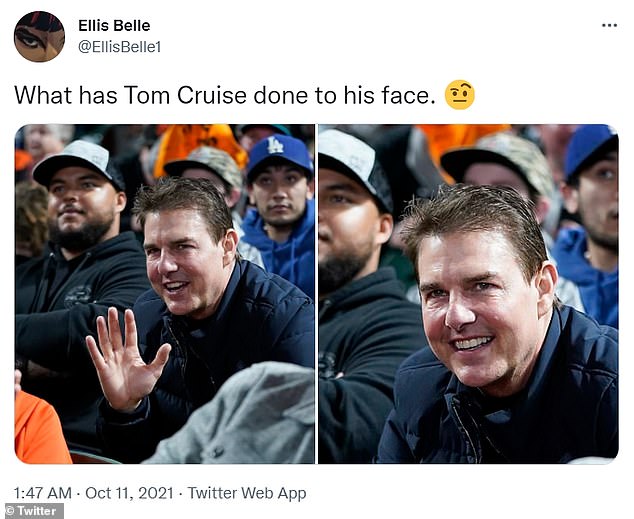 Raising eyebrows… and questions: Twitter reacted over the weekend as many fans wanted to know what Tom Cruise had done to make himself look different 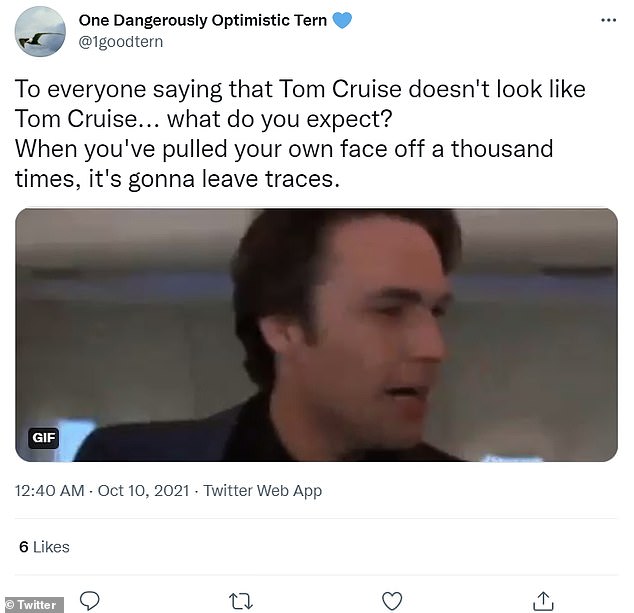 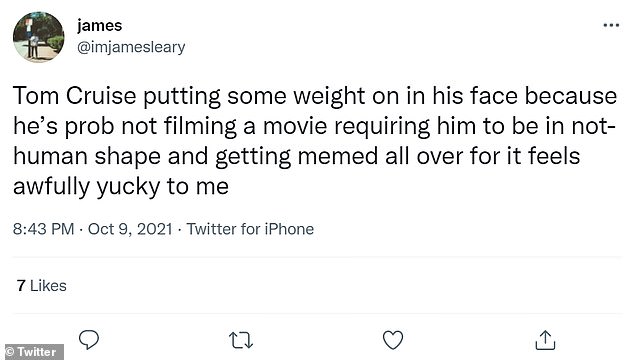 Defending the star: Another user pointed out this changing appearance could be down to having a break from his grueling filming schedule 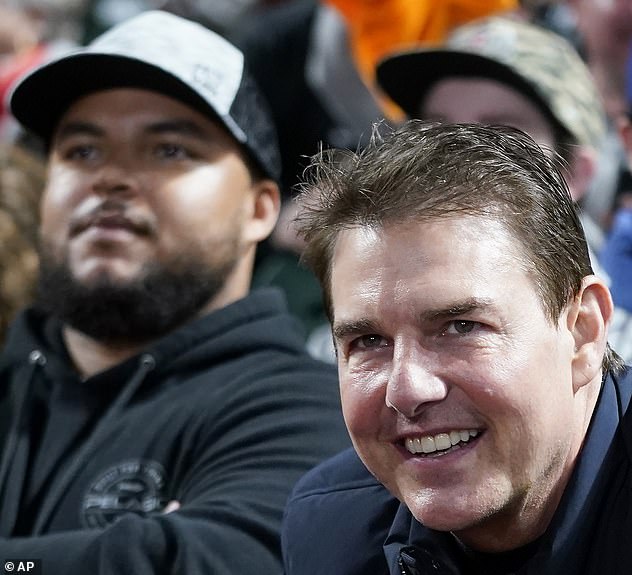 Night out: Cruise was enjoying a night out at Oracle Park to watch the San Francisco Giants play the Los Angeles Dodgers with his son Connor, 26, by his side (pictured, left)

Another simply asked: ‘What has Tom Cruise done to his face?’

However, some leaped to his defense, with a fan arguing: ‘Tom Cruise putting some weight on in his face because he’s prob not filming a movie requiring him to be in not-human shape and getting memed all over for it feels awfully yucky to me.’

Another Twitter user wrote: ‘At first I felt a little bad that everyone was making fun of Tom Cruise’s face because it honestly looks like some sort of side effect to me.’ 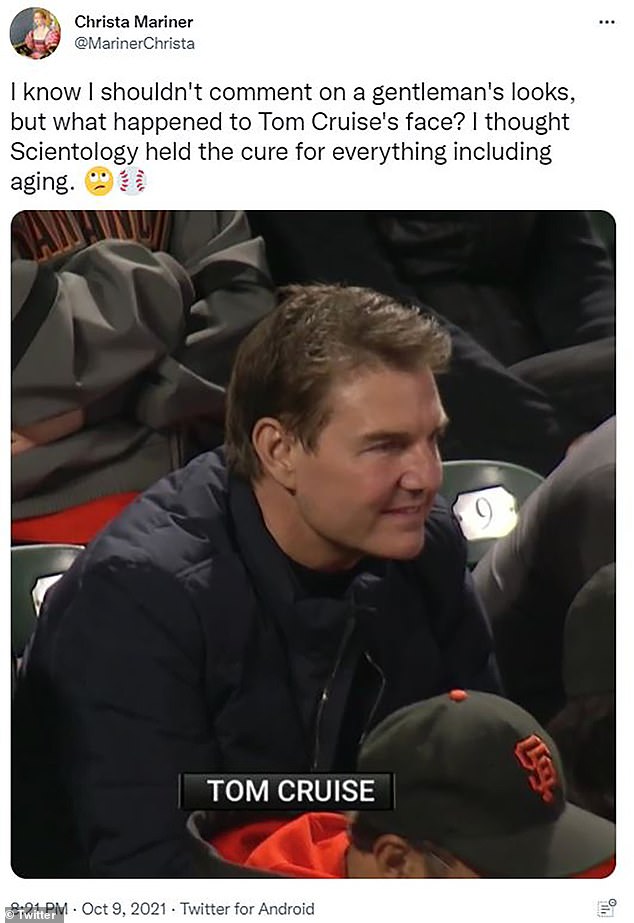 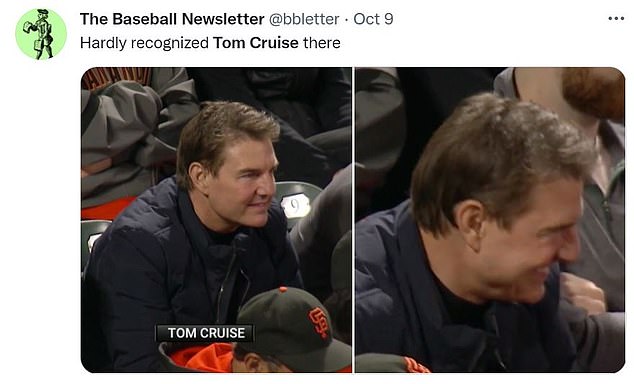 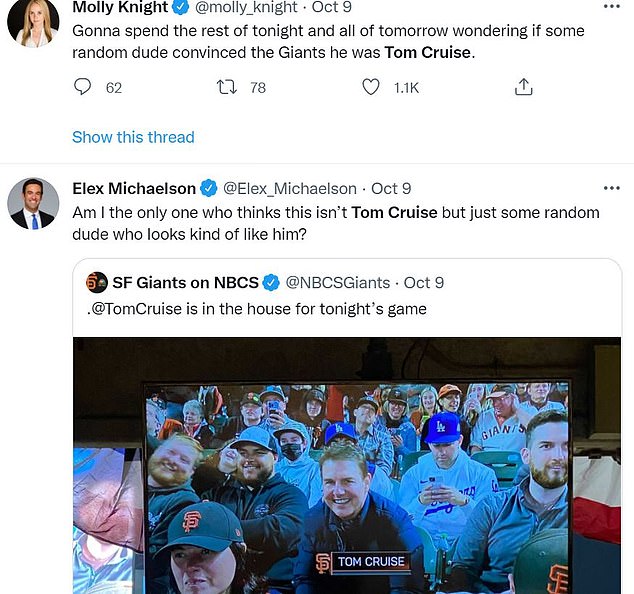 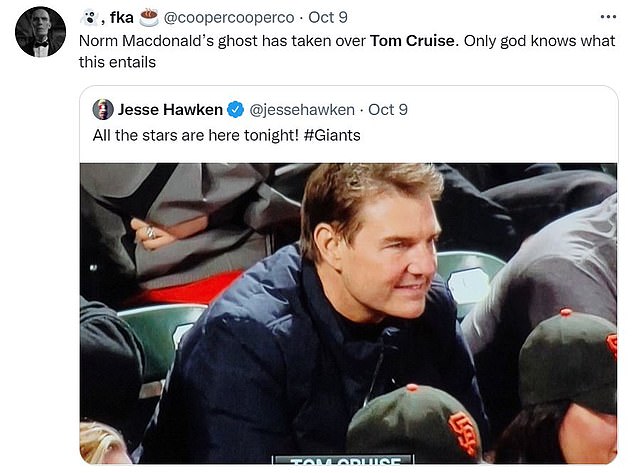 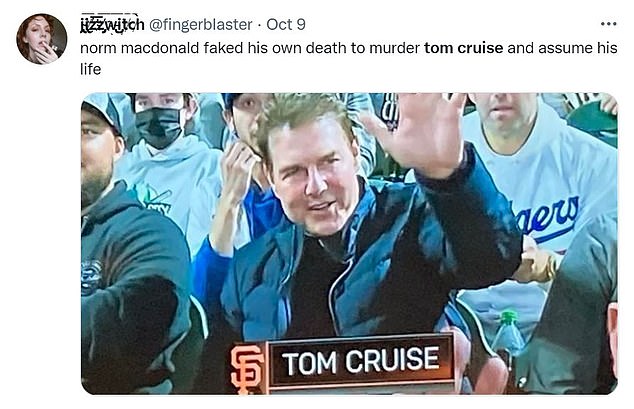 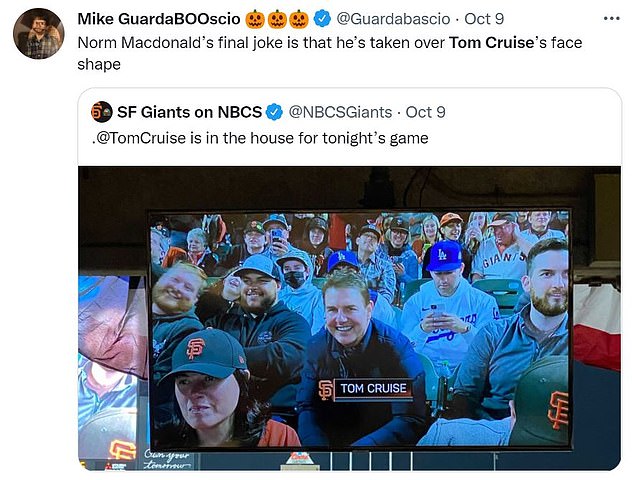 They added: ‘But then I remembered he’s spent decades criticizing people for taking meds. Drag that pillow face.’

The last tweet was in reference to Cruise’s comments about Brooke Shields.

Cruise previously suggested that the Church is against psychiatric drugs, having got into a public spat with Shields in 2005 over her use of antidepressants to battle postpartum depression. 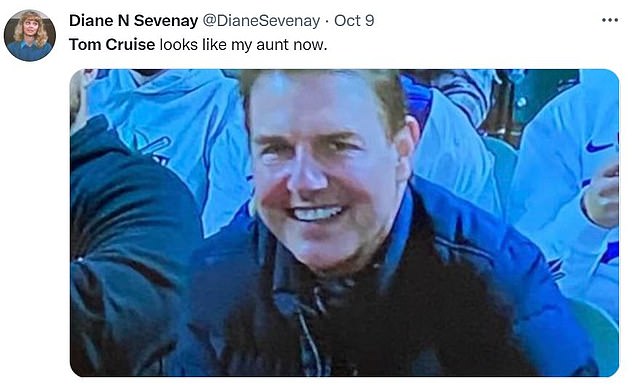 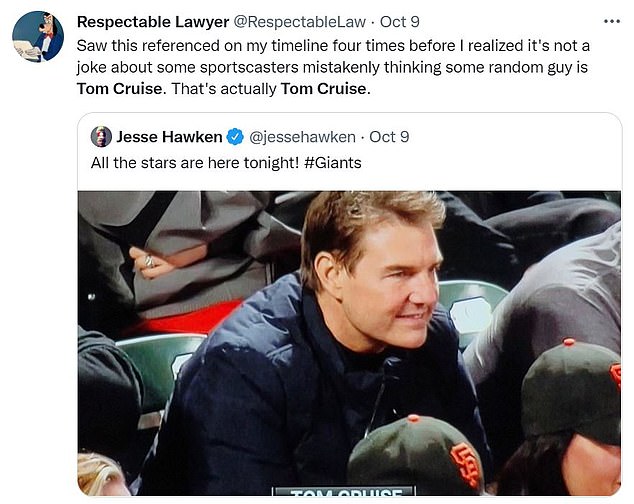 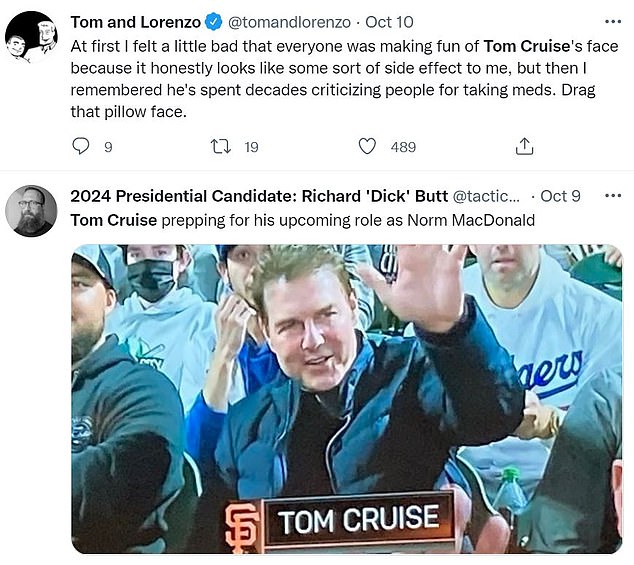 Speculate: Many fans took to social media to question whether or not the star has gone under the knife

But Shields hit back at Cruise after he called her actions ‘irresponsible.’

‘Tom should stick to saving the world from aliens and let women who are experiencing postpartum depression decide what treatment options are best for them,’ Shields said at the time.

The actress revealed that a year later, Cruise came over to her house to apologize.

‘I was so impressed with how heartfelt it was,’ she told Jay Leno in 2006. ‘And I didn’t feel at any time that I had to defend myself, nor did I feel that he was trying to convince me of anything other than the fact that he was deeply sorry. And I accepted it.’