Victoria Beckham gave an insight into her beauty regime as she created a ‘wintery’ eyeliner look for an evening out in London on Saturday.

Taking to her Instagram, the pop star turned fashion designer, 48, opted for a casual outfit and sported a hat and polo neck jumper ahead of her night out.

As she applied her eyeliner, she said she was using a product from her own range, Satin Kajal Liner in Bronze, around both the outside of her eye and her waterline. 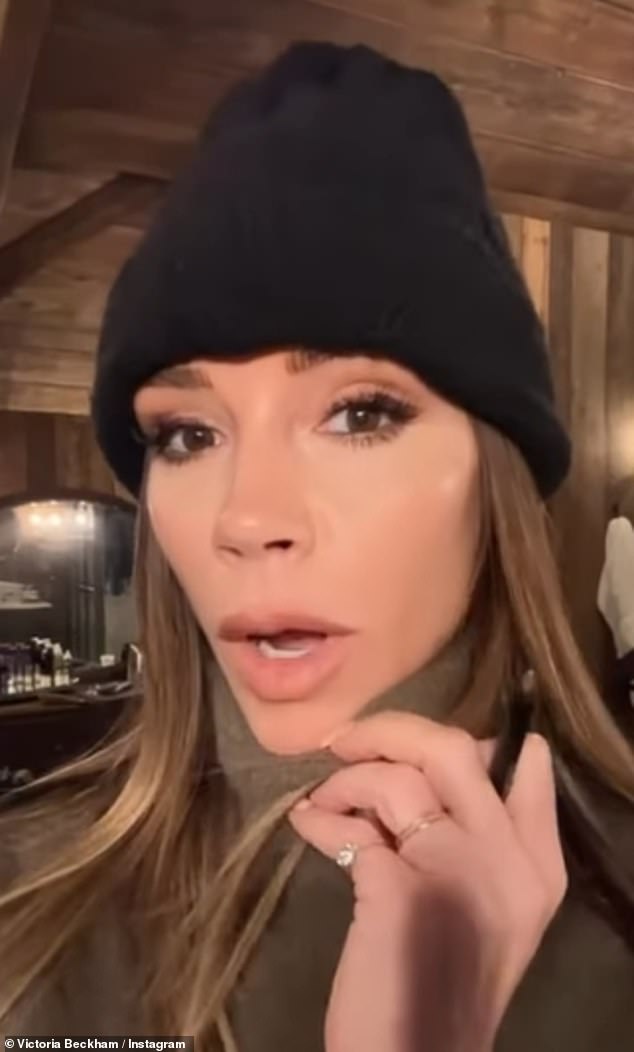 Getting ready: Victoria Beckham used products from her own makeup line to create a ‘wintry look’ for an evening out in London on Saturday

Something different: She captioned the post: ‘A cosy night out elevated with my Satin Kajal Liner in Bronze… The perfect update to your smoky eye! Kisses x VB’

‘But I love how this is not as strong as the black, not as hard as the cocoa but the bronze is such a nice colour.

‘Slightly softer, but a little bit more than what I would normally go for.’

She captioned the post: ‘A cosy night out elevated with my Satin Kajal Liner in Bronze… The perfect update to your smoky eye! Kisses x VB’ 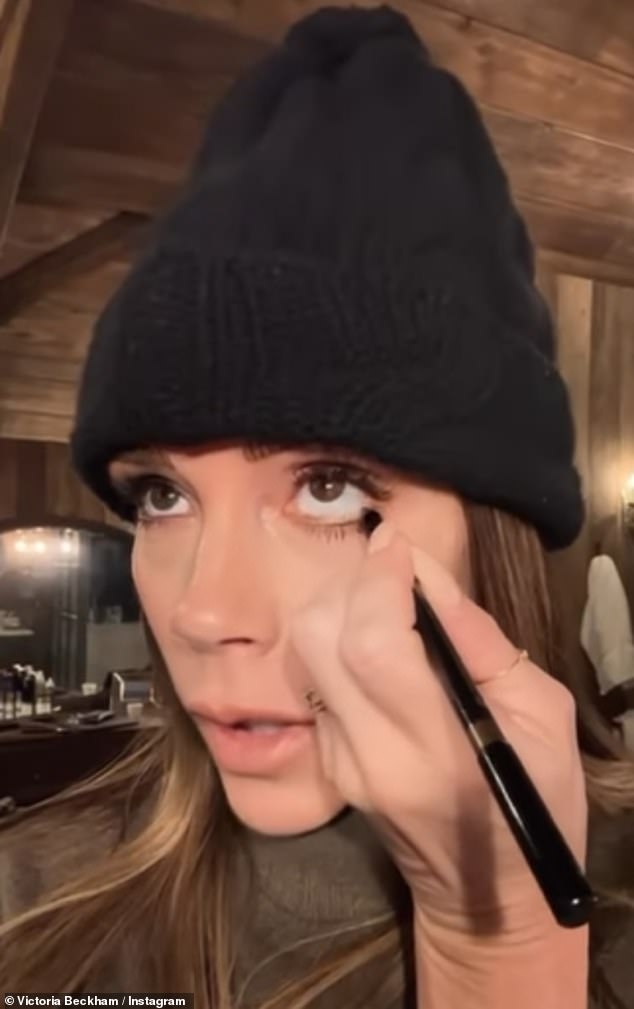 Wintry night out: Taking to her Instagram, the popstar turned fashion designer, 48, revealed that she was opting for a casual outfit, sporting a hat and polo neck jumper

It comes after she came under fire on Friday for being out of touch as she took to Instagram again to promote an £800 cardigan from her fashion line.

Victoria shared a video of herself modelling the VB Body Longline Jacket with skin-tight leggings, telling her followers how the simple item is ‘so easy to wear’.

She captioned the video of herself on her main grid: ‘#VBBody makes dressing easy! I’m obsessed with this new longline jacket.

‘The compact knit fabric is super sculpting and I love the seaming details. Available now at VictoriaBeckham.com and at 36 Dover Street! Kisses x VB.’

Sharing the mirror-selfie clip to her story, the former Spice Girl also included a link to purchase the item, which retails at £790. 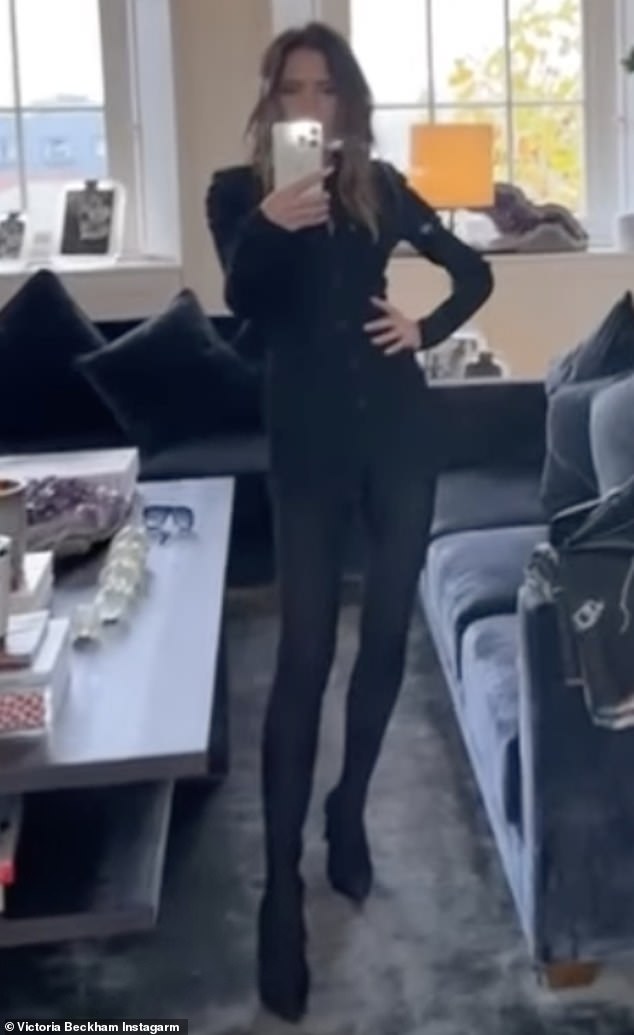 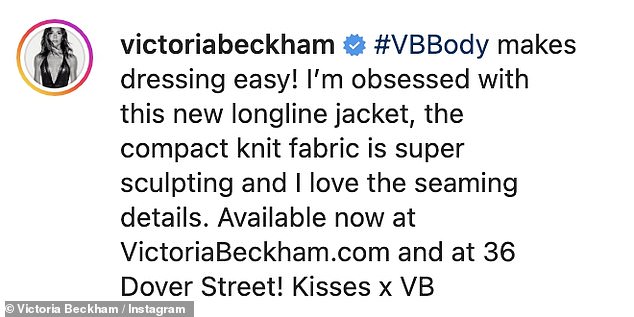 ‘Keep it real!’ Victoria Beckham, 48, came under fire for being out of touch as she promoted an £800 cardigan from her fashion line, on Friday And although some fans were impressed with the design, many followers criticized her for promoting something so expensive while people are ‘struggling with bills.’

Out of touch: And although some fans were impressed with the design, many followers criticized her for promoting something so expensive while people are ‘struggling with bills.’

The budding chef gave his spin on a traditional roast dinner on Wednesday, whipping up aged beef that looked underdone with a side of carrots and potatoes.

Yet the TV personality was widely mocked over the Instagram video, with fans claiming the beef looked raw and that too much butter had been used to prepare the vegetables.

Fans were also left questioning how much the meal would have cost to prepare and whether the average person could afford to replicate it.

Butchers told MailOnline that the meat appeared to be a five kilo cut of 28 day dry aged sirloin which would be worth between £200 and £300 at a meat market. 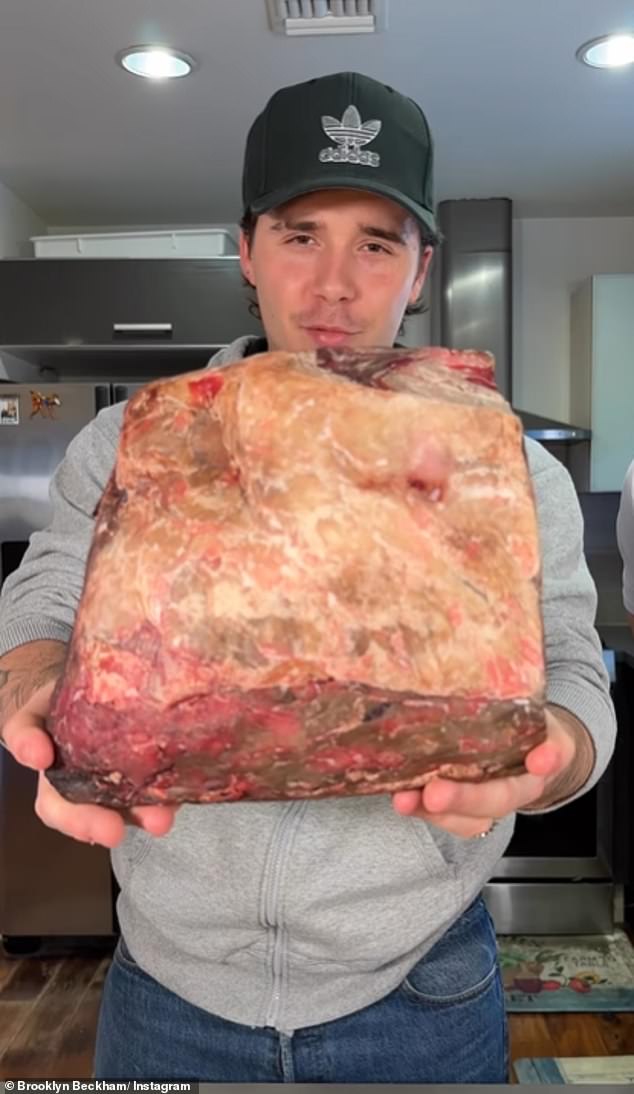 A raw deal? It comes after her son Brooklyn ‘splashed out £300’ on his ‘underdone’ beef roast with fans blasting the budding chef for ‘spending more on one meal than families do in a week’

Brooklyn also used copious amounts of butter, which is currently at a sky high price due to a global milk shortage.

Despite backlash over the meal, Brooklyn received praise from his mother Victoria, who said she’d be using the recipe as ‘inspiration’ for the next meal she makes her family.

Sharing Brooklyn’s video on Instagram, the designer penned: ‘Inspiration for Sunday’s roast. I’ll be attempting this for your dad and brothers and sister!’

Hitting back at fan criticism, she then pointedly added: ‘It’s rare people not raw’.

It’s unlikely the meal will ever pass Victoria’s lips, however, as she famously sticks to a diet of mainly grilled fish and vegetables.

Despite her strict eating habits, Victoria still allows herself the odd vice, whether it be tequila, or a glass of fine wine. Yet it’s unclear if she’d be comfortable consuming Brooklyn’s high calorie meal as she insists on sticking to ‘healthy fats’. 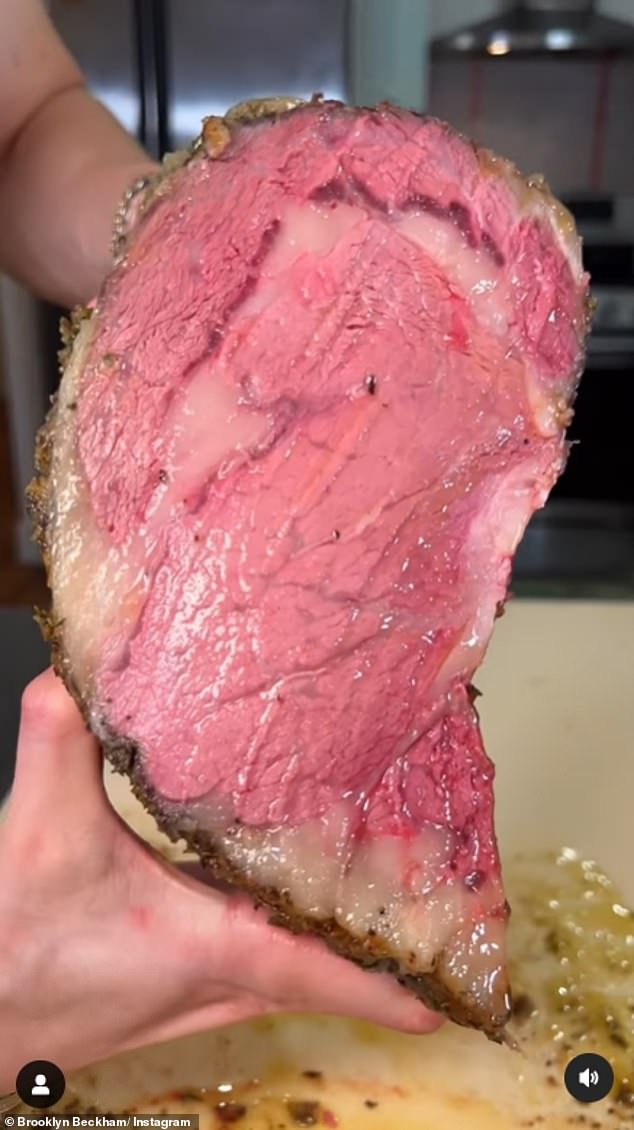 Ready to moo: Brooklyn’s fans were convinced the beef was undone after he cut into the joint and showed off the finished product