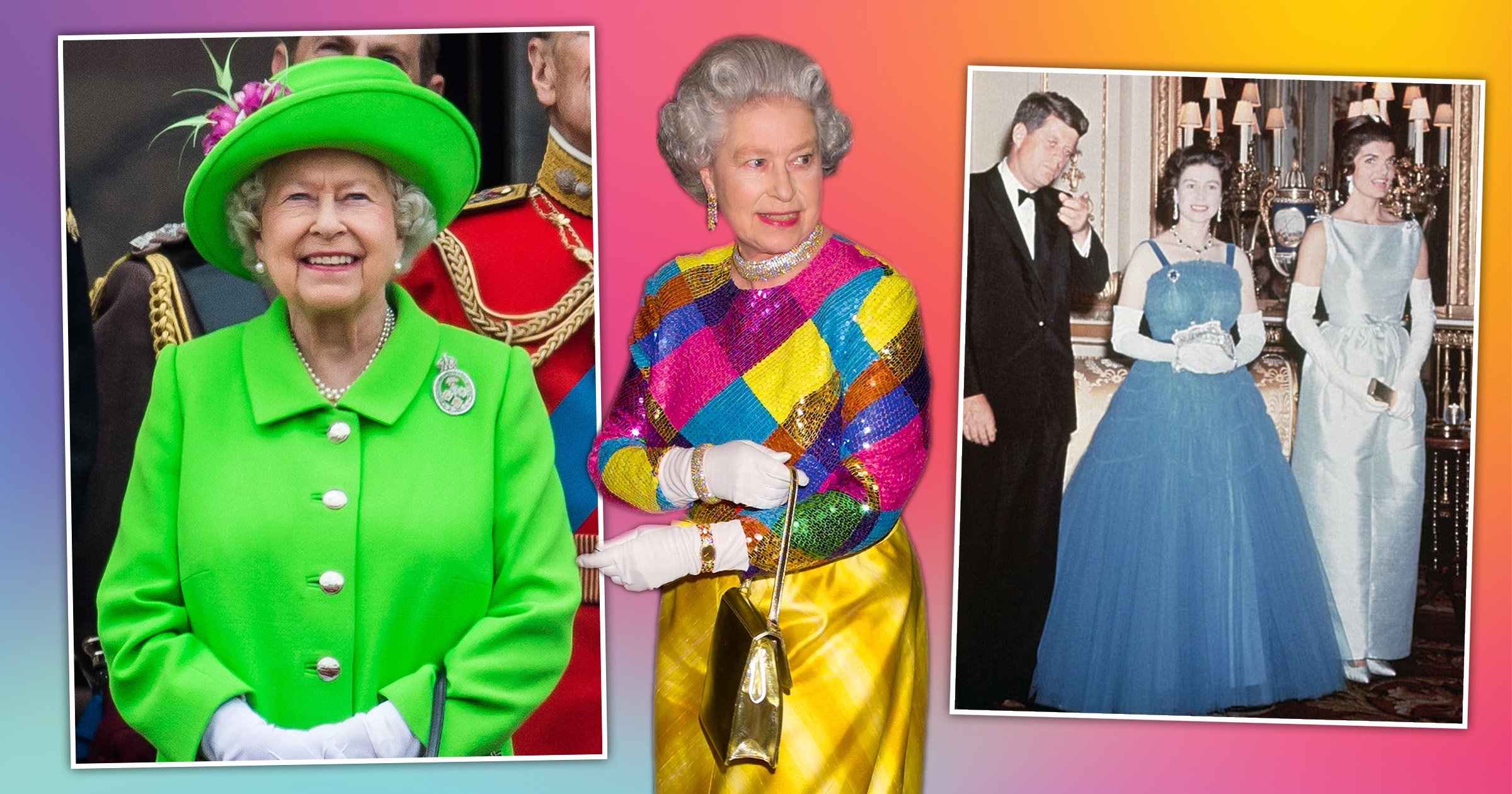 Throughout her long reign, the Queen’s carefully crafted looks offered a masterclass in the art and meaning of style.

Vogue declared the late monarch as ‘never getting it wrong. Ever… Never… overdressed, underdressed or otherwise just wrongly dressed… Faultless.’

With a daytime look as familiar as that of one of your own family, she was unflashy yet easy to spot in a crowd. That was a must for the monarch (who was 5ft 4in at the time of her coronation) because, in her words, ‘I have to be seen to be believed’.

And see her we did. On a crowded walkabout, in rooms full of muted suited men, she stood out. In block colours: crayon bright yellows, pinks, reds, blues or greens. Understated yet commanding in a plain knee-length coat layered over a dress in the same hue or a coordinating floral pattern.

Neutral accessories: a Launer framed handbag usually hung from her left wrist, alongside gloves and block-heeled shoes (Kensington cobblers Anello & Davide have been making the low-heeled court shoes she often wore for more than 50 years). A brooch on her left lapel and strands of pearls around her neck were her daily decorations.

Hats were common too, with brims small enough to see and be seen – and compact enough to be manoeuvred in and out of a car without removal or adjusting. It was a style her former dressmaker, Sir Norman Hartnell, declared ‘a non-sensational elegance’.

While the Chinese silk for her 1947 wedding dress was famously bought with her wartime clothing ration allowance (plus 200 coupons gifted to her by the UK government), it reportedly took 350 women seven weeks to embroider 10,000 imported American seed pearls into flowers.

But Elizabeth II was always meticulous with her outfits and each piece she wore had been customised. Sometimes needing to change five times a day, she favoured items with zips so they would be easy to slip on and off.

Hemlines were weighted to prevent wardrobe malfunctions in windy conditions, fabrics were tested for their ability to withstand wrinkling and creasing for travel, and beaded gowns had extra lining sewn into the seat to avoid discomfort when sitting.

Vitally, they were occasion-appropriate too. There were Balmoral tartans in Scotland, headscarves at horse shows and, recently, see-through umbrellas. Trousers were worn, but rarely.

‘The Queen and Queen Mother do not want to be fashion setters,’ Hartnell once said. ‘That’s left to other people with less important work to do.’

Elizabeth II had a keen interest in fabrics and collected and stored them over the years for future use. The golden dress worn at the Diamond Jubilee Concert in 2012 was made from fabric bought in 1961, and her collection includes fabrics bought before her coronation.

She was advised by and worked with Angela Kelly, who joined the royal household in 1994 as one of her dressers. Ms Kelly apparently sold her washing machine to buy a smart outfit for her interview, and became ‘personal assistant, adviser and curator to Her Majesty the Queen (jewellery, insignias and wardrobe)’.

Ms Kelly began designing some of Elizabeth II’s outfits in 2001 (including the yellow confection worn at William and Kate’s wedding in 2011 and the royal christening gown used by the Queen’s grandchildren since 2004). She was also tasked with wearing in the monarch’s shoes because both were a size four.

In her 2019 book, Kelly revealed the Queen was thrifty with her clothing and loved a bargain: ‘She liked her clothes to be adapted and recycled as much as possible… Typically the lifespan of an outfit could be around 25 years.’ Indeed, on her Diamond Jubilee, Barbour offered a new wax jacket but she replied that she’d prefer her old one back – it had been in service for more than 25 years.

There was also meaning in her choices. As Bethan Holt notes in The Queen: 70 Years Of Majestic Style, Elizabeth II wore a deep green wool-crepe coat and a corresponding green-printed silk dress to Ireland for a state visit in 2011 – and a gown with more than 2,000 silk shamrocks to a dinner that evening.

There are countless other examples: the Swarovski maple leaves on the shoulders of gown in Canada in 2010; a California-poppy-embroidered gown worn to meet Ronald Reagan in 1983; and a gown with a train that evoked the flag of Pakistan when she visited in 1961.

The Queen’s fashion semiotics also worked the opposite way. During Donald Trump’s visit in 2018, it was said that the tactful Queen sent messages via brooches, choosing a simple green one given to her by the Obamas to signify friendship on the then president’s first day.

On the second, she wore a snowflake-shaped brooch given to her by Canada, a country with which Trump was less than pleased at the time. Soft power-dressing at its best.

For Queen Elizabeth II, there’s no doubt there was substance to her style – but she never let a look get in the way of her duties.

As Jess Cartner-Morley wrote in The Guardian: ‘It is testament to her extraordinary life that 70 years of style will go down as one of her more minor achievements.’

‘It is testament to her extraordinary life that 70 years of style will go down as one of her more minor achievements,’ writes Jess Cartner-Morley in The Guardian.