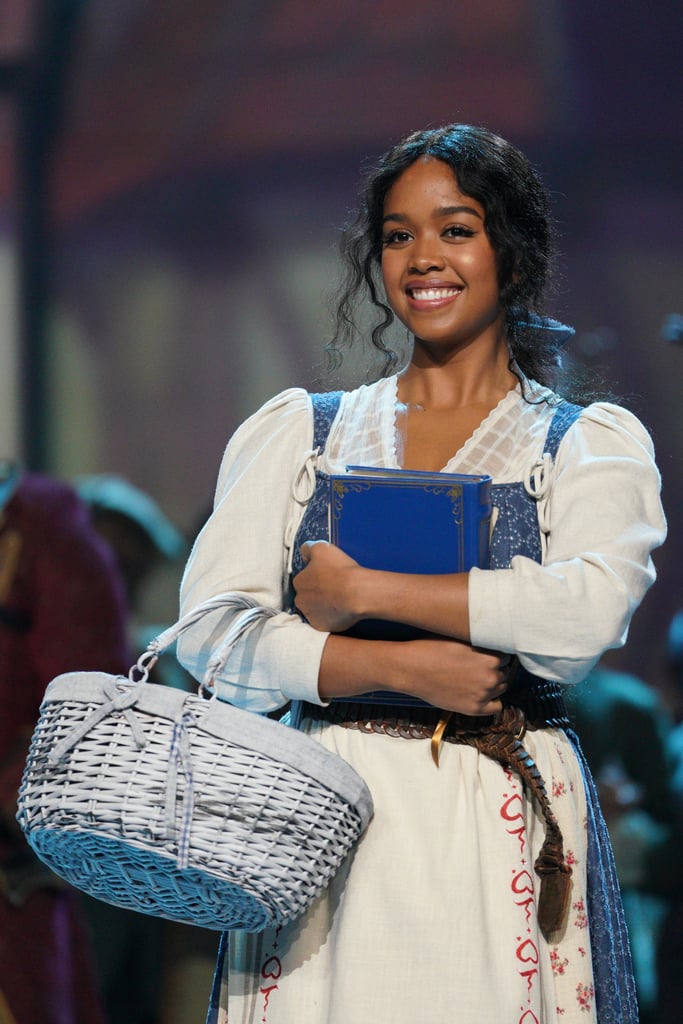 H.E.R is paying tribute to her Filipino heritage in the upcoming “Beauty and the Beast” ABC special. Ahead of its premiere on ABC Dec. 15, then Disney+ the following day, the network offered first-look photos at the two-hour TV special. H.E.R. (aka Gabriella Sarmiento Wilson) is portraying the lead role of Belle. Based on the sneak peek, the singer-songwriter wears at least three different costumes throughout the special, including takes on Belle’s everyday blue dress, signature yellow ballgown, and pink dress with a matching cape.

Throughout the original “Beauty and the Beast” animation, Belle’s daily outfit consists of a simple white blouse and light-blue pinafore. Emmy award-winning costume designer Marina Toybina’s adaptation for H.E.R. is similar, featuring a patterned blue pinafore and an added floral apron. However, an eagle-eye fan on Twitter first noticed a special embroidery outlining the apron. “Bel” is written in Baybayin, an ancient Philippine script, to represent the character’s name. Though the use of Baybayin declined in the 17th century due to Spanish colonization, as user @kryspia referenced, Filipinos have since reclaimed and revived the script.

For the project’s poster, the Filipino-American actor is seen in a yellow-gold pantsuit with a floor-length train draped from her jacket, a chic, modern-day twist on Belle’s princess ballgown. In other behind-the-scenes photos, H.E.R wears a bright-pink gown and matching cape, similar to the animation character’s look in the snow.

H.E.R., who stars alongside Josh Groban as the Beast in the TV special, recently shared she’s excited to breathe new life into her rendition of Belle, in an exclusive behind-the-scenes clip shared with POPSUGAR. “There’s a strength in Belle, you see it in the movie, but I think I’m really trying to bring that out and show women they can be anything they want to be,” she said. “Of course, nobody’s ever seen a Black and Filipino Belle, so it’s really cool that young Filipino Black girls get to see a Disney princess that looks like them.”

See more photos of H.E.R.’s costumes in the “Beauty and the Beast” special ahead of its release.