A mum with ADHD enforces 'no homework at home', 'no friends over' and 'bedtime stories on YouTube' rules for her daughter – as she says they are essential to help her cope with parenting.

Nadine Nett claims she only does two school runs a week for her eight-year-old daughter Evelyn because she finds them 'chaotic and anxiety-provoking' and she will drop her off late if she is anxious. 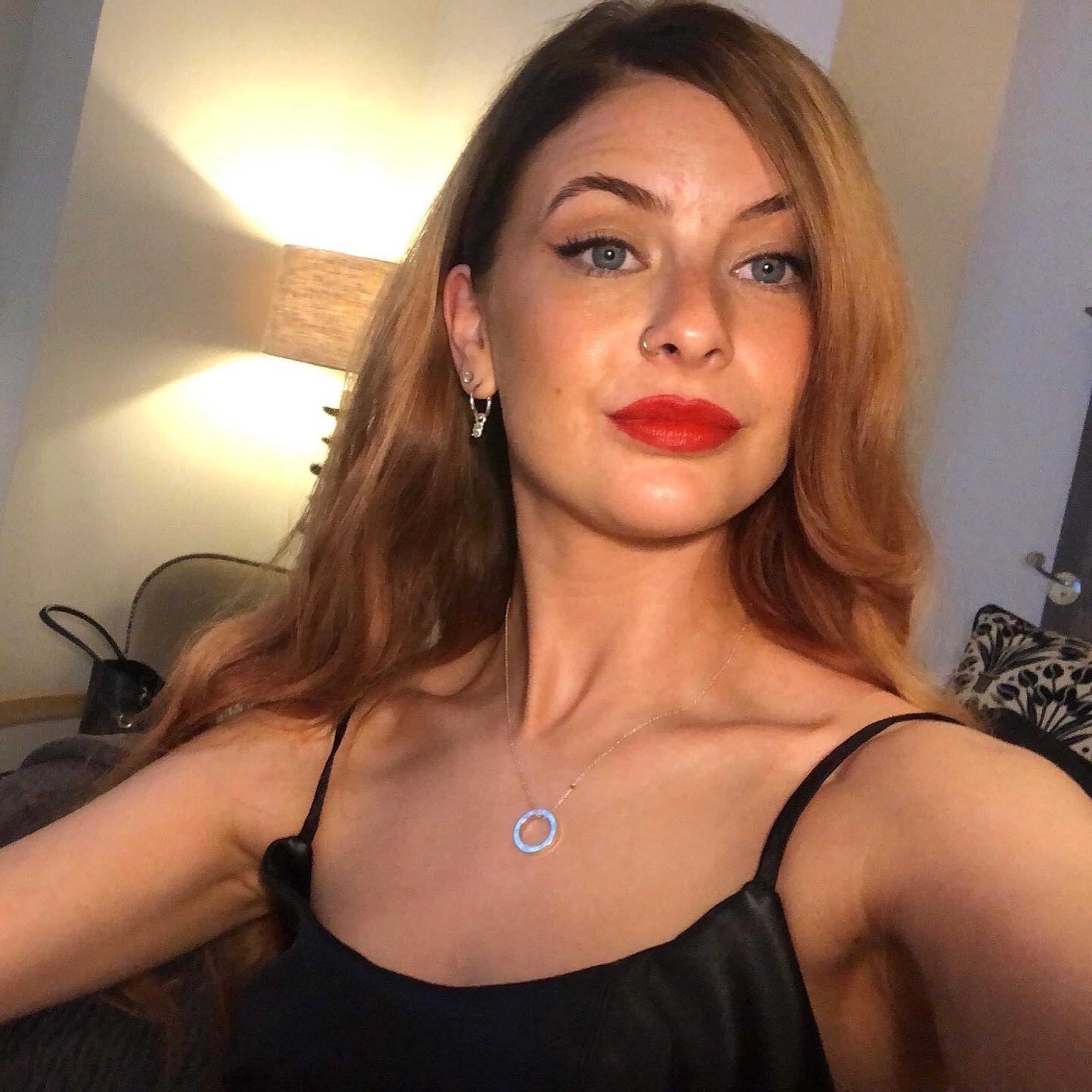 The 30-year-old has numerous rules to avoid becoming 'overstimulated' and triggering an episode of poor mental health, including allowing Evelyn unlimited screen time when she feels overwhelmed and spending two nights a week at her nan's.

Evelyn also watches YouTube bedtime stories on her own or with her mother as opposed to reading before sleep and has her main meal at school, as the mum says her brain 'shuts down' in the evenings.

Nadine says she suffers from overstimulation due to her attention deficit hyperactivity disorder (ADHD) and certain triggers can also cause emotional 'meltdowns' due to her borderline personality disorder (BPD).

The mum shares her techniques and 'accommodations' on social media but she has been inundated with abuse from people who brand her parenting style as 'cruel' or 'neglectful'.

But the youth worker hit back at those who claim to have the same conditions and 'just get on with it' by saying the attitude is toxic and she suspects these people simply 'wish they had the support she has'.

Nadine, from Gravesend, Kent, said: "It's hard because as a parent you're expected to be completely organised and have all your ducks in a row but when you have ADHD your ducks are all over the place and you can't get them in a row.

"The child is perfect but it's everything that comes with the child – all of the school and home stuff and trying to juggle working and managing the house all at the same time.

"All of those tasks require executive functioning which people with ADHD massively lack – all the basic necessities of being an independent adult and parent.

"This year I've roped in help wherever I can find it to help me cope and to shield my daughter from all of my symptoms.

"Yes these systems cost money but if it stops me being overstimulated and stops her coming home every day to a stressful environment then that's what I've got to do.

"I'd rather prevent than let it get to crisis and then have to backtrack and hold back my recovery, so we take a lot of preventative measures."

The mum works closely with her daughter's school to share responsibilities including feeding her and keeping on top of her homework, as well as implementing rules and making 'accommodations' for her ADHD at home.

She says that having that support structure in place means that Evelyn still gets the 'best chance' at life while also enabling her to cope with her mental health struggles.

Nadine said: "She does homework either at homework club or they just don't press her to do it – what better people to help her with homework than the teacher?

"If she does have to do some at home and there's anything she really doesn't understand I will do my best but I don't understand a lot of what they learn.

"My attention span to sit there and go through it with her is zero to none sometimes and I get frustrated quickly if I can't think of something quick enough and she gets annoyed at me as well because I'm slow processing.

"During the week she has her big meal at school and something smaller and easier at home – people took it a bit out of context thinking I was starving her to death but we just swap her meals around.

"She has a smart tv with a YouTube app and either me or my partner will watch bedtime stories on there with her or sometimes she just wants to be left on her own to watch it.

"Sometimes we will read if it's early enough because it gets to a point in the day when my brain just shuts down.

"I don't allow her to have friends round because it can be overstimulating. I do my best to shield her from my triggers but I don't want to risk exposing other people's children to it.

People with bipolar disorder have episodes of:

If you're feeling suicidal, read about where to get urgent help for mental health.

If you're feeling very depressed, contact a GP, your care co-ordinator or speak to a local mental health crisis team as soon as possible.

You could also call NHS 111 if you're not sure what to do or if you cannot speak to your local NHS urgent mental health helpline.

If you want to talk to someone confidentially, call the Samaritans free on 116 123. You can talk to them 24 hours a day, 7 days a week.

Or visit the Samaritans website or email [email protected]

During a manic phase of bipolar disorder, you may:

It's also common to:

You may feel very creative and view the manic phase of bipolar as a positive experience.

"I wouldn't want to have to start doing a crisis plan in front of her friends and then she would be embarrassed as well."

To further reduce the burden of her adult responsibilities, the mum of one pays to have some meals prepared for her to freeze and reheat and she is looking for a cleaner to help manage her house.

Her parents also share her parenting responsibilities by having Evelyn stay over twice a week while Nadine has therapy and helping with the school runs, particularly the pick up, which she finds 'chaotic and anxiety-provoking'.

She says her partner of almost seven years Mason Durrell, 30, acts as the 'logic' in her recovery, helping her to come up with and implement solutions to any obstacles she faces.

Online trolls have branded the mum's efforts to make 'accommodations' for her mental health 'neglectful', meanwhile she says she's teaching her daughter that it's okay to get help.

Nadine said: "People like to say you've just got to get on with it and suck it up but that's just an all round toxic environment to subject my child to, I'm not going to do it.

"I'm also going to raise her to know that if you have an issue, there's no shame in getting help and not letting it get to boiling point.

"I didn't expect the response – people were saying I'm cruel or I neglect her.

"They either seem to be the older generation – who have zero to very little understanding of mental health and just aren't willing to listen – or young people without children.

"Then there's also people with the same illnesses who say I'm a rubbish parent because they just get on with it.

"But I think that comes from a place of not having the support and kind of wishing they did, so they try and make themselves feel better by trying to make me feel bad."

The youth worker was diagnosed with BPD in 2017 and had weekly therapy sessions for six months, before finding a private therapist who she has met every two weeks for the past year.

She was diagnosed with ADHD in October this year after noticing symptoms unrelated to her BPD and is now on the waiting list for medication to help manage her disorder.

Meetings with an ADHD coach twice a week also help her to implement 'coping techniques' and support structures.

These help her to continue juggling work and parenting despite suffering from overstimulation and struggling with the concept and management of time, amongst other symptoms.

Nadine said: "My ADHD is very new, it came about because I have therapy for BPD – I started having symptoms that nothing was resolving and that weren't attached to an emotion.

"So we started exploring that and she suggested I do a self assessment – I scored top marks for ADHD.

"I kind of knew it was coming and it answered a lot of questions for me – I couldn't work out why I've never been able to hold down a regular job like a normal adult without getting bored and ending up getting sacked or leaving.

"Now I know it's because of overstimulation because of ADHD – it's a sensory issue because of the way my brain processes.

"I've come a long way with BPD and I'm getting to grips with that, which is great but I still have a lot to learn about my ADHD."

The mum talks openly about her mental illnesses and parenting support structures to help other mums with mental health issues 'not feel alone'.

Some parents have shown support for Nadine, slamming other 'judgemental' commenters and praising her methods for allowing her to be a 'more present parent'.

She also hopes to increase understanding about and de-stigmatise mental illness to reduce the level of abuse she and other mums with the same disorders are subjected to.

Nadine said: "Mental health in general is misunderstood, nevermind how to parent with it.

"Unless I have a brain transplant there's nothing I can do about my brain and I also can't fit into social expectations set by neurotypical people.

"It's almost like giving a person who is hard of hearing a hearing aid or giving a wheelchair user a ramp – it's just making a modification and it's no different just because it's my brain and not my ears or legs.

"I implement these modifications because in the long run they work with me and not against me." 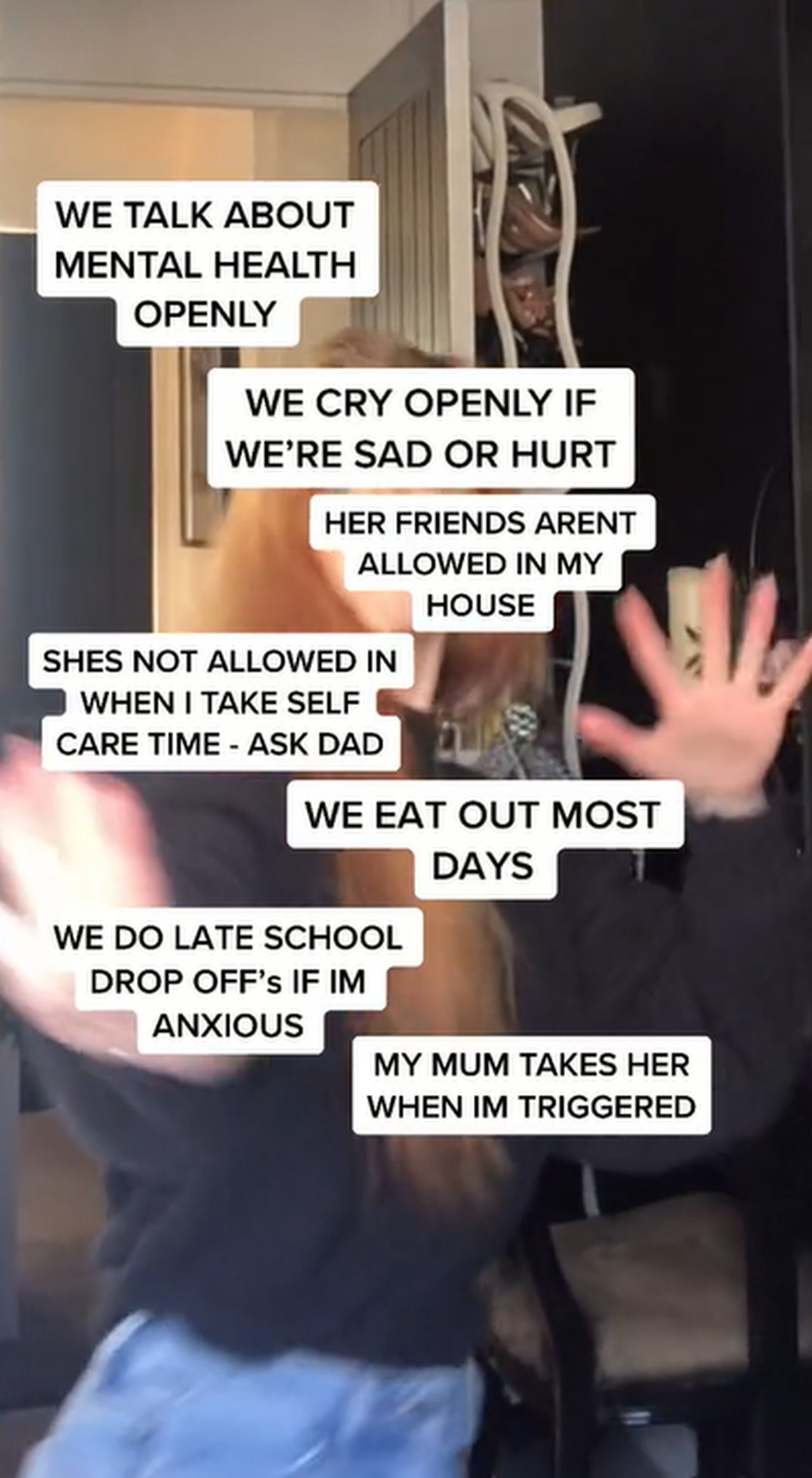 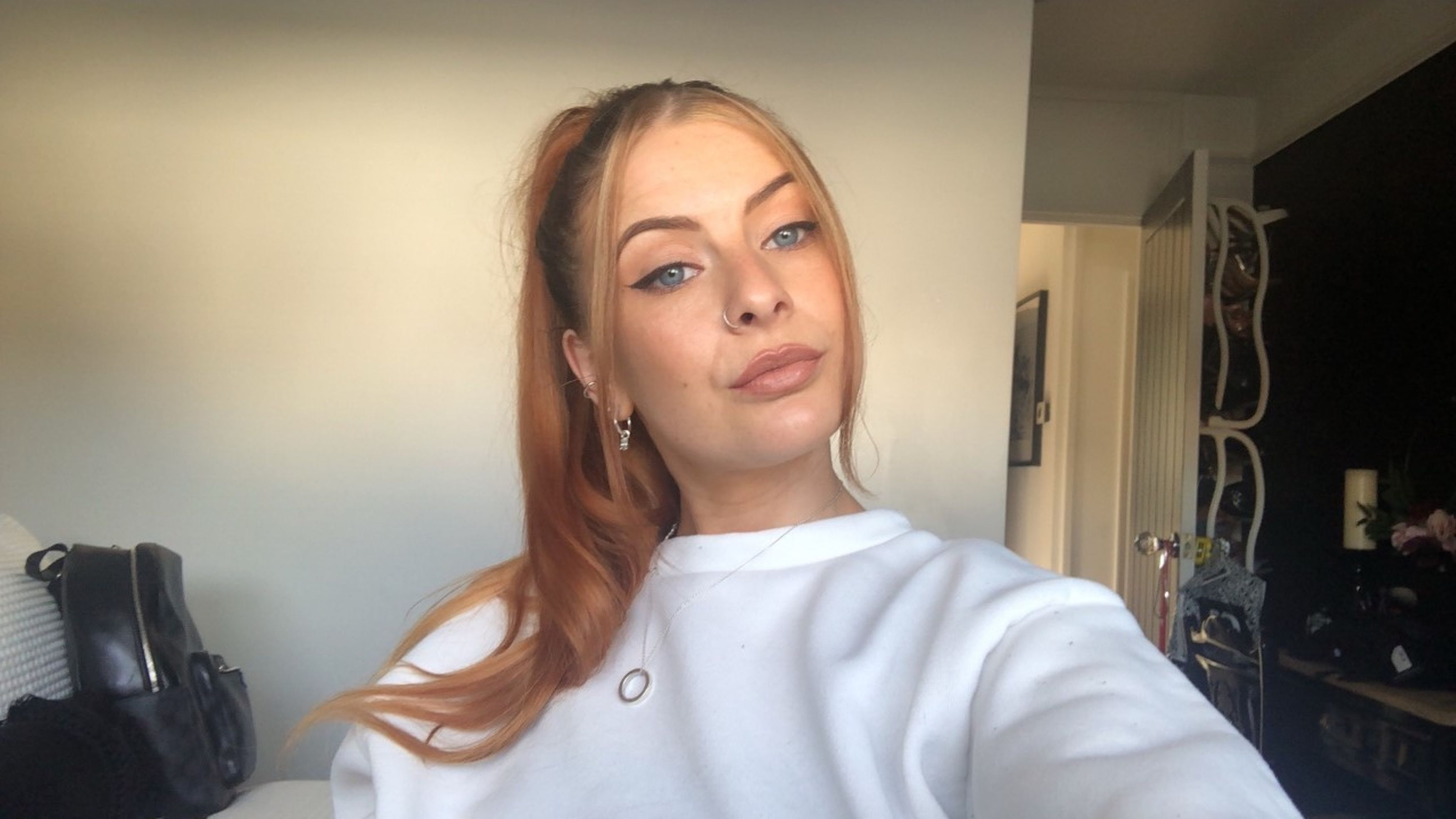 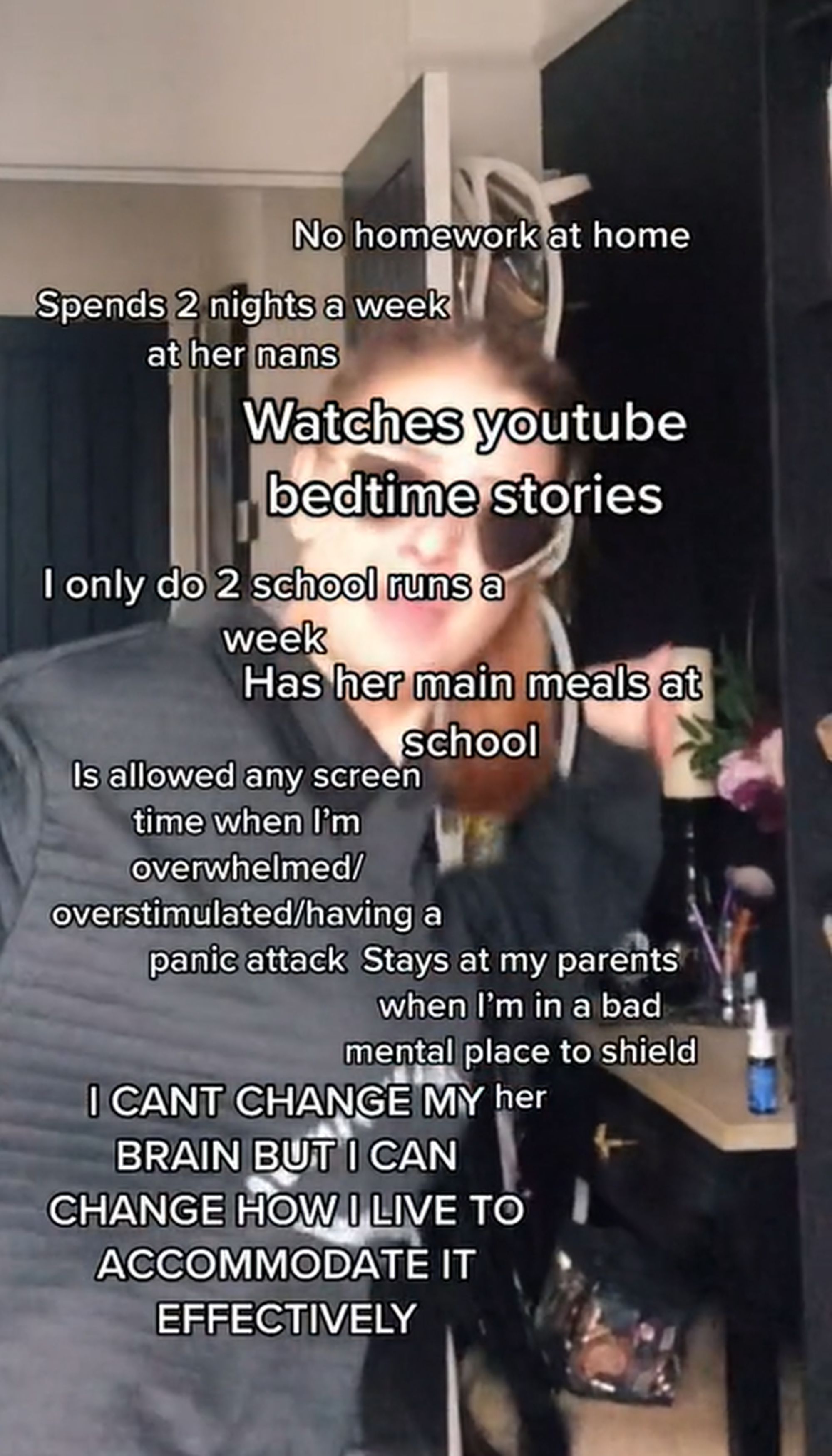 For more parenting stories, see this, I never make my son do his homework and I don’t care if he doesn’t get top grades, life’s too short

Check out this homework, as mum begs for help with her seven-year-old’s maths homework… and even a PROFESSOR can’t understand it

Or see this, I do my kids’ homework for them and have the whole time they’ve been in school, they should be playing not studying