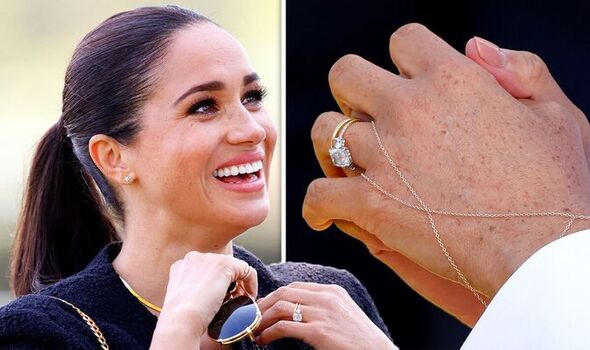 Prince Harry and Meghan Markle’s engagement was announced by Buckingham Palace on November 27, 2017, and the giddy couple posed for pictures in the Sunken Garden of Kensington Palace. Meghan debuted her brand new engagement ring, a trilogy sparkler, to the world, but it has undergone significant changes since it was first debuted. Express.co.uk takes a look at Meghan’s engagement, wedding and eternity rings from Prince Harry.

“It features a large central diamond from Botswana, where the couple enjoyed a romantic holiday to mark the Duchess’s 36th birthday, flanked by two smaller diamonds once belonging to Princess Diana.

“When we first saw the ring in 2017, the stones were set on a simple yellow gold band favoured by Meghan, but two years later they were re-set on a glitzier diamond-studded pavé band.

Small diamonds also now adorn the edges of the main diamonds of Meghan’s ring, adding an extra dimension of sparkle.

Prince Harry and Meghan Markle tied the knot at St George’s Chapel in Windsor in May 2018, surrounded by members of the Royal Family.

The couple exchanged rings, with Harry opting for a textured platinum band and Meghan sticking to royal tradition with her elegant gold ring.

Samantha added: “Completing the trio of rings worn by the Duchess is her wedding band, which is a simple gold band with a rich history.

“The ring was a gift from Queen Elizabeth II and is made from rare Welsh gold – the same gold used in our Clogau jewellery.

“The Queen was gifted one kilogram of this precious metal from the Gwynfynydd mine in north Wales to mark her 60th birthday in 1986, and several royal rings have been made from this gold store in the years since.”

Kate, Princess of Wales began sporting a diamond eternity ring after the birth of her first child Prince George in 2013.

This trend seemed to appeal to the Duchess of Sussex too, who also owns an eternity ring but doesn’t always wear it publicly.

Meghan debuted the stunning diamond and gold band at Trooping the Colour shortly after the birth of her first child Archie Harrison Mountbatten-Windsor.

“It features conflict-free diamonds on the upper side, plus a peridot, emerald, and sapphire on the underside representing the birthstones of Meghan, Archie and Harry.”

Now the Sussexes are a family of four, it stands to reason that the eternity ring may have been altered to include baby Lilibet’s birthstone of pearl.

Meghan is known to switch up her rings and has been pictured previously wearing an ‘L’ ring in tribute to her younger child.