Have a desire to craft some looks from “Schitt’s Creek?”

The Lion Brand Yarn Co., a fifth-generation, family-owned business, will launch official “Schitt’s Creek” yarns and patterns, which will be available for purchase at the end of this year. The collaboration is a result of a licensing deal between Lion Brand and ITV Studios, the global distributor of the award-winning “Schitt’s Creek” series.

The Lion Brand’s line of “Schitt’s Creek” products will include various styles and colors of yarn, including white, heather gray, blush and jet black, all of which will bear an exclusive “Schitt’s Creek” label. It will also feature a variety of patterns for adults and children, with detailed instructions on how to create the clothing inspired by the “Schitt’s Creek” characters. That includes characters David Rose’s collection of sweaters (worn by actor Dan Levy) and Alexis Rose’s spirited, bohemian cardigans (worn by actress Annie Murphy), along with matching merchandise such as pillows and throw blankets.

It will be available at specialty retailers, as well as lionbrand.com. Retail prices are $9.99 and up.

“We are excited and proud to be partnering with ITV Studios and launching a product line inspired by ‘Schitt’s Creek,’ a show that has captured the hearts of TV viewers in multiple countries,” said Chris Mills, president and chief executive officer of Lion Brand Yarn Co. “In addition to releasing exclusive yarns and patterns that will allow fans and crafters to recreate their favorite garments, we’re honored to be associated with a show that promotes positivity, warmth, and inclusivity — messages that are integral to Lion Brand’s mission as a company.”

Kim Dingler, chief operating officer of Global Entertainment ITV Studios, said, “Dan Levy, the cocreator and star of ‘Schitt’s Creek,’ famously sought out garments on Etsy and eBay to outfit himself and his castmates. Now, thanks to Lion Brand, a company that shares the “Schitt’s Creek” ethos of community, consumers and crafters  will have a one-stop shop and be able to make their own ‘Schitt’s Creek’ outfits.” 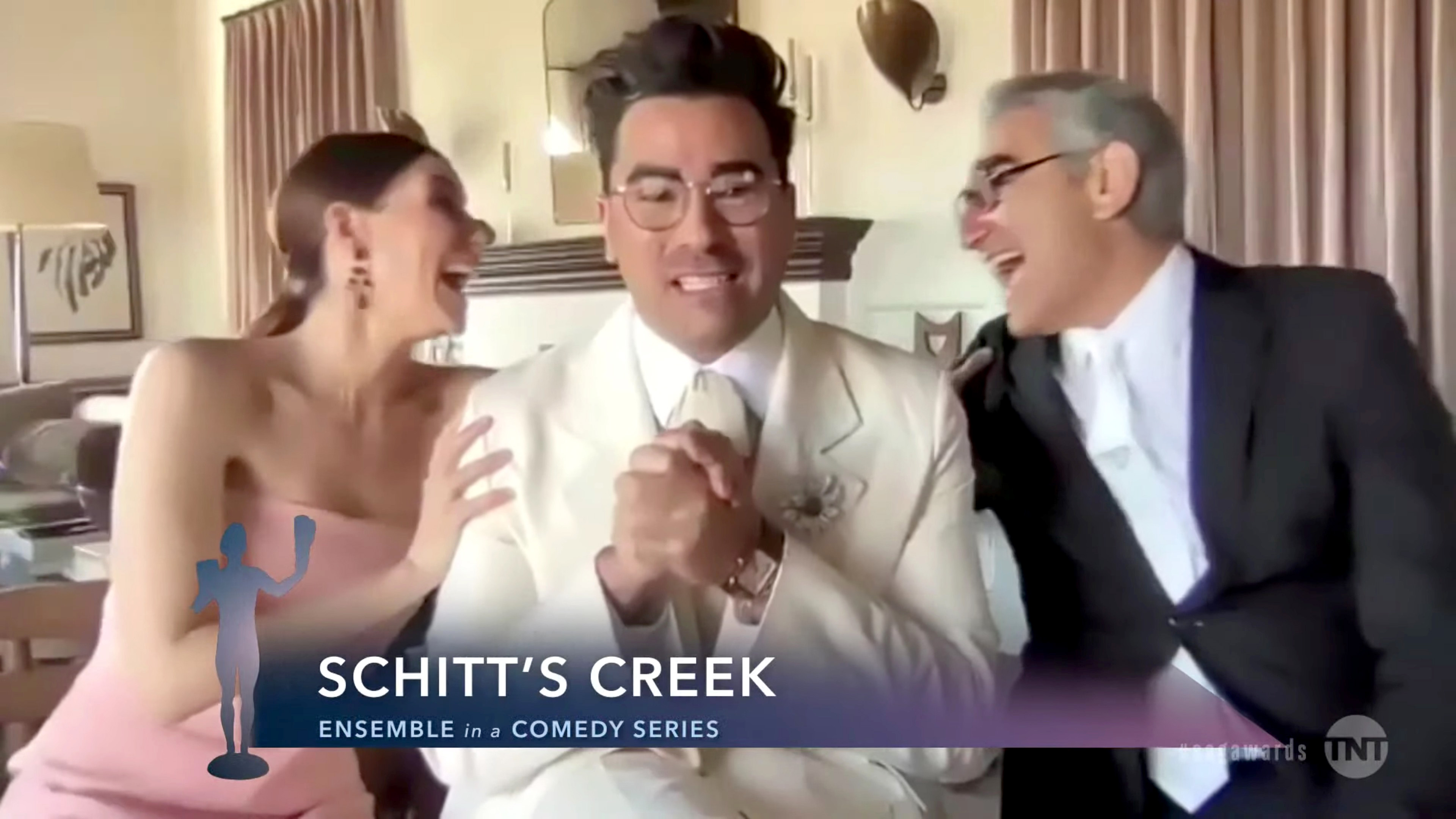 Sarah Levy, Dan Levy, and Eugene Levy, winners of Outstanding Performance by an Ensemble in a Comedy Series for “Schitt’s Creek,” speak during the 27th Annual Screen Actors Guild Awards on April 4, 2021. Getty Images for WarnerMedia

“Schitt’s Creek,” created by father-and-son duo Eugene and Dan Levy,  premiered in 2015 on Pop TV. Over five years and six seasons, the story of a wealthy family displaced and brought down to earth in a modest small town called “Schitt’s Creek” exploded in popularity. The show became popular for its bold fashions, along with its characters and storylines. For its final season, it won nine awards at the 72nd Primetime Emmy awards, including Outstanding Comedy Series, as well as two Golden Globes. The show’s creative team decided to end the show in the spring of 2020.