Home » Fashion » The 2021 fashion moment that outdid The Met Gala

In the world of fashion where air kisses are often meaningless, the design community banded together on Tuesday and paid tribute to Alber Elbaz, who died of COVID-19 in April, aged 59. With contributions from Giorgio Armani, Ralph Lauren, Burberry and Christian Dior, the final show of Paris Fashion Week was a lingering French kiss to the designer who single-handedly revived the house of Lanvin.

Elbaz’s peers and admirers created moving pieces through the filter of the immediately recognisable designer, with his shrunken suits, portly figure and bow ties. Unlike this year’s Met Gala, where the theme In America: A Lexicon of Fashion produced disparate results, such as Kim Kardashian wearing a black hood and pop singer Kim Petras in a horse head, this was what is described among front-row denizens as a “moment”. 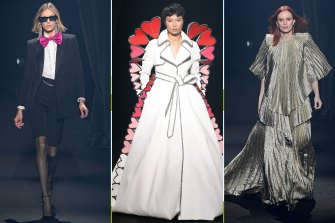 Both Ralph Lauren and Anthony Vaccarello at Saint Laurent (where Elbaz had taken over from the house’s founder in 1998, before being replaced by Tom Ford in 2000 and moving to Lanvin in 2001) sent out models in updated versions of his runway uniform.

Viktor & Rolf and Jean Paul Gaultier riffed on red hearts, another familiar motif of the Moroccan-born, Israeli-raised Elbaz, against a sombre backdrop. 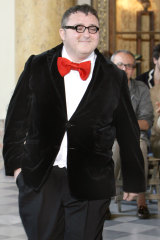 Alber Elbaz taking a bow in 2007 while creative director of Lanvin. Credit:AP

The dramatic show, called Love Brings Love, borrowed its structure from a 1945 Paris exhibition, Théâtre de la Mode, where 60 designers celebrated the end of World War II but was purely Elbaz. At the beginning, guests including Naomi Campbell and Vivienne Westwood milled on the runway, enjoying snacks and drinks, a welcome tradition introduced by Elbaz during his Lanvin tenure. I wish I had kept a biscuit in a cartoon figure of the designer from a Lanvin show, but like everyone in fashion, I was hungry.

In an interview with American Vogue, designer Gabriella Hearst who took part in the tribute as creative director for Chloé, remembered, “He was modern in his attitude of understanding that the most démodé thing was to be a snob.”

After being fired from Lanvin in 2015, following disagreements with the brand’s Chinese media magnate owner Shaw-Lan Wang, Elbaz took a break from the fashion industry, only returning this year with the backing of luxury group Richemont, launching the more democratic AZ Factory label.

This show, which closed with a collection of AZ Factory pieces, demonstrated just how sorely Elbaz will be missed, and how beautifully fashion can move on.

Love Brings Love was a fitting finale to the last day of the spring 2022 season, which began in New York last month, before moving to London, Milan and finally Paris.

At Chanel, Karl Lagerfeld’s successor Virginie Viard continued stripping the famous house back to basics. Models vamped on the runway, injecting personality into deceptively simple striped summer dresses, ’60s tunics and sheer butterfly prints. The feeling of something missing might have been the lack of an extravagant set, with past shows featuring an alpine village, icebergs and a 148-metre long ship. Chanel did say to always take something off before leaving the house. 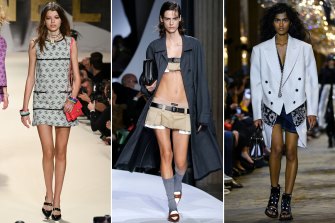 At Miu Miu, Miuccia Prada was shooting from the hip, with low-slung cropped skirts and unravelled jumpers elongating toned midriffs. The mini-skirt, which has returned with a vengeance this season, was a scene-stealer. It has been heralded as a sexy return to office dressing but could result in countless calls to HR.

Nicolas Ghesquière at Louis Vuitton continued toying with silhouettes, with broad shouldered capes and skirts calling to mind Marie Antoinette excess but it was the sharp denim pieces with perfectly fitted jeans and jackets that upstaged the extravagance.

A heady mix of promise balanced by what the fashion industry has lost.

Make the most of your health, relationships, fitness and nutrition with our Live Well newsletter. Get it in your inbox every Monday.