Home » The Curious World of NFT Real Estate and Design

It’s not uncommon for people to buy vacation homes they may only visit a few times a year. What about a home you never visit? And that doesn’t actually exist?

The market for digital files sold as “nonfungible tokens,” or NFTs, has exploded this year, most notably when an artwork by Beeple sold for $69.3 million at an online auction held by Christie’s in March. But real estate, architecture and design are also booming in the virtual marketplace.

Hrish Lotlikar, co-founder and chief executive of SuperWorld, an augmented reality virtual world, said the company had sold “thousands of properties” already in 2021, with users spending, on average, around $2,000 on the virtual real estate platform.

SuperWorld is geographically mapped onto the real world, divided into 64 billion plots of equal size covering the surface of the earth. So a person could theoretically own the Eiffel Tower, the Colosseum in Rome or prime commercial property in Lower Manhattan. Or if you’re nostalgically inclined, an NFT of your childhood home.

“Some of those iconic properties people bought right in the beginning,” said Mr. Lotlikar, who grabbed up nearly 100 virtual properties on his own platform, including one of the Giza pyramids in Egypt, Piccadilly Circus in London and several blocks in Manhattan in and around Times Square. “But everyone, regardless of where you grew up, you have special places.”

Unpurchased 100-meter by 100-meter plots on SuperWorld cost the same — 0.1 Ether, or the equivalent of $250 based on the recent value of the cryptocurrency. 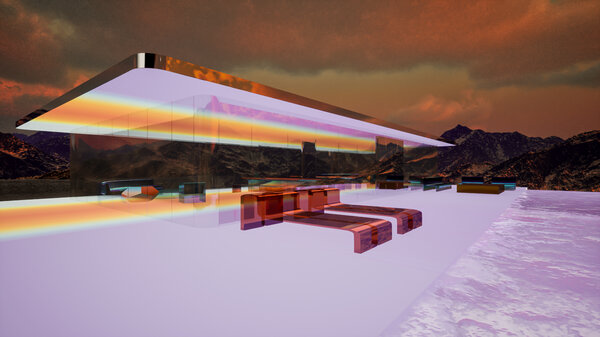 Marcus Fairs, the founder and editor-in-chief of Dezeen, an architecture publication that has covered the world of virtual design sold as NFTs, said many of his readers have pushed back against the trend. “We get angry commentators saying: ‘Just stop, will you?’” Mr. Fairs said. “A lot of people think it’s nonsense.”

Indeed, isn’t the most essential function of a house to provide physical shelter? What can you do with a virtual sofa if not sit on it? The practical use case is not unlike Lunar Land, the company that sells land on the moon (John Cleese, the comedian and “Monty Python” alum, recently spoofed the NFT craze, and likened it to a classic huckster sales pitch, when he offered an NFT of an iPad drawing of the Brooklyn Bridge for $69.3 million).

At this early stage, it’s hard to know whether virtual real estate and architecture is a curious fad or the future. Mr. Fairs, for one, is intrigued by the possibilities. “I do think the movement behind it is valid,” he said. “Clearly, we’re moving very quickly now to a state where a virtual world can do everything we can do in the physical world.”

If you’re scratching your head at people paying real money for virtual property in a simulated world, consider that Mars House, billed as “the first NFT digital house in the world,” recently sold for 288 Ether, or $512,000.

Krista Kim, the Toronto-based artist who designed Mars House, said she created it on an iPad last spring. She had been making what she described as “digital Zen gardens,” and Mars House, inspired by the serene and stylish architecture of Kyoto, Japan, was her actual dream home: It was designed specifically for the metaverse, the term for a shared virtual space.

When she listed Mars House for sale on the NFT marketplace SuperRare, Ms. Kim was curious to see whether this digital house would sell for the amount of a real home. She wasn’t surprised when it did.

“I could foresee in the future that we would have digital architecture,” Ms. Kim said, where with augmented reality glasses, “people would spend times in digital homes, digital spaces.”

Mr. Lotlikar imagines monetizing virtual real estate within the metaverse — say, by leasing billboard space to advertisers or buying and selling properties as you would in the physical world. Ms. Kim has been granted permission by the new owner of Mars House to open it for public tours and private events through the virtual reality platform Spacial. “We are going to host the first metaverse wedding in June in the Mars House,” she said.

Andres Reisinger, a digital artist based in Barcelona, Spain, designs surreal furniture that moves back and forth between the physical and the digital. “The original works are digital,” Mr. Reisinger said. “But it’s very interesting when some of my digital pieces evolve.”

Take, for instance, his Hortensia chair. Mr. Reisinger created the chair covered with geometric pink petals as a digital work, wanting to capture “the feeling of blooming flowers.” But after posting an image to Instagram, the chair met with such fanfare that he put it into production. A limited-edition sold out through a gallery in Milan. Now he is in talks with Moooi, the Dutch furniture brand, to create a line based on his digital designs.

Mr. Reisinger’s latest NFT furniture series, the Shipping Collection, numbered 10 digital pieces, five of which were physically produced as well, and sold for the equivalent of $450,000 in crypto. “Some collectors were almost rejecting the physical pieces,” Mr. Reisinger said. “For them, the ownership of the artworks was more important.”

Pablo Fraile, a self-described digital art patron, collects the work of Mr. Reisinger. The work has “a layer of depth,” he said, that is beyond even traditional art. “He was able to produce an object that I have in my home, and I also have the NFT, and I also have the digital object,” said Mr. Fraile. “That is the only single available object of that kind.”

Yes, he acknowledged, a real chair is more useful. You can admire it in your home. “But it is less efficient than what I can do with the digital ones,” said Mr. Fraile, who lives in Miami. “We’re going to do a show in Europe. The NFT is going to cost me a few dollars to send and it can be presented in many ways.”

Shane Dulgeroff, a 27-year-old real estate investor in Southern California, has tried to cash in on the NFT trend and do Mars House and SuperWorld one better. Instead of a digital asset that trades hands, Mr. Dulgeroff is attempting to auction off an actual home in Thousand Oaks, Calif., that also includes an NFT artwork by the artist Kii Arens — essentially, buy the house, get the nonfungible token.

Instead of going through the Multiple Listing Service, or MLS, Mr. Dulgeroff used the OpenSea platform, yet another marketplace for digital items and crypto collectibles. The minimum bid is 540 Ether, or around $1.5 million.

“Did I want to sell the real estate? Not really,” Mr. Dulgeroff said. “But it’s the first real estate sale being transacted in the NFT format. I was willing to do it to be a navigator of the space.”

So far, there is more than a week to go, and no bids.