Home » Fashion » Trump Impeachment a War of Words and Masks

When the U.S. House of Representatives gathered Wednesday to debate the second impeachment of President Donald Trump, following the violent insurrection at the U.S. Capitol last week, it was a war of masks as much as a war of words.

“Censored” read one mask, “I take care of you, you take care of me,” read another, as House members wore their sentiments on their, er, mouths.

At least all — Republican and Democrat — were wearing masks on the floor, thanks to House Speaker Nancy Pelosi on Tuesday implementing fines for members who do not: $500 for the first offense and $2500 for the second offense.

Since the start of COVID-19, the face mask has become the most politicized piece of cloth on the planet, and defying health official recommendations to wear them a statement of (misconstrued) rebellion–from Trump’s dramatic flinging off of his mask upon returning to the White House from being treated for the coronavirus at Walter Reed Medical Center in October, to Bruce Willis being thrown out of an L.A. Rite Aid for refusing to wear his in the global hotspot this week.

Anti-mask protests have continued even as the pandemic has reached its darkest days in the U.S., and the thugs who stormed the Capitol on Wednesday went mask-less, too, even as they dressed in all manner of offensive white supremacist and anti semitic attire.

Streetwear’s Leaders of the New School

Pelosi has been a modeler for mask wearing since the start of the pandemic (despite an incident in a San Francisco hair salon), playfully matching her masks (often bought from the Donna Lewis boutique in Old Town, VA according to Elle magazine) to her suit jackets. 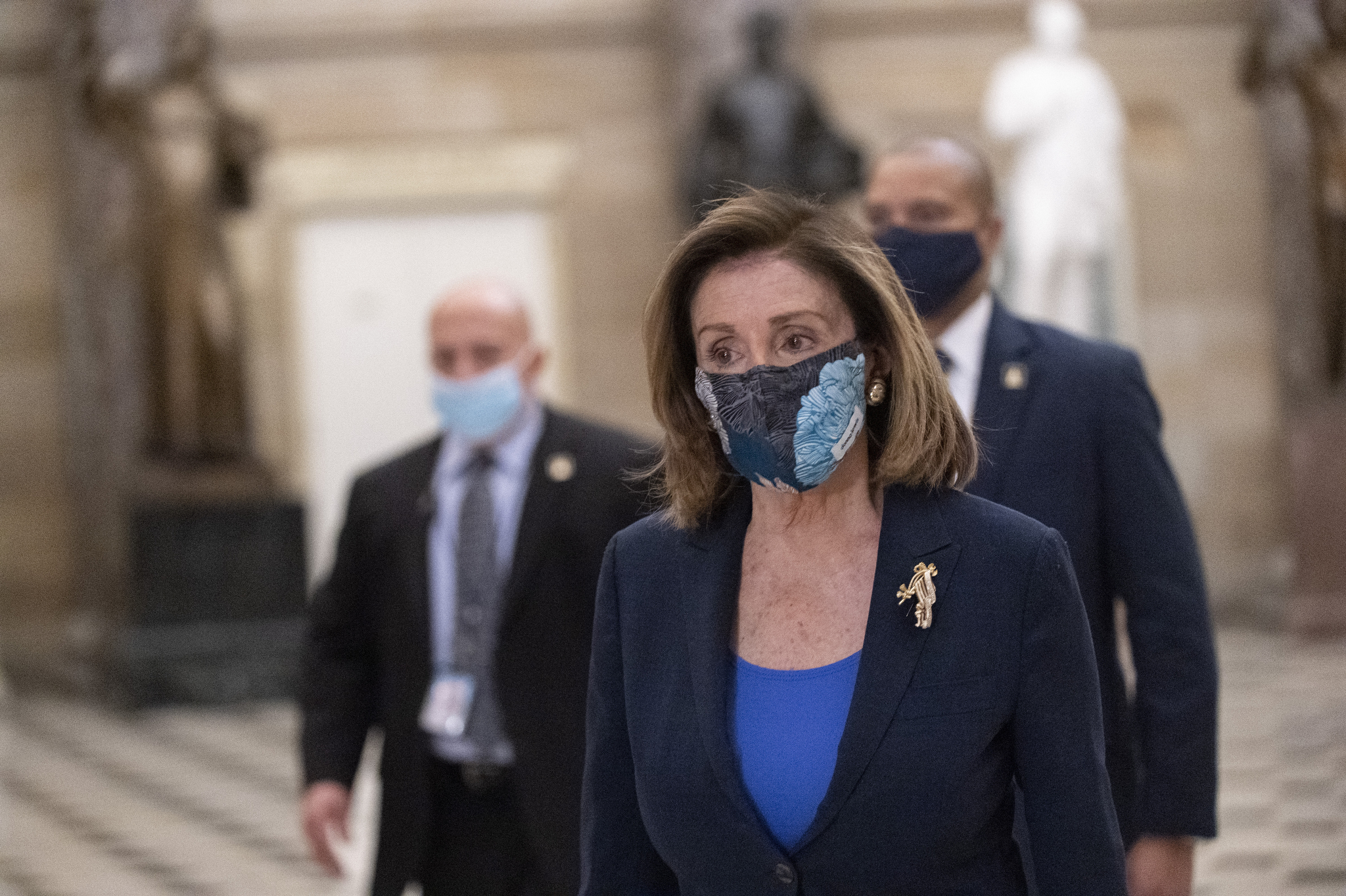 Speaker of the House, Nancy Pelosi. Sipa USA via AP

This week has been no different. In cheerful florals, or William Morris-like prints, her masks take on the quality of a scarf when worn down around the neck–as displayed during the Capitol siege, and when she was interviewed by Lesley Stahl for this week’s “60 Minutes.” She’s unflappable. For today’s historic roll call, the Speaker wore the same outfit she wore to Trump’s first impeachment vote.

And apparently, her mask messaging has sparked a trend among House members, even those firmly in the anti-masker camp. Marjorie Taylor Greene, the freshman Republican from Georgia, wore a mask with “Censored” emblazoned across the front as she took the floor Wednesday to object to the article of impeachment. The masks are widely available online, including on Amazon, where an outfit called Crazy Dogs T-shirt Store also sells “OK, Karen” masks.

It was a shocking image seeing that word–“censored”– on that mask on the House floor, conjuring “The Handmaid’s Tale” or worse.  Except that Greene, an avid anti-masker, was wearing it while she was exercising the most pure expression of democracy there is–dissent. Not much censorship there.

Other members wore masks with state flags or seals or, in New York Rep. Yvette Clarke’s case, red sequins. The democratic member used the floor to voice her support for impeachment, and honor Jan. 13, founder’s day for her Delta Sigma Theta sorority at Howard University, with an all-red look. 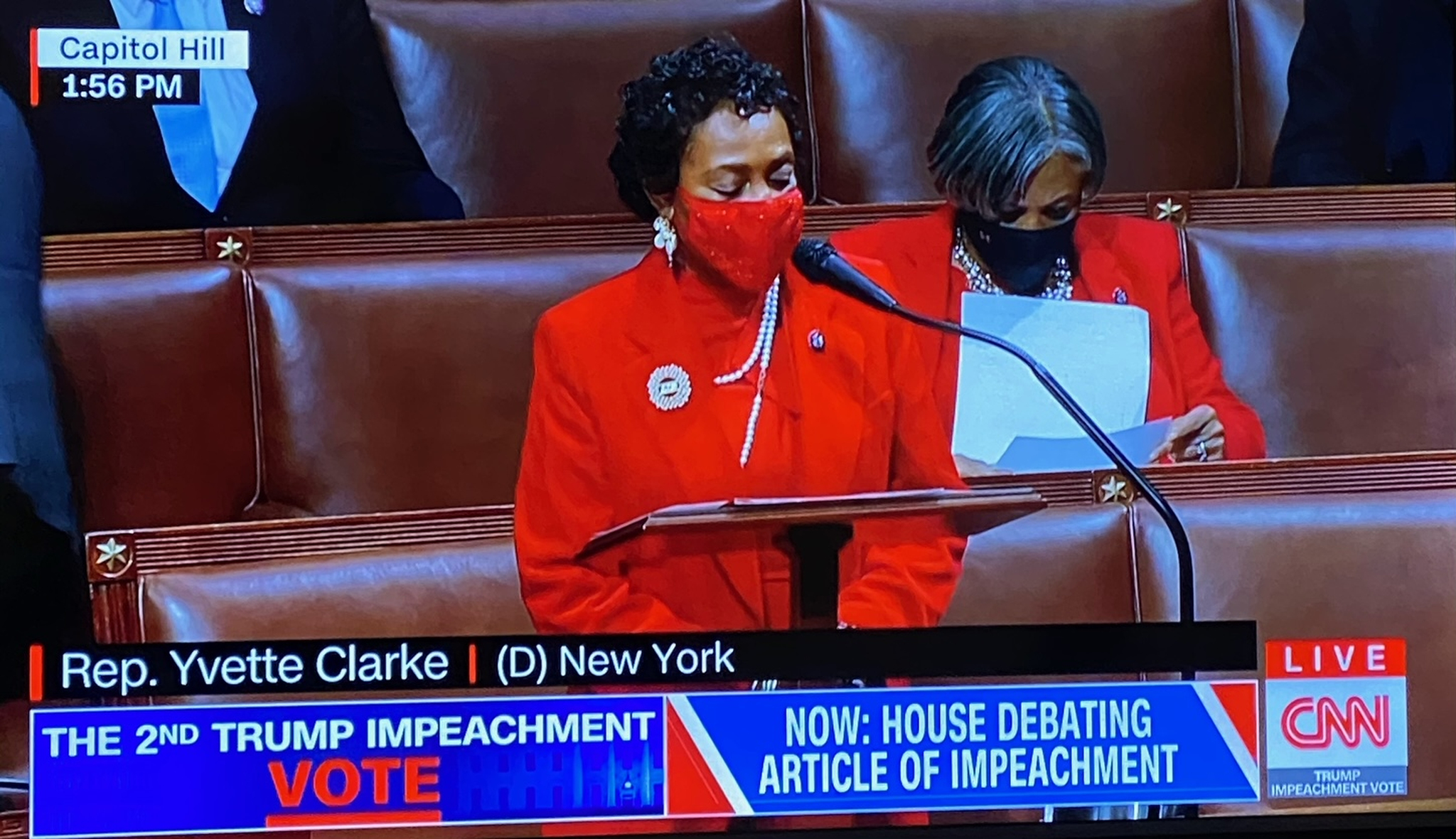 “What took place on Jan. 6, 2021 was an act of domestic terrorism by right-wing sycophantic white supremacists promoted, instigated and advanced by the the man in the White House, Donald Trump,” she said, before invoking Martin Luther King Jr.’s beliefs on violence as a descending spiral that only multiplies evil.

Her nod to Howard, her words and indeed her mere presence in the Congress were a reminder of the racial undertones that permeated the debate over the insurrection, which some Republican members went so far as to try to compare to last year’s Black Lives Matter protests.

It also brought to mind incoming vice president Kamala Harris, her own Alpha Kappa Alpha sorority which she holds so dear, and the historic moment just a week from today when she will become the first woman and woman of color to take on the role.