Home » Fashion » Turkey, trimmings and chocs – what does all that festive grub do to our insides?

IF you are paying the price for all that festive over-indulging and battling with embarrassing tummy troubles, you are not alone.

Is it any wonder we are bloated and struggling to do up our favourite jeans after stuffing our faces with turkey and all the ­trimmings over the weekend? 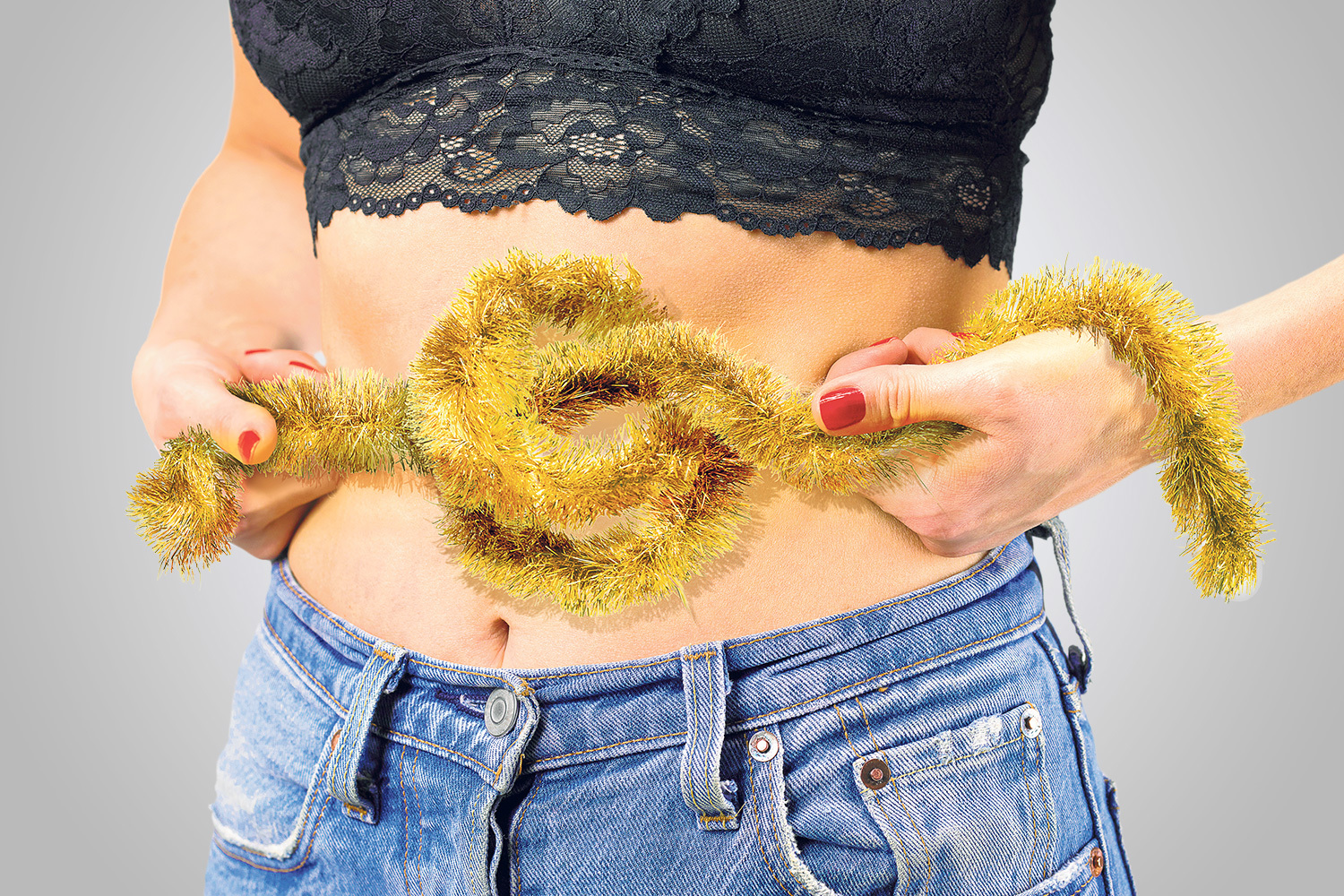 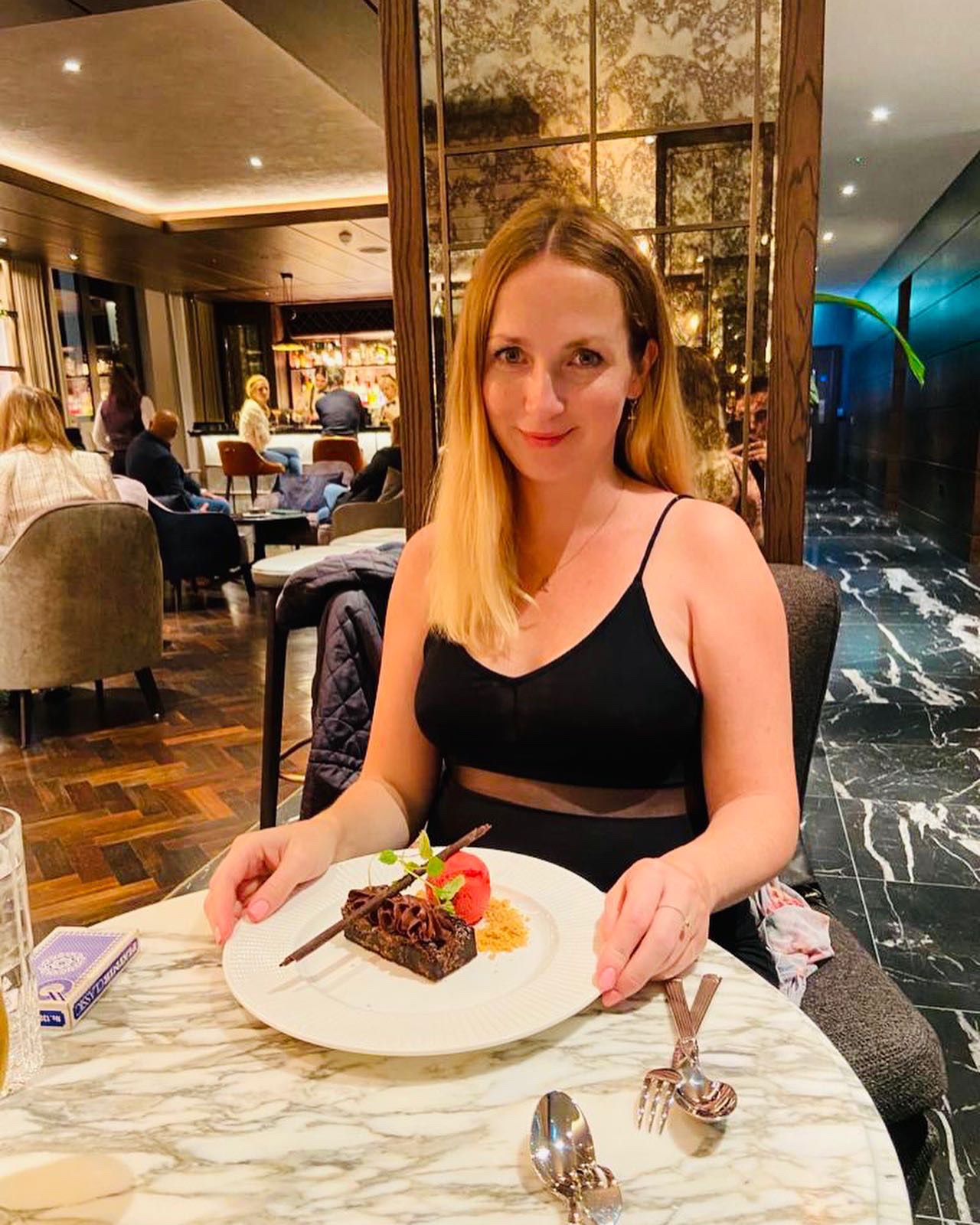 The average person can consume a whopping 5,000 calories or more on Christmas Day alone.

But what does all that do to our insides? Julie Thompson, specialist gastroenterology dietician and information manager from Guts Charity UK, says there are several ways over- indulging can affect us over the Christmas break.

“People can experience a change in bowel habit over the holiday ­season and this can mostly be down to lifestyle factors and is ­usually short term,” says Julie.

“However, if symptoms persist longer than two to three weeks, or any ‘red flag’ symptoms occur, such as weight loss, blood in poo or swallowing problems, people should see their doctor.”

Common festive gastro troubles include painful indigestion, heartburn and reflux — often from scoffing too much too quickly (blame that second bowl of Christmas pud) — as well as bloating, flatulence (we’re looking at you, Brussels sprouts) and constipation.

And if those turkey cold cuts you snacked on were left out on the side too long, diarrhoea and food poisoning can also be a problem.

ROLLING IN THE DEEP END

Emily Hearsey, 50, a film extra from Harrow, North London, knows all too well just how unpleasant bloating can be. Come Christmas, she happily eats what she likes — but later, she knows, her tummy is going to bear the brunt of her festive ­cravings.

“I eat what I want at Christmas, but I do end up bloated and uncomfortable,” says Emily, who has lived with the problem for as long as she can remember. It is the price I don’t mind ­paying during the festive season.”

Rich meals that have a high fat content, such as Christmas dinner with all those roast potatoes, can delay the emptying of the stomach, which can trigger bloating.

For most of us, chewing food well and taking time over a meal — alongside cutting back on, or ­skipping, fizzy drinks entirely — can help beat the bloat. But for Emily it is not so simple, especially because she suffers from constipation too.

It is the price I don’t mind ­paying during the festive season.

“I’ve learned to live with it now, but it does change my diet a lot,” she says of her tummy issues. If I’ve got a party or event ­coming up and want to wear a tight dress, I’ll eat soup for a few days before. I know my stomach won’t look good in what I want to wear if I haven’t been to the toilet in four or five days, so I take that into account with what I eat.

“It’s not unusual for me to go three or four days without a bowel movement.

“I remember being a teenager and straining on the toilet and just some blood coming out. I’ve tried all the over-the-counter remedies, from Senokot to prune juice. I’ve seen the GP several times over the years and been given ­various medications and gel and powdered fibre but nothing makes a difference.”

Emily had some success with a stool softener on prescription. But, she says: “I was in agony — I had really bad stomach cramps and was sweating and couldn’t sleep.

“It did evacuate my bowels but the side-effects were so bad I didn’t use it again. I’ve tried drinking loads of water and even strong coffee, but nothing seems to get my bowels moving.”

Emily has learned to adjust how she lives to manage her issues. She says: “I’ve given up on ­investigations because I’ve been fobbed off by so many GPs. They want me to try things I’ve tried before and because I’ve adapted my life to live alongside it, they don’t take it too seriously.

“I’m so envious of friends that go (for a number two) every day and don’t think twice about it. I’ve spent thousands of pounds over the years on different types of foods and over-the-counter drugs. I used to worry it could be a serious health condition, but I’ve had it for so long now, it’s just how I’m made.”

Full-time mum Lizzie Duddridge never gets to eat what she wants — even Christmas dinner. The 31-year-old from the Rhonda Valley, South Wales, has suffered severe heartburn and acid reflux for more than 20 years.

I can’t have the rich, indulgent starters or puddings like everyone else does.

She says: “On Christmas Day I have a much smaller and more plain version of what everyone else has, so it’s just turkey and some plain potatoes. I can’t have the rich, indulgent starters or puddings like everyone else does.”

Even on normal days she says her diet “must be one of the most ­boring in the world”. Lizzie says: “I have Weetabix most mornings, a plain cheese sandwich for lunch and plain poached chicken most nights with plain rice. Even then I still have to use Rennie tablets to try to stop the heartburn and acid reflux. I’ve had it as long as I can remember and it’s changed my whole life.”

Heartburn is a pain in the centre of the chest that occurs after ­eating, lying down, or bending over and is often described as a ­“burning” sensation. Acid reflux is the regurgitation of stomach contents, including acid, into the gullet.

One in four people experiences those symptoms. But Lizzie suffers with both so seriously they now dominate her day-to-day life. She says: “I can’t drink, I can’t eat out, I can’t eat after 6pm, I have to sit down when I’ve finished a meal to let it digest a bit or it gets worse. I’ve had it so badly sometimes I’ve been on the floor in agony. A few years ago I thought I was having a heart attack and nearly called an ambulance.

“I’d do anything to enjoy a few glasses of wine and a takeaway with my friends. Other than Rennies, the only thing that seems to help a bit is cooled boiled water.” Finding a way to ease the discomfort has become all-consuming. She says: “I spend at least £10 a week on over-the-counter remedies such as Gaviscon and Rennies. I’ve seen so many GPs but never had a proper permanent solution.

“I’ve been given prescription drugs like omeprazole but the side-effects were horrendous. I felt dizzy and sick with terrible headaches. I came off it after a few weeks as it was as bad as having the heartburn and reflux.”

Lizzie adds: “Every time I see the GP, that’s what they suggest — despite the fact it didn’t work for me. I can’t remember what life was like when I was normal, but it does make me sad I can’t live my life like my friends can.

“I cook whatever my children want, but it’d be lovely to be able to enjoy it with them.”

Music promoter Claire Reilly does get to tuck into Christmas dinner, but unlike everyone else round the table, she risks being constipated for up to eight days afterwards.

“I indulge just like everyone else does at Christmas,” says the 35-year-old, from West Sussex, who has struggled with constipation since she was a child. “Normal” stool function is different for everyone but it ranges from three times a day to three times a week.

Claire, who has two children, says: “The longest I’ve ever gone without going to the toilet is eight days. I’ve seen the GP but never been referred for further investigations because it doesn’t happen all the time.

I indulge just like everyone else does at Christmas.

“I’ve tried all the diet and over- the-counter remedies. I have a pretty healthy diet most of the time too — lots of fruit and vegetables, lots of water.”

Claire is worried that her children will go on to suffer the same problems she does.

She says: “While they’re only little at the moment, if they had the same issues as me I’d definitely not rest until I got to the bottom of what causes it." 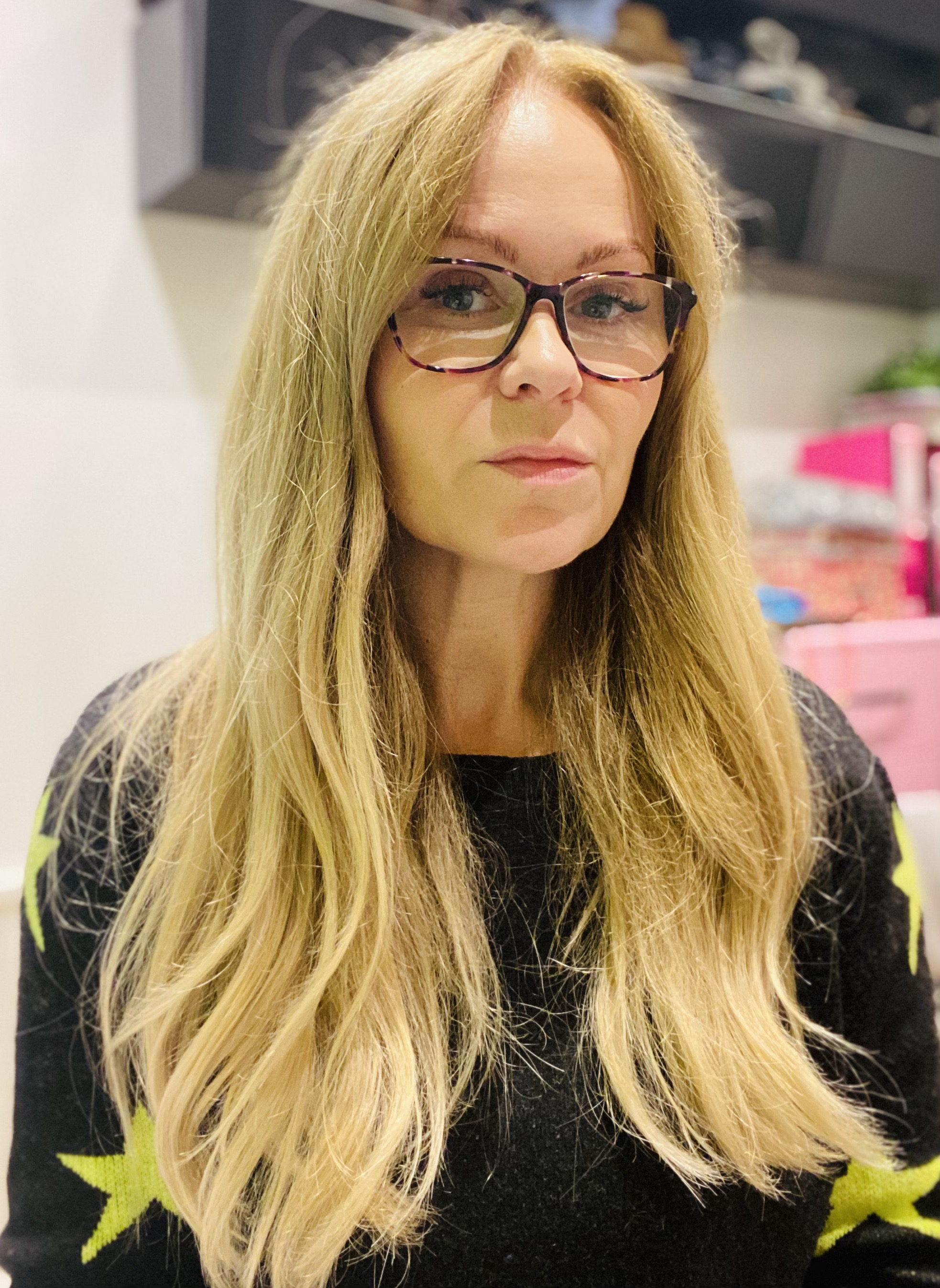 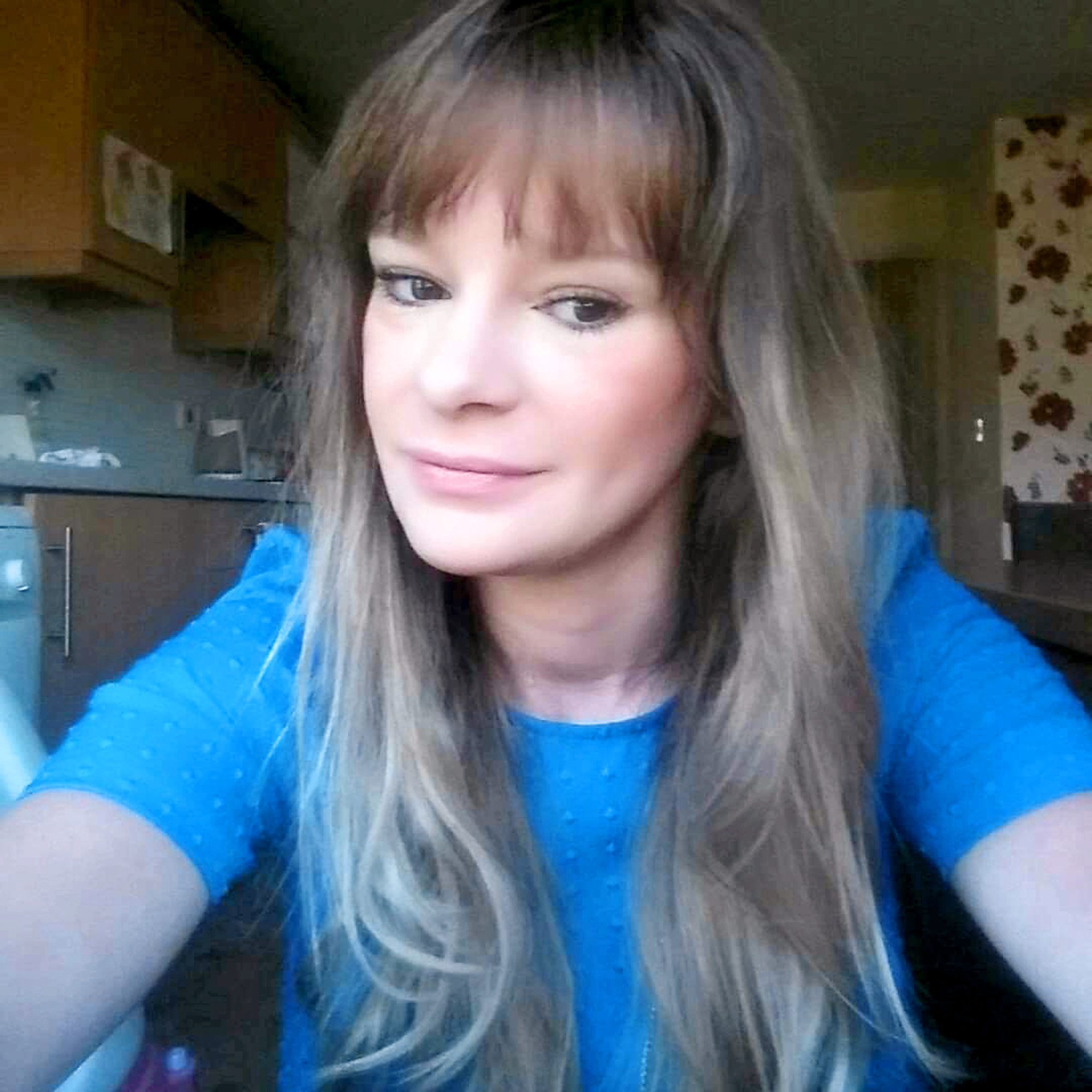 HOW TO GET A HEALTHY GUT

WHAT NOT TO DO: