Home » Music » Joe Cocker's 'Mad Dogs & Englishmen': Inside the Triumph and Trauma of a Legendary Tour

When singer Rita Coolidge attended the premiere of Mad Dogs & Englishmen, the 1971 doc that chronicled the Joe Cocker–fronted tour of the same name, the experience was far from celebratory. “I started shaking and crying and it all came back to me,” she says. “I got up and left and got in my little VW and drove home. My friends were so worried about me that they followed me. I don’t know if I’m over it yet.”

Although it’s become something of a footnote in pop history, the Mad Dogs & Englishmen tour was historic: It captured British soul singer Cocker at the peak of his career, and its joyful blend of gospel, soul, blues, and every other type of Americana powered the double album that documented the 1970 run into the Top 10 (with Cocker’s remake of the Box Tops’ “The Letter” also a hit). It also made a star out of bandleader Leon Russell, who exuded bad-boy cool on screen. But the run of shows was also fraught: An already frazzled Cocker was frustrated that Russell was in command, drugging and partying were daily occurrences, and out of the blue, drummer Jim Gordon, then Coolidge’s boyfriend, punched her so hard that she slammed against a wall.

The saga of that tour — and a tribute concert that reunited many of its participants — is newly told in Learning to Live Together: The Return of Mad Dogs & Englishmen, a doc that will premiere at the Woodstock Film Festival later this month before arriving for a limited theatrical run in October. Directed by Jesse Lauter, the film time-shifts between the 1970 tour (with clips from the first Mad Dogs movie), footage from the commemorative gig at the Lockn’ Festival in 2015, and interviews with the surviving players of the original shows. Also offering insights are Steve Earle and manager Jon Landau, who each caught a Mad Dogs show back in the day, and longtime Rolling Stone writer David Fricke.

But given the often dramatic and sometimes disturbing back story of the tour, what started as a straightforward film about that moment in time and the 2015 reunion became more than that. “While they were filming, they realized there was more meat on the bone than we thought,” says Derek Trucks, whose Tedeschi Trucks Band, co-fronted by his wife Susan Tedeschi, served as the backing band at the tribute gig. Of the sometimes unsettling moments that the movie explores, Trucks says, “It’s a tough place to go, but if you avoid that stuff, it starts to feel disingenuous at times.”

The Mad Dogs tour was chaotic both on paper and in practice. Cocker, already coping with an overwhelming wave of post-Woodstock fame, was told by immigration authorities that he had to tour right away or lose his working papers. Coolidge says the actual reason was the dark underbelly of the sometimes mobbed-up music business. “It wasn’t so much about not working in the States but, ‘If you don’t do this tour, you’ll get your legs broken,’ ” she says. “That was common knowledge in the group — that threats had been made that if Joe didn’t do the tour, he would be hurt.”

With only a week to prepare, Russell was hired to pull together a 10-piece band — and a 10-person group of backup singers called the Space Choir — and rehearse for the 48-show run. Cocker, Russell told RS in 2015, “was pretty wrecked when we started out. I said, ‘Does it sound good to you?’ and he said, ‘It never sounds right to me.’ I didn’t know how to take that. So I said, ‘Shit, I’ll just do whatever I want.’ ” The tour manager, Sherman “Smitty” Jones, was a former pimp, and Cocker was seen tossing down any and every pill given to him on the way to the stage. “It was party-party-party,” says Coolidge, who says she abstained from most of that. “They were having orgies every night. I would hear about them the next day.”

By the end of the shows, Cocker was fried and broke. “Joe was just worn out and so beat up and penniless,” Coolidge says. “The heart went out of him for a while. He just disappeared inside himself.”

The Tedeschi Trucks Band, which had modeled itself after the size and horn-rooted arrangements of that ensemble, had long wanted Cocker to join them onstage and perform cuts from throughout Cocker’s career. All involved had finally settled on doing such a show at Lockn’ in 2014 — part of the festival’s tradition of presenting a special, one-time get-together each year. Cocker bowed out at the last minute, but a few months later everyone knew why; he had been battling lung cancer and died that December. Tedeschi and Trucks decided to proceed with the Mad Dogs & Englishmen tribute plan anyway, to honor both the album and Cocker.

When the notoriously reclusive Russell agreed to come aboard, having previously joined the Tedeschi Trucks Band onstage, others expressed interest. “I was concerned that there wouldn’t be enough of us left alive to make it worth the while,” Coolidge laughs. She also adds, more seriously, “I also knew Leon was having some pretty serious health problems. I was concerned about him being put in a position that would tax his frailties.”

But by showtime, the lineup included former Mad Dogs like Coolidge; singers Claudia Lennear, Pamela Polland, and brothers Daniel and Matthew Moore; keyboardist Chris Stainton; and percussionists Chuck Blackwell and Bobby Torres. (Gordon, currently in prison for killing his mother, was not invited, and the tour’s other drummer, Jim Keltner, respectfully bowed out in light of his disinterest in traveling.) As Tedeschi Trucks booking agent and movie co-producer Wayne Forte says, the criteria for inviting players was “healthy, alive, and not in jail.”

The nearly four-hour Lockn’ show went off with few hitches; Warren Haynes, the Black Crowes’ Chris Robinson, and Widespread Panic’s John Bell filled in for Cocker at various points (Dave Mason also sang lead on his “Feelin’ Alright”). At the last minute, Russell agreed to reprise “The Ballad of Mad Dogs & Englishmen,” the solo Russell studio recording heard in the original doc. Despite his health issues, which led to his death in 2016 after a heart attack, Russell held up for the entire show and, despite his surface crustiness, marveled at the stability of the Tedeschi Trucks lineup compared to the original Mad Dogs crew. “Leon was shocked by how long we’ve been together,” says Tedeschi. “He said, ‘How do you keep nine or 12 people together this long?’ They did it for a year and they had to all take time off.”

During interviews for the documentary, some of the tour’s tangled personal relationships emerged. “There were so many different undercurrents of emotions we weren’t aware of,” says Trucks, “but we could feel it.” Numerous hookups are hinted at. Coolidge, who was in a relationship with Russell before the tour, says the two had overcome their past difficulties. “In the years right after the tour, I’d see him and he would pretend I wasn’t there — he would look right past me,” she says. “He finally relaxed, one or two of his marriages later. Things got resolved over the years.”

When Cocker crashed hard after the tour, some of the criticisms were leveled at Russell, who more or less ran the shows. In Learning to Live Together, Russell, who could be guarded, addresses the backlash he experienced, saying he wished Cocker had come to his defense. “I could definitely sense resentments for it, like he almost couldn’t win in that situation,” says Lauter. “Doing this show was almost like his way of healing his relationship with Joe. That’s why I titled the movie Learning to Live Together. Everyone had musical and romantic and business relationships, and you pick up on how everyone was trying to figure it all out back then.”

Adds Lauter, “When it comes down to it, the film is ultimately a story about the great generational bridge and healer that is music. We knew it the moment the band started playing ‘The Letter,’ the first song at the first rehearsal, and you could hear Claudia’s backing vocal cut through the Space Choir. All the resentments, past drama and trauma were out the window.”

The movie’s dramatic highpoint arrives when Coolidge recalls the moment Gordon punched her in a hotel, after he’d invited her to step outside a room where a party was going on. “I know people are tired of talking about the #MeToo movement,” Coolidge says, “but it was very real, even back then, and it’s important to talk about that stuff. As a child I was never hit by an adult, or by anybody. Jim was four times my size and I was 100 pounds; he could have pinched me and it would have been enough. I had a huge shiner and I had to go onstage with it. Everybody knew it. I needed them to be part of my protection since I couldn’t do it myself.”

Forte says there was talk of how much of the backstage drama, including Coolidge’s unsettling story, to include. “There was a lot of conversation going back and forth: Is all that going to be a potential downer?” he says. “You don’t want to have people walk out of the movie depressed. But I, for one, felt it’s part of the story. It needed to be in there.” Adds Tedeschi, “It’s real life. Things happen and people like to know about someone who has gone through those things and made it through the dark side. It’s not all bad and dark.”

Transforming footage old and new into a feature film proved to be a daunting task, which accounts for the six-year delay between concert and movie. Unable to find a big-money investor, the producers raised more than $700,00 from various parties, then spent two years clearing the rights to songs by Bob Dylan, the Beatles, and others whose tunes were performed on the Mad Dogs & Englishmen album. Lauter had hoped to include some of the rumored hundreds of hours of outtakes from the original doc (which Russell, in the movie, wryly calls “$300 worth of really X-rated stuff”), but those were never unearthed. (Whether those reels were misplaced or perished in the 2005 fire at Universal Music’s storage facility remains unclear.) Learning to Live Together only includes portions of the Lockn’ show, but Trucks says a live album of the complete show will be released at some point.

Coolidge, at press time, had not yet seen the film. But it seems unlikely that her traumatic experience at that premiere, 50 years ago, will repeat itself. “We’re a lot older, so there were no triggers,” the now–76-year-old singer says. “I didn’t feel like I was really back there. Hopefully you gain some wisdom and grace with age. Looking at it from this part of my life, I really valued the experience. I remembered the good parts and have no regrets.” 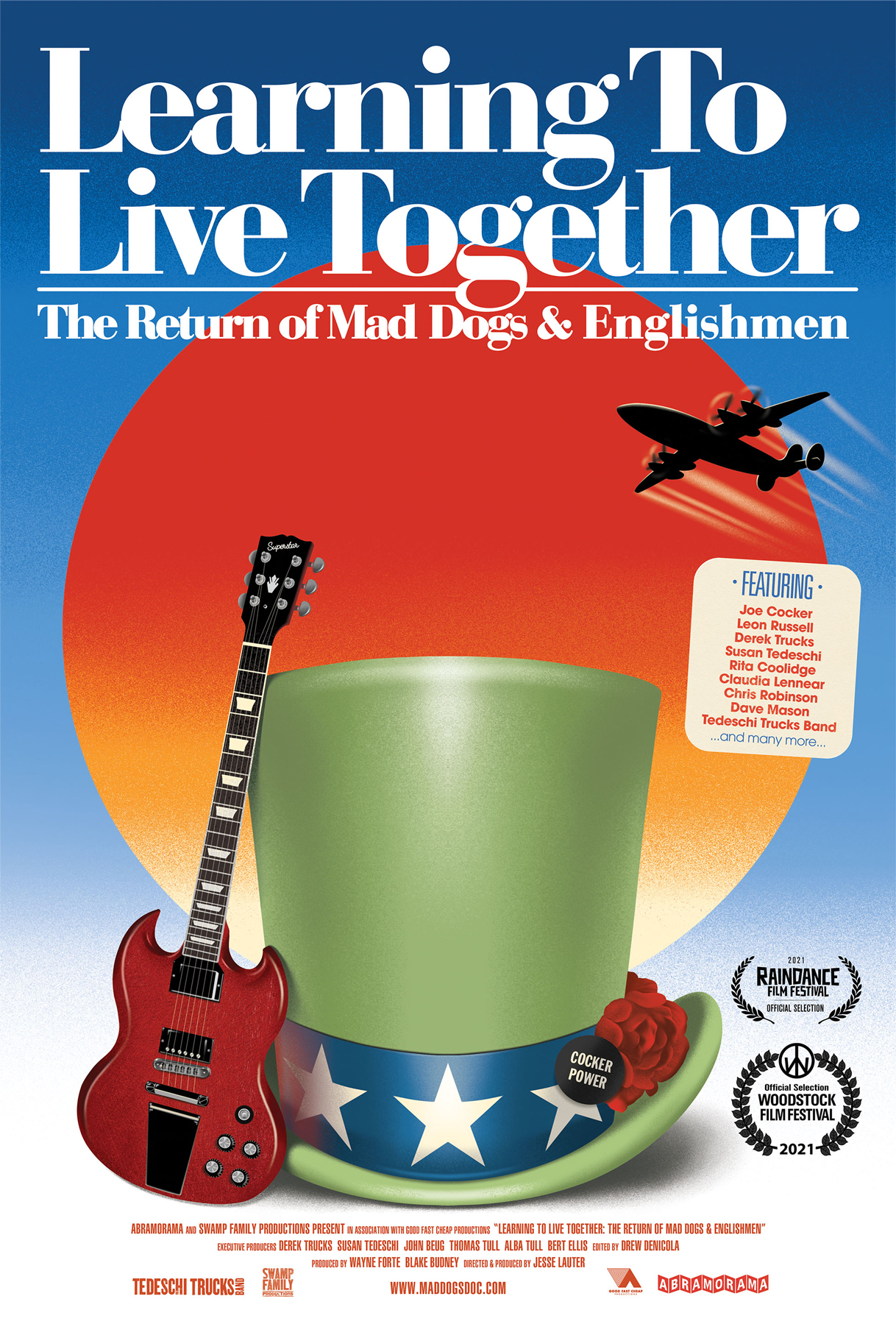