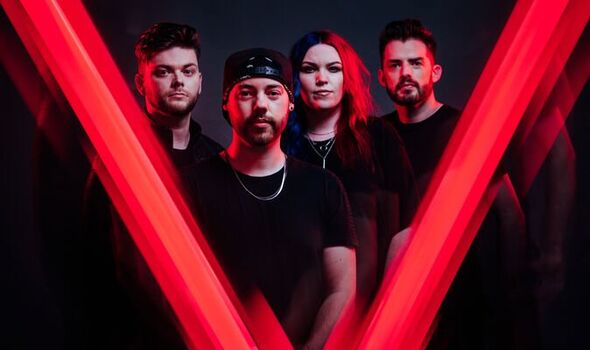 Stone Broken are in the midst of their UK tour right now, but they are still keen to give their fans worldwide a glimpse of what they might be missing.

The acoustic version of The Devil You Know, which can be watched below, strips back the song’s catchy riffs to expose the emotional lyrics within – something that is important to the band when they delve into their back catalogue for an acoustic treat.

The Devil You Know is a particularly poignant track for the band’s singer, Rich Moss, who recently told Express.co.uk how it demonstrates that people don’t always know what is going on inside someone’s mind.

“When we were writing the song it was during Covid where we felt our most vulnerable as a band,” Moss revealed. “Everything had come to a stop, there were no shows, no tours, we didn’t know what to expect or even think at times. Musically the song is very upbeat but the lyrics are quite dark in comparison, which we feel signifies a feeling of losing control.”

He added that The Devil You Know highlights that “maybe from the outside looking in everything is fine, but internally things could be quite hectic and frantic”.

This blinding song was then borne from the band’s issues. He said: “We felt we needed to get our frustrations and things we were dealing with internally, out in this song.”

The acoustic version of the track is a triumph for the band, who don’t compromise on their talent and composition even while unplugged. But, it’s not always an easy feat for Stone Broken.

“[Acoustic compositions] are challenging at times,” Moss confessed. “But we enjoy doing acoustic versions as we feel it gives the song almost a new identity, we try and create an alternative version of the song rather than just an acoustic version and give the song different moments that don’t feature on the original version.”

He added: “We also have space to do things vocally that we wouldn’t usually have when there’s a full band going on. Sometimes the challenge is keeping the energy when it’s not full electric.”

Despite the challenging nature of transforming an electric song into an acoustic one, Moss explained how he felt it was “important” for the fans to see how malleable the band’s tracks are.

Moss said: “We think it shows that a song can be represented in many ways and people might relate to a song completely differently when it’s stripped back to its bare essentials. An acoustic version is essentially a song in its rawest form and can highlight the significance of the lyrics and the story being told.”

Because of the band’s love for acoustic versions of their songs, could an acoustic album be on the horizon?

“We have actually spoken about doing an acoustic album,” Moss confessed. “Or maybe an EP. But we think it would have to be a right place right time scenario.”

Stone Broken – Revelation is out now.