Let’s go back to a time before Donald Trump was president, before the pandemic took over the lives of millions globally, and before the world seemed to go to hell in a handbasket: 2015.

During this fever dream of a time, Miley Cyrus was considered a style icon, Nicki Minaj was climbing the pop charts, and the two happened to cross paths at the 2015 MTV Video Music Awards. (Remember when MTV played music videos and not “Ridiculousness” all the time? We do.) There was an onstage moment during which Nicki Minaj — who was accepting the award for Best Hip Hop Video for “Anaconda” — looked dead at Miley Cyrus, asked, “What’s good?” and proceeded to walk her way. This wasn’t just a bit for the show or an impromptu moment. This was a very real, very raw exchange.

The feud between the two singers went much deeper than what many fans saw during that heated moment. So, what really happened between Miley Cyrus and Nicki Minaj? Keep reading to find out.

Nicki Minaj was not happy about a Miley Cyrus interview 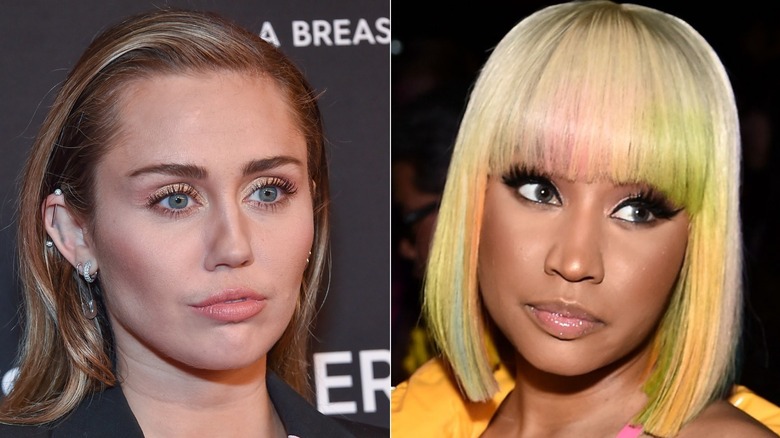 The beef between Nicki Minaj and Miley Cyrus started when Cyrus dissed Minaj in an August 2015 interview with The New York Times. During the interview, Cyrus commented on Minaj’s anger that her “Anaconda” video did not get a “Video the Year” nomination and the drama that formed when Taylor Swift directly responded to Minaj’s frustrated tweet, per MTV News. “What I read sounded very Nicki Minaj, which, if you know Nicki Minaj is not too kind,” Cyrus said. “It’s not very polite,” she continued. “It became Nicki Minaj and Taylor in a fight, so now the story isn’t even on what you wanted it to be about.” Although the drama had nothing to do with Cyrus, Minaj felt that her comment to the NYT was a personal affront to her.

“I saw [Miley] just looking at me, with her face screwed up, and I thought, What the!” Nicki said to The New York Times Magazine in September 2015. “The fact that you feel upset about me speaking on something that affects Black women makes me feel like you have some big balls.” She added, “You’re in videos with Black men, and you’re bringing out Black women on your stages, but you don’t want to know how Black women feel about something that’s so important? Come on, you can’t want the good without the bad,” she slammed.

Neither Cyrus nor Minaj has mentioned their feud since 2019, per Billboard, but they’ve made no public show of reconciliation, either.