More than 2 MILLION pounds of rock was ejected from asteroid during NASA’s DART mission: Debris created a tail that stretched tens of thousands of miles behind Dimorphos

More than two million pounds of dusty rock flew into space during NASA’s epic DART mission, creating an illuminated tail that stretched thousands of miles behind the ‘moonlet’ Dimorphos.

The Double Asteroid Redirection Test (DART) on September 26 proved humans could alter the trajectory of a hazardous asteroid headed for Earth.

The latest data reveals that the momentum transferred when DART hit Dimorphos was roughly 3.6 times greater than if the asteroid had absorbed the spacecraft and produced no ejecta – indicating the ejecta contributed to moving the asteroid more than the spacecraft did.

Andy Cheng, DART investigation team lead, said the findings are ‘good news’ because the kinetic impact on the target was enough to change the asteroid orbit.

And in the case of this mission, the orbit of Dimorphos was altered by 33 minutes – NASA’s initial goal was to shave off at least 10 minutes. 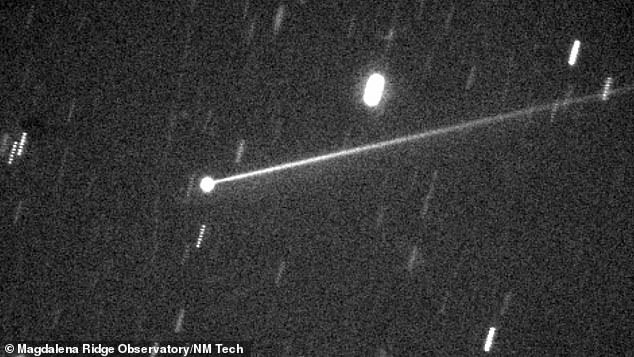 The DART spacecraft smashed into Dimorphos while traveling 14,000 miles per hour and stuck the asteroid head-on.

The space probe used kinetic impact, which involves sending one or more large, high-speed spacecraft into the path of an approaching near-earth object.

Before the impact, Dimorphos took 11 hours and 55 minutes to circle its parent asteroid, Didymos.

Andy Rivkin, DART investigation team co-lead at the Johns Hopkins Applied Physics Lab (APL), said in a statement: ‘We know the initial experiment worked. Now we can start to apply this knowledge. 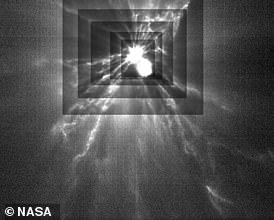 ‘Studying the ejecta made in the kinetic impact – all of it derived from Dimorphos – is a key way of gaining further insights into the nature of its surface.’

Observations before and after impact show the two cosmic objects have similar makeup and are composed of the same material linked to ordinary chondrites, identical to the most common type of meteorite to impact the Earth.

These measurements also took advantage of the ejecta from Dimorphos, which dominated the reflected light from the system in the days after impact.

Even now, telescope images of the Didymos system show how solar radiation pressure has stretched the ejecta stream into a comet-like tail tens of thousands of miles in length.

Using this information, scientists assumed Didymos and Dimorphos have the same densities and calculated the momentum transferred when DART hit Dimorphos.

Predicting the momentum transfer is key to the future planning of other kinetic impact missions because experts need this data to develop the size of the craft required to push the asteroid off its orbit and determine lead time.

‘Momentum transfer is one of the most important things we can measure because it is the information we would need to develop an impactor mission to divert a threatening asteroid,’ said Cheng, who is also with Johns Hopkins APL. 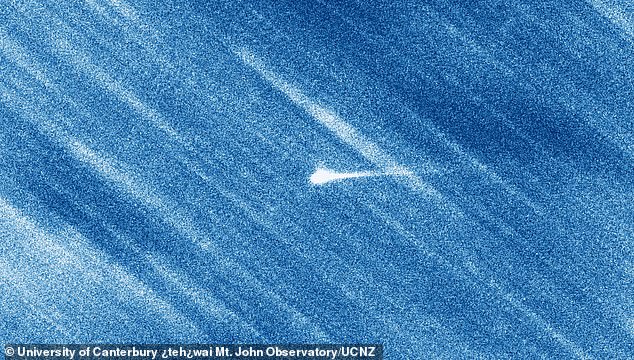 The impact was captured by telescopes on the ground. Didymos appears to light up in this image snapped by the Ōtehīwai Mt. John Observatory in New Zealand

‘Understanding how a spacecraft impact will change an asteroid’s momentum is key to designing a mitigation strategy for a planetary defense scenario.’

DART ‘is something of a replay of Bruce Willis’s movie, ‘Armageddon,’ although that was totally fictional,’ Nelson said in a November interview referring to the 1998 film that saw teams travel to an asteroid heading to Earth with the hopes of destroying it before impact.

Didymos and Dimorphos were making their closest approach to Earth in years, passing at a distance of about 6.7 million miles from our planet, which made them a suitable target for the mission. 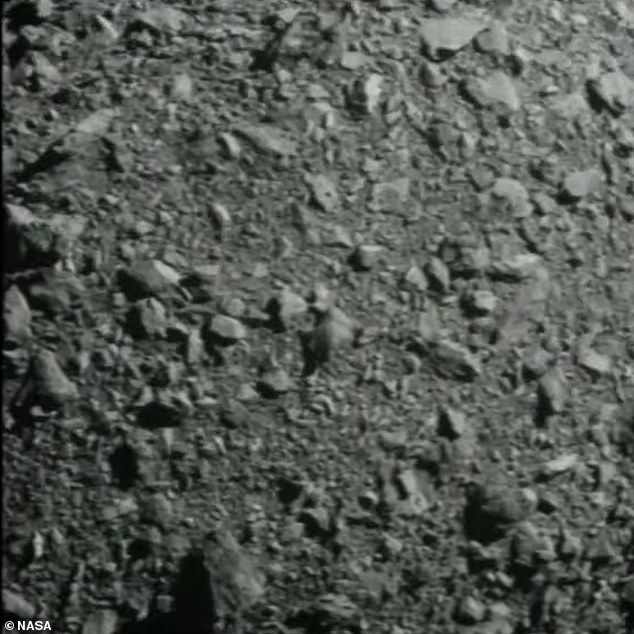 Moment of impact: The DART spacecraft smashed head-on with the asteroid and shared the last image before it blew into bits

An asteroid the size of Dimorphos could cause continent-wide destruction on Earth, while the impact of one the size of the larger Didymos would be felt worldwide.

NASA emphasized that the asteroids pose no threat to our home planet, but they were chosen because they can be observed from ground-based telescopes here on Earth.

The European Space Agency (ESA) is launching a mission in 2024 that will send a probe to Dimorphos and Didymos to study the pair in greater detail.

Could NASA now stop a doomsday asteroid from hitting Earth?

And the first images of DART’s asteroid crash captured by the tiny LICIACube satellite show the incredible moment NASA’s spacecraft smashed into Dimorphos and its bright, messy aftermath

It comprises a satellite that’s crashed into the small moonlet asteroid Dimorphos, which orbits a larger companion asteroid called Didymos.

The satellite intentionally crashed into the asteroid and slightly changed the latter’s orbit.

Dimorphos is about 525 feet in diameter, and although it doesn’t pose a danger to Earth, NASA wants to measure the asteroid’s altered orbit caused by the collision.

Post-impact observations from Earth-based optical telescopes and planetary radars measured the change in Dimorphos’ orbit around Didymos, which found the trajectory was altered by 33 minutes.

This demonstration of planetary defense will inform future missions that could one day save Earth from a deadly asteroid impact.