What could be a nearly 400-year-old butterfly has been discovered pressed between the pages of an ancient library book at Cambridge University.

The perfectly preserved specimen, thought to be a small tortoiseshell, was found inside a copy of England’s earliest insect book, Theatre of Insects, published in 1634.

The butterfly could be as old as the volume itself, according to experts at Trinity Hall, Cambridge University, which has had the book in its collection since 1996.

The beautiful specimen is as ‘colourful as the day it was pressed between the book’s pages’, right next to its accompanying illustration, Trinity Hall revealed.

Although examples of plant specimens being pressed into books are fairly common, it is rare to find a pressed insect. 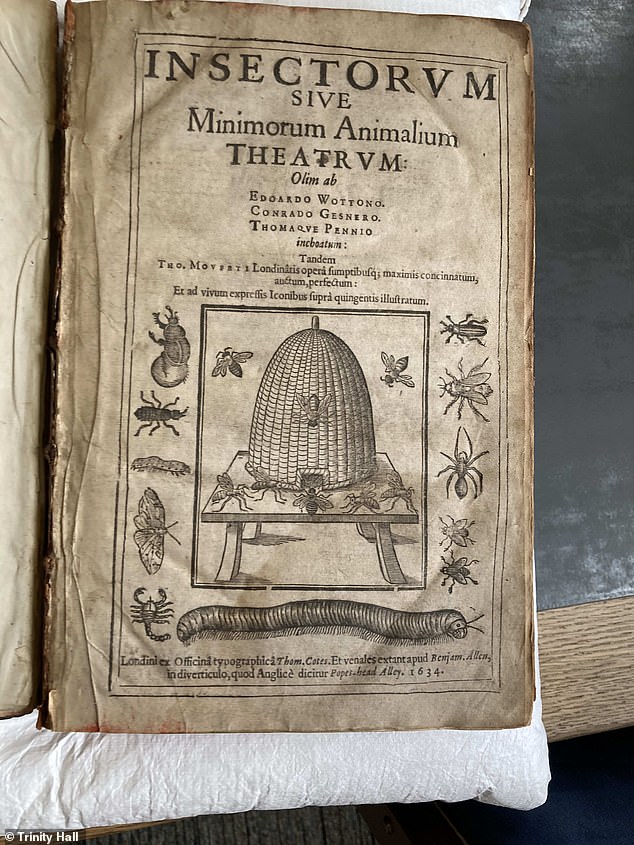 The book’s true title is a bit of a mouthful: Insectorum sive Minimorum Animalium Theatrum

The discovery was made by Trinity Hall’s head librarian Jenni Lecky-Thompson.

‘I was looking at some of the fantastic animal books we have and I was going through the pages of the wonderful Theatre of Insects, or Insectorum sive Minimorum Animalium Theatrum to give it its true title,’ she said.

‘While looking through our copy I chanced upon a butterfly, a small tortoiseshell I think, next to its accompanying image.

‘There is a striking similarity between the woodcut and butterfly, which of course was the intention so that the various species could be identified by the amateur insect enthusiast.

‘It is relatively common to find botanical specimens inside old books, but unusual to find an insect specimen.’

No one can know for sure exactly when, or by whom, this butterfly was pressed in the folds of the book, nestled next to the black inked 17th century woodcut image of itself.

But it’s certain to have been there before it became part of the Trinity Hall collection.

‘This one could have been put there by the first owner back in the 17th century, and if so it is amazing that it has survived there for so long,’ said Lecky-Thompson.

‘I’ve had some discussion with rare books experts and they think it most likely that the butterfly has been inside the book for centuries.

‘It definitely wasn’t placed there by anyone since its arrival at Trinity Hall. As it is a valuable rare book it is kept securely locked away in a bookcase!’ 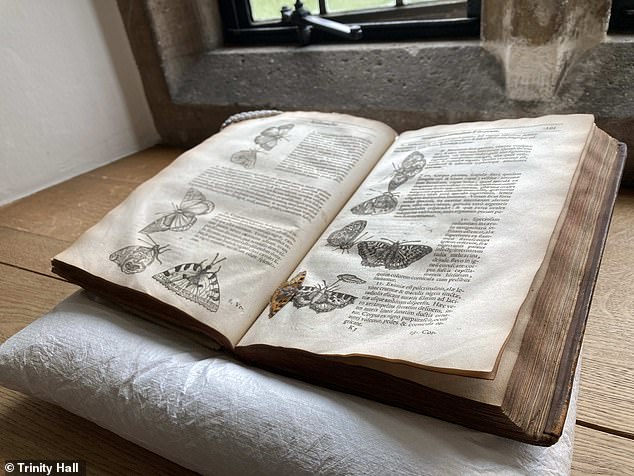 Although examples of plant specimens being pressed into books are fairly common, it is rare to find a pressed insect

Will Beharrell, librarian of the Linnean Society, a historic British organisation devoted to natural history, called the finding ‘amazing’.

‘We see this all the time with plant specimens… but insect samples are much less common (probably for practical reasons!)’

One exception was British naturalist Alfred Russel Wallace (a colleague of Charles Darwin), who used to affix insect samples to book pages ‘with a sort of paste’, Beharrell added.

Lecky-Thompson has found some contemporaneous advice on how to preserve insects, showing that the practice has been carried out for centuries.

In Musei Petiveriani (1695), London apothecary James Petiver wrote: ‘Butterflies must be put into your Pocket-Book or any other small printed book as soon as caught after the same manner as you dry plants.’ 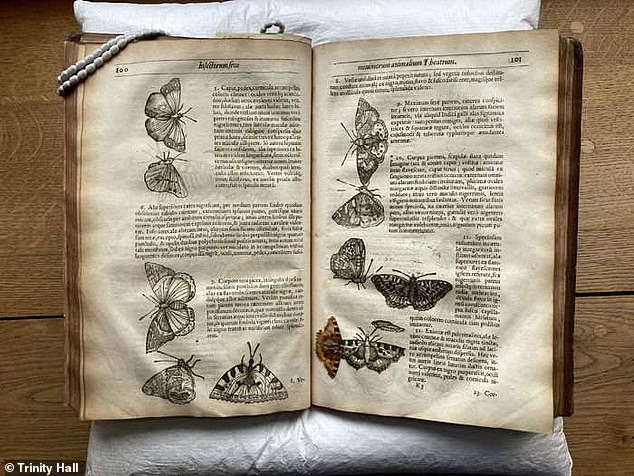 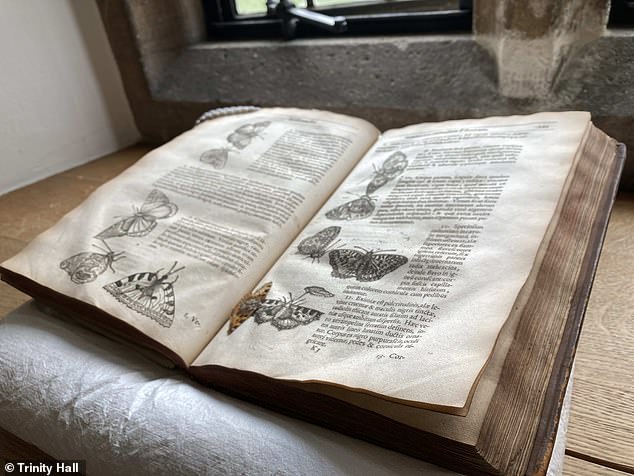 The Insectorum Sive Minimorum Animalium Theatrum (Theatre of Insects) published in 1634, is the first book published in England which is exclusively about insects

Theatre of Insects is the first book published in England exclusively covering insects, their appearance, habits and habitats, as well as arachnids and worms.

This particular copy was donated to Trinity Hall by the family of former college undergrad Lawrence Strangman, a passionate book collector, who died in 1980.

Strangman’s eclectic collection was presented to the college in 1996 by Lawrence Strangman’s niece, Geraldine Essayan, in his memory.

But Strangman himself was almost certainly unaware of the butterfly, according to Lecky-Thompson.

‘Although the book came to the library in the 1990s, the previous owner [Strangman] was an antiquarian book collector,’ she said.

‘Pressing insects inside books is not something most collectors would do,’ Lecky-Thompson said.

‘Collectors are preservationists, but of books – not of foreign objects which might affect the books.’ 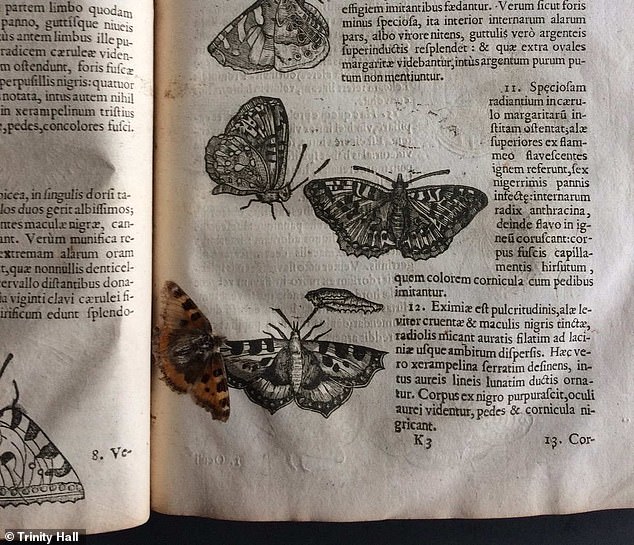 The buttery, believed to be a small tortoiseshell was inserted right next to its accompanying image in the historic copy 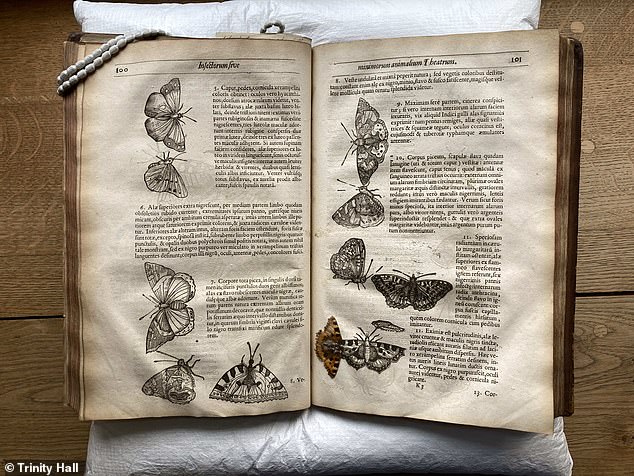 THE THEATRE OF INSECTS

The Insectorum Sive Minimorum Animalium Theatrum (Theatre of Insects) has a complex history and is the product of various authors, according to Trinity College.

When Swiss physician and naturalist Conrad Gesner died in 1565, he left among his papers an unfinished book on insects, which was eventually sold to his assistant Thomas Penny.

Penny acquired the notes of English zoologist Edward Wotton, and began combining Gesner’s and Wotton’s information before his death in 1589.

Penny’s manuscript passed to his friend Thomas Moffett who enlarged and completed the work.

Negotiations for its publication fell through and the book was still in manuscript form when Moffett died in 1604.

The manuscript remained in the Moffett family for many years, until it was sold to French physician Théodore Turquet de Mayerne (1573–1655), who finally published it in 1634.

To reduce costs, the book contains woodcuts, rather than the more expensive engraved illustrations.

The oldest form of printmaking, woodcut is a relief process in which knives and other tools are used to carve a design into the surface of a wooden block.