Home » Science » A cyberpunk scene at SpaceX's launch facilities: A robot dog inspected the wreckage of a Starship rocket prototype

SpaceX created a futuristic tableau at its Texas rocket-testing facilities on Thursday, when a robo-dog wandered the wreckage of its latest Starship prototype.

SpaceX launched the rocket prototype, called Starship serial No. 10, or SN10, on Wednesday. Like the last two prototypes before it, SN10 climbed to nearly 33,000 feet above the company’s facilities in the town of Boca Chica. Then it shut off its engines and plummeted to Earth in a belly-flop position, controlling its fall with four wing flaps.

Unlike its predecessors, which both slammed into the ground and exploded immediately, SN10 successfully re-fired its engines to flip itself upright and touch down softly on the ground. But then it exploded spectacularly 10 minutes later. 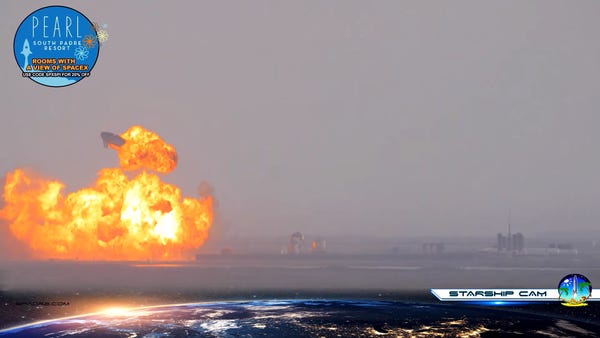 With the air cleared and the roads reopened, photographers and SpaceX fans flocked to the company’s facilities on  Thursday morning to watch the clean-up from a distance. That’s when they spotted a fascinating four-legged robot wandering the wreckage.

Spadre.com shared videos of the agile bot on Twitter.

The life-like machine is a Boston Dynamics “Spot” robot dog, which SpaceX has apparently renamed Zeus, according to photos that show the name printed across a red doghouse where the robot lives.

Zeus has been spotted inspecting SpaceX landing sites before. It’s not clear what exactly the mechanical pooch was doing at the SN10 explosion site, but Zeus is likely outfitted with cameras and sensors to collect data, since approaching wrecked rockets can be unsafe for humans.

SpaceX did not respond to Insider’s request for further details.

The rocket Zeus was inspecting is designed as the upper stage of a two-part system; a roughly 23-story booster called Super Heavy would one day heave the Starship spaceship toward orbit. But eliminating these explosions from the vehicle’s landing process is crucial, since SpaceX is designing Starship and Super Heavy to be fully and rapidly reusable. A spaceship that blows up after it lands is, of course, tough to relaunch.

If the system works, though, Starship-Super Heavy could slash the cost of reaching space 1,000-fold, since it would eliminate the need to build new rockets and spaceships for each spaceflight. Musk wants to eventually construct a fleet of reusable Starships to power round-the-world hypersonic travel on Earth, fly astronauts to the moon, and one day carry people to Mars.

Musk has said that he is “highly confident” SpaceX will launch an uncrewed Starship to Mars in 2024, followed by a crewed mission in 2026.