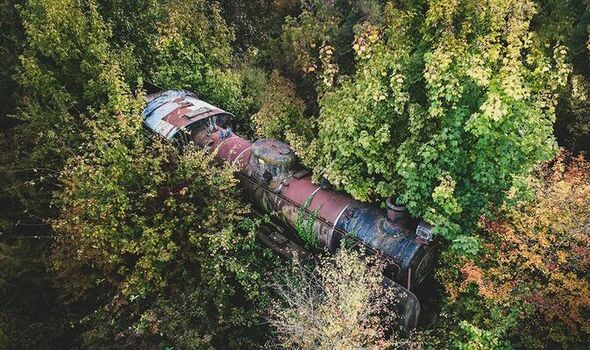 The phenomenon of urban exploration has taken the internet by storm in recent years, with adventurous amateur flimakers and photographers giving us a fascinating peek inside forgotten buildings and hidden curiosities across the UK and beyond.

While the practice can be dangerous and is, in many cases, against the law, intrepid explorers have taken us into all manner of crumbling sites in 2022, from creepy former prisons to abandoned hospitals.

One urban explorer even showcased an abandoned train burried deep in the Suffolk woodland.

Here are some of the photographs published online that have wowed viewers in the past 12 months.

When Steve Liddiard, 36, heard rumours of a mysterious “Harry Potter-style” engine hidden in woodlands, he travelled from his home in Swansea, south Wales the 260 miles to the remote location near Sudbury, Suffolk.

Steve, a senior pathology informatics for the NHS, found the locomotive completely hidden behind overgrowth.

Speaking after the discovery in October, the urban explorer said: “The steam train was one of my best finds, hidden in plain sight.

“Locals seem to know of it, but a total mystery as to where it came from, some stories here and there, but it’s a really strange one.

“It’s a Harry Potter Hogwarts-style train, but it’s a bit of a mystery as to why it’s there and sitting on real train tracks.

“There are some rumours that it was bought with purpose of renovating it but nothing concrete.”

The train was built by a Scandinavian company in around 1950. It was made to withstand the brutal Finnish winters, but now sits alone on this abandoned piece of track and the elements have corroded it.

Dubbed one of America’s most “haunted” places, the infamous Eastern State Penitentiary in Philadelphia housed the likes of Al Capone.

An explorer took chilling photographs in June which captured the eeriness of the long-closed jail.

With its 142-year history of torture, isolation, disease, murder and madness, the crumbling penitentiary is thought to be haunted and now hosts Halloween events.

“I spent about three hours inside Eastern State exploring cell to cell and photographing everything from the crumbling walls to broken stools and beds and peeling paint,” said the explorer, who asked not to be named.

When an urban explorer snuck into an abandoned hospital in Texas in January, they were alarmed by its creepy contents.

Said to be one of the most haunted places on earth, Yorktown Memorial Hospital has become a hotspot for thrill-seeking ghost hunters around the globe since it closed in 1980.

It had served for 30 years as a rehabilitation centre for those suffering from drug and alcohol abuse.

An urban explorer from Kent, who was on a “dark tourism” trip to USA in January, snapped spooky dolls, old furniture and abandoned toys inside the building.

Photographs show the eerie dolls which, legend has it, talked in the hospital.

Another urban explorer shared pictures of a fascinating, abandoned cottage, which lies isolated from civilisation on the outskirts of Wales.

The cottage, dubbed the “American Cottage” was constructed in 1823. Newspapers found in the house date back to September 1970 but it has been empty for decades.

Kyle Urbex, from Yorkshire, explored the property. He said: “After making the long trip up the track to this isolated cottage I was lucky enough to find an open window straight in.

“In the pitch black I found this quite eerie, given the fact I was essentially in the middle of nowhere.

“A slightly odd in places property, with a toilet installed at the foot of a staircase with nothing blocking it like a wall or a door and half a staircase going up to the roof.

“Once inside I discovered everything from family photos clinging to the walls, old toys in a box that would have been played with by children at some stage.”

Urban explorers visited a once busy petrol station on the M1 near Junction 22 for Markfield, Leicestershire.

It has been closed for several years and the adventurers felt an eerie atmosphere around it in early December.

They peeped inside outbuildings, like the old car wash and storage containers.