Ever wondered what you would have looked like during the Viking Age? AI ‘Time Machine’ transforms your photos into hyper-realistic images from history

If you’ve ever wondered what you would have looked like as a Viking, a Roman warrior or a medieval knight, look no further.

Genealogy website MyHeritage has released ‘AI Time Machine’, an online tool that can reimagine you as if you were from another historical era.

The new AI tool, available on desktop and mobile web browser, turns personal photos from your phone or computer into ‘hyper-realistic’ images.

Anyone can see themselves as an ancient Greek warrior, an Egyptian pharaoh, a medieval knight, a Victorian lady, a hippie from the 1960s and much more. 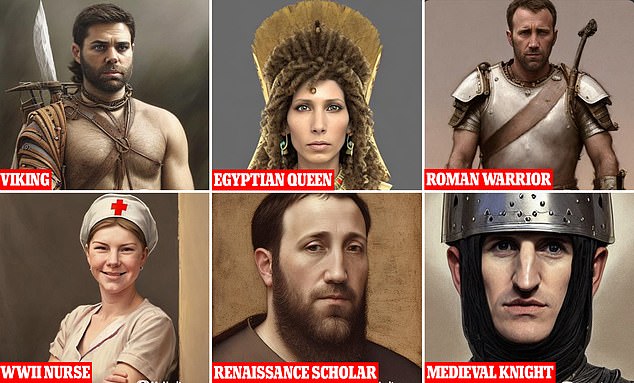 AI Time Machine users can see themselves as an ancient Greek warrior, an Egyptian pharaoh, a medieval knight, a WWII nurse and much more 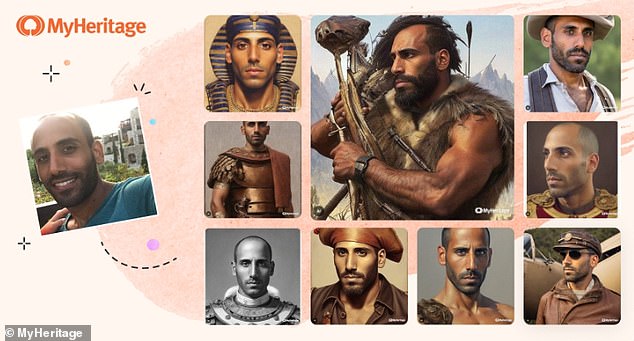 Here, AI Time Machine user ‘Nathan’ appears reimagined as an Egyptian pharaoh, a Viking, a Roman army general and more. Left is one of the original input images

AI Time Machine uses text-to-image artificial intelligence (AI) technology to create photorealistic images of a person as he or she may have looked in different periods in history.

It is based on a deep learning, text-to-image model released in 2022 called Stable Diffusion, and personalization technology licensed by MyHeritage from Astria, an company specializing in AI image generation.

Using anywhere between 10 and 25 photos of one person, AI Time Machine constructs a model of that person in a variety of poses and settings that are different from the original input photos.

Then, using the predefined themes set in different eras, it synthesizes ‘hyper-realistic’ images of the person as a historical figure.

MyHeritage specialises in what is known as deepfake technology – a form of synthetic media where a person in an existing image or video is modified or replaced with someone else’s likeness.

Deepfakes are not without controversy, however – a growing cause of concern is their ability to contribute to the spread of fake news, misplaced identity and even fraud.

Gilad Japhet, founder and CEO of MyHeritage, who tried out the tool himself, said AI Time Machine is a ‘cool new way to connect people to their family history’ by making them appear similar to their ancestors.

‘Over the past three years we released many successful features that use the power of AI to bring historical photos to life,’ he said.

‘AI Time Machine is a new twist on this theme, inviting you to travel to the past and see yourself as you might have looked at the time of your ancestors.’

To use AI Time Machine, you need to head to the tool’s webpage and upload 10 to 25 photos of a single person, taken on different days and in a variety of settings, poses and angles.

The subject can be yourself or anyone else, but all the uploaded photos have to be of the same person.

If you’re trying the tool with photos of someone else, the company wants your to act ‘responsibly’ by getting permission from them.

It also asks all users not to make fun of politicians by adding photos of Putin, Biden, Trump – and that strictly no photos of Nazis are allowed either.

MyHeritage also warns that nudity, swimsuit photos or photos of minors are not permitted – ‘AI Time Machine must not be used on children’.

If you decide to back out at this stage, it says photos that are uploaded without completing sign-up ‘are automatically deleted to protect your privacy’.

For those who proceed with the sign-up, a model of the chosen individual is created and cast as in dozens of predefined ‘themes’ set in different historical eras. 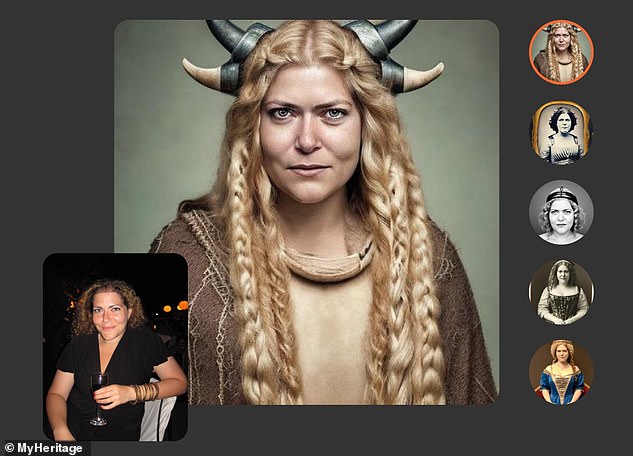 Maya (original input bottom left) appears as a variety of ‘themes’, including a Viking (main image) 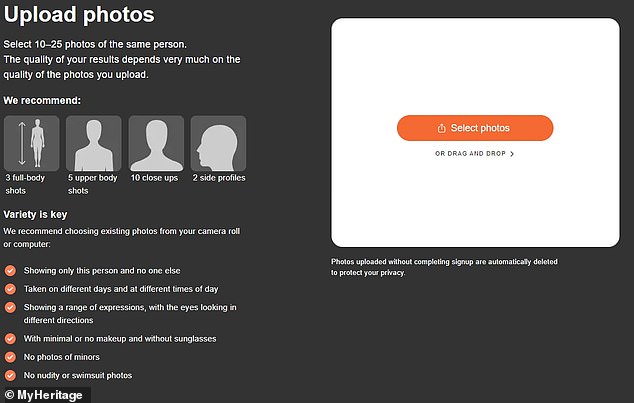 To use AI Time Machine, you need to head to the tool’s webpage and upload 10 to 25 photos of the subject, taken on different days and in a variety of settings, poses and angles

Watermarks are added to all images generated by the AI to distinguish them from authentic photos, which could otherwise contribute to misinformation online.

It typically takes between 30 minutes to two hours to create the results from the original input images; therefore, users will get an email when they’re ready. 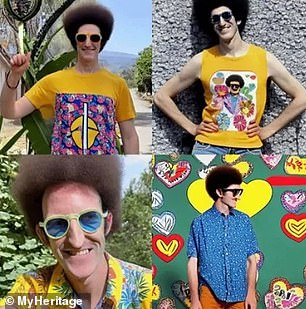 Gilad Japhet, founder and CEO of MyHeritage, reimagined as a 1960s hippie

The feature is free at launch for a limited introductory period (with a limit of one model and 50 themes per user, equaling a total of 400 images).

However, past this limit it will become a paid feature. MyHeritage said it will reveal exact pricing details in the near future.

AI Time Machine is the newest AI-based photo tool on MyHeritage, the Israeli genealogy platform that launched in 2003 and has soared in popularity since. 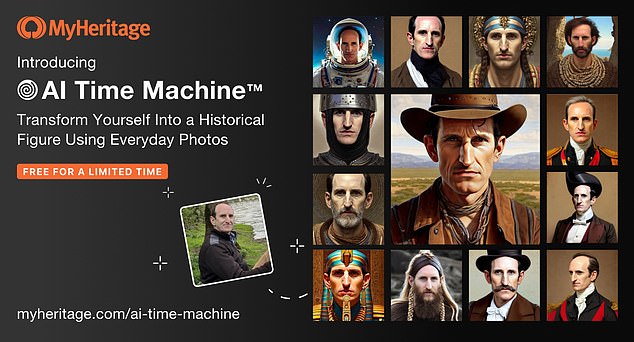 Gilad Japhet as multiple historical characters. He said AI Time Machine lets you ‘travel to the past and see yourself as you might have looked at the time of your ancestors’

MyHeritage is well known for web services and products such as saliva-based DNA testing kits that claim to reveal ‘the ethnic groups and geographic regions you originate from’.

Anyone can use the tool on the Deep Nostalgia webpage by uploading or drag-and-dropping an image – although, likewise, to see the results you’ll need a MyHeritage account.

In 2020, the firm released both the MyHeritage Photo Enhancer and MyHeritage In Color, which respectively increase the resolution and colourises black and white and faded colour photos.

AI TOOL APPEARS TO BRING THE DECEASED BACK TO LIFE

Anyone can use the tool on the Deep Nostalgia webpage by uploading or drag-and-dropping an image – although to see the results you’ll need a MyHeritage account.