Ostrich eggshell beads discovered in eastern and Southern Africa dating back 50,000 years are almost IDENTICAL – indicating there was a social network spanning 1,800 miles across the continent

Almost identical beads made from ostrich eggshells have been discovered by researchers in eastern and southern Africa that date back more than 50,000 years.

The jewellery has been found covering an area of about 1,800 miles, suggesting a social network that linked Stone Age people across the continent.

This would make it the ‘world’s oldest social network’ that connected different cultures, according to a team from the Max Planck Institute in Germany.

As well as being part of a cultural exchange, they are the world’s oldest fully manufactured ornaments, with humans transforming the shells to make the beads. 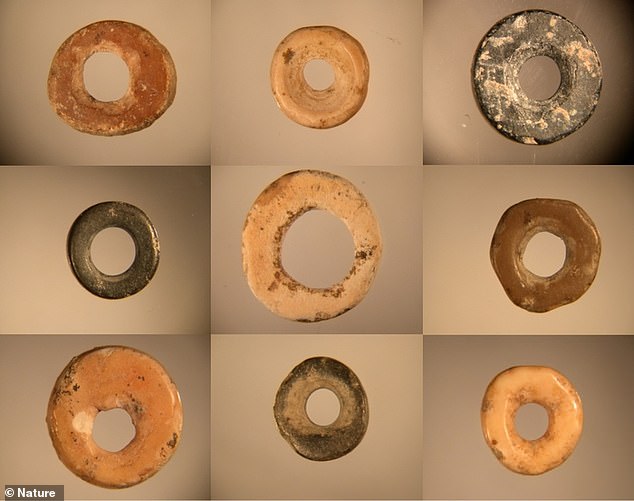 Almost identical beads, made from ostrich eggshells, have been discovered by researchers in eastern and southern Africa, and they span more than 50,000 years 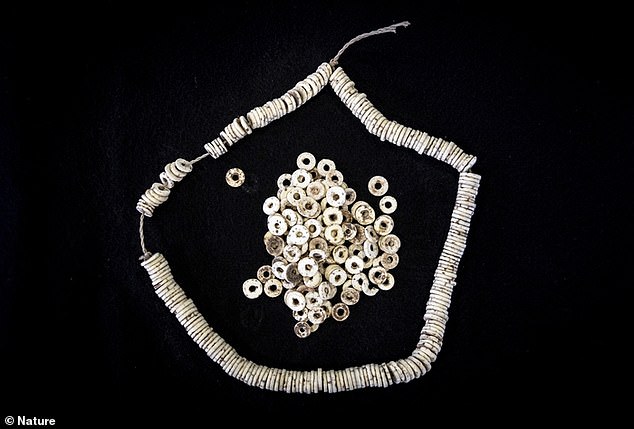 The jewellery has been found covering an area of about 1,800 miles, suggesting a social network that linked stone age people across the continent

Humans evolved in a patchwork of semi-connected populations across Africa, according to researchers.

Developing an understanding when and how these groups connected is critical to interpreting our present-day biological and cultural diversity.

Little is known about the exact timing of these interactions, the cultural context of these exchanges or the mechanisms that drove them apart.

This was via a regional network, a connection that breaks down 33,000 years ago.

The anthropologists took more than a decade to make the world’s largest ever database of ostrich eggshell beads.

Their database included 1,500 beads from the last 50,000 years, dug up at 31 sites across southern and east Africa.

By comparing the diameter and shell thickness of the beads, they found people in each of the two groups were using beads that were almost identical.

This would have made it the oldest social network ever identified by experts.

Signs of the network had disappeared by 33,000 years ago, which is likely to have been triggered by dramatic climate change, they explained.

The network broke down at the end of a wet period in the continent’s history.

This was at a time when rainfall in East Africa fell sharply as a tropical rain belt moved south.

This led to more rainfall around the Zambezi River, which may have caused floods that disrupted the network.

Lead study author Dr Jennifer Miller said humans are social creatures, but little is known about when, how, and why different populations connected.

‘Answering these questions is crucial for interpreting the biological and cultural diversity that we see in human populations today,’ she said.

While DNA is a powerful tool for understanding genetic interactions between populations of humans, it doesn’t address cultural exchanges.

They are the world’s oldest manufactured ornaments, meaning instead of relying on an item’s natural size or shape, humans transformed the shells to produce beads.

This extensive shaping creates ample opportunities for variations in style.

‘It’s like following a trail of breadcrumbs,’ explained Dr Miller, with tiny beads presenting clues ‘scattered across time and space, just waiting to be noticed.’ 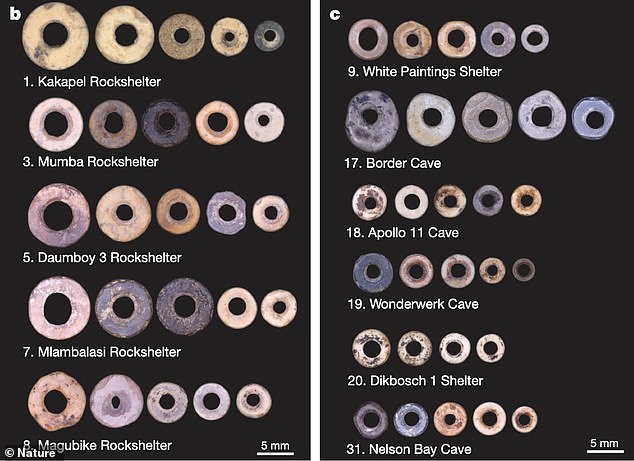 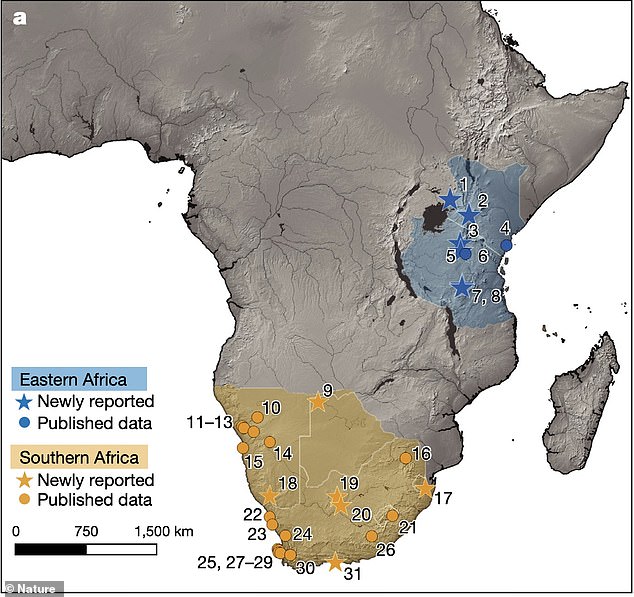 They ‘have the power to reveal big stories about our past,’ she explained.

The German team are encouraging other researchers to build on the database they created, and continue exploring evidence of cultural connections in new regions.

‘Through this combination of paleo-environmental proxies, climate models, and archaeological data, we can see the connection between climate change and cultural behaviour.’

The findings were published in the journal Nature.

WHAT DO WE KNOW ABOUT THE HISTORY OF THE STONE AGE?

The Stone Age is a period in human prehistory distinguished by the original development of stone tools that covers more than 95 per cent of human technological prehistory.

It begins with the earliest known use of stone tools by hominins, ancient ancestors to humans, during the Old Stone Age – beginning around 3.3 million years ago.

Between roughly 400,000 and 200,000 years ago, the pace of innovation in stone technology began to accelerate very slightly, a period known as the Middle Stone Age.

By the beginning of this time, handaxes were made with exquisite craftsmanship. This eventually gave way to smaller, more diverse toolkits, with an emphasis on flake tools rather than larger core tools.

The Stone Age is a period in human prehistory distinguished by the original development of stone tools that covers more than 95 per cent of human technological prehistory. This image shows neolithic jadeitite axes from the Museum of Toulouse

During the Later Stone Age the pace of innovations rose and the level of craftsmanship increased.

Groups of Homo sapiens experimented with diverse raw materials, including bone, ivory, and antler, as well as stone.

The period, between 50,000 and 39,000 years ago, is also associated with the advent of modern human behaviour in Africa.

Different groups sought their own distinct cultural identity and adopted their own ways of making things.

Later Stone Age peoples and their technologies spread out of Africa over the next several thousand years.