His breakthrough helped millions get their results quickly in the early days of the pandemic, when tests were scarce and lines were long. 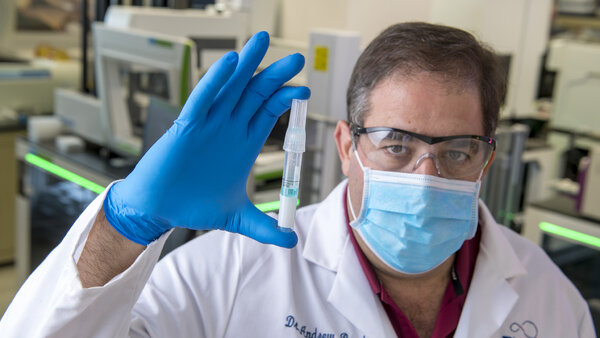 Andrew Brooks, a research professor at Rutgers University who developed the first saliva test for Covid-19, died on Jan. 23 in Manhattan. He was 51.

The cause was a heart attack, his sister, Janet Green, said.

In April 2020, when Covid tests were scarce and lines to get them were long, Dr. Brooks made worldwide news when the Food and Drug Administration gave emergency approval to his technique, which promised to radically increase the speed and safety of the testing process.

“Instead of having a naso- or oropharyngeal swab that’s placed in your nose or the back of your throat, you simply have to spit in a tube,” he told Bill Hemmer of Fox News adding, “It doesn’t require a health care worker to collect it, six inches away from an infected person.”

In the 10 months since Dr. Brooks received approval, health care workers have performed more than four million tests using his approach, and it remains one of the most reliable means of determining whether someone has Covid.

In a statement after Dr. Brooks’s death, Gov. Phil Murphy of New Jersey called him “one of the state’s unsung heroes” who “undoubtedly saved lives.”

Andrew Ira Brooks was born on Feb. 10, 1969, in Bronxville, N.Y. His father, Perry H. Brooks, was a diamond setter. His mother, Phyllis (Heitner) Brooks, was a teacher.

In addition to his sister, he is survived by his mother; his wife, Jil (Larsen) Brooks, and three daughters, Lauren, Hannah and Danielle. His first two marriages ended in divorce.

Dr. Brooks grew up in Old Bridge, N.J., where he earned spending money by performing magic shows at birthday parties. Though he was adept at tricks involving doves and rabbits, his real forte was close up handwork, especially card tricks.

He played varsity golf at Cornell, where he initially planned to become a veterinarian, and majored in animal sciences. But after a summer internship at the Memorial Sloan Kettering Cancer Center in Manhattan, he became fascinated with the study of human disease. He received a doctorate in microbiology and immunology from the University of Rochester in 2000.

After working at the University of Rochester Medical Center for four years, he returned to New Jersey to take a job at Rutgers, and in 2009 joined its Cell and DNA Repository, a university-owned company that provides data management and analysis for biological research.

Dr. Brooks became the company’s chief operating officer, and discovered he had a flair for the business side of science. He grew the company from just a few dozen employees to nearly 250, working with nearly every major pharmaceutical company, among other clients.

Words to Know About Testing

Confused by the terms about coronavirus testing? Let us help: