Hole in the ozone layer that develops annually is ‘rather larger than usual’ this year – and is currently bigger than Antarctica, scientists say

The annual hole in the Earth’s protective ozone layer that appears over the Southern Hemisphere is ‘rather larger than usual’ — and is currently bigger than Antarctica.

Acting like a shield, ozone absorbs UV light from the sun. Its absence means more of this high-energy radiation reaches the Earth, where it can harm living cells.

The ozone layer is depleted by chemical reactions, driven by solar energy, that involve the by-products of human-made chemicals that linger in the atmosphere.

Each year, this causes a hole to form over the south pole between August and October — the southern hemisphere summer — peaking at the start of October.

The size of the hole is strongly dependant on weather conditions. Cold conditions last year saw one of the largest on record, while 2019’s was the smallest.

Following an average start this year, the hole has grown considerably in the last week, the European Union’s Copernicus Atmosphere Monitoring Service said.

In years with normal weather conditions, the hole typically grows to a maximum area of about 8 million square miles (20.7 million square kilometres).

Despite these natural fluctuations, experts expect the hole to close permanently by 2050, in response to restrictions on ozone-depleting chemicals introduced in 1987. 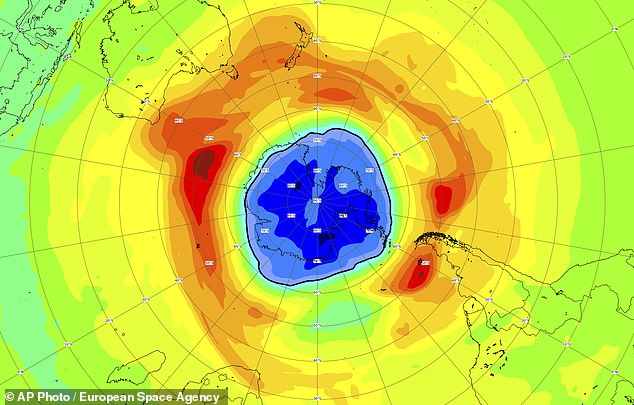 The annual hole in the Earth’s protective ozone layer that appears over the Southern Hemisphere is ‘rather larger than usual’ — and is currently bigger than Antarctica. Pictured: a map of the ozone hole over Antarctica as seen on September 16, 2020

The size of the ozone hole is strongly dependant on weather conditions. Cold conditions last year (blue) saw one of the largest on record, while 2019’s (green) was the smallest. This year’s dimensions are depicted above in red

Most ozone-monitoring satellites provide a value for the amount of ozone in a column of air going from the ground to the limits of the atmosphere.

To gain a fuller picture, however, profiles that show concentrations of ozone levels at different altitudes along these columns are also needed.

The ESA’s ALTIUS (Atmospheric Limb Tracker for Investigation of the Upcoming Stratosphere) mission, scheduled to launch in 2025, will help in this regard.

ALTIUS is capable of observing ozone ‘side-on’, allowing it to provide a vertical profile of atmospheric ozone concentrations — along with other compounds including nitrogen dioxide, water vapour and aerosols.

This data will help not only monitor the status of the ozone layer but also improve weather forecasting and the monitoring of long-term trends.

‘Forecasts show that this year’s hole has evolved into a rather larger than usual one,’ Copernicus Atmosphere Monitoring Service head Vincent-Henri Peuch said.

‘We are looking at a quite big and potentially also deep ozone hole.’

According to Dr Peuch, the ozone hole that was observed last year also started out unremarkably, but proceeded to turn into one of the longest-lasting manifestations of the phenomenon on record.

In fact, measurements from the Copernicus Sentinel-5P satellite revealed that last year’s hole was also one of the largest and deepest of recent years, reaching around 9.7 million square miles (25 million square kilometres) in total area.

According to the European Space Agency, last year’s hole was driven by a ‘strong, stable and cold polar vortex’ which consistently lowered the temperature of the ozone layer over Antarctica.

The evolution of this year’s ozone hole appears to be progressing along a similar track, with it presently being larger for this time of the season than 75 per cent of holes since 1979.

‘This ozone evolution is what we would expect given the current atmospheric conditions,’ said European Centre for Medium-Range Weather Forecasts senior scientist Antje Inness.

‘The progress of the ozone hole over the coming weeks will be extremely interesting.’

This year, Dr Peuch added, ‘the vortex is quite stable and the stratospheric temperatures are even lower than last year — so [the ozone hole] may continue to grow slightly over the next two or three weeks.’

They are used in the manufacture of aerosol sprays, blowing agents for foams and packing materials, as solvents, and as refrigerants.

CFCs are classified as halocarbons, a class of compounds that contain atoms of carbon and halogen atoms.

Individual CFC molecules are labelled with a unique numbering system.

For example, the CFC number of 11 indicates the number of atoms of carbon, hydrogen, fluorine, and chlorine.

Whereas CFCs are safe to use in most applications and are inert in the lower atmosphere, they do undergo significant reaction in the upper atmosphere or stratosphere where they cause damage.

‘The monitoring of the ozone hole over the South Pole must be interpreted carefully as the size, duration and the ozone concentrations of a single hole are influenced by the local wind fields, or meteorology, around the South Pole.

‘Nevertheless, we expect a closing of the ozone hole over the South Pole by the year 2050.’

The depletion of the ozone layer was first detected by scientists in the 1970s, and was determined to be greater than could be accounted for by natural factors like temperature, weather and volcanic eruptions.

Instead, it was determined that human-made chemicals — in particular halocarbons refrigerants and chlorofluorocarbons (CFCs) — were exacerbating the depletion.

In 1987, these manufacture and consumption of these products began to be phased out under an international treaty known as the Montreal Protocol.

However, the fact that many ozone-depleting substances can stay up in the stratosphere for decades means the ozone layer’s recovery is very slow process.

In fact, experts have predicted that it will take until the 2060s before the harmful substances used in refrigerants and spray cans have completely disappeared from the atmosphere. 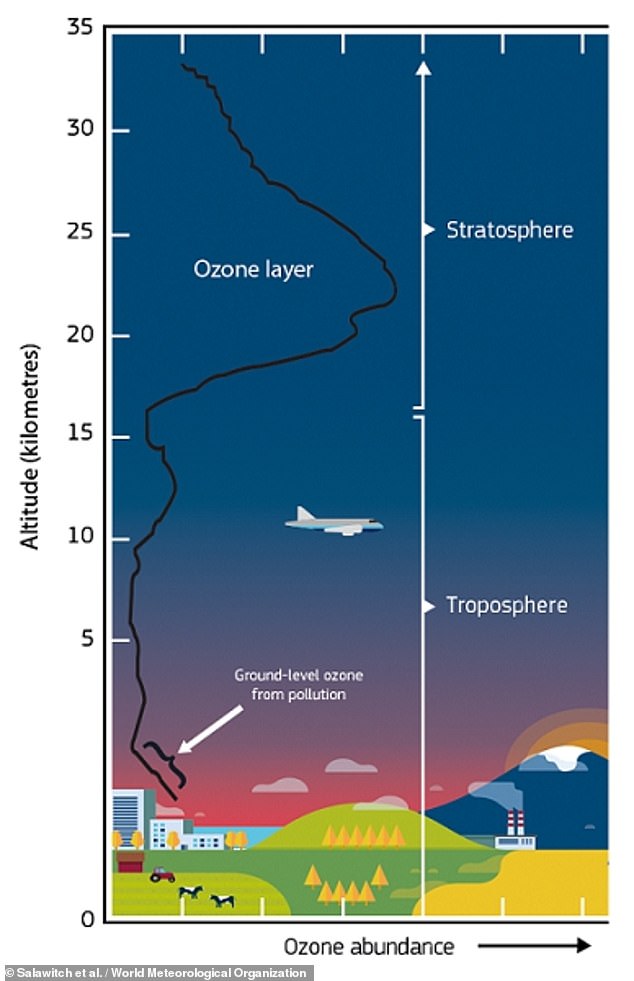 Acting like a shield, ozone absorbs UV light from the sun. Its absence means more of this high-energy radiation reaches the Earth, where it can harm living cells. The ozone layer is depleted by chemical reactions, driven by solar energy, that involve the by-products of human-made chemicals that linger in the atmosphere. Pictured: ozone levels vary with altitude

Ozone is a molecule comprised of three oxygen atoms that occurs naturally in small amounts.

In the stratosphere, roughly seven to 25 miles above Earth’s surface, the ozone layer acts like sunscreen, shielding the planet from potentially harmful ultraviolet radiation that can cause skin cancer and cataracts, suppress immune systems and also damage plants.

It is produced in tropical latitudes and distributed around the globe.

Closer to the ground, ozone can also be created by photochemical reactions between the sun and pollution from vehicle emissions and other sources, forming harmful smog.

Although warmer-than-average stratospheric weather conditions have reduced ozone depletion during the past two years, the current ozone hole area is still large compared to the 1980s, when the depletion of the ozone layer above Antarctica was first detected.

In the stratosphere, roughly seven to 25 miles above Earth’s surface, the ozone layer acts like sunscreen, shielding the planet from potentially harmful ultraviolet radiation

This is because levels of ozone-depleting substances like chlorine and bromine remain high enough to produce significant ozone loss.

In the 1970s, it was recognised that chemicals called CFCs, used for example in refrigeration and aerosols, were destroying ozone in the stratosphere.

In 1987, the Montreal Protocol was agreed, which led to the phase-out of CFCs and, recently, the first signs of recovery of the Antarctic ozone layer.

The upper stratosphere at lower latitudes is also showing clear signs of recovery, proving the Montreal Protocol is working well.

But the new study, published in Atmospheric Chemistry and Physics, found it is likely not recovering at latitudes between 60°N and 60°S (London is at 51°N).

The cause is not certain but the researchers believe it is possible climate change is altering the pattern of atmospheric circulation – causing more ozone to be carried away from the tropics.

They say another possibility is that very short-lived substances (VSLSs), which contain chlorine and bromine, could be destroying ozone in the lower stratosphere.

VSLSs include chemicals used as solvents, paint strippers, and as degreasing agents.

One is even used in the production of an ozone-friendly replacement for CFCs.