Home » Science » 'Apple Computer A' prototype goes up for auction

Steve Jobs’s original ‘Apple Computer A’ prototype that was hand-soldered by Steve Wozniak in 1976 goes up for auction – with an expected sale price of $500,000

‘Apple Computer A’, the prototype for the tech giant’s first ever computer, is up for sale – and could sell for more than half a million dollars at auction.

Considered ‘lost’ until recently, the prototype was hand-soldered by Apple co-founder Steve Wozniak in 1976, the year the company was established.

The ‘rare’ and ‘historic’ item is essentially a circuit board covered in chips and wires, embossed with the words ‘Apple Computer A ©76’.

It was a prototype for the Apple-1, the firm’s first ever product, which was sold as an assembled circuit board and lacked basic features such as a keyboard or monitor.

The prototype is now being sold off by RR Auction, an auction house based in Boston. 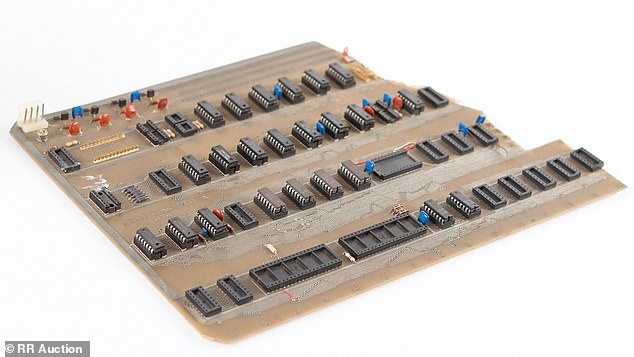 ‘Apple Computer A’, the prototype for the tech giant’s first ever computer, is up for sale – and could sell for more than half a million dollars at auction. Considered ‘lost’ until recently, the prototype was hand-soldered by Apple co-founder Steve Wozniak in 1976 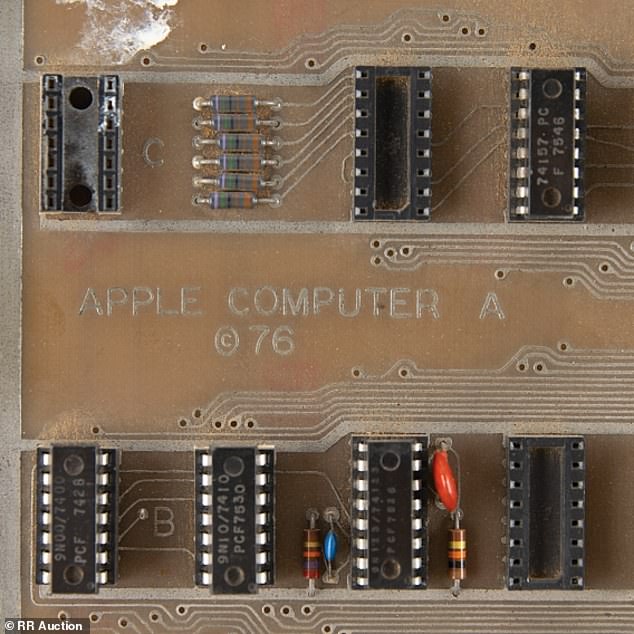 The ‘rare’ and ‘historic’ item is essentially a circuit board covered in chips and wires, embossed with the words ‘Apple Computer A ©76’ 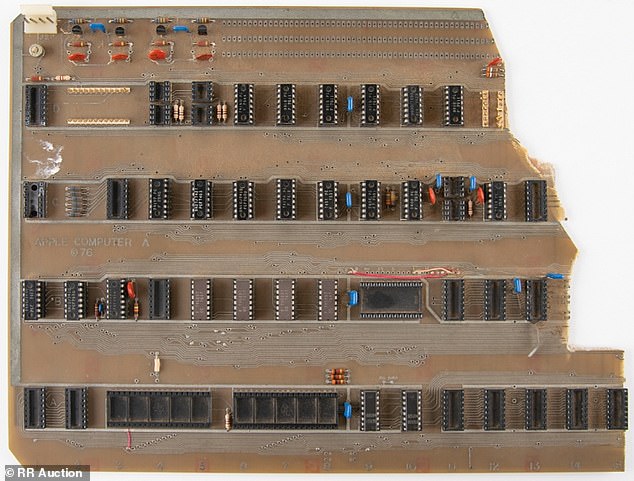 RR Auction said the item is damaged, due to ‘pressure on the upper right’ resulting in ‘a crack’, although photos show the the entire right-hand corner is missing

WHAT IS THE APPLE-1?

Steve Jobs and Steve Wozniak created the Apple-1 computer in 1976 and presented it at a computer club in Palo Alto. However, there were few takers at the time.

Paul Terrell, owner of a retail chain called Byte Shop, placed an order for 50 of the machines and sold them for $666.66 (£420) retail – once Wozniak and Jobs agreed to assemble the circuit boards rather than offer them as kits.

The usual price tag is believed to have been chosen because Wozniak liked repeating digits.

Wozniak and Jobs hand-crafted 150 more Apple-1 machines and sold them to friends and other vendors.

Fewer than 50 original Apple-1s are believed to have survived, with only eight known to be in working condition.

The Apple 1 did not have a keyboard or monitor, meaning users had to supply their own before they were able to use the computer. It also had a tiny 8K memory – tiny by today’s standards.

Jobs sent them direct to buyers from the garage of his parents’ house, now known a ‘Apple Garage’.

‘Few Apple artifacts could be considered as rare, early, or historic as this Apple-1 prototype,’ said RR Auction on the item’s page listing.

‘It is the perfect embodiment of the symbiosis between Steve Jobs, Steve Wozniak, and Silicon Valley – the brilliant businessman, the electronics Einstein, and the infrastructure in which they thrived.’

RR Auction said the item is damaged, due to ‘pressure on the upper right’ resulting in ‘a crack’, although photos show the entire right-hand corner is missing.

The missing piece is presumed to have been discarded. A Polaroid photo from 1976, provided by RR Auction, shows the complete board.

Integrated circuits, microprocessors and other components have been plucked from their sockets, presumably for use on early production Apple-1 computers.

RR Auction said the prototype has been examined and authenticated this year by Apple-1 expert Corey Cohen, who has produced a 13-page report on the item.

It was back in 1976 that Jobs and Wozniak created the Apple-1 computer and presented it at a computer club in Palo Alto, California.

The prototype had been hand-soldered by Wozniak, who used a ‘three handed’ technique – wire in one hand, soldering iron in the other, and solder held in his mouth.

Jobs then used the prototype to demonstrate the Apple-1 to Paul Terrell, owner of The Byte Shop in Mountain View, California, one of the first personal computer stores in the world.

Jobs and Wozniak had conceived it as part of a $40 do-it-yourself kit for hobbyists, but at Terrell’s request it became a fully assembled personal computer.

Terrell made a purchase order for fifty Apple-1s, which Wozniak later called ‘the biggest single episode in all of the company’s history’.

‘Nothing in subsequent years was so great and so unexpected,’ the co-founder said.

In all, only 200 Apple-1 computers were made before the product was discontinued the following year, 175 of which were sold.

Introductory advertisement for the Apple-1 computer. Apple-1 was sold as an assembled circuit board and lacked basic features such as a keyboard or monitor

This prototype resided in the ‘Apple Garage’ – the garage at the childhood home of Steve Jobs that was a hangout for the founders of Apple – for many years before being given by Steve Jobs to its current owner about 30 years ago.

At that time, Jobs had been ousted from Apple and was leading another computer company that he had set up, NeXT.

Jobs of course went on to rejoin Apple in 1996 and led the company through its most successful period, overseeing the release of the iMac G3, the iPod, the iPhone and much more.