Home » Science » Apples: Mathematical analysis reveals how the apple gets its shape

How the apple gets its shape: Mathematical analysis reveals different rates of growth between the bulk and the stalk, resulting in the fruit’s dimple-like cusp

The apple gets its ‘dimple-like cusp’ and shape as a result of different rates of growth between the bulk and the stalk, according to a new mathematical study of the fruit.

Apples are relatively spherical apart from the dimple at the top, according to a team from Harvard University in Cambridge Massachusetts, who set out to see if they could understand, mathematically, why the fruit has this unusual form factor.

They turned to a gel that can adapt its shape over time, to replicate the way an apple grows, and compared it to the growth of real apples from an orchard.

Combining this with mathematical models revealed that the underlying fruit anatomy, the way it grows at different rates, and mechanical instability, play joint roles in the rise of the dimple, bottom ridges and general shape of the fruit.

Apples are relatively spherical apart from the dimple at the top, according to a team from Harvard University in Cambridge Massachusetts, who set out to see if they could understand, mathematically, why the fruit has this unusual form factor 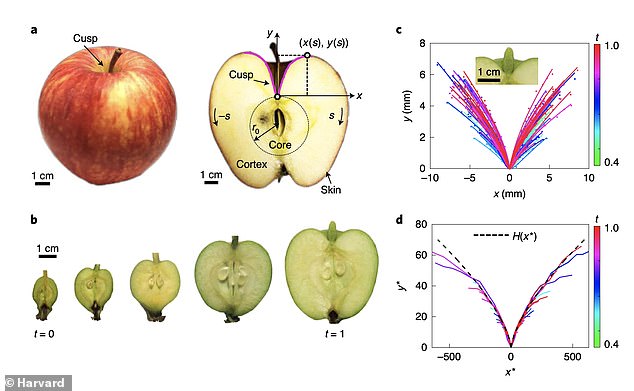 Mathematical models revealed that the underlying fruit anatomy, the way it grows at different rates, and mechanical instability, play joint roles in the rise of the dimple, bottom ridges and general shape of the fruit

The evolution of the apple

They have been grown for fruit for thousands of years in Asia and Europe and taken to North America by European colonists.

An apple tree grown from seed tends to be very different from its parents, and often produces fruit different to that desired by the grower.

So for generations apple cultivars are used by grafting on to rootstocks.

These rootsocks allow for the control of growth speed and the resulting size of the tree, making harvesting easier.

There are over 7,500 known cultivars of apples, with different ones bred for different tastes and uses – from cooking to eating.

Worldwide production of apples in 2018 was 86 million tonnes.

The research team began by collecting apples at various growth stages from an orchard at Peterhouse College at the University of Cambridge in the UK.

They then worked to map the growth of the dimple over time by measuring the different growth stages.

Dr Lakshminarayanan Mahadevan, the lead author of the study, had already developed a simple theory to explain the form and growth of apples, but the project began to bear fruit when the researchers were able to connect observations of real apples at different growth stages.

‘Biological shapes are often organised by the presence of structures that serve as focal points,’ he said.

To understand the evolution of the shape of the apple and the cusp, the researchers turned to a long-standing mathematical theory known as singularity theory.

Singularity theory is used to describe a host of different phenomena, from black holes, to more mundane examples such as the light patterns at the bottom of a swimming pool, droplet breakup and crack propagation.

‘These focal points can sometimes take the form of singularities where deformations are localised,’ said Mahadevan, adding ‘a ubiquitous example is seen in the cusp of an apple, the inward dimple where the stalk meets the fruit.’

The team suggests  the ‘singularity’ in this case is a slight alteration in the speed of growth around the stalk, compared to other parts of the apple – creating a dimple.

‘What is exciting about singularities is that they are universal,’ said co-lead author on this paper, Thomas Michaels, from University College London.

‘The apple cusp has nothing in common with light patterns in a swimming pool, or a droplet breaking off from a column of water, yet it makes the same shape as they do.

‘The concept of universality goes very deep and can be very useful because it connects singular phenomena observed in very different physical systems.’

Building from this, the team used numerical simulation to understand how differential growth between the fruit cortex and the core drives formation of the cusp.

Plain view and cross-section from simulations of apple growth, showing temporal evolution of the compressive stresses around the central stalk region, which are responsible for the formation of the multiple cusps

WHAT IS SINGULARITY THEORY?

A singularity is a point at which a given mathematical object is not defined.

It is also a point where the mathematical object stops being well-behaved in some particular way.

This could be the point where it is lacking differentiability or analyticity – is different or not holding true to expected findings.

Singularities arise naturally in a huge number of different areas of mathematics and science, according to the Isaac Newton Institute.

‘As a consequence Singularity Theory lies at the crossroads of the paths connecting the most important areas of applications of mathematics with its most abstract parts.’

‘In general, a singularity is a point at which an equation blows up or becomes degenerate,’ WolframMathWorld explains.

‘Singularities are extremely important in complex analysis, where they characterise the possible behaviours of analytic functions.’

They then corroborated the simulations with experiments which mimicked the growth of apples using gel that swelled over time.

The experiments showed that different rates of growth between the bulk of the apple and the stalk region resulted in the dimple-like cusp.

‘Being able to control and replay morphogenesis – or shape growth – of singular cusps in the laboratory with simple material toolkits was particularly exciting,’ said Aditi Chakrabarti, co-author of the paper, referring to the gel.

‘Varying the geometry and composition of the gel mimics showed how multiple cusps form.’

These changes and cusp forms are ‘seen in some apples and other drupes, such as peaches, apricots, cherries and plums,’ he added.

The team found that the underlying fruit anatomy, along with mechanical instability, may play joint roles in giving rise to multiple cusps in all similar fruits.

‘Morphogenesis, literally the origin of shape, is one of the grand questions in biology,’ said Mahadevan.

‘The shape of the humble apple has allowed us to probe some physical aspects of a biological singularity.

‘Of course, we now need to understand the molecular and cellular mechanisms behind the formation of the cusp, as we move slowly towards a broader theory of biological shape.’

The authors say future work will need to explore the nature and dynamics of the molecular signals triggering the inhibition of growth near the stalk.

They also want to look at the mechanisms linking cell number, cell size and cell shape to tissue changes in the fruit.

The findings have been published in the journal Nature Physics.

The ultimate egg-quation! Scientists develop a universal formula for the shape of any bird’s EGG – in breakthrough that could shed light on how and why they evolved

A ‘universal formula’ to describe the shape of any bird’s egg has been created by scientists, who say it could one day shed light on why and how eggs first evolved.

Egg-shape has long attracted the attention of mathematicians, engineers, and biologists, as it is regarded as the ‘perfect shape’ for its intended purpose, according to the team behind the new formula at the University of Kent, in Canterbury.

The ‘perfect shape’ claim comes from the fact it is large enough to incubate an embryo, small enough to exit the body efficiently, and not roll away once laid.

The new formula for egg shape is based on four parameters: egg length, maximum breadth, shift of the vertical axis, and the diameter at one quarter of the egg length.

It can be applied across different disciplines, especially in the food and poultry industry, and will lead to future investigations inspired by the egg, the team said.